Creating a National Science Foundation directorate focused on emerging technologies was a principal driver behind the competitiveness legislation that ultimately became the CHIPS and Science Act. Early this year, before the act was finalized, NSF established a corresponding Directorate for Technology, Innovation, and Partnerships (TIP) after receiving a green light from congressional appropriators, but many questions remained over its exact size and mission.

The CHIPS and Science Act gives the directorate a three-fold mission: supporting “use-inspired and translational research,” accelerating development of key technologies, and expanding the domestic STEM workforce. The act also lists specific technology areas and national challenges to be addressed by the directorate and sets a goal of appropriating $16.3 billion to it over five years.

In addition, the act instructs the directorate to pursue a range of activities, including initiatives to seed regional innovation clusters, support technology development test beds, and promote entrepreneurial training. The directorate has already begun to implement some activities, but its ability to fully realize the goals outlined in the act will ultimately hinge on future congressional appropriations.

The CHIPS and Science Act’s TIP Directorate provisions are the product of two years of debate over how to improve U.S. R&D competitiveness globally.

Lawmakers generally agreed NSF should take a larger role in supporting use-inspired research to address societal and technological goals, but there was divergence between the House and Senate over how the idea should be implemented. Senators, motivated primarily by competition with China, focused on supporting research tied to strategic technologies. By contrast, the House sought to protect NSF’s traditional focus on fundamental research while also advocating for the directorate to address broad societal and economic needs.

Adapting a list first proposed by the House, the act also lays out five initial “societal, national, and geostrategic challenges” faced by the U.S.:

Within funding for the TIP Directorate, the act sets a target budget of $1 billion over five years for R&D grants in the technology and challenge areas. This includes using existing small-business programs for making short-term technology deployment awards. When making the awards, NSF must assess the “novelty and risk” of the proposed projects, any “ethical, societal, safety, and security implications,” appropriate evaluation metrics, and, when relevant, commercialization pathways.

The NSF director is required to annually review the technology and challenge area lists and update them as necessary after evaluating technology trends and societal challenges in coordination with the National Science Board and a new interagency working group.

The working group is broadly tasked with coordinating federal support for work in the key technology focus areas, across the government. Outside NSF, the act recommends the Department of Energy receive $11.2 billion over four years to fund complementary R&D in the areas, and it authorizes a new Commerce Department program to spur regional technology development hubs that are focused on the same areas.

The act also mandates that the White House quadrennially assemble a National Science and Technology Strategy that must, among other requirements, identify research priorities to advance the technology areas.

In 2019, when Sen. Chuck Schumer (D-NY) first floated the idea of reforming NSF to bolster U.S. technological competitiveness, he proposed spending $100 billion over five years, which would have far outstripped the agency’s current annual budget of $8.8 billion. The bill the Senate eventually passed proposed $29 billion over five years to fund a new NSF directorate, whereas the corresponding House proposal was about $13 billion, with additional funding increases recommended for existing NSF programs.

The final numbers in the CHIPS and Science Act landed closer to the House proposal, recommending $16.3 billion for the TIP Directorate over five years. Congress still must provide funding through annual appropriations, though, and a lobbying campaign is underway to persuade lawmakers to meet the act’s fiscal year 2023 funding targets when they finalize the year’s spending legislation.

NSF’s current spending plans for the directorate are well below the act’s annual targets, which begin at $1.5 billion in fiscal year 2023 and rise to $4.1 billion in fiscal year 2027. By comparison, NSF budgeted $450 million for fiscal year 2022, which was mainly for existing programs transferred from other parts of the agency, such as the Convergence Accelerator, Small Business Innovation Research grants, and the I-Corps entrepreneurial education program.

The Biden administration has requested that Congress provide the directorate $880 million in fiscal year 2023. Appropriators have not proposed specific amounts for the directorate for fiscal year 2023, but pending House and Senate proposals for NSF overall are below the request and could be adjusted downward in the final negotiations.

Beyond funding for R&D grants, the CHIPS and Science Act also outlines a series of new innovation initiatives the TIP Directorate should support alongside established NSF programs that have complementary goals.

Translation Accelerators and Regional Engines. The act recommends Congress appropriate a combined $6.5 billion over five years for “Regional Innovation Engines” and “Translation Accelerators” without specifying how the funding should be split. The Engines are intended to be coalitions of institutions that advance use-inspired research in key technology focus areas, meet societal and economic challenges, leverage expertise from a wide array of partners, and support STEM education, all within a particular geographic region. The Translation Accelerators are to comprise partnerships of two or more types of entities that “further the research, development, and commercialization of innovation in the key technology focus areas,” with non-federal partners pitching in at least 25% of the costs.

NSF has picked the Engines program as the first flagship initiative for the directorate, proposing to fund up to 10 Engines with $200 million of the directorate’s requested budget for fiscal year 2023. National Science Board Chair Dan Reed and member Darío Gil recently wrote in an op-ed that funding one-quarter of the Engine proposals NSF received over the summer would require $400 million for the year. The administration has not yet requested funds specifically to establish the Accelerators and the act does not specify a target number of them, but it encourages NSF to seek a balance between the number of Engines and Accelerators.

Expansion of Partnerships for Innovation program. The act recommends NSF’s existing Partnerships for Innovation program be allocated $3.1 billion over five years, funding awards that are each worth up to $1 million annually. Authorized uses of funds include identifying research with commercialization potential, hiring technology transfer professionals, offsetting patenting and licensing costs, holding entrepreneurship competitions, and supporting relevant professional development opportunities. Eligible institutions are individual institutions of higher education, including community colleges, and certain university-based nonprofit organizations engaged in technology development, as well as consortia that include either type of institution as the lead recipient.

Test beds. NSF is directed to make awards for technology test beds in coordination with other relevant federal agencies, including DOE and the National Institute of Standards and Technology. Testbed awards may include fabrication facilities and cyberinfrastructure, and are intended to advance the development, operation, integration, deployment, and demonstration of “new, innovative critical technologies,” including both hardware and software.

Entrepreneurial fellowships. NSF is instructed to support a new early-career fellowships program to “develop leaders capable of maturing promising ideas and technologies from lab to market,” as well as to forge connections between academic research and end users. The program has a target five-year budget of $125 million and is to recruit applicants from a diverse range of research institutions across all regions of the country and from groups historically underrepresented in STEM fields.

Centers for Transformative Education Research and Translation.. NSF is also directed to fund multidisciplinary centers supporting the implementation of STEM education innovations on a broad scale. The program will focus on under-resourced schools and learners from pre-kindergarten through high school in low-resource or underachieving educational agencies in urban and rural communities.

Scholarships and fellowships. Another focus of the directorate is to fund undergraduate scholarships, graduate fellowships and traineeships, and postdoctoral awards in the key technology areas, including a dedicated program for low-income students. The awards are in part intended to increase the participation of populations that are underrepresented in STEM, expand opportunities with industry, and boost community college-level STEM programs focused on underserved populations. 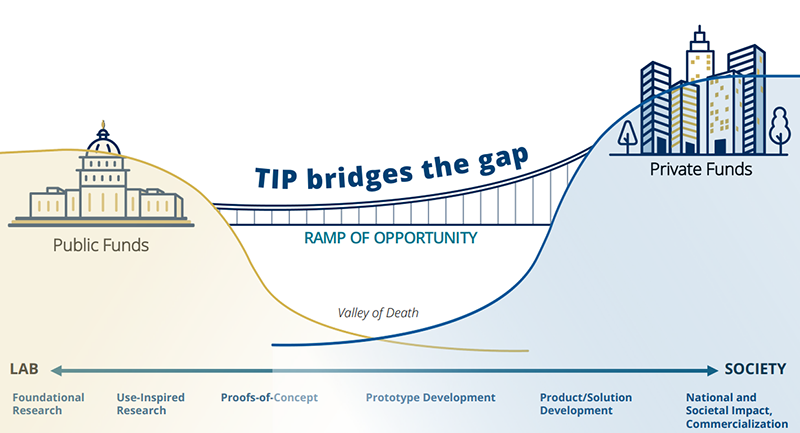 A graphic used in a presentation by NSF TIP Directorate head Erwin Gianchandani, illustrating the directorate’s focus on bridging the gap between research and practical concerns. (Image credit – NSF)

In supporting use-inspired research, TIP Directorate programs will build on recent NSF efforts that seek to bridge the agency’s traditional focus on basic research with a focus on practical problem-solving. Examples of existing efforts include the Convergence Accelerator program and National Artificial Intelligence Research Institutes.

The solicitation for the AI institutes specifically explained, “We use the phrase ‘use-inspired’ rather than ‘applied’ to emphasize that this solicitation seeks to support work that goes beyond merely applying known techniques and adds new knowledge and understanding in both foundational AI and use-inspired domains.”

TIP Directorate Head Erwin Gianchandani likewise discussed the “use-inspired” outlook in a recent speech, arguing it is increasingly important to “think about the users, the beneficiaries, the consumers of the research that we're trying to support, and have them engage with researchers and students from the start in shaping and conducting their research.”

Although its funding is still limited, the directorate has also begun to establish new programs beyond the marquee Engines initiative.

Among them are an Entrepreneurial Fellowships competition, a partnership with the nonprofit organization Activate.org, which previously launched the Cyclotron Road program that embeds entrepreneurs at Berkeley Lab.

Another is the Experiential Learning for Emerging and Novel Technologies (ExLENT) program, a partnership with NSF’s STEM Education Directorate that aims to spur practical learning opportunities for individuals at various career stages. The program plans to make between 25 and 35 awards, each worth up to $1 million over three years, to promote partnerships between organizations in emerging technology fields and those with expertise in workforce development.

The directorate also recently awarded 25 grants worth a combined total of $8 million under a new Pathways to Enable Open-Source Ecosystems (POSE) program. While the open-source model is common in software development, POSE aims to extend it across a range of fields by funding organizations capable of managing the necessary infrastructure. The first projects funded by POSE include initiatives in materials science research, renewable energy adoption, natural hazards, and health informatics, among other areas.

It is expected that NSF will roll out additional TIP use-inspired programs and initiatives in response to the CHIPS and Science Act once Congress finalizes its appropriations for fiscal year 2023.