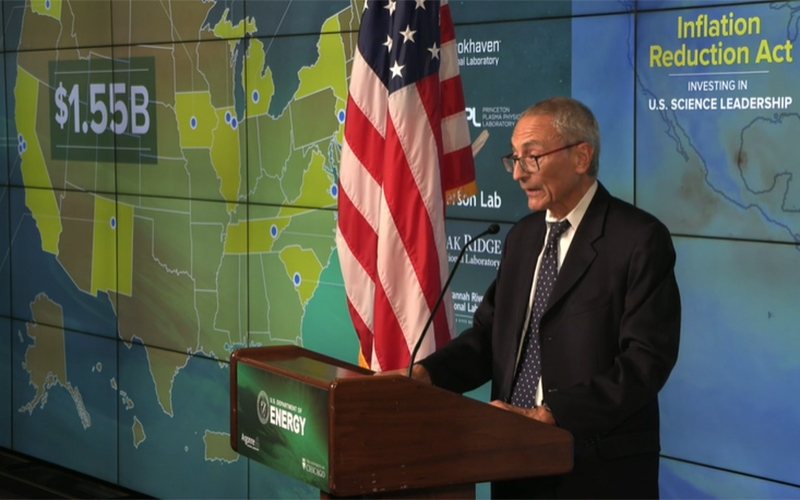 In a familiar turn of events, fiscal year 2023 has begun with most science programs operating on stopgap funding that extends previous budget levels until Congress passes appropriations legislation for the full year. Democrats have already advanced bills that would boost budgets across most science programs, as detailed in FYI’s Federal Science Budget Tracker. However, many proposed increases are apt to be pared back, as they were last year, after Democrats and Republicans negotiate an agreement on overarching federal spending levels.

Unlike last year, looming over those negotiations is the CHIPS and Science Act, which sets budget targets for the National Science Foundation, Department of Energy Office of Science, and National Institute of Standards and Technology that are much higher than the Democrats’ proposed appropriations. Although the targets have bipartisan buy-in, congressional leaders have offered few hints of whether they will press to meet them quickly, and Congress could well defer any increases to fiscal year 2024 or even abandon the targets altogether.

Meanwhile, a number of programs are insulated from the vagaries of the appropriations process because they are already funded through the Infrastructure Investment and Jobs Act, Inflation Reduction Act, or the semiconductor provisions of the CHIPS and Science Act. In some cases, the influx of money is so large that agencies are now scrambling to set up the administrative apparatuses they will need to handle it.

DOE and NIST adjusting to flood of project funding

DOE will receive around $25 billion through the infrastructure law for technology demonstration initiatives. Fiscal year 2023 is the second of six years the funding is spread across, with much of it set to be obligated during the earlier part of that period.

The department is already well into funding two large-scale demonstrations of nuclear reactor technologies that together are expected to cost the department $3.2 billion, drawn largely from infrastructure law money. It also recently announced its first new technology awards under the law, $2.8 billion for 21 projects in battery manufacturing and recycling, and it is gearing up to make further large-scale awards, including billions of dollars to support “hubs” for hydrogen production and capturing carbon dioxide from the atmosphere.

To administer this funding, DOE created an “infrastructure” branch of its organization and President Biden has nominated former energy industry CEO David Crane to oversee it. Awaiting Senate confirmation, Crane is currently serving within that branch as director of the new Office of Clean Energy Demonstrations, a position not requiring confirmation. DOE is also hiring in the range of 1,000 employees to staff what it is calling a “Clean Energy Corps.”

The Inflation Reduction Act is further transforming DOE, including by multiplying the loan authority of the Loan Programs Office. In addition, DOE labs are receiving $2 billion, over $1.5 billion of which is for labs overseen by the Office of Science. While that is only a small amount of the total provided by the act, the funding will alleviate strain on budgets for science facility and major equipment projects and contribute to the refurbishment of laboratory infrastructure.

Today, the Office of Science released a list of the 52 projects receiving shares of the total. Speaking at a press roundtable last week, office director Asmeret Asefaw Berhe said the money will be “incredibly helpful” and is going to projects where it will deliver “the most bang for our buck.” She also stressed, “We still need a lot more resources for all these projects, ones that are ongoing, ones that are planning to start.”

Much as DOE is being transformed by the infrastructure law and the Inflation Reduction Act, NIST has been assigned the enormous responsibility of stewarding the semiconductor initiatives funded by the CHIPS and Science Act.

Speaking last week at an advisory panel meeting, NIST Director Laurie Locascio related that the money is changing how NIST and the Commerce Department operate. “This is a $50 billion program on top of an $11 billion department on top of a $1.4 billion agency. … We need to make sure the total organization is healthy while we’re managing this very large and disruptive program,” she remarked.

Of the total, $39 billion is for semiconductor manufacturing initiatives that will be administered by a CHIPS Program Office led by former Treasury Department official Mike Schmidt. The remainder will be overseen by a CHIPS R&D office led on an interim basis by Eric Lin, on detail from his position as head of NIST’s Material Measurement Laboratory.

Lin observed at the meeting that the funding is also spurring self-organization among its potential recipients, saying, “We’ve heard from our Industrial Advisory Committee members that fierce competitors are sitting down together and wondering what they could do together. Now, they didn’t get as far as deciding what to do, but the fact that they are having conversations and creating space for that bodes well, if we are able to execute well to take advantage of that energy.” 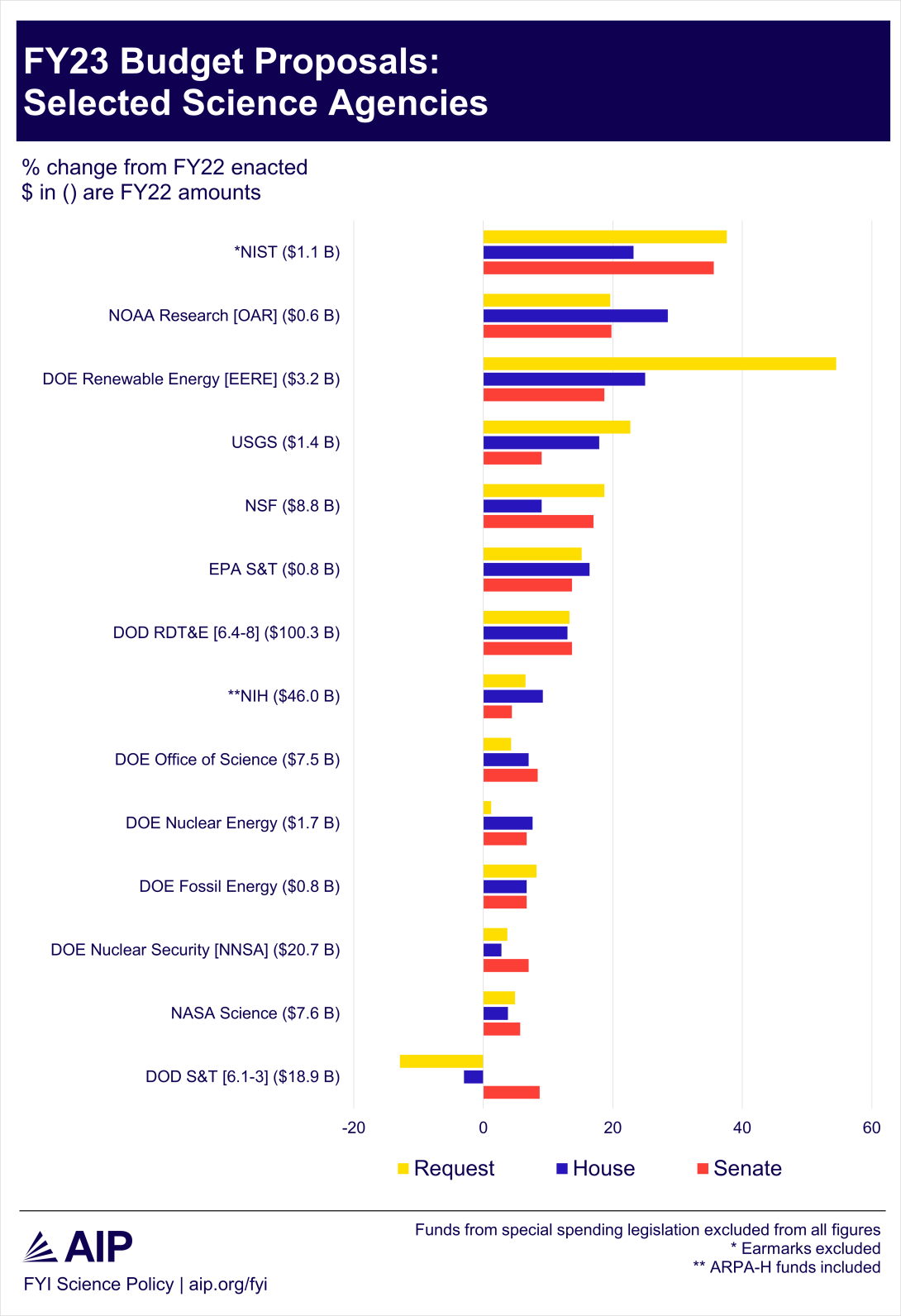 In stark contrast to the programs racing to scale up, programs on stopgap funding are constrained in what they can do by uncertainty surrounding their final appropriation level and a lack of authorization to start major new projects. The stopgap lasts until Dec. 16, but Congress could extend it should negotiators need more time to arrive at a finalized appropriation.

If negotiations follow past patterns, Republicans will compel Democrats to lower their proposed increases for nondefense programs and add more money for defense programs. Any shift in power after the election on Nov. 8 could further shape the final outcome. The twin threats of the Senate filibuster and a government shutdown usually bound how far either party tries to push its position, but Republicans’ hostility to the Biden administration could lead them to be aggressive in seeking spending cuts.

At the moment, a lobbying campaign is underway to convince both parties to revise earlier proposals upward to align with the budget aspirations of the CHIPS and Science Act. While the act’s targets are non-binding “authorizations,” one consequence of the act having the status of law is that it gives federal agencies a freer hand to push alongside other advocates for Congress to meet the targets.

For example, the National Science Board, which oversees NSF, is campaigning for Congress to raise the agency’s budget from about $8.8 billion to the act’s $11.9 billion target. In a recent op-ed directed at lawmakers, board chair Dan Reed and member Darío Gil pointed to NSF’s Graduate Research Fellowship Program, its artificial intelligence research institutes, and its new Regional Innovation Engines program as examples of activities that could be expanded well beyond their current size.

Discussing the CHIPS and Science Act at the press roundtable, Berhe similarly remarked, “It’s huge, obviously. The authorization for the Office of Science is $50 billion over five years, along with a number of expanded roles. And my major priority here, a priority of everybody at the Office of Science, is to make sure that we work as hard as we possibly can to translate those authorizations into appropriations.”

The fiscal year 2023 target for the Office of Science is $8.9 billion, up from the current $7.5 billion budget. The target for NIST is over $1.5 billion, up from about $1.1 billion (with congressional earmarks subtracted). The CHIPS and Science Act also sets an $11 billion five-year budget target for a new program within the Commerce Department to promote regional innovation that has not yet been established.

While most attention in this year’s budget cycle is focused on actual and prospective large-scale increases, agencies are also awaiting clarity on more particular issues.

For instance, last year NIST’s budget became a repository for earmarked projects unrelated to the agency’s mission, creating an apparent increase that actually left funding almost flat for its core activities. Earlier this year, Locascio reported that, in her meetings with lawmakers, they had not appreciated how earmarks distorted the agency’s budget topline. NIST appears poised to absorb further earmarks in fiscal year 2023, but Democrats’ proposed budgets would still leave core programs with a sizeable increase, provided they are not pared back.

The proposals House and Senate Democrats have put forward for basic research programs in the Department of Defense diverge markedly, with the former proposing a 6% cut and the latter a 22% increase. Last year, increases Republican secured in negotiations for defense spending resolved a similar divergence in Democrats’ DOD basic research proposals in favor of a small increase.

Among science agencies, the picture for NASA’s budget is relatively straightforward. However, there is some question about whether Congress will follow the Biden administration in seeking to control the multiyear expansion of the agency’s planetary science program. To do so, the administration has proposed delaying its Near Earth Object Surveyor mission, but asteroid detection has strong support in Congress and increased salience in view of NASA’s recent successful mission to alter the dynamics of a double-asteroid system. Early indications suggest the mission will be fully funded, but it is unclear if this will come at the expense of other parts of the planetary science portfolio.