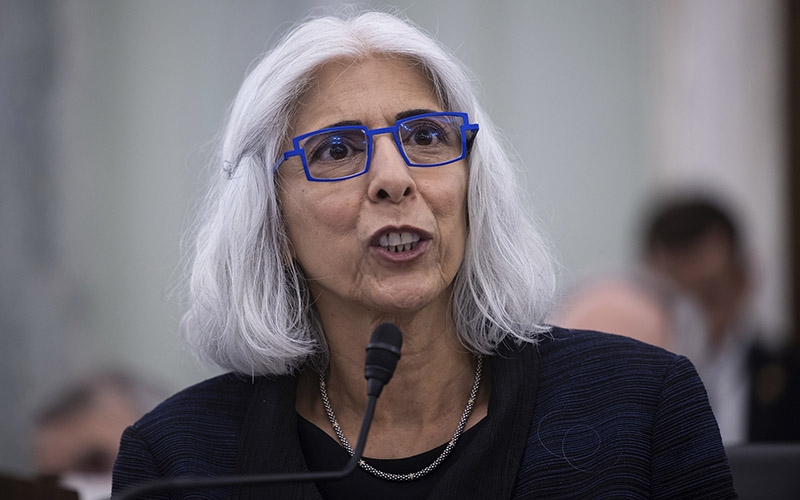 The Commerce, Science, and Transportation Committee voted 15 to 13 yesterday to advance the nomination of Arati Prabhakar to lead the White House Office of Science and Technology Policy.

Despite a mostly favorable reception at her nomination hearing last week, every Republican on the committee voted against her except retiring Sen. Roy Blunt (R-MO). Committee Ranking Member Roger Wicker (R-MS) explained that Republicans wanted more time to probe her views on “right to life issues,” apparently referring to concerns about her responses to questions for the record by Sen. Mike Lee (R-UT) on abortion and fetal tissue research.

The vote came a little over a month after President Biden picked her for the role. Wicker remarked that Committee Chair Maria Cantwell (D-WA) had requested expedited action on the nomination, and the full Senate could hold a final vote before it departs for the August congressional recess.

Pending her confirmation, Biden plans to appoint Prabhakar as his science adviser and as a member of his Cabinet, a status he raised the OSTP director to at the outset of his administration. At last week’s hearing, senators explored how she would approach the elevated role and address fallout from the resignation of Biden’s first science adviser, geneticist Eric Lander, who stepped down in February after reporting by Politico revealed he had been verbally abusive to office staff members.

Addressing the Lander scandal in her opening statement at the hearing, Prabhakar said the press reports about OSTP were "extremely concerning,” but added that she believes interim OSTP director Alondra Nelson and her staff are now “setting a foundation for a respectful environment.”

“If I'm fortunate enough to be confirmed, people will be my first priority,” she remarked.

Wicker said he believed she would be confirmed, but he also sought assurances that she would work to improve OSTP’s workplace climate. He has previously registered concern that issues have persisted since Lander’s departure, stating in May that the committee was continuing to hear reports of a “toxic work environment” there.

He also asked Prabhakar how she would avoid real or perceived conflicts of interest, citing a further report by Politico on the influence of former Google CEO Eric Schmidt within the Biden administration.

Schmidt’s philanthropic initiative, Schmidt Futures, indirectly funded the salaries of two OSTP staff members during Lander’s tenure, shortly after Schmidt donated $150 million to the Broad Institute, a major genomics research center Lander founded and led until his move to the White House. Schmidt also has a hand in several innovation initiatives backed by the Biden administration, including the Quad Fellowship and America’s Frontier Fund.

Wicker suggested the topic is particularly salient given that Prabhakar has “business ties” with Schmidt, apparently referring to Schmidt Futures’ support for Actuate, the nonprofit research organization she founded and leads.

“We should applaud philanthropy in the service of scientific progress, but there's something unseemly about a well-connected billionaire's foundation reportedly paying the salaries of OSTP staff and consultants indirectly,” he said.

According to allegations by OSTP lawyer Rachel Wallace, who has become a whistleblower, Lander repeatedly clashed with her over whether federal ethics rules permitted such staffing arrangements. Both OSTP and Schmidt have defended the arrangements as being well within the bounds of ordinary practice, and a spokesperson for the Broad Institute told Politico the $150 million donation had been in the works since 2020, before Biden selected Lander as science adviser.

Prabhakar stressed the importance of avoiding even the appearance of conflicts of interest, but she noted the legislation that created OSTP permits it to draw on resources from outside government. She explained the office was “designed to have a modest budget and to tap resources from across federal agencies as well as from outside and the private sector, and that's been done very successfully.”

“It's so integral to OSTP's mission to work with all those communities that I think it does make sense to draw from different parts,” she added.

If confirmed, Prabhakar will play a central role in overseeing implementation of the landmark innovation legislation that Congress approved this week. Now called the “CHIPS and Science Act,” its centerpiece is a $52 billion appropriation for semiconductor manufacturing incentives and R&D.

Notably, semiconductors were an early focus of Prabhakar’s career as an engineer at the Defense Advanced Research Projects Agency in the 1980s, during an earlier wave of concern about the U.S. losing ground to Asia in the sector. Prabhakar also went on to lead the National Institute of Standards and Technology, which will receive billions of dollars for semiconductor R&D through the legislation, and she later returned to DARPA as director after an interlude in Silicon Valley.

Cantwell noted at the hearing that another aim of the legislation is to expand federal funding for “translational science,” the process of turning research results into practical applications. She said Prabhakar’s experiences make her well suited to that task, noting for instance that she led a major expansion of NIST’s manufacturing and industrial technology programs.

Cantwell also pointed out that the legislation requires OSTP to assemble a quadrennial “national science and technology strategy,” and she asked how Prabhakar would use her Cabinet seat to tackle government-wide challenges such as cybersecurity.

One idea aired at the hearing was for OSTP to take on a central role in identifying priority technology areas relevant to competing with China.

“I think OSTP, when properly led, may be the only place that can look across all jurisdictions,” he said.

One of the issues Prabhakar will face if confirmed will be the continued implementation of a presidential policy called NSPM-33 that establishes minimum research security standards across the government.

The policy requires agencies to harmonize their requirements for what scientists must disclose on grant applications and to develop cybersecurity standards for universities that accept federal research funds, among other provisions. OSTP is currently working to address concerns among some academic community leaders that the resulting new policies could impose undue administrative burdens, chill research collaboration, and subject researchers to unfair scrutiny based on their ethnicity or national origin.

Wicker inquired about the status of NSPM-33 in his written questions, and in the hearing he asked more generally about the adequacy of federal research security policies given remarks by FBI Director Christopher Wray about the scale of the Chinese government’s efforts to exploit the U.S. research system.

Prabhakar replied that in working to counter such behavior the U.S. should keep in mind “how important it is for the most fundamental research to be conducted in a way that's open and widely available to the research community.”

“I think we have to be very clear about the fact that what we are concerned about is espionage and the undue taking advantage of the U.S. research base by other countries. But we don't want to inappropriately go after individuals who are earnestly working on their research and not out of line,” she concluded.