On 57 Diamonds from the Wenner Acquisition

On 57 Diamonds from the Wenner Acquisition

In this blog post I would like to present the 57 sammelbands (bound-with volumes) of the Wenner Collection. As you may have heard before, this collection includes rare books, periodicals, offprints, conference proceedings, and patents, which are related to important moments in the history of physical sciences. Many of the papers included in the sammelbands are written by Nobel Prize laureates. The majority of these sammelbands were created (bound together) by the collector David Wenner. 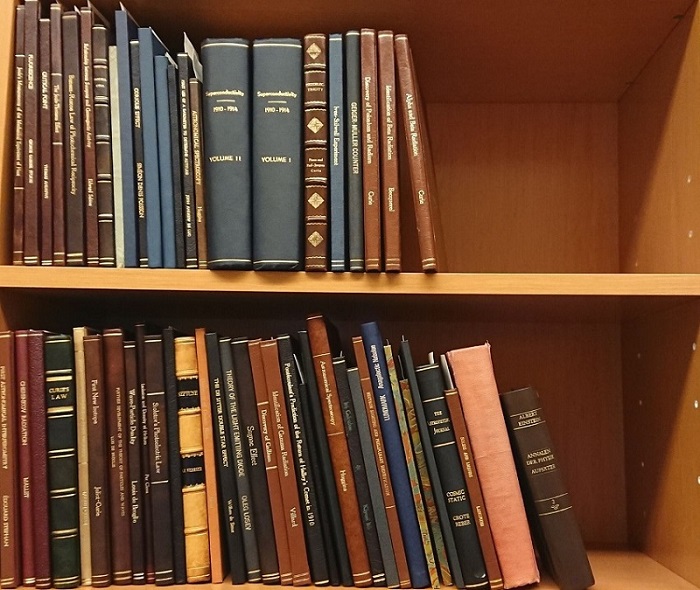 The 57 sammelbands in the Wenner Collection. Photo credit: Gergana Kostova

The term sammelband is borrowed from German, and means a volume comprised of a number of separately printed or manuscript works that are bound together (after their publication) to serve the reader for learning, pleasure or another reason. A sammelband can include a few monographs or several articles from the same journal, or articles from different journals, or even a hundred items from the same genre bound together. The possibilities are many!

The process of cataloging sammelbands had some challenges, related to the different and often high number of papers included in them. Some of them have just 6 papers and notes bound in the same volume, while others have 27 or 30 papers. Therefore, I had to explore many options of how to describe them and include information that will allow you, the researchers, historians of science and students, to discover the papers included in these volumes.

Since these sammelbands are part of one collection, the Wenner Collection, I was looking to find a unifying approach to catalog all of them in a similar way, with all their specifics. For consistency's sake, I chose to use the Contents field (505 MARC field) to only lists papers or articles that were highlighted by the collector.

Some of the sammelbands didn’t have a title, they simply had the notable paper titles on the front cover. Now, these sammelbands have devised titles that begin with “Collection of…” followed by the topic of the articles and the names of the author(s), for example Collection of papers on isolation of helium by William Ramsay and Norman Lockyer. You see in the catalog record that this sammelband includes nine articles published in the Proceedings of the Royal Society of London and read the titles of these articles. There are also sammelbands with titles given by the collector. They perfectly reveal the topic of the included major papers.

This sammelband can be located by the author's name and the descriptive title above. If you are looking for a paper that was published  by Chandrasekhar before 1935, it might be included in this volume. If the article is included in the sammelband, it will appear in the result list in the NBLA library catalog. This volume is inscribed and dated “1935, September 21”, most likely by the author, and dedicated “For the Royal Society”. It was made after Chandrasekhar was elected to a Prize Fellowship at Trinity College for the period 1933–1937.

The sammelband is organized in three sections with handwritten titles: Stellar structure, Stellar atmospheres and Distorted Polytropes. There are two papers in the volume that are co-authored, one with Christian Knakkergård Møller, and one with Leon Rosenfeld. The papers included in the sammelband were published in these journals: Monthly Notices of the Royal Astronomical Society, Zeitschrift für Astrophysik, Saertryk af Nordisk astronomisk tidsskrift, Nature, and Astronomical Journal of Soviet Union.

It is interesting to note that Chandrasekhar (born in 1910) was only 25 years old when he had so many publications, which he dedicated to the Royal Society in this sammelband. Six of the papers in the sammelband are on defining the Chandrasekhar limit, which was discussed at the meeting of the Royal Astronomical Society in London in 1935 and wasn’t accepted widely in the beginning. A year after the presentation in London, Chandrasekhar moved to Yerkes Observatory (Wisconsin), operating then under the University of Chicago, and remained in the US for the rest of his life.

Another uniquely organized sammelband is the Collection of Albert Einstein papers published in Annalen der Physik, 1901-1922. You may find it under this devised title or by searching one of the titles of included papers. This sammelband has 39 papers and notes published in German during these two decades in Annalen der Physik. Four of the papers are co-authored with J. Laub, L. Hopf, O. Stern and A. D. Fokker. The volume also includes some brief notes to other researchers’ publications. It is interesting to see how the research subjects evolved in time, and how these papers and notes next to each other served as a scientific diary. 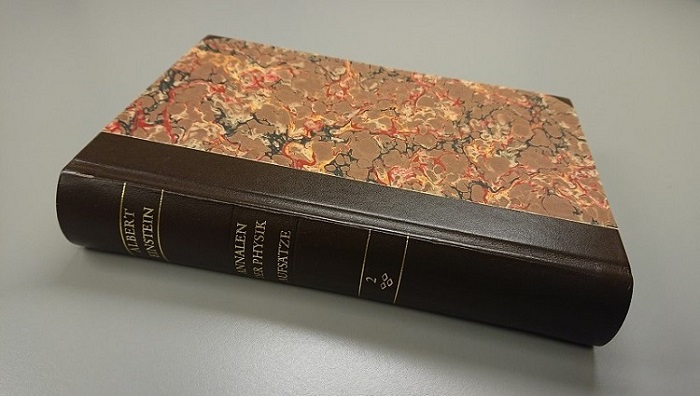 The articles included in this sammelband were written during the period of most rapid growth of Einstein's academic career. Included is one of the most influential papers of Einstein: “Ist die Trägheit eines Körpers von seinem Energieinhalt abhängig?” (“Does the inertia of a body depend upon its energy-content?”) published on November 21,1905. In 1905 Einstein published four papers known as the Annus Mirabilis papers: on the photoelectric effect, on Brownian motion, his first paper on the theory of special relativity,  and the paper, included in this sammelband, on the principle of mass-energy equivalence demonstrated in the equation E = mc².

The papers included in this sammelband were written simultaneously with many changes in Einstein’s career and his appointments in major European universities - University of Bern (1908-1910), Charles-Ferdinand University, Prague (1911),  ETH Zürich (1912-1914), Humboldt University, Berlin (1914-1918). The last article included in the sammelband is from 1922, the year when he received his Nobel Prize.

The Curie family is also prominently featured in the Wenner Collection and in the sammelbands in particular. One of the sammelbands is the Collection of Papers on Discovery of Polonium and Radium. It contains papers on polonium and radium by Pierre Curie, Marie Curie, one paper co-authored with Gustave Bémont, and one by Eugène Demarçay, all published in Comptes Rendus de l'Académie des Sciences in 1898. In the first article, Marie Curie proposes that pitchblende contains an element that is more radioactive than uranium or thorium.The second article is about the discovery of a new, highly radioactive element, later named “polonium” by Marie Curie. The third article is on the discovery of radium. In the fourth article, E. Demarçay confirms the existence of radium.

Collection of papers on Discovery of Polonium and Radium by Marie and Pierre Curie. Photo credit: Gergana Kostova

Another sammelband with Curie papers contains three serial issues with six papers by Marie and Pierre Curie: Collection of Papers on Characteristics of Alpha and Beta Radiation from 1900. They are closely related to the discovery of radioactivity by Henri Becquerel in the same year, and to the publication of his papers on beta radiation which you can find in the Collection of papers on identification of Beta Radiation.  Marie and Pierre Curie and Henri Becquerel shared the Nobel Prize in Physics in 1903 for their theory of radioactivity. This theory was the basis of innumerable applications of nuclear technologies in many areas: medicine (X-ray imaging, radio assays, radiation treatment of cancer, proton therapy, etc.), consumer products (smoke detectors, tritium-powered emergency signs), agriculture (rapid generation of hybrids, pest insect control and prevention), space exploration (thermonuclear reactors powering stellar probes and Mars exploration vehicles) and the army (nuclear powered vessels and nuclear weapons). 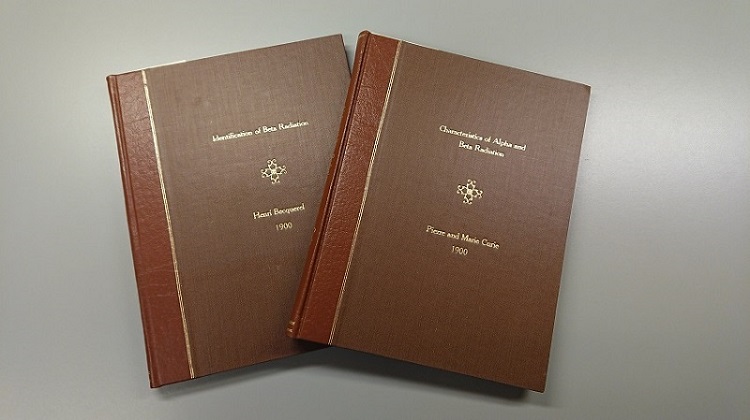 In addition, there are many other sammelbands on a wide variety of topics. For example, the collection includes sammelbands on the discovery of superconductivity by Heike Kamerlingh Onnes, on piezoelectricity by Jacques and Pierre Curie, on the invention of the Geiger-Müller counter, and on atomic clocks by Herbert E. Ives and G.R. Stilwell. You can check them out, as well as the other sammelbands in the Wenner Collection, in our online catalog. 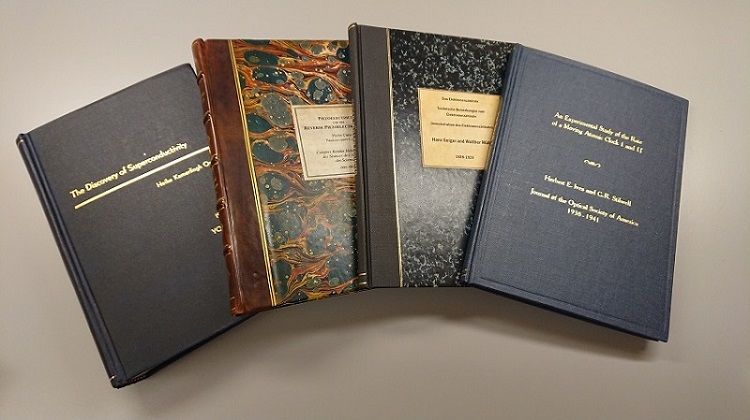 Four sammelbands from left to right: by Heike Kamerlingh Onnes, by Pierre and Paul-Jacques  Curie, by Hans Geiger and Walther Müller, and by Herbert E. Ives and G.R. Stilwell. Photo credit: Gergana Kostova

It was a pleasure to hold in my hands and catalog such science treasures. I am sure you can enjoy exploring these unique volumes that bring light to the important discoveries we use in many different areas of life.

6 Marie Curie and the Science of Radioactivity at https://history.aip.org/exhibits/curie/resbr2.htm

7 The Nobel Prize in Physics 1903 at https://www.nobelprize.org/prizes/physics/1903/summary/