I’m a big fan of idioms and a big fan of dogs. So this month’s photos of the month is based on one of my favorite idioms: the dog days of summer. If you live anywhere in the northern hemisphere, you may be experiencing these dog days right now, thanks to the climate crisis, waiting for the sweet relief of fall’s cooler weather.

I’ve always associated the saying “dog days of summer” with panting canines (beagles specifically, in my family’s case) laying in the hot sun during the warmest, most humid months of the year. As it turns out, the saying’s origin is rooted in mythology and early astronomy.

As this National Geographic article explains so succinctly, the phrase refers to one dog specifically - the constellation Canis Major - which contains the star Sirius, the brightest star we can see from the Earth. Ancient Egyptians, Greeks, and Romans believed that the appearance of Sirius in the dawn sky, along with the Sun, in July every year caused the warmer weather. Geminus of Rhodes, a Greek astronomer, had an even more specific hypothesis, stating, “It is generally believed that Sirius produces the heat of the dog days; but this is an error, for the star merely marks a season of the year when the sun’s heat is the greatest.”

Today, we know that Geminus was on the right track. The months of July and August in the northern hemisphere are typically the hottest, not because of the star Sirius, but because of the Earth’s tilt. When the Northern Hemisphere faces the sun, we have more direct light, days are longer, and as a result, hotter.

Phew! Now that we’ve got that figured out, let’s celebrate collectively understanding this great dog idiom by looking at some pictures of dogs from the Emilio Segrè Visual Archives. 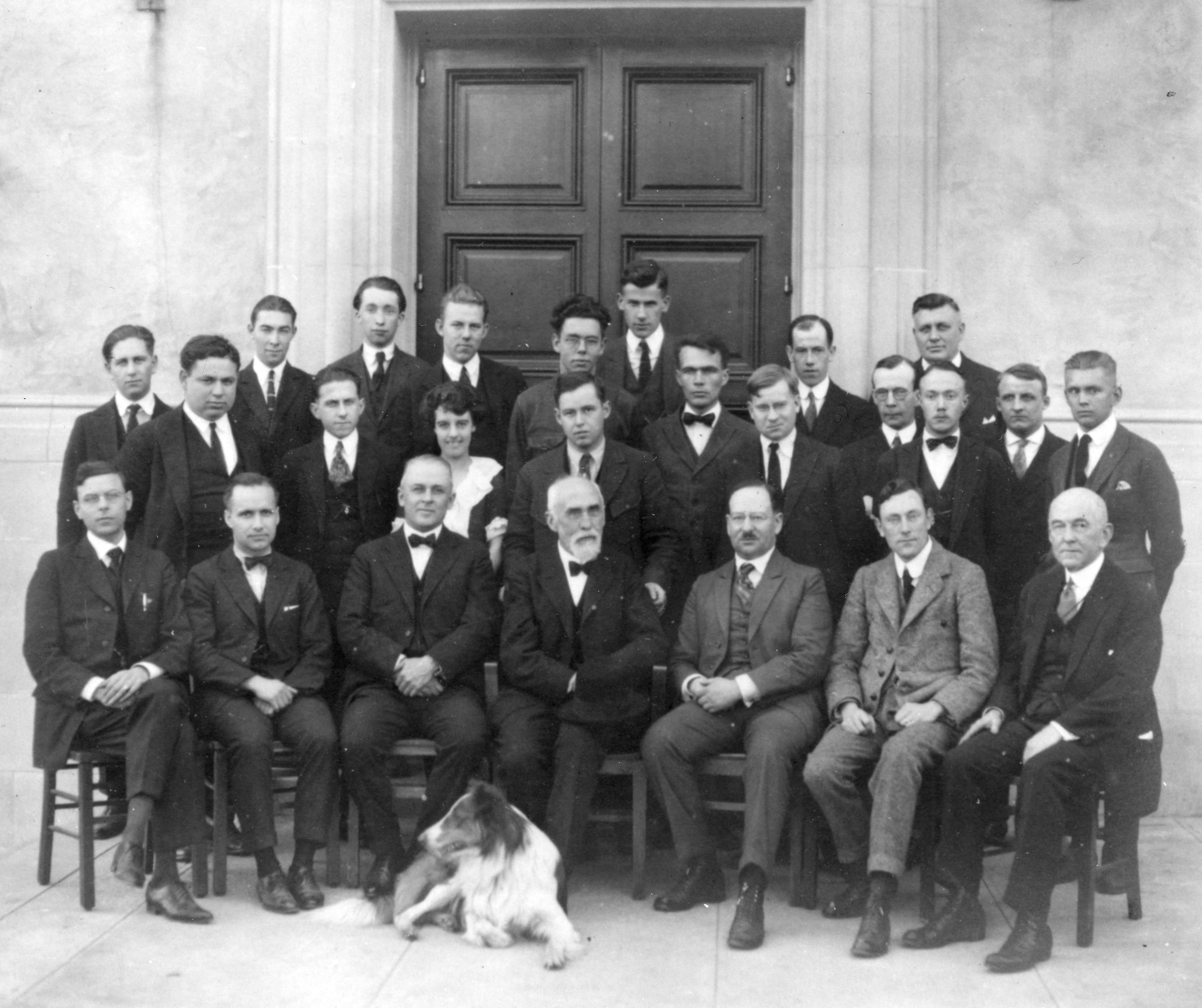 Here we see the dashing 1922 physics faculty of Caltech. A small, albeit distracted, collie sits at the feet of Robert Millikan and Hendrik Lorentz. I have a hunch that this dog was a regular at Caltech’s Norman Bridge Laboratory of Physics - they’re included in a number of shots, including one titled “The Lorentz Lectures,” and staff portraits from the years of 1922, 1923, and 1924. The Lab’s first secretary, Eleanor Bedell Burt, who you can see in this picture, discussed this mysterious dog in her 1978 oral history: “The beautiful collie dog in the front belonged to Bob Burt, my future husband. [The dog’s] name was Buddy.” 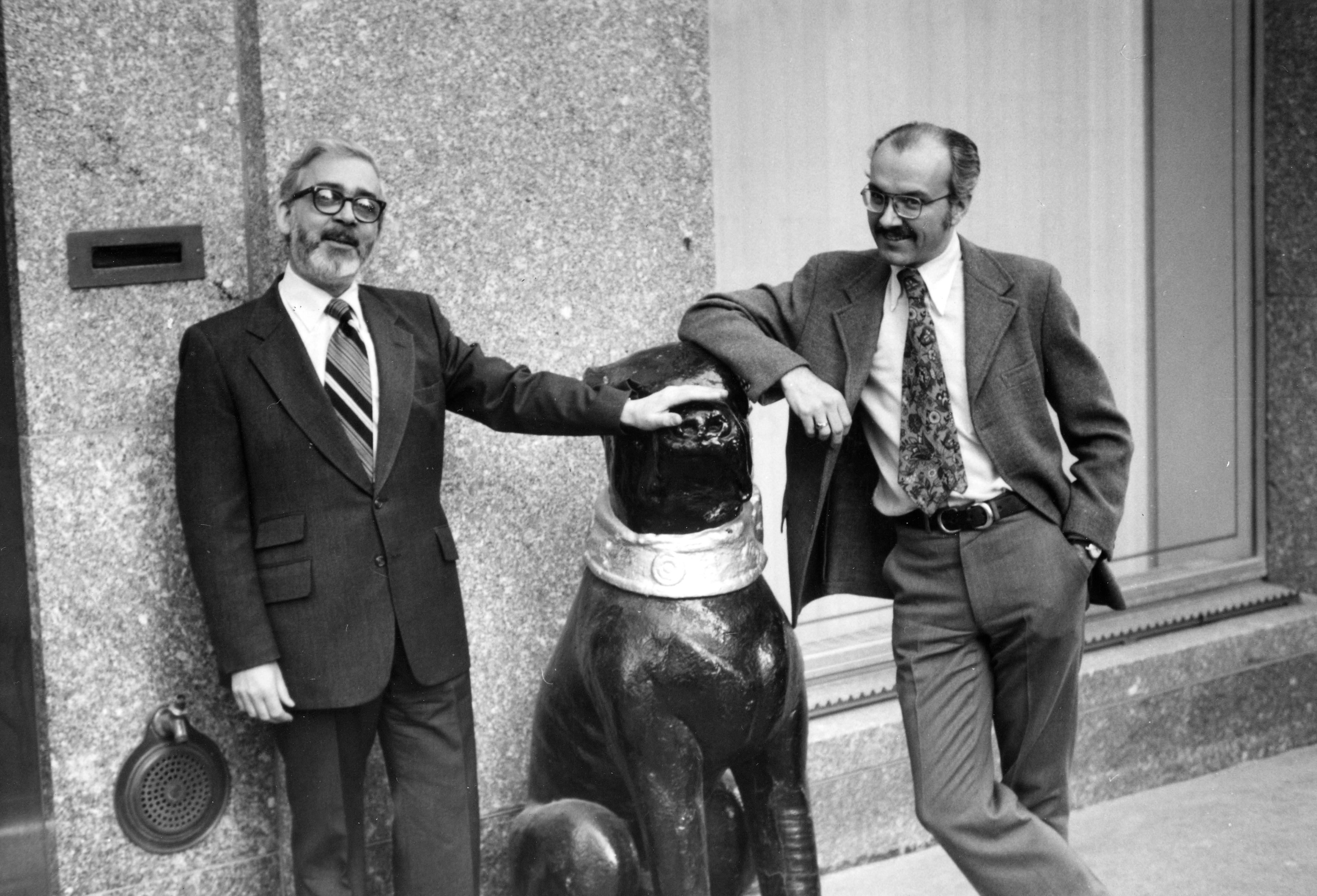 Thomas von Foerster, associate editor of Physics Today, and J.T. Scott, managing editor of Physics Today, stand outside of the American Institute of Physics New York City headquarters with a dog statue in 1980. If you’ve never visited AIP in person before, you may not recognize this dog, which is actually one of a pair, but they’re low-key famous at AIP. My colleague Jae wrote about the duo in a previous blog post. 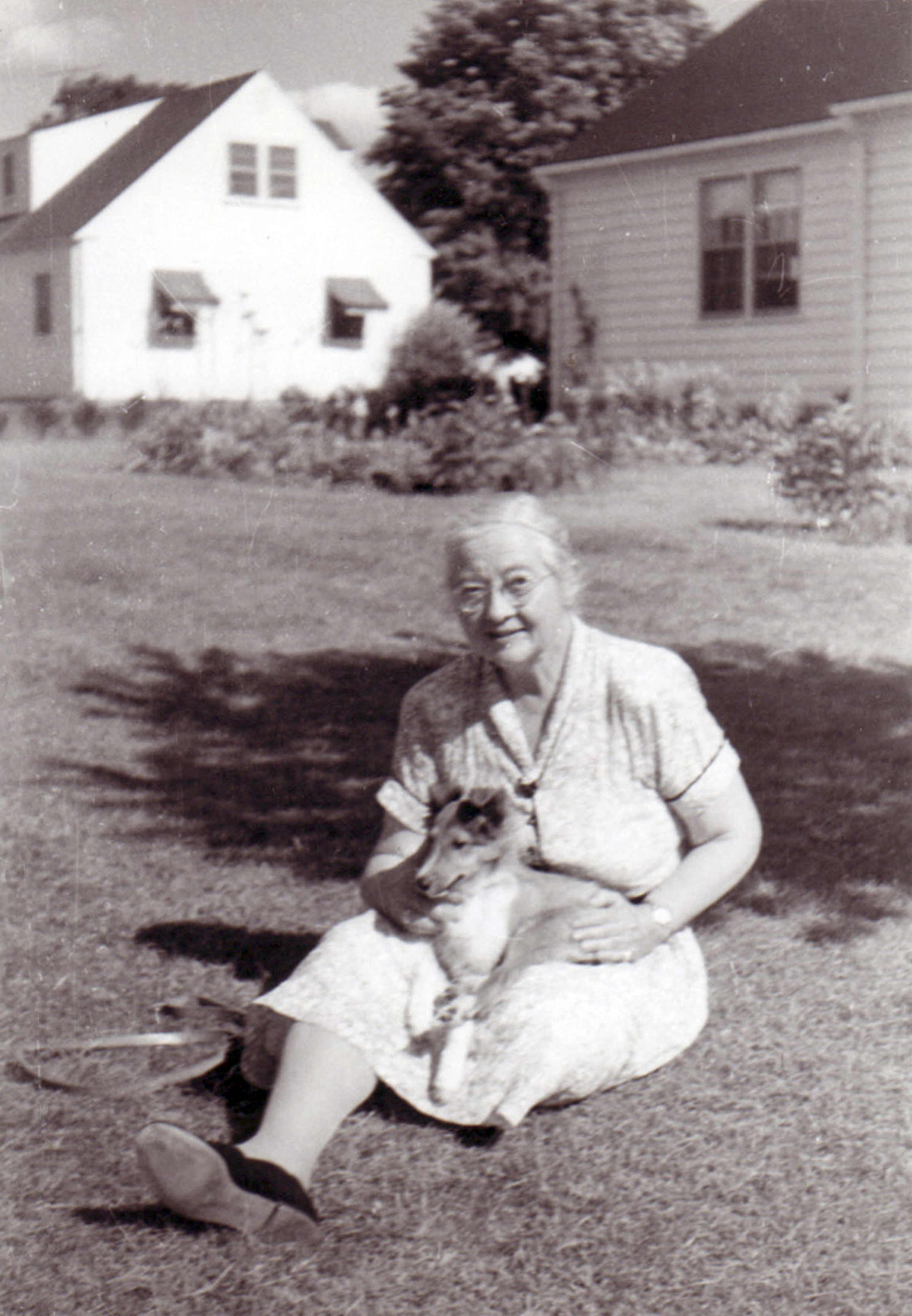 This snapshot shows physics professor Mildred Allen sitting with her sheepdog named Tess in the backyard of their home in South Hadley, Massachusetts, 1956. When this picture was taken she had been working at Mount Holyoke for a total of 28 years, and she would continue teaching as a professor there until her retirement in 1959. 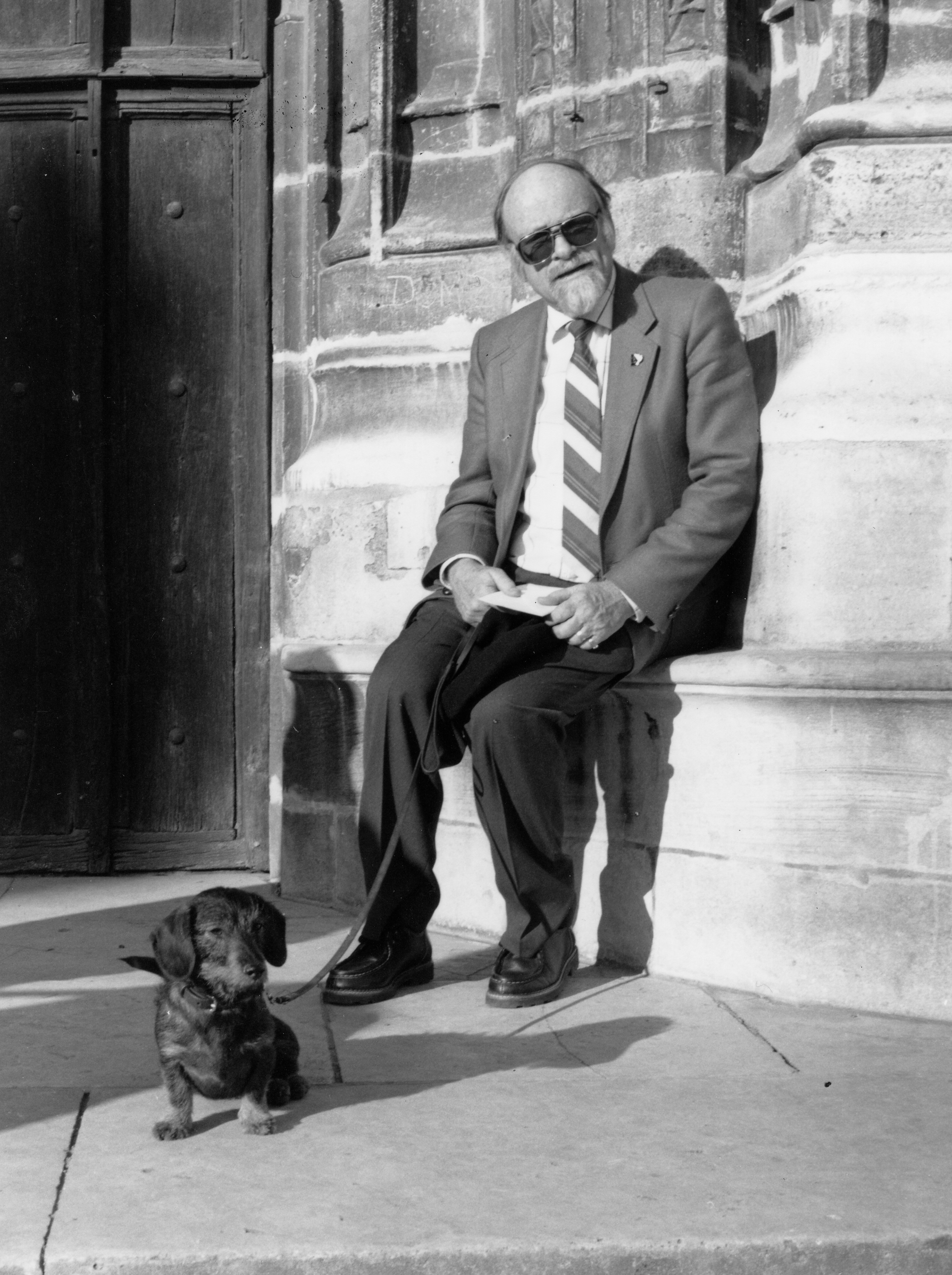 How effortlessly cool is this 1989 photograph of Georges Temmer and his dachshund in France? Born in Vienna, Austria, Temmer moved to France and then eventually to the United States where he worked in nuclear physics. Later in his career, he opposed the nuclear arms race, was active in the Coalition for Peace Action, and traveled the world to lecture on the subject. In early 2020, Ex Libris Universum editor Corinne replicated this picture as part of our #NBLAatHome festivities!

Physicist Georges Temmer and his hound on the left, a librarian and her bestie on the right. #ESVAatHome #NBLAatHome https://t.co/ewUXnZObFB pic.twitter.com/VCHGrNnk4N 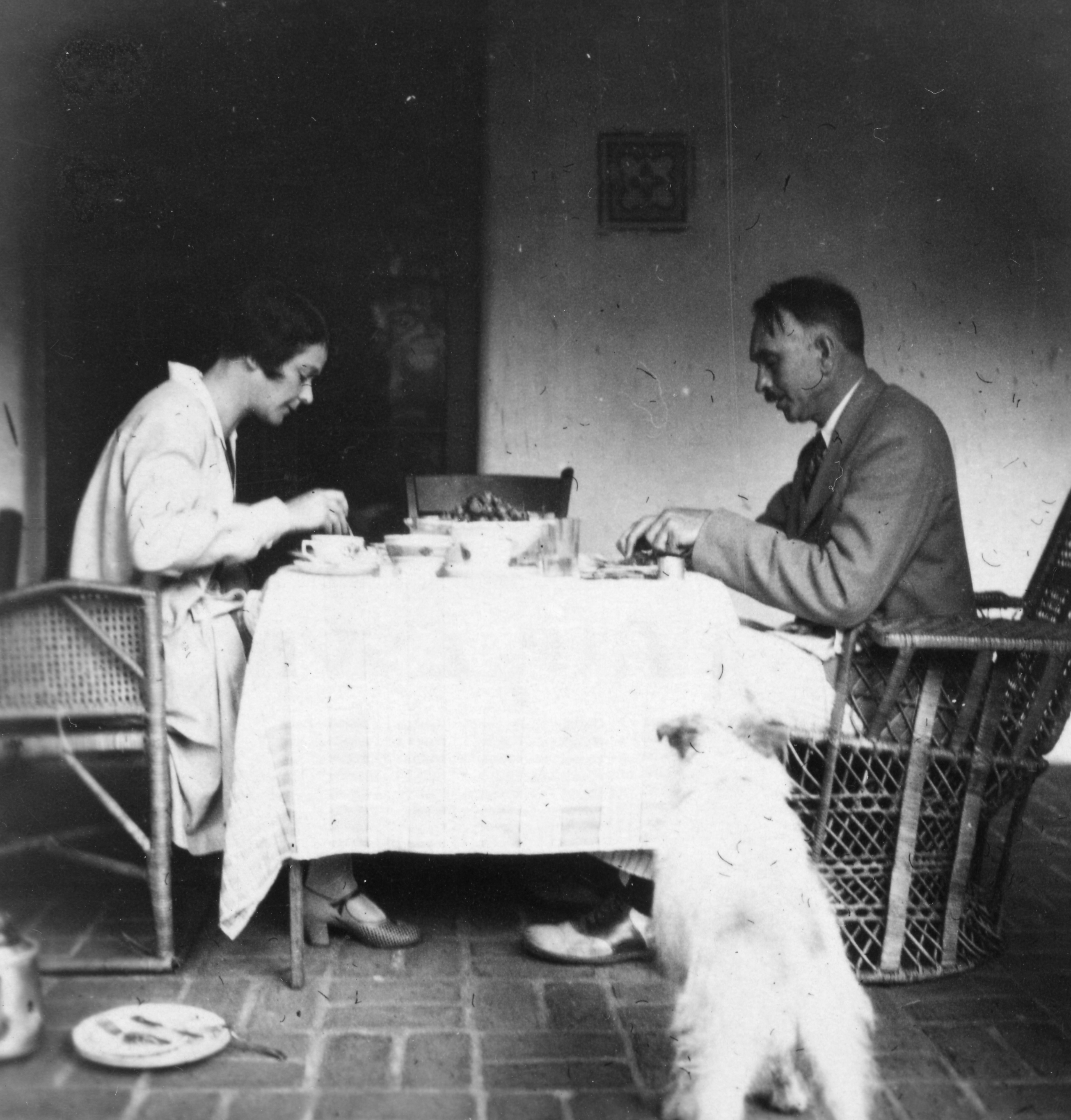 If you’ve ever had a dog, chances are that you can relate to the situation Ruth and Richard Tolman find themselves in here. It’s a classic scene: an attempt at a nice meal only to be thwarted by a hungry pup begging for scraps. I love the story that the above picture tells when paired with this photograph, taken either moments before or after. A cute dog is irresistible. 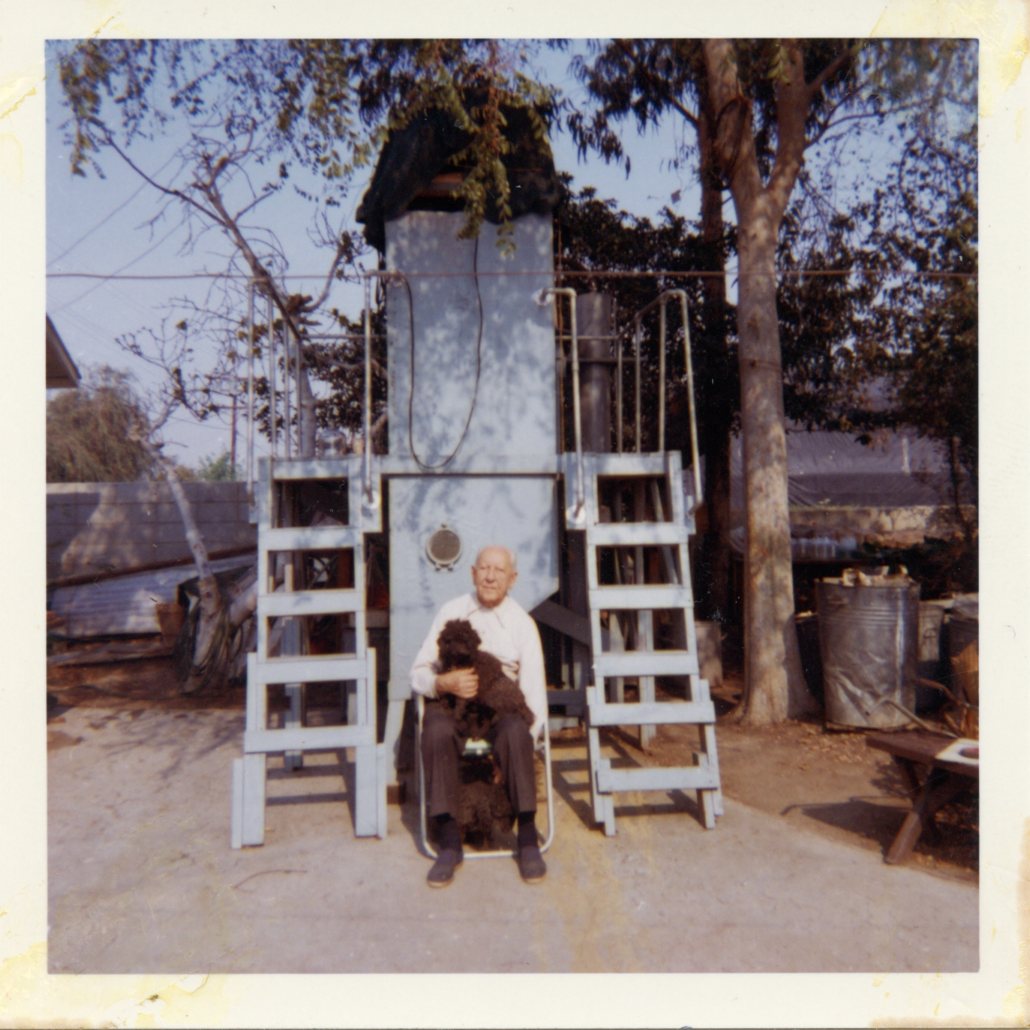 Edson Wolcott sits with his two poodles in front of his ion-concentrator. It seems that his two dogs were not the only ‘pets’ in his life (and in this picture!), as the biography in the finding aid for his papers notes: “A colorful character, full of plans for future enterprises, he hoped, even at the time of this death, to reap a great profit for his pet project, a patented process for recovering gold and platinum by ion concentration from low-grade ores.”

I hope you’ve been both entertained and educated by this article, and if you’d like EVEN MORE information on either the dog days of summer or dogs of scientists, please check out the resources below.

PS: Did you know that physicist Don Page grew up in Alaska, dog sledding and skijoring with dogs in the winters!? Read more in his 1988 oral history interview. Like Page, I grew up spending a lot of quality time with dogs as a child, as seen here in some shots of yours truly over the years.