Optimism and Other Poems

Optimism and Other Poems

A Deep Dive into an NBLA Acquisition
Joanna Behrman, Assistant Public Historian at the Center for History of Physics
Rare Books
Physics History
History of the Book 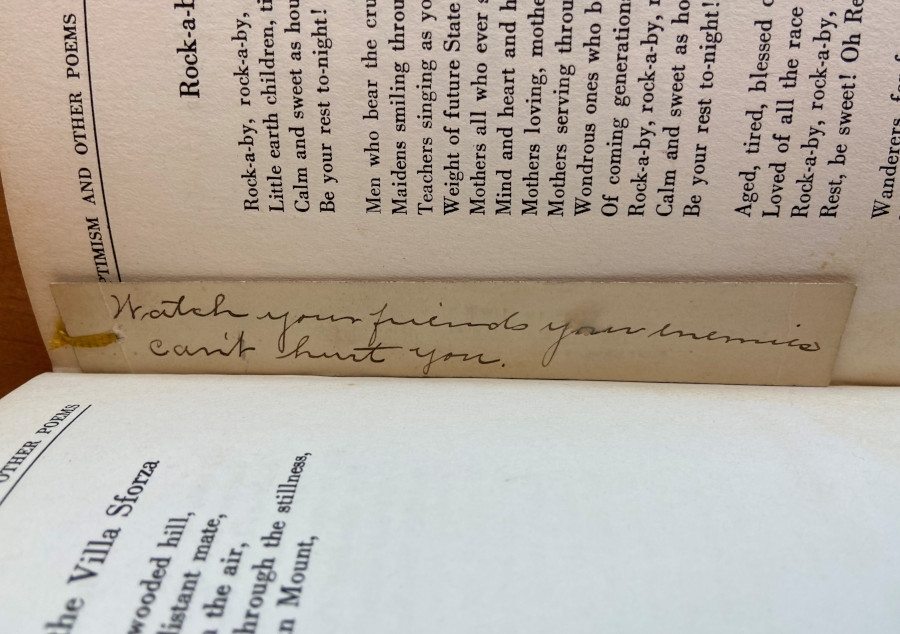 This bookmark was tucked in the pages and likely belonged to an early owner. It reads: “Watch your friends your enemies can’t hurt you.”

The Niels Bohr Library & Archives has recently acquired a rather unusual book of poetry and photographs written by missionary and physicist Laura Dickinson. Despite its unassuming cover, this book, entitled Optimism and Other Poems, has some unique touches, including an inscription by the author to a “Cousin Carrie,” as well as, still tucked within its pages, a bookmark belonging to an early owner. Cousin Carrie was likely Dickinson’s second cousin, Carrie Gaylord, who worked at Spelman College as a Matron and then Hostess. Inside the book are 40 short poems, as well as 6 photographs also taken by Dickinson. 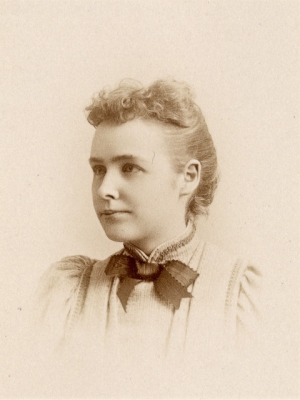 Laura Dickinson in her early life. Photo possibly taken around the time she was a student at Mount Holyoke College.

This book is also notable for the history of its author, who lived a relatively obscure life, but one devoted to what might seem today to be an unusual combination of professions – that of science education and missionary work.

Laura Austin Dickinson was born in North Amherst, Massachusetts on November 15, 1870. She had two siblings, a brother Raymond and a sister Louisa. A common question I’ve had since starting to research Dickinson – and especially since finding out that she wrote poetry – is if she is related to the well-known Emily Dickinson. And the answer is yes! Although not very closely. Laura and Emily were third cousins through their great great grandfather. 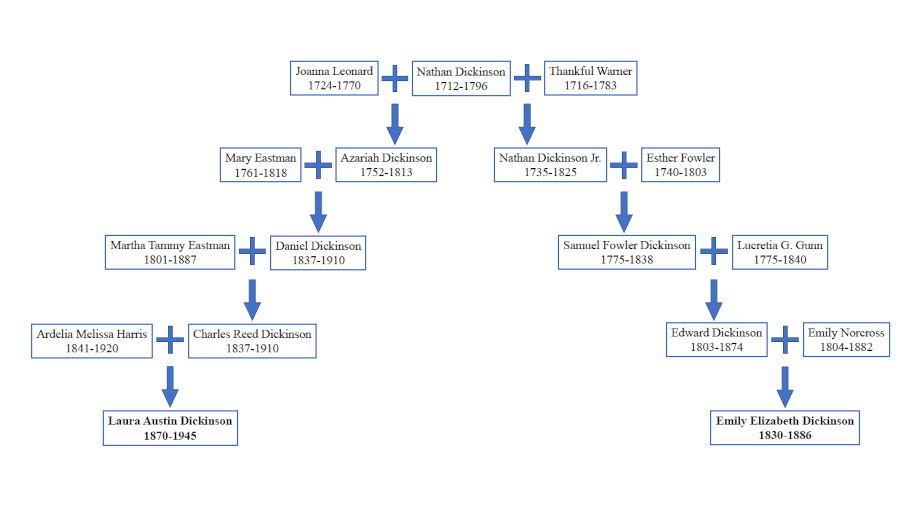 The familial relationship between Laura and Emily Dickinson is likely that of third cousins, which means they shared a great-great grandfather. Information gathered from FamilySearch.org.

In 1889 Laura Dickinson and her sister enrolled at Mount Holyoke College on the Seminary track. At this time, at Mt. Holyoke and many other colleges, college courses were set series of classes with very little variation among students. Mt. Holyoke offered three tracks – the Classical, the Scientific, and the Seminary. The Classical emphasized ancient languages, history, and literature, while the Scientific emphasized a larger amount of science, mathematics, and the “Modern Languages” (German or French). The Seminary track fell somewhere in the middle. However, students on all tracks were required to take a breadth of certain courses considered essential to a basic education – among which was physics. 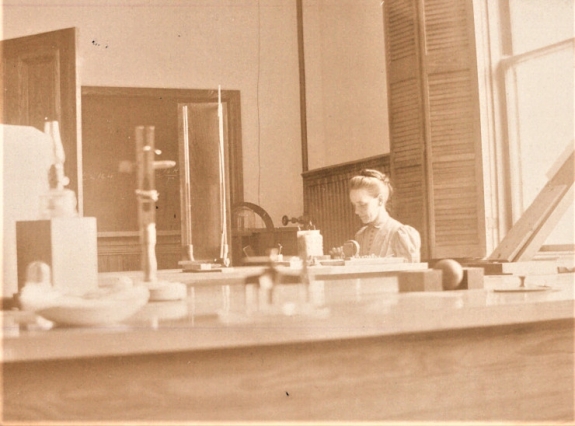 Marcia Keith in her laboratory in Williston Hall. Keith taught physics at Mount Holyoke between 1885 and 1903.

All students took a basic introductory physics course in their junior year which used Atkinson’s translation of Ganot as the textbook, accompanied by some work in the laboratory. (This was likely Edmund Atkinson’s Elementary Treatise on Physics Experimental and Applied, which was a translation of Adolphe Ganot’s Traité élémentaire de physique expérimentale et appliquée. This book was an enormously popular introductory physics textbook in the nineteenth century.) Dickinson would have taken her physics class with Professor Marcia A. Keith. Keith, who worked at Mount Holyoke College between 1885 and 1903, is famous as one of the two women present at the founding of the American Physical Society - the other being Isabelle Stone, who was then a professor of physics at Vassar College.

After graduation Dickinson devoted herself to teaching and missionary work. Dickinson was one of many female physicists who taught at missionary schools in the United States or abroad in the nineteenth and twentieth centuries. Mount Holyoke College especially produced many female scientist-missionaries, including other physicists like Sara Boddie Downer and Edith Marion Coon. Science was a vehicle for missionary work, and vice versa. 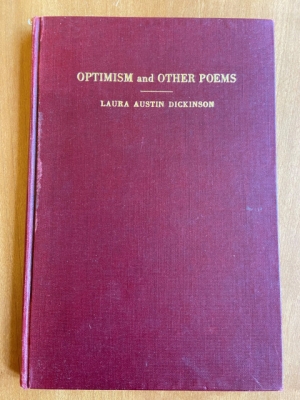 Last year NBLA acquired this copy of Optimism and Other Poems by Laura Dickinson, published in 1929.

In the fall of 1913 Dickinson went to teach at Spelman Seminary. Spelman had been founded in 1881 by white northern female missionaries with backing from John D. Rockefeller and the American Baptist Home Mission. Spelman offered academic, industrial, and religious education to uplift Black women while holding them to strict ideals of respectable Black Christian womanhood. When she applied, Dickinson was asked to discuss in her application (among other things):

These were not unusual questions to ask at the time, but it is useful to note as it helps to remind us just how much the professors were expected to model ideal personality traits, hygiene, and Christian ethics for their students. (The history of the social significance of hygiene ties into the history of eugenics, which is a fascinating discussion but one which will have to wait for another time!) 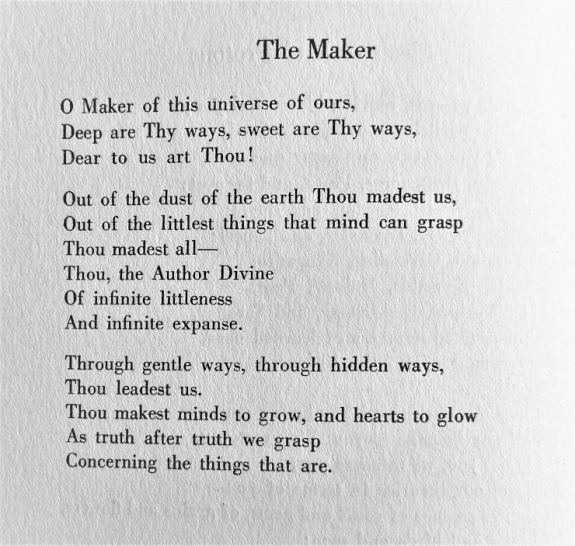 Dickinson’s poem “The Maker” illustrates how Dickinson saw the divine in the workings of the universe.

At first Dickinson worked as a librarian and taught science classes for the Seminary’s high school track, but the institution was on an upward growth trajectory, and so was she. In 1924 Spelman Seminary became Spelman College. That year Dickinson took a sabbatical to the University of Michigan, where she earned a Master’s in Physics, and returned to take her new position as the college’s first Professor of Physics and Chemistry. Spelman College continues to flourish as one of a few Historically Black women’s colleges – and it is currently the only one to offer a major in physics.

Laura Dickinson taught at Spelman College until 1933 when she retired to care for her ailing sister. During the summers, she took classes from Columbia University, the University of Michigan, the University of Chicago, and the American Academy in Rome. And it was at the Academy that she took the photographs featured in her 1929 book, Optimism and Other Poems. She later published another book of poetry and photographs, entitled Pen Pictures, in 1937. 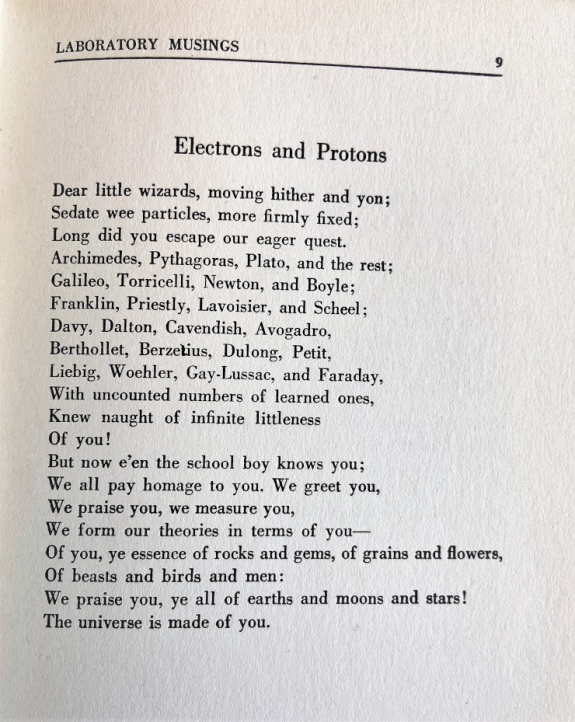 Dickinson’s poem “Electrons and Protons” is included in a subsection of Dickinson’s book entitled “Laboratory Musings.”

Dickinson’s poems in Optimism speak to her own faith and its motivating role in her life. In a section entitled “Laboratory Musings” Dickinson includes a poem entitled “Electrons and Protons” as well as one entitled “The Maker.” Including “The Maker” among her Laboratory Musings clearly indicates the connection Dickinson made between work in the laboratory and understanding the role of the Divine in the world. And the language she uses to discuss the subatomic particles in “Electrons and Protons” is nothing short of reverential.

The idea that religion and science are fundamentally opposed to each other is routinely debunked in the history of physics. From Kepler to Maxwell, there have been numerous examples of religious physicists who viewed their efforts to understand the natural world as intimately connected to their faith. Laura Dickinson’s poetry offers an opportunity to explore the relatively understudied world of women who melded science and religion in pursuit of occupational opportunities as educators and missionaries.

I must also give thanks to Holly Smith and Kassandra Ware of the Spelman College Archives and to Deborah Richards of the Mount Holyoke College Archives and Special Collections. I did research about Dickinson at each of these institutions and their help was invaluable. You can read some more of this research as well as more about Dickinson’s life in this History Newsletter article.

You should see if a publisher is interested in publishing it, with you as editor. Also, please correct the spelling of your name in the link.