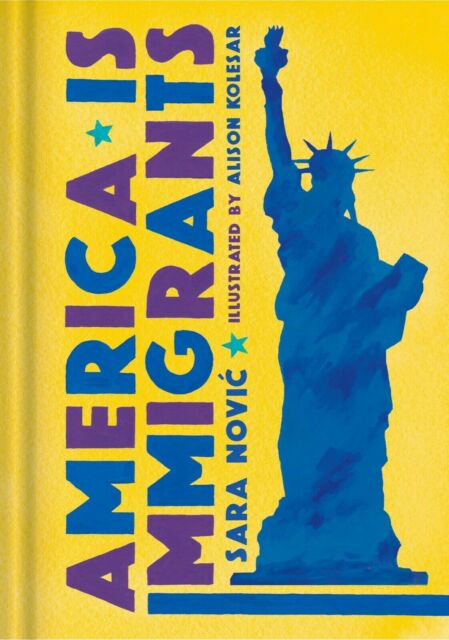 As you may have guessed, the staff here are pretty big fans of reading. Audiobooks, romance novels, graphic novels, memoirs – you name it, one of us (most likely!) has read it. Two of us recently read America Is Immigrants by Sara Nović and illustrated by Alison Kolesar. Inspired by this book and in response to the recent war in Ukraine that has led to a mass exodus of Ukrainian citizens to other countries, we bring you this month’s Photos of the Month: a sampling of physicists and physics-adjacent people who immigrated to America. Interspersed throughout photographs from our Emilio Segrè Visual Archives are some excerpts and illustrations from the book.

We would also like to note that while this post celebrates those who immigrated to America, emigration to the United States was and still is not an option for some, due to the exclusionary policies of the US government. If you are interested in learning more about this, we highly recommend this Lady Science podcast episode titled Women Refugee Scientists of World War II, where the hosts speak broadly on this issue.

Special thanks to both Sara Nović and Alison Kolesar for their permission to reproduce parts of their book in this blog post. You can get a copy at a library near you or purchase it here! 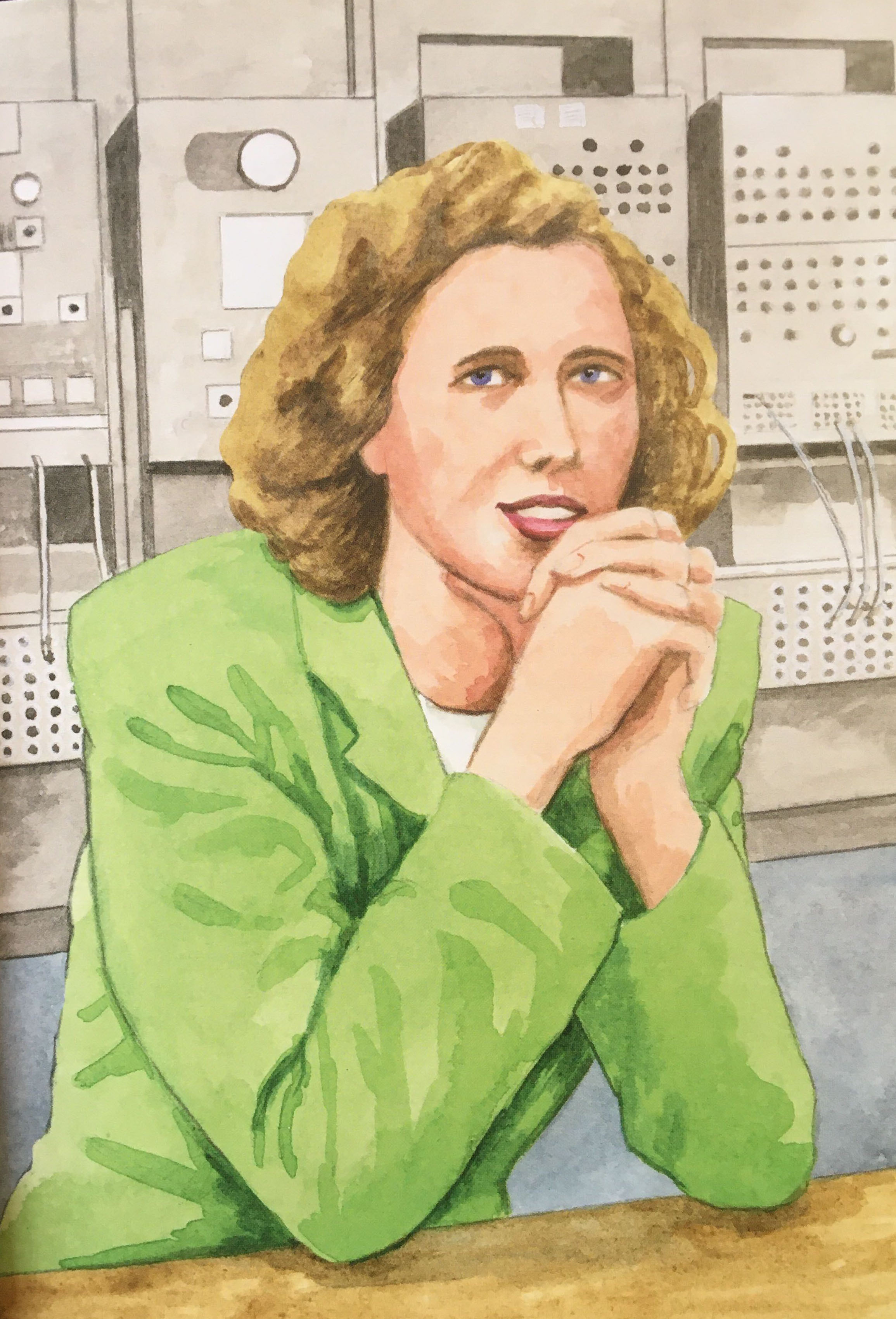 Kay McNulty, who immigrated to the United States from Ireland with her father when she was a child, graduated from Chestnut Hill College with a mathematics degree in 1942. During World War II, she worked for the US Army as a computer to calculate ballistic trajectories. She was selected as one of a handful of women who programmed the ENIAC electronic computer, making her one of the world’s first computer programmers. She worked as a programmer and software designer for the duration of her career and in 1997, was inducted into the Women in Technology International Hall of Fame.

As with many women’s roles during World War II, the contributions of McNulty and her colleagues were forgotten to such an extent that recent historians who came across a photo of women beside the ENIAC believed they had been placed there as models. The lack of acknowledgment, though, didn’t bother McNulty, whose interest in recognition lay closer to home. ‘“If I am remembered at all, I would like to be remembered as my family storyteller,’” she said. 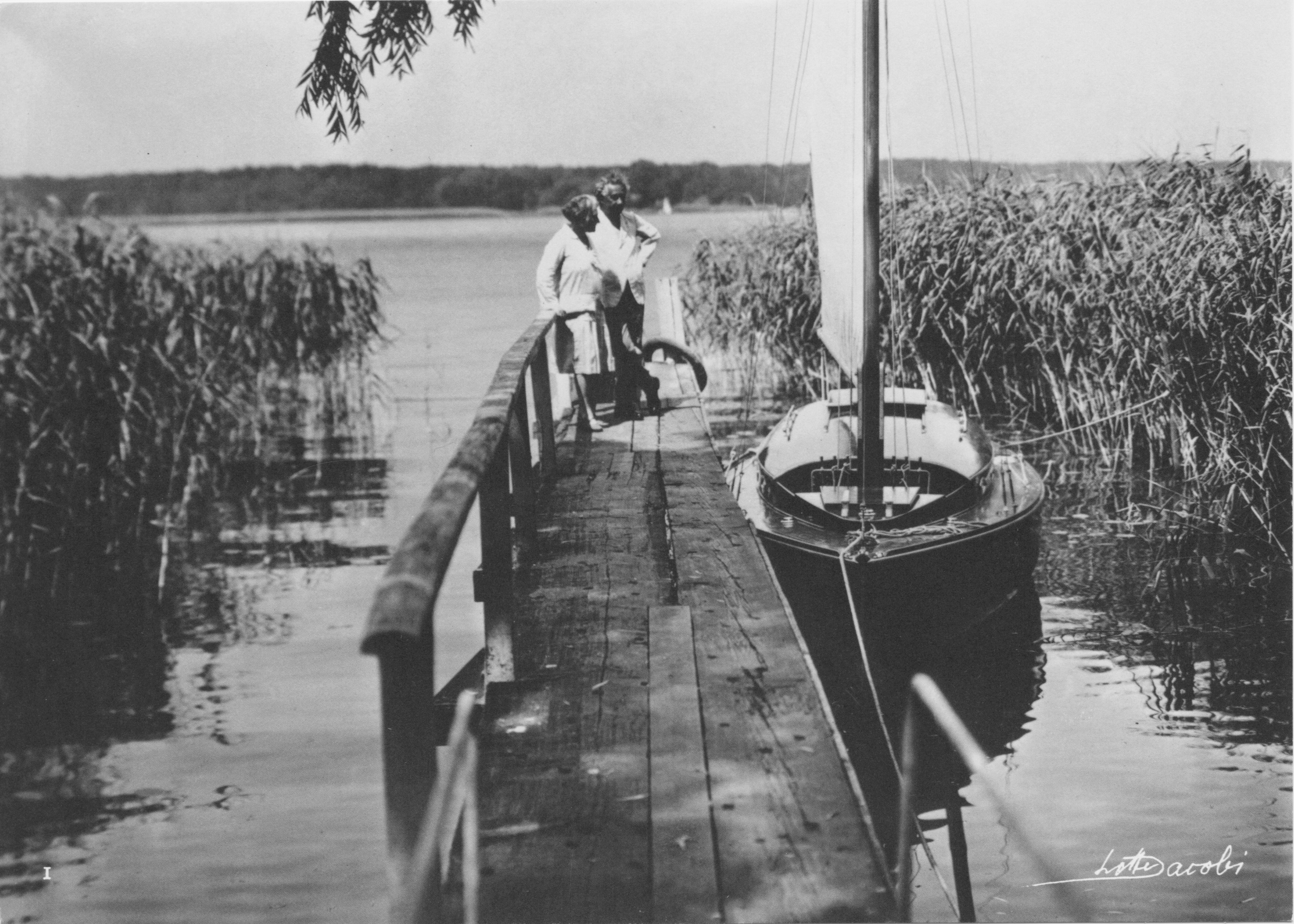 Albert Einstein, who enjoyed sailing, often spent summers at the family summer home in Caputh, Germany, just outside of Berlin. The Einsteins spent late spring through early fall at this house. To ensure a peaceful environment, Albert did not want a telephone in the house, and his wife Elsa arranged a communication system with their neighbor, who would receive calls for the Einsteins. Elsa presented the neighbor with a small trumpet. When there was a call, the neighbor would play signals unique to each family member to notify them of the call. “One time long and loud” was Albert Einstein’s signal.

In 1933, the Einsteins were forced out of Germany due to the rise of Nazism; their apartment in Berlin was raided by the Gestapo, their summer cottage was raided, and their sailboat was confiscated. The summer cottage was likely used as a Nazi Youth camp at one point. Though he received many offers, Einstein took a permanent position at the Institute for Advanced Study in Princeton, New Jersey.

The image above was taken in Gatow, Germany, around 1927, presumably during a summer full of peaceful sailing. 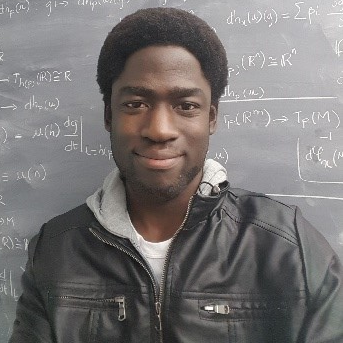 Image courtesy of Next Einstein Forum

Hallowed Olaoluwa made history in 2013 when he became the youngest person in Nigeria to earn a PhD. Born in the Central African Republic, by the age of 19, he had earned dual bachelor’s and master’s degrees in both mathematics and physics. He moved to Lagos, Nigeria where he attended the University of Lagos and got his PhD in 2 years and 10 months. Since then, he’s lived in a number of countries, working at Harvard University, the African Institute for Mathematical Sciences, Michigan State University, and at his alma mater, the University of Lagos. 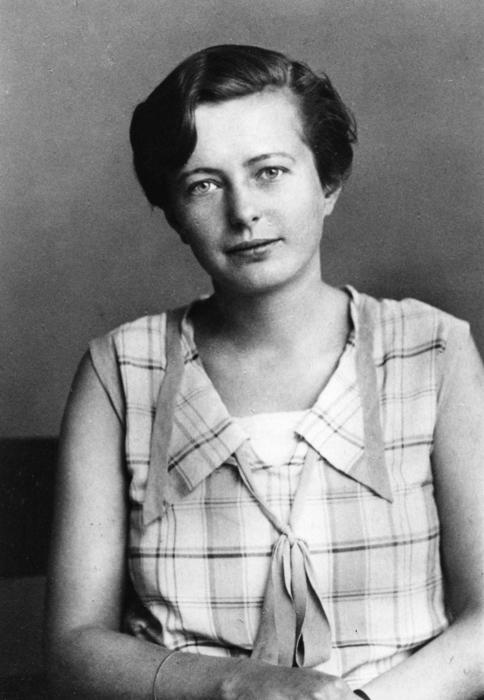 Maria Goeppert Mayer was born in Katowice, Poland, which at the time of her birth, 1906, was part of Germany. She moved with her husband, chemist Joseph Mayer, to Maryland in the United States in 1930, and became an American citizen only a few years later. She worked (sometimes without pay due to anti-nepotism policies) at Johns Hopkins, Columbia University, University of Chicago, and various government labs, until she became a Professor of Physics at University of California, San Diego in 1960. In 1963, Mayer was a recipient of the Nobel Prize in Physics for her contributions to discoveries concerning nuclear shell structure. 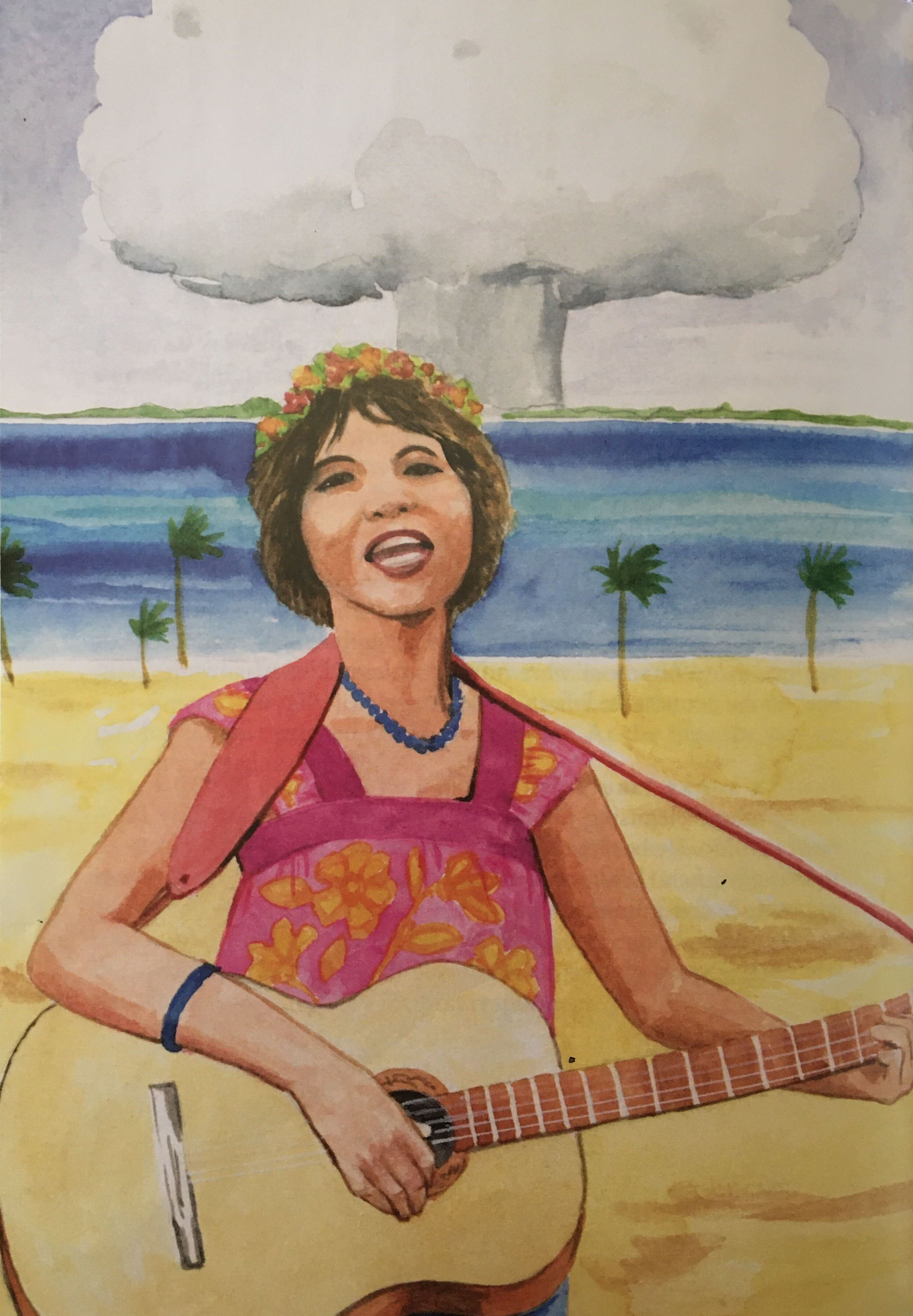 Although not a physicist herself, Darlene Keju’s life's work revolved around delivering justice to citizens of the Marshall Islands who were most certainly affected by nuclear physics.

Between 1946 and 1958, the U.S. government dropped sixty-seven nuclear bombs at several sites in the Marshall Islands… While some Marshallese were evacuated, others - residents of nearby islands - were assured of their safety. The Marshallese people would experience a host of radiation-related health problems, including birth defects and cancer, for decades to come.

Born and raised on Ebeye Island, near the Bikini Atoll nuclear testing site, Darlene saw firsthand the health effects of nuclear weapons on people in their wake. After moving to Hawaii and getting a master’s degree in public health, she worked fiercely and creatively to educate her fellow Marshallese and the world on the birth defects and serious health effects of nuclear fallout. She critiqued the U.S. government’s underreporting of the areas affected by radioactive fallout and relentlessly advocated for the U.S. to provide more healthcare initiatives and resettlement programs for those affected by nuclear testing. 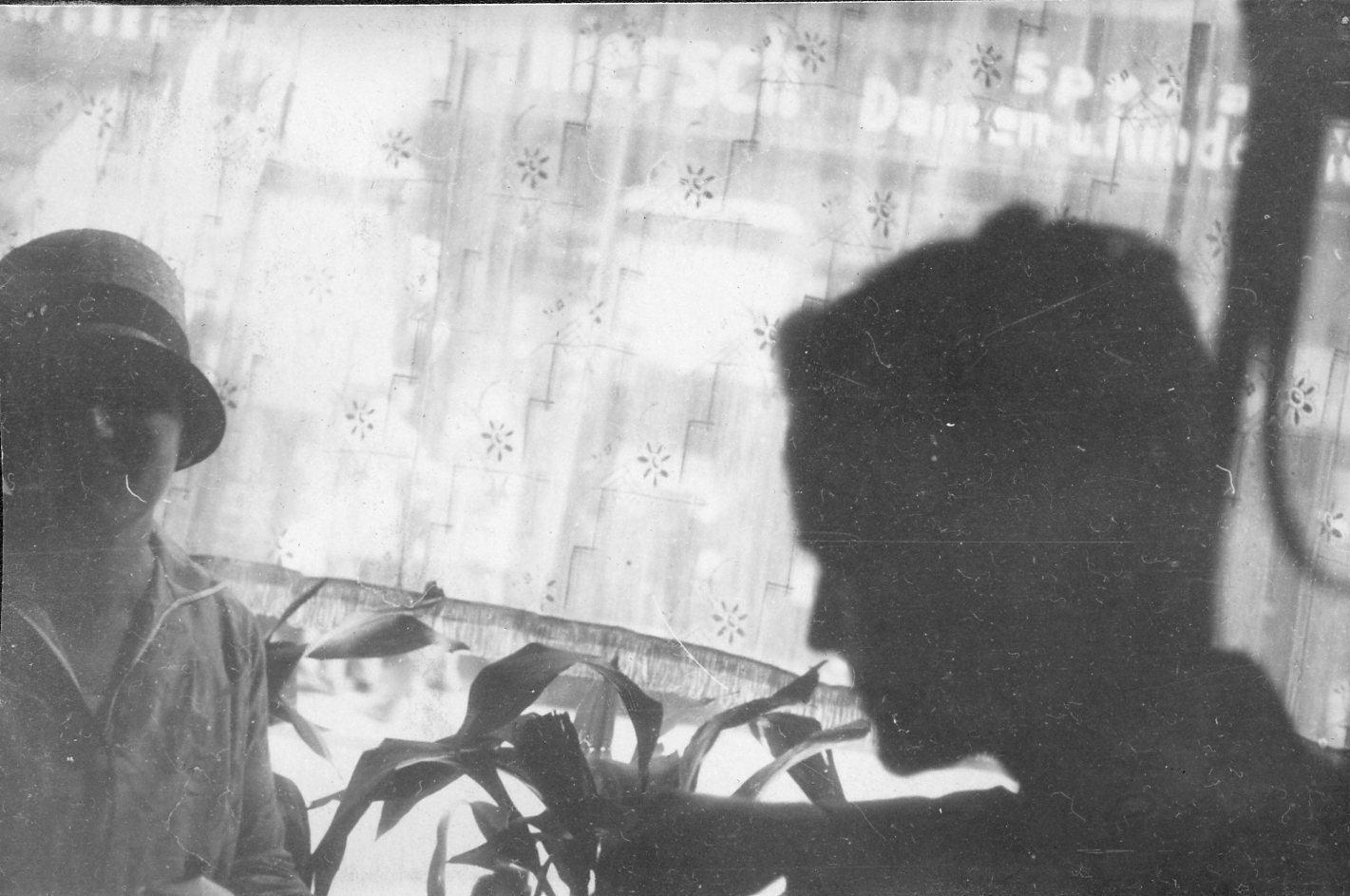 A year before German women were allowed to matriculate, Hedwig Kohn enrolled in the physics program at Breslau University in the German Empire (now Wrocław, Poland) in 1907. After obtaining her doctorate, she went on to continue researching, teaching, and advising doctoral students at the university. Her life was disrupted 1933, when she was dismissed from her position for being Jewish. After a few years of instability and contract work throughout Europe, during which time her brother was sent to the Nazi concentration camp Kauen and murdered, she was offered several positions in the United States and was able to secure a visa in 1940. Her research and teaching career in physics in the US spanned all the way to her death in 1964. 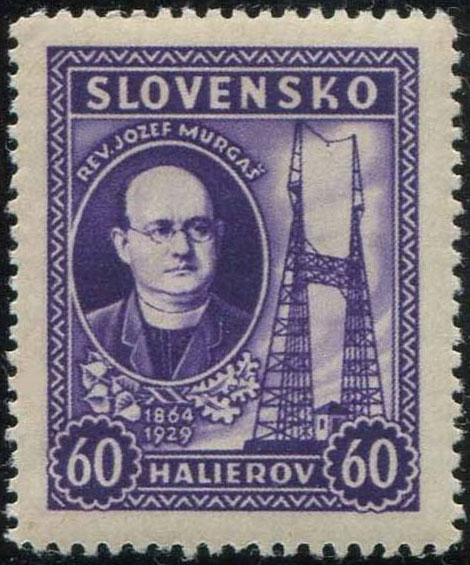 Jozef Murgaš, an ordained Slovakian priest, moved to the United States in 1896 and was installed in a church in Wilkes-Barre, Pennsylvania. He was a bit of a renaissance man, though, and was also an inventor, painter, and interested in the natural sciences - he had a particular knack for building telegraphs.

In his Pennsylvania church basement workshop, he expanded on the design, using musical tones to carry larger volumes of information wirelessly. The innovation would eventually allow for the transmission of the human voice. 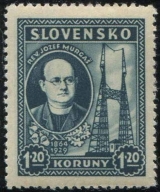 Seen here are the two official Slovakian stamps issued in 1939, the 10th anniversary of his death. In addition to a portrait of Murgaš, the stamp also features communication towers and plants - among his other talents and work in radiotelegraphy, he was an avid botanist and supporter of Slovak expats in the United States. He helped to found the Slovak League in America.

Quote from America is Immigrants by Sara Nović. Images from https://www.postoveznamky.sk/banska-bystrica-v-postovych-sluzbach-a-fil… 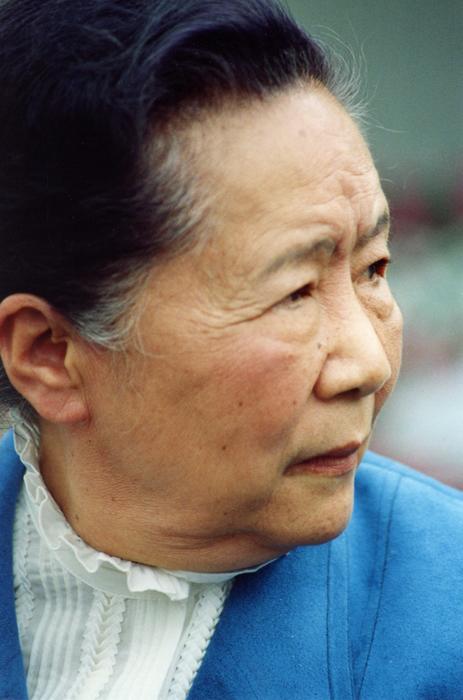 Chien-Shiung Wu was a Chinese- American physicist known for her work on the Manhattan Project and contributions to experimental and particle physics. She immigrated to America in 1936 to attend the University of California, Berkeley, then shortly after graduating, moved to the east coast where she struggled to find a position as a foreign-born woman physicist. She taught at Smith College and Princeton, then finally secured a job as a senior scientist at Columbia University where she began working on the Manhattan Project. She wouldn’t become a U.S. citizen until 1954. Wu’s experiments confirming the invalidity of the conservation of parity law led to the 1957 Nobel Prize in Physics. However, Wu was notably snubbed, as only her colleagues, Tsung Dao Lee and Chen Ning Yang, received the Prize. In her retirement, Wu regularly lectured to promote STEM education for young women. 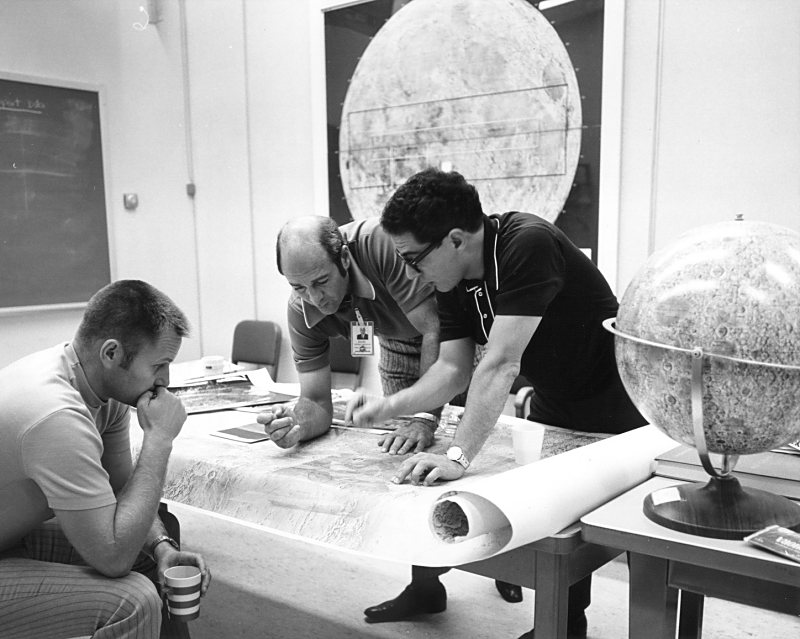 How do you pick the best spot to land on the moon? Farouk El-Baz, an Egyptian native, came to the US to study at MIT. He spent part of his career at NASA, planning and identifying landing sites and training astronauts for Apollo missions. According to Command Module Pilot Alfred Worden of the Apollo 15 mission, "After the King's [Farouk's nickname] training, I feel like I've been here before." El-Baz has also done significant research on terrestrial deserts and has found evidence of previously-unknown rivers and streams buried under sand in the Sahara through radar images. 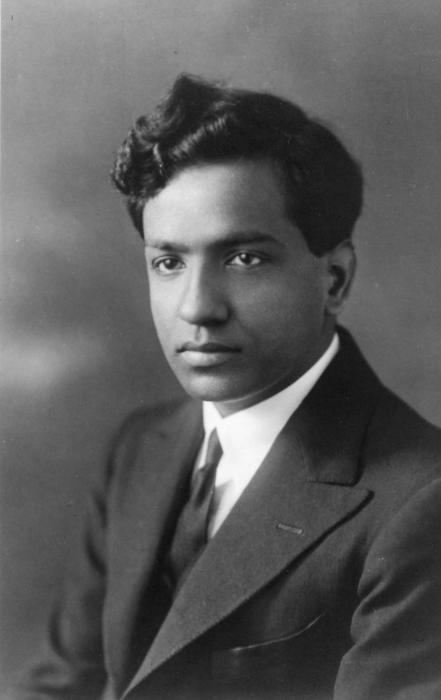 Astrophysicist and Nobel Laureate Subrahmanyan Chandrasekhar’s immigration to the United States was partially due to a dispute with another astrophysicist over his early research on what we now call black holes. After another scientist cast doubt on a theory he presented at a conference, he had trouble getting research support for this work, shifted his focus of study, and began lecturing at Harvard. Only a year after moving to America, he was offered a position at Yerkes Observatory, where he worked from 1936-1952. He spent the rest of his career in the physics department at the University of Chicago and made significant contributions to the field of astrophysics. The fate of his early research? It’s since been proven correct and we now call the maximum mass of a white dwarf star the “Chandrasekhar limit”, after the Indian-American physicist who first calculated it back in 1930. 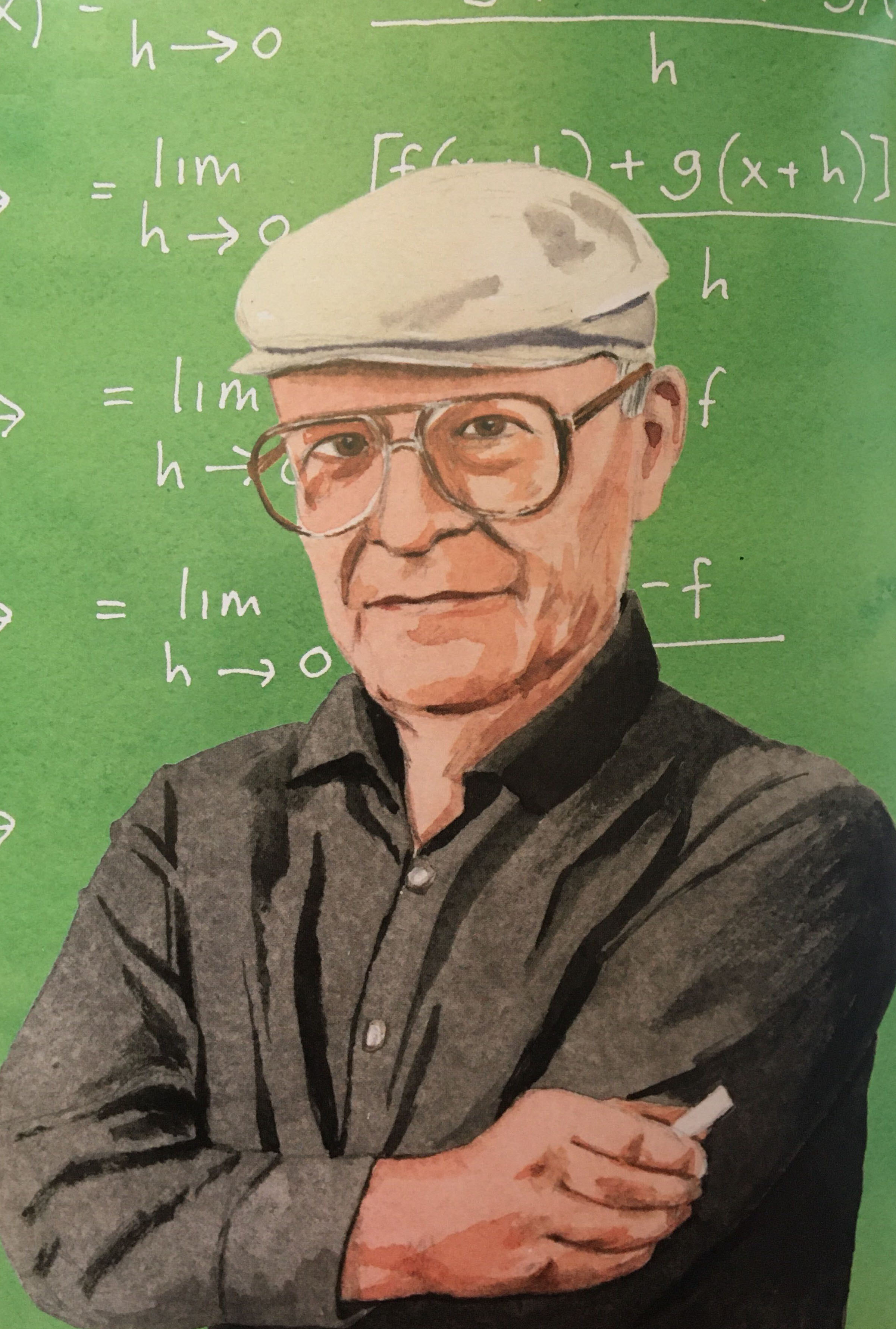 Sometimes, all you need is a good teacher. Jaime Escalante, originally from Bolivia, utterly transformed the math program at Garfield High School in East Los Angeles - a school with many Latinx immigrant students. The school’s math program was under level for a middle school standard, but Jaime Escalante wanted to teach calculus. So, after battles with the school administration, he did, and coached many students to success in Advanced Placement calculus exams throughout the 1980s. His former students, many of whom did not think about college before their class with Escalante, credit their later success to his teaching.