Since his confirmation as NASA administrator, Jim Bridenstine has expressed broad support for the agency’s scientific culture and missions, and has said his views on climate change now align with the scientific consensus. He also has advocated new approaches to designing missions to manage costs and increase nimbleness.

Since his confirmation as NASA administrator, Jim Bridenstine has expressed broad support for NASA’s scientific culture and its portfolio of research spanning the four divisions of the Science Mission Directorate (SMD) — Planetary Science, Earth Science, Heliophysics, and Astrophysics.

At a NASA employee town hall on May 17 and a Senate appropriations subcommittee hearing on May 23, Bridenstine worked to allay fears that he might not embrace NASA’s culture of scientific independence or its Earth Science portfolio. At both appearances, Bridenstine opened up about how his views on climate change have evolved.

Bridenstine also praised what he described as NASA’s exceptional qualities among federal agencies — its workforce talent and diversity, its historical achievements that have contributed to U.S. economic, political, and technical leadership, and its ability to inspire.

He promised to adhere to the National Academies decadal survey process, which draws on the broad expertise of the academic community to set NASA’s science priorities. At the same time, Bridenstine advocated greater use of emerging capabilities, such as microsatellites and commercial data buys. 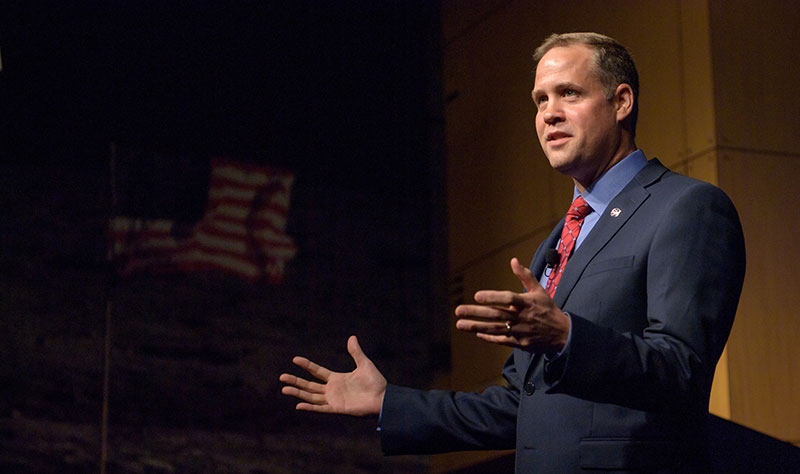 When Bridenstine was seeking Senate confirmation, Democrats argued comments he made in 2013 casting doubt on the human role in climate change were disqualifying, given the leading role NASA plays in conducting and supporting climate research. At least one also inquired why Bridenstine’s vision for NASA in his “Space Renaissance Act” excluded science. Despite unified Democratic opposition, Bridenstine was eventually confirmed on a party line vote of 50-49.

Sen. Brian Schatz (D-HI), who pressed Bridenstine on his views during his confirmation hearing, revisited the matter at the May 23 appropriations subcommittee hearing. Bridenstine concurred with Schatz that Earth’s climate is changing and humans are the primary cause, citing research conducted across federal science agencies and distilled in the National Climate Assessment. And he acknowledged these views represent an evolution from his previous remarks on the topic. When Schatz asked if he would “commit to supporting the funding, independence, and integrity of climate science at NASA,” Bridenstine replied, “Without question.”

Schatz accepted Bridenstine’s change in thinking as genuine and urged him to avoid bringing partisan politics to NASA. He advised Bridenstine,

At the May 17 town hall, Bridenstine sought to reassure NASA employees about the budgetary standing of the Earth Science Division, which sponsors NASA’s climate change-related research, saying that it is currently funded at “its second highest budget” in history. (The division was funded at $1.92 billion in fiscal year 2018, about the same amount in nominal dollars as it received the prior two fiscal years.) He continued,

One way he said he intends to ensure this is by adhering to the National Academies decadal surveys. During his exchange with Schatz, Bridenstine committed to following all decadal surveys, saying this was key to keeping the agency’s science decision-making nonpartisan.

He said NASA SMD head Thomas Zurbuchen is working to ensure NASA follows through with the recently released 2017 Earth science decadal survey. Bridenstine told Sen. Chris Van Hollen (D-MD) that, as a part of that process, NASA will evaluate the future of the Climate Absolute Radiance and Refractivity Observatory (CLARREO) Pathfinder instrument for the International Space Station and the Plankton, Aerosol, Cloud, ocean Ecosystem (PACE) orbiter, both high priorities in the 2007 Earth science decadal survey that the Trump administration has proposed to axe.

When Schatz asked Bridenstine to explain the rationale behind NASA’s recent termination of the $10 million Carbon Monitoring System (CMS) grant program, Bridenstine defended the termination, saying the agency is spending over $100 million annually on carbon measurements. Highlighting NASA’s other carbon monitoring programs — including the currently operating Orbiting Carbon Observatory 2 (OCO–2), OCO–3 which is set to launch in January 2019, and the GeoCARB satellite also in development — Bridenstine emphasized,

The bottom line, senator, is … NASA is 100% committed to understanding the carbon cycle, which is an extremely high priority that comes from the decadal surveys.

Bridenstine may not have the final word on CMS. The House appropriations spending bill for NASA calls for the program to be reinstated.

Sen. Jerry Moran (R-KS), the new chair of the appropriations subcommittee, asked Bridenstine how NASA should allocate resources within its science portfolio.

Bridenstine replied that it is “not an easy question to answer.” He pointed to the James Webb Space Telescope (JWST), NASA’s next-generation astrophysics telescope, saying the project will provide an “amazing capability … that is going to see back to the beginning of the universe,” but that challenges in developing its component technologies had led to overruns in cost and schedule. Echoing arguments Zurbuchen recently made at the National Academies, he warned that such overruns “crowd out other missions.”

Bridenstine recommended that instead of “another $8 billion project that goes through multiple decades,” a clear reference to JWST, NASA should consider building “architectures that deliver that same civilization-changing science but … do it in a way where there is less risk involved.” He suggested NASA and the National Academies divide efforts to achieve scientific goals among multiple missions with lifecycle costs in the range of $200 million or less. If a smaller mission gets behind schedule or over budget, he explained, it would not impact other missions in development.

Bridenstine said NASA must ensure the next major astrophysics space telescope in development — the Wide Field Infrared Survey Telescope (WFIRST), which will investigate dark energy and exoplanets that orbit distant starts — is not plagued by the same problems. He predicted that there is a “90 percent” chance that Congress will continue funding WFIRST, despite the administration’s budget proposal to cancel it.

Bridenstine said advances in satellite technology are making a disaggregated approach more feasible, arguing, "There is merit to thinking about things differently going forward, especially given that there’s a miniaturization of electronics, there’s an increase in performance of satellites." He also embraced the contributions of the commercial sector, which he said is already playing a growing role in helping NASA obtain more and better scientific data.

In his appearances, Bridenstine emphasized the importance of science to NASA’s high-level exploration missions of returning humans to the Moon and later sending a crewed mission to Mars. He said certain science missions, like the recently launched Mars InSight lander, a Mars helicopter set to accompany the Mars 2020 rover, and a series of forthcoming lunar science missions, will directly contribute to these long-term exploration goals.

Bridenstine also argued that NASA possesses certain exceptional traits among federal agencies and national institutions. At the town hall, he highlighted NASA’s workforce diversity and talent and its historical contributions to establishing U.S. economic, political, and technical dominance during the Cold War.

When at the hearing Moran remarked that NASA “provides what no other agency, no other federal program can do” to inspire youth to enter STEM fields, Bridenstine concurred. He attested to a life-changing visit he made during sixth grade summer camp to a wind tunnel, which motivated him to pursue a career in naval aviation. Later, as director of the Tulsa Air and Space Museum, he said he saw “firsthand” how the museum changed the way children view themselves and their future lives and careers.

Asked about the Trump administration’s proposal to terminate NASA’s Office of Education, a proposal Congress fully rejected in fiscal year 2018, Bridenstine said NASA is considering renaming it the “Office of STEM Engagement” to better capture its purpose and avoid confusion with the Department of Education. He continued,

I can tell you this: There is no agency in the federal government that can do what NASA can do when it comes to inspiration.