The Senate Energy and Natural Resources Committee’s long-awaited energy innovation legislation is in limbo after a dispute broke out during floor debate over proposed add-on provisions. 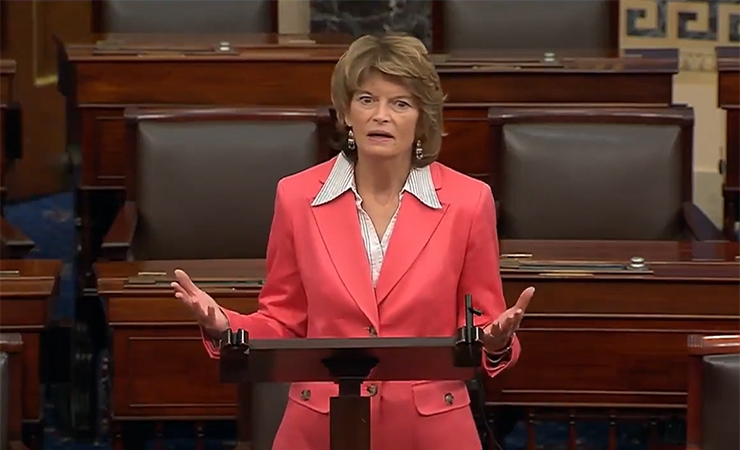 Senate Energy and Natural Resources Committee Chair Lisa Murkowski (R-AK) urges her colleagues to advance the American Energy Innovation Act, a bill she has worked on over the past year.

A sweeping energy innovation policy bill that the Senate Energy and Natural Resources Committee developed over the past year hit a roadblock on March 9 when it failed to advance on the Senate floor. Under chamber rules, the measure required 60 votes to proceed toward a final vote, but it secured only 47, with 44 senators voting against it.

The bill’s sponsors, Committee Chair Lisa Murkowski (R-AK) and Ranking Member Joe Manchin (D-WV), had anticipated it would move swiftly when they unveiled a 555 page draft on Feb. 27, touting it as “process-driven” and “consensus-based.” Yet, partly due to the legislation’s strong prospects, it attracted the attention of senators eager to attach amendments, including a provision on hydrofluorocarbons that sparked the impasse.

Senate Majority Leader Mitch McConnell (R-KY) has left the door open for a future attempt to advance the legislation, but it is unclear when that may occur. In the meantime, a parallel House effort to update policies for energy R&D programs is still in progress.

Titled the American Energy Innovation Act, Murkowski and Manchin’s legislation consolidates dozens of bills that they advanced out of committee over the last year. In her push to bring the bill to the finish line, Murkowski has framed it as an essential modernization of U.S. energy policy. Congress has not passed such a broad update since the Energy Independence and Security Act of 2007.

Among its numerous provisions, the new bill would modify policy for most of the Department of Energy’s applied R&D programs. It would, for instance, require the department to support demonstrations of advanced nuclear reactors, place a new emphasis on marine energy, and expand efforts in geothermal energy.

DOE’s fossil energy R&D program would be modified significantly under the bill, with an increased focus on carbon capture, storage, and utilization technologies and a new R&D program on capturing carbon dioxide from the atmosphere. Manchin, whose state is heavily invested in fossil energy, has argued the U.S. should export carbon-reducing technologies to countries that are increasing their energy production using fossil fuels.

Beyond energy production, the bill contains a number of provisions focused on industry, including ones establishing DOE-led technology development and technical assistance programs for reducing industrial greenhouse gas emissions. Other provisions in the bill focus on issues such as energy efficiency, the security and modernization of the electric grid, “smart” manufacturing, workforce development, and mineral security.

Despite the bill’s focus on clean energy and energy efficiency, Murkowski and Manchin are not emphasizing its relevance to climate policy as much as they did when they kicked off their effort last year. Introducing the legislation on the Senate floor on March 2, Murkowski acknowledged it does not present an aggressive pathway for eliminating carbon emissions, saying,

“What is important for members to know is this package without question is a good step, is a strong step, a necessary step in the right direction to continue to reduce our nation’s greenhouse gas emissions. … To say that perhaps we should not pass a good bill because it doesn’t go far enough, in my view, is a mistake. That will result in absolutely nothing happening.”

During floor debate, senators flocked to attach amendments to the bill, such as one to provide incentives for local governments to adopt model building codes and another to extend and expand certain clean energy tax credits. However, the bill's progress was ultimately derailed by a dispute surrounding an amendment to phase down the production and use of hydrofluorocarbon refrigerants, which are potent greenhouse gases.

The measure, sponsored by Sens. John Kennedy (R-LA) and Tom Carper (D-DE), was identical to the standalone American Innovation and Manufacturing Act they introduced in October and which now has 32 additional bipartisan cosponsors. But it was opposed by the White House and Senate Environment and Public Works Chair John Barrasso (R-WY), who argued it should have to go through his committee.

Reacting to Senate leaders’ refusal to hold a vote on the amendment, Kennedy retaliated by blocking action on all other amendments. “This isn’t about the bill anymore to me. This is about honor and respecting your colleagues,” he told reporters. While the energy innovation bill never had universal assent, the spiraling disagreement over amendments sapped crucial support for moving it ahead from Democrats and Republicans alike.

Following the vote, Murkowski declared herself “incredulous,” remarking in a statement, “It is beyond frustrating to have our bill, which contains priorities from more than 70 senators, held up by an unrelated dispute that was never part of our discussions in the lead-up to this floor process. We will regroup and look for a path forward, but finding one will require members to be more reasonable and accommodating than they have been in the last week, and certainly more so than they were today.”

In 2016, Murkowski nearly succeeded in shepherding a major bipartisan energy policy bill through Congress, only to have the effort break down at the last minute. She has the rest of this year to finish the job before she reaches her term limit as chair of the Energy and Natural Resources Committee.

House effort still in the works

Meanwhile, the House Science Committee is continuing to develop its own package of energy legislation, which is geared largely toward updating policy for DOE’s applied R&D programs. Some of the bills it has produced were also adapted into the Senate bill, including ones dedicated to solar and wind energy and another that would recommend increasing the Advanced Research Projects Agency–Energy’s budget to $750 million by fiscal year 2024.

Although the committee has reached bipartisan agreement on some of its bills, such as the ARPA–E measure and a geothermal R&D bill, there is currently a partisan split over whether the effort should generally focus on applied or basic research. Signaling its priorities, the committee’s Republican minority recently introduced a bill that would recommend roughly doubling over 10 years the budgets of the DOE Office of Science and several other science agencies with large basic research portfolios.

Committee Democrats and Republicans have expressed interest in working to reconcile their respective agendas, but doing so could take some time. Adam Rosenberg, a member of the committee’s Democratic staff, said last month a legislative package could be put together “within a few months” and that work was ongoing. He added that the Democrats would also support passing bills individually. “We’re happy to take as many shots on goal to get as much of this into law as possible," he remarked.