The Senate is proposing mostly steady funding for science agencies for fiscal year 2021, with a few notable exceptions. 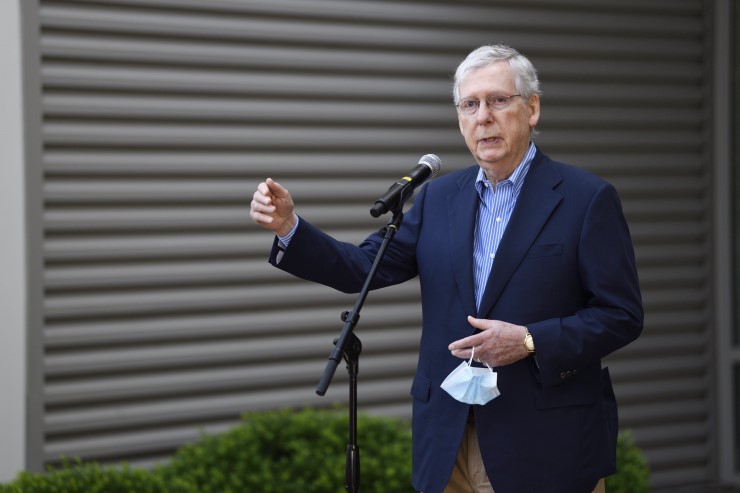 On Tuesday, the Senate Appropriations Committee released its versions of the 12 bills that will set fiscal year 2021 spending levels across federal agencies. The House released its counterpart bills last spring, but the Senate had declined to follow suit until now, just as negotiators are gearing up to finalize a spending package covering the entire government.

Since the fiscal year began on Oct. 1, the government has been operating on stopgap funding that is due to expire on Dec. 11. Congress must pass its final package or a new extension by then to avoid a government shutdown. Although the sides have expressed optimism about reaching an agreement, one complicating factor is that Congress is also working toward a new pandemic relief package. Senate Majority Leader Mitch McConnell (R-KY) has said he will press to pass appropriations and a separate relief bill by year’s end, while Senate Democrats have raised the possibility of adding relief spending to the regular appropriations bills.

For science agencies, the biggest differences between the Senate and House bills are the billions of dollars in additional spending the Senate proposes for the National Nuclear Security Administration and National Institutes of Health. Its bills also include no equivalent of the House’s proposals for billions of dollars in one-time “emergency” stimulus spending at NIH and the Department of Energy. Other notable Senate proposals are summarized below, and detailed comparisons of the different proposals at play are available in the FYI Federal Science Budget Tracker. 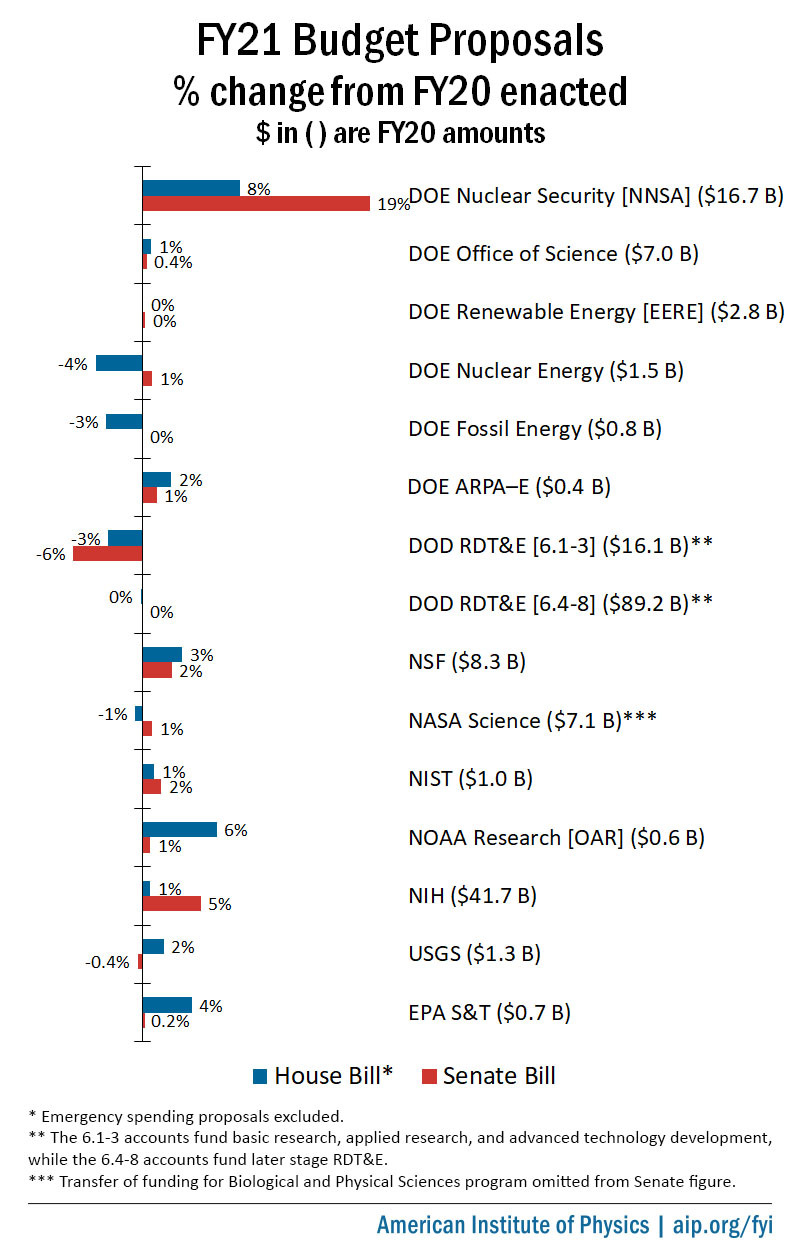 The House and Senate proposals for the Department of Energy would provide essentially flat funding for the Office of Science, with similar allocations among its programs, except for the Fusion Energy Sciences program, for which the Senate proposes a 5% cut to $640 million and the House a 1% increase.

ITER. The Senate’s cut is accounted for by a proposal to decrease funding for the France-based ITER fusion energy project from $242 million to $211 million, of which at least $54 million would go toward meeting cash obligations. The House proposed $260 million, including at least $100 million in cash.

Major user facility upgrades. The Senate proposes steady funding for upgrade projects at Oak Ridge National Lab’s Spallation Neutron Source, with a ramp-down in spending on the Proton Power Upgrade from $60 million to $55 million and an increase from $37 million to $42 million for early work on the Second Target Station. The House had proposed significantly cutting spending on the two projects, though it did include substantial funding for them in its emergency proposal. Like the House, the Senate would continue funding for all other major user facility upgrade projects, with relatively small differences between their proposals.

Renewable energy grid integration. Within a flat topline for energy efficiency and renewable energy, the Senate would create a new program dedicated to grid integration with a $40 million budget drawn from the solar, wind, water, and geothermal energy programs. It also recommends spending $10 million to develop and demonstrate an “energyshed” system for managing grids in regions with a large proportion of renewable energy sources.

Versatile Test Reactor. The Senate proposes cutting the budget for the planned Versatile Test Reactor irradiation facility from $65 million to $45 million, whereas the House proposed level funding and the Trump administration requested an increase to $295 million. Senate appropriators express concern that the multi-billion-dollar project does not have buy-in from private or international partners and requests that DOE produce a plan for completing the reactor as a public–private partnership “with an option for a payment-for-milestones approach.”

Advanced reactor technologies. Whereas the House proposed zeroing out funding for the Transformational Challenge Reactor, the Senate meets DOE’s request to increase its funding by $7 million to $30 million. Based at Oak Ridge National Lab, the project entails building a microreactor using advanced manufacturing techniques. The Senate also proposes to ramp up funding for DOE’s new Advanced Reactor Demonstration program from $230 million to $280 million, while the House proposed $240 million.

Stockpile modernization. The Senate bill would increase NNSA’s budget by $3.1 billion to $19.8 billion, slightly exceeding the requested level and well outstripping the House proposal of $18.0 billion. Whereas the House is skeptical of the pace and scope of NNSA’s plans to modernize the U.S. nuclear weapons stockpile, the Senate bill fully funds the agency’s requests for beginning a new warhead project and ramping up production of plutonium warhead cores at Los Alamos National Lab and the Savannah River Site.

Stockpile R&D. The Senate likewise proposes to increase funding for Stockpile Research, Technology, and Engineering programs by 10% to $2.80 billion as requested, exceeding the House’s proposal of $2.66 billion. It does, though, share concerns with the House about cost growth on a flagship project to develop a new imaging capability for subcritical plutonium implosions.

Nonproliferation. Funding for nuclear nonproliferation activities would drop 3% under the Senate proposal to $2.10 billion, largely due to the closeout of a terminated plutonium conversion project. Meanwhile, the House proposed a 3% increase to $2.24 billion, with much of the additional resources directed toward nuclear detonation detection R&D and efforts to secure nuclear materials domestically and abroad.

Basic research. After a period of rapid growth, DOD’s budget for research, development, test, and evaluation activities is set to level off, with the House and Senate both proposing slight decreases to $107 billion. However, the Senate bill would cut DOD’s $2.60 billion basic research portfolio by 8%, near the 11% cut requested by the department, whereas the House proposed a slight increase. Much of the Senate’s cut would fall on university-based research.

Artemis. The Senate’s proposal for NASA’s Artemis program effectively puts an end to the Trump administration’s goal of returning astronauts to the lunar surface in 2024. While the $2.12 billion proposed for human exploration R&D activities exceeds the House’s $1.56 billion proposal, it is well short of NASA’s $4.72 billion request, most of which was for development of crewed lunar landers. The Senate specifies only $1 billion for lander development, explaining,

While the committee supports the mission of returning U.S. astronauts to the surface of the Moon, the lander element represents the largest remaining cost, schedule, and technical risk, and has yet to be selected. This uncertainty makes it difficult to analyze the future impacts that funding the accelerated Moon mission will have on NASA’s other important missions, not to mention the programs, projects, and activities funded elsewhere in the bill.

Europa Clipper. A delayed Artemis timeline could free up a Space Launch System rocket for the Europa Clipper’s launch in 2025. Whereas the House would strongly encourage the mission to use SLS, the Senate bill continues to strictly require it. Although using SLS would increase launch costs by hundreds of millions of dollars, it would also reduce transit time by years.

Heliophysics. The Senate proposes to increase the Heliophysics Division’s budget by 7% to $776 million, contrasting with a 13% cut proposed by NASA and the House that stems from a temporary dip in the funding profile for the Interstellar Mapping and Acceleration Probe. The Senate’s additional funding would be spread throughout the division, including on early work for two new projects, the Geospace Dynamics Constellation and the DYNAMIC (Dynamical Neutral Atmosphere-Ionosphere Coupling) mission.

Mission terminations. Like the House, the Senate rejects the Trump administration’s proposal to terminate two Earth science missions (PACE and CLARREO Pathfinder), the Roman Space Telescope, and the Stratospheric Observatory for Infrared Astronomy. Concerning SOFIA, the Senate states NASA should instead determine the value of continuing the mission through its next senior review and suggests it carry forward funds it did not use in fiscal year 2020 due to pandemic-related reductions in operations.

Research programs. NSF’s main research account would increase 3% to $6.91 billion under the Senate’s bill, $60 million less than the House’s proposal. The Senate indicates it supports efforts to prioritize “Industries of the Future” such as quantum information science and artificial intelligence, while directing NSF to maintain funding for “core research” at no less than the current level.

Major facilities construction. The House and Senate match the requested funding for ongoing construction of the Vera C. Rubin Observatory and Large Hadron Collider upgrades, while the Senate adds that it “looks forward to working with NSF to understand the impact of extended construction shutdowns on the cost and execution of these large projects.” Both the House and Senate also exceed the $65 million requested for mid-scale infrastructure, specifying $71 million and $75 million respectively.

Research programs. The budget for NIST’s main research account would increase 4% to $787 million under the Senate bill, $3 million below the House proposal. Both prioritize quantum information science and artificial intelligence, with the Senate specifying NIST increase funding for each by $7 million and $4 million, respectively, while the House proposes increases of at least $8 million and $10 million.

Facilities repair. In the face of NIST’s proposal to halve funding for research facility construction and repair to $60 million, the Senate would provide $98 million, $13 million above the House proposal.

Oceanic and Atmospheric Research. The Senate bill would provide mostly flat funding to programs in NOAA’s Office of Oceanic and Atmospheric Research, whereas the House proposed a 6% increase to $626 million to expand weather and climate research programs. However, the Senate places a higher priority than the House on the planned Earth Prediction Innovation Center, a marquee initiative by NOAA to crowdsource improvements to its weather models.

The Senate proposes to increase the NIH budget by $2 billion to $43.7 billion, which would represent the sixth straight year of multibillion-dollar increases. The House only proposes an increase of $275 million, though it would provide an additional $5 billion in one-time stimulus funding. House Republicans objected to the stimulus funding mechanism, arguing it subverts a bipartisan agreement on budget caps for the year and complicates negotiations over a final appropriations measure.