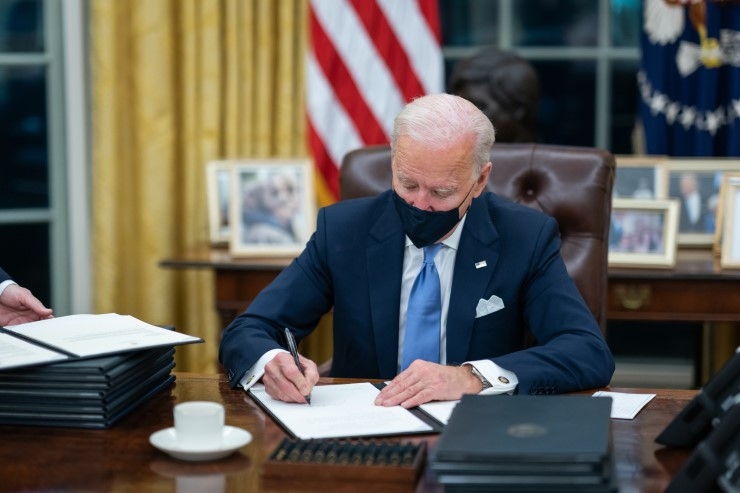 Four months into his administration, President Biden’s approach to climate change is beginning to cohere around two executive orders he issued his first week in office.

Signed on Inauguration Day, the first order set an urgent tone through high-priority moves, such as rejoining the Paris climate agreement, initiating an update of government benchmarks for the social cost of greenhouse gases, and reversing a number of Trump administration actions on environmental policy.

The second order, issued Jan. 27, established an array of policymaking mechanisms and outlined an agenda on matters such as climate resilience, environmental justice, and climate-related economic opportunities, with many action items due within 60, 90, and 120 days.

As that timeframe reaches its end, administration actions to date have set the stage for systematic efforts to address climate change across agencies that outstrip the ambitions of previous administrations. Additional details about future plans will be spelled out in agencies’ budget requests to Congress, scheduled for release this week.

Also in the White House, marine biologist Jane Lubchenco, formerly head of the National Oceanic and Atmospheric Administration, has joined the Office of Science and Technology Policy as deputy director for climate and environment. At the National Security Council, attorney and former State Department official Melanie Nakagawa occupies a staff position dedicated to climate and energy issues.

At the Department of Energy, Energy Secretary Jennifer Granholm is putting climate front and center in her messaging. DOE is also taking such concrete steps as reinvigorating its Loan Programs Office and reviving an initiative to train workers for jobs related to clean energy technologies. In addition, DOE personnel have a leading role in the new Interagency Working Group on Coal and Power Plant Communities and Economic Revitalization, which will recommend policies for alleviating regional job losses stemming from decreased fossil fuel use.

Other agencies are building up policymaking capacity on climate matters as well. For instance, the Interior Department has set up a Climate Task Force, the Department of Homeland Security a Climate Change Action Group, and the Treasury Department a Climate Hub. NASA has established the position of senior climate adviser, and a climate adviser appointed to the Agriculture Department in January has since been nominated to be the department’s under secretary for farm production and conservation.

Future actions will address links between health and climate. Biden’s second order directed the Department of Health and Human Services to set up an Office of Climate Change and Health Equity and created an Interagency Working Group to Decrease Risk of Climate Change to Children, the Elderly, People with Disabilities, and the Vulnerable.

The order also revived a dormant interagency working group on environmental justice, elevating it to the status of a council, and established an advisory group to guide that body.

Efforts are currently underway to refresh and expand climate-related threat assessments. The Department of Defense established a Climate Working Group in March and last month initiated a yearlong assessment of hazards to military installations. Biden’s second order also called for DOD to conduct a “climate risk analysis” and the director of national intelligence to prepare an estimate of climate change impacts, both due soon. Last week, Biden issued another order initiating work on an administration-wide strategy for climate-related financial risks.

Biden’s most prominent initiative to date has been the Earth Day virtual summit he hosted in April, which was coordinated with a series of minor agreements reached ahead of the next United Nations climate conference later this year. On May 7, Biden issued an executive order establishing a temporary State Department Climate Change Support Office to assist Kerry and other diplomats in further negotiations. 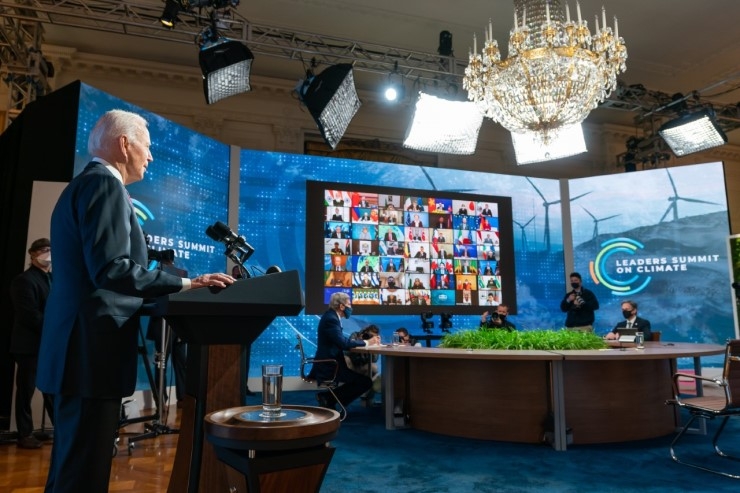 President Biden speaking at the Climate Leadership Summit on Earth Day in April.

In setting out his policy agenda, Biden’s second order formally established that his administration aims to “achieve net-zero emissions, economy-wide, by no later than 2050” in order to help meet the Paris agreement goal of limiting global warming to 1.5 degrees Celsius.

Toward that end, the administration has set newly ambitious interim targets, led by Biden’s commitment at the April summit to halve U.S. greenhouse gas emissions from their 2005 levels by 2030. These also include new technology goals, such as further lowering the cost of solar energy to about half its current level, also by 2030.

The administration is now pressing Congress for funding to support aggressive actions to meet such targets. Biden’s American Jobs Plan proposes to spend hundreds of billions of dollars on decarbonizing energy and transportation infrastructure and upgrading its resilience to climate effects. In addition, the plan calls for about $35 billion in climate-related R&D spending, which is also part of the administration’s efforts to revive the “Mission Innovation” initiative to encourage other countries to increase their R&D spending as well.

On the regulatory side, the Environmental Protection Agency has already moved to limit industrial use of hydrofluorocarbons, a potent class of greenhouse gases, in line with a law enacted in December. However, the agency has indicated regulations on carbon emissions from existing power plants are some way off as it will develop an entirely new rule rather than revive the Obama administration’s Clean Power Plan. The agency also eventually plans to develop regulations covering carbon emissions from vehicles and other sources.

Administration-wide, the social cost of carbon update will inform regulatory cost-benefit analyses, and the White House is expected to seek a clean electricity standard from Congress, statutorily requiring utilities to phase out fossil fuels.

Curbing emissions and accelerating energy transitions will be one of the most hotly contested aspects of Biden’s agenda. Republicans have, for instance, already protested Biden’s Inauguration Day revocation of the permit for the Keystone XL pipeline as causing job losses, and 21 Republican state attorneys general have filed suit against the move. Republicans are also challenging claims that clean energy will create an abundance of new employment opportunities.

Meanwhile, the administration is aiming to ensure its long-term climate agenda yields short-term benefits. Aside from its coal and power plant community working group, it is, for instance, planning to set up a “Civilian Climate Corps” that will recruit and train workers for conservation and resilience efforts.

In addition, the administration is pursuing an initiative called “Justice40,” holding that 40% of the benefits of environmental actions should flow directly to disadvantaged communities, including the “fenceline” and “frontline” communities most vulnerable to pollution and climate hazards. Earlier this month, the environmental justice advisory council issued interim recommendations about what sorts of government programs would yield such benefits, with many R&D and technology deployment projects not qualifying.

Stepped-up efforts to respond to climate change across economic sectors and geographic regions are expected to draw on tailored scientific evaluations of current and expected impacts. A principal source of such evaluations is the quadrennial National Climate Assessment and the tools it produces.

In an interview with the Washington Post, Kuperberg anticipated the next edition of the assessment will produce more customizable data and aim to reach new audiences, saying, “Everybody from farmers, transportation managers, energy producers, and citizens in small and large cities will face challenges from climate change.”

Kuperberg is also assisting OSTP in identifying a new assessment director to replace atmospheric scientist Betsy Weatherhead, whom the Trump administration appointed in November. Although her selection was uncontroversial, the Biden administration reassigned her in April, drawing some Republican scrutiny.

Meanwhile, individual science agencies are stepping up their own climate efforts. NASA announced yesterday that it is coordinating upcoming Earth observation missions under a unified program called the Earth System Observatory, implementing recommendations from the 2017 Earth science decadal survey.

Biden’s pick to lead NOAA, Rick Spinrad, also previewed a more systematic approach to climate at his nomination hearing last week. “If confirmed, I would take a fully integrated perspective to ensure the agency is imparting the best-in-class Earth system intelligence, providing, for example, climate services and products in fisheries, weather, and oceans — in an equitable and just manner — for its many stakeholders,” he said.

Update: The description of Weatherhead's reassignment has been updated to omit a misleadingly succinct summary of details drawn from the linked Washington Post article.