Funding for the Department of Energy’s Office of Science is increasing marginally in fiscal year 2021. Most of its component programs will receive steady funding, though office-wide initiatives in quantum information science and artificial intelligence are receiving substantial boosts, and work is ramping up on the proposed Electron Ion Collider and Cosmic Microwave Background-S4 projects.

With last month’s enactment of fiscal year 2021 appropriations legislation, the Department of Energy Office of Science’s budget of exactly $7 billion is rising by $26 million, with each of its six programs funded at or just above their fiscal year 2020 levels. The appropriation does not include any “emergency” stimulus spending on research facilities, as House Democrats had proposed, but all current facilities projects will receive continuing funding.

An explanatory statement accompanying the legislation provides detailed funding and policy direction, and language from the House Appropriations Committee report conveys additional direction unless specifically negated in the final statement. The Senate Appropriations Committee did not formally submit its report, but language from a publicly released draft is incorporated in the explanatory statement. For summary tables and detailed figures, consult the FYI Federal Science Budget Tracker. 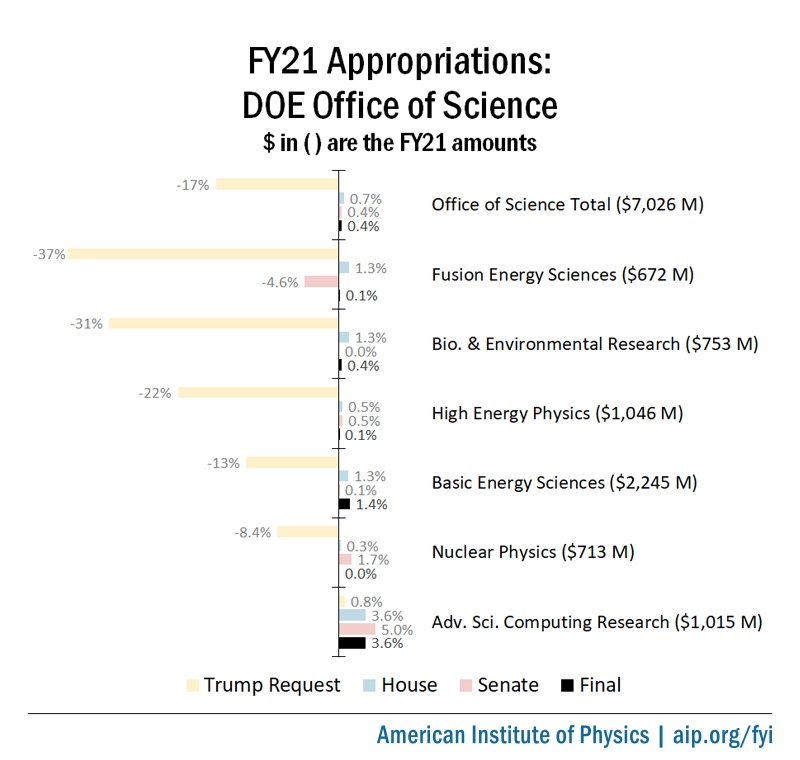 QIS and AI. Congress directs the Office of Science to increase funding for artificial intelligence from $71 million to at least $100 million and for quantum information science from $195 million to at least $245 million. Of the QIS funding, $125 million is for the five research centers DOE established last year in accord with the National Quantum Initiative Act.

Negative emissions technologies. The Office of Science is instructed to continue collaborating with DOE’s Office of Fossil Energy and Office of Energy Efficiency and Renewable Energy on developing methods of removing carbon dioxide from the atmosphere. The amount specified by Congress for the Office of Science’s contribution is increasing from at least $20 million to at least $22.5 million, which includes at least $7.5 million for direct air capture technology. This funding is drawn from the office’s Basic Energy Sciences and Biological and Environmental Research programs.

Collaboration with NIH. Congress continues to encourage DOE to expand collaboration with the National Institutes of Health, and provides $1 million for projects that leverage DOE’s data and computational capabilities.

Following several years of significant growth, the HEP budget is remaining essentially flat at $1.05 billion. Increasing construction costs within that budget could put further pressure on funding for research and technology R&D, which a recent independent review flagged as a major concern for the physics community.

LBNF/DUNE and PIP-II. The budget for the flagship Long-Baseline Neutrino Facility and Deep Underground Neutrino Experiment project is staying even at $171 million, while the budget for the associated Proton Improvement Plan II accelerator upgrade at Fermilab is increasing from $60 million to $79 million. Congress also directs DOE to allocate at least $30 million for the Sanford Underground Research Facility in South Dakota, where the DUNE detectors will be installed. Appropriators did not comment on the 40% increase in total project cost for LBNF/DUNE that DOE reported in its budget request, and which stemmed from increases in civil construction costs and shortfalls in partner contributions.

LHC upgrades. Congress notes in the explanatory statement that it does not provide any specific funding or policy direction regarding DOE’s contribution to the high-luminosity upgrade to the Large Hadron Collider at CERN and associated upgrades to the CMS and ATLAS detectors. All three projects have been delayed due to the pandemic, and DOE reports that the baseline schedule and cost estimate for the accelerator project will require revision. The House and Senate had both originally proposed flat funding of $100 million for the projects.

Mu2e and SuperCDMS. DOE reported at the last meeting of the High Energy Physics Advisory Panel that the muon-to-electron (Mu2e) conversion experiment at Fermilab and the SLAC-led Super Cryogenic Dark Matter Search project were each experiencing delays with critical components prior to the pandemic and that pandemic-related delays will cause both projects to exceed their baseline cost targets. Both projects’ budgets had been fully appropriated and Congress is now providing an additional $2 million for Mu2e and notes that its appropriation for the HEP program “supports activities toward the completion” of SuperCDMS.

Rubin Observatory. DOE also reported that LSSTCam, a central component of the Vera C. Rubin Observatory, requires an additional $5.5 million in operating funds to complete assembly due to pandemic-related disruptions. Congress directs DOE to allocate at least $18.5 million to operation of the observatory and notes that, as with SuperCDMS, it supports activities toward completion of the telescope.

CMB-S4. Congress directs DOE to allocate at least $6 million in initial funding for the Cosmic Microwave Background-Stage 4 experiment, exceeding the requested $1 million. The project is among the few remaining projects recommended by the 2014 Particle Physics Project Prioritization Panel (P5) report that have not yet been started. It is expected to cost between $320 million and $395 million.

Although the new Energy Act calls for an immediate increase in FES funding to $996 million, the program’s budget is remaining essentially flat at $672 million. The budget for activities other than construction of the France-based ITER facility is increasing by $1 million to $430 million. This amount is just below the starting point for budget scenarios used in the recently released long-range plan for DOE’s fusion program. 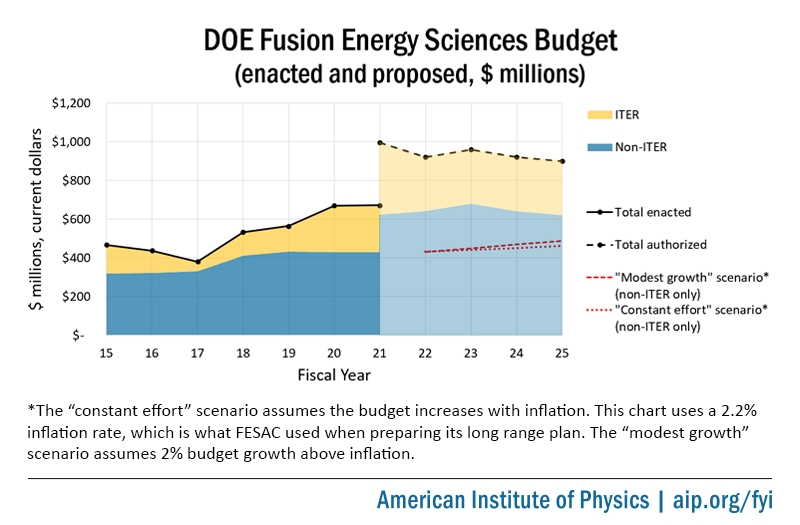 ITER. DOE’s contribution to ITER will remain level at $242 million, of which $60 million is for cash contributions. Congress also directs DOE to submit baseline cost and schedule estimates for the project, which have previously been left open-ended.

Private fusion ventures. Congress specifies level funding of $4 million for the Innovation Network for Fusion Energy (INFUSE) program, which supports collaborations between DOE labs and private fusion energy ventures. The Energy Act also creates a new program for fusion ventures that will reimburse costs once defined milestones are achieved. That program is not funded in this year’s appropriation, but the act recommends Congress allocate $325 million for it distributed over five years.

The BES budget is increasing by 1% to $2.25 billion. All BES research centers and user facilities will receive steady funding, as will the program’s suite of light and neutron source upgrades, the construction of new National Synchrotron Light Source II beamlines, and equipment recapitalization at the five Nanoscale Science Research Centers. The Linac Coherent Light Source II facility at SLAC National Accelerator Lab is receiving $33 million it needs to continue toward completion after its original fully appropriated construction budget was drained by pandemic-related disruptions. Work on a new cryomodule maintenance and repair facility at SLAC National Accelerator Lab will receive $2 million in initial funding. 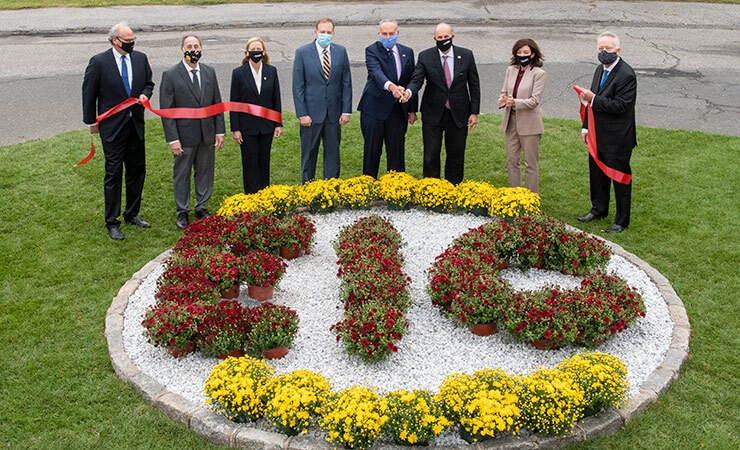 The NP budget is holding steady at $713 million. Funding for early work on the flagship Electron-Ion Collider facility at Brookhaven National Lab is doubling from $11 million to at least $22 million. The project is expected to cost between $1.6 billion and $2.6 billion altogether. Other, smaller-scale projects will receive funding at or above the amounts requested for them.

Isotope program. The House’s proposal to provide $10 million to establish a university research consortium focused on advanced manufacturing techniques for radioisotope production is rejected, and DOE is instead directed to submit a plan for such a program. Separately, Congress provides $1 million to establish a “traineeship program for students to develop the future workforce of radioisotope production.” Via the House report, Congress "acknowledges" DOE’s separation of isotope production activities from the Nuclear Physics program into a dedicated office, as well as its creation of another independent office for accelerator R&D and production, and directs DOE to structure its fiscal year 2022 budget request accordingly.

ASCR is receiving a 4% increase that brings its budget above the $1 billion mark for the first time, nearly double its fiscal year 2015 level. As DOE’s ongoing exascale computing project nears its conclusion, much of its construction budget is shifting to research, with funding increasing from $195 million to at least $250 million The budgets for DOE’s leadership computing facilities and the National Energy Research Scientific Computing Center will stay at least level.

Exascale computing. Overall funding across the Office of Science for DOE’s Exascale Computing Initiative is increasing from $464 million to at least $475 million. The first exascale computer in the U.S. is expected to be installed at Oak Ridge National Lab this year, but another machine at Argonne National Lab, which was scheduled to be completed first, has been delayed due to production problems with the new chip Intel has been developing for it.

The BER budget is increasing $3 million to $753 million. Within that, funding for Biological Systems Science is decreasing from $405 million to no less than $390 million, while Earth and Environmental Systems Sciences funding is increasing from $345 million to at least $350 million. The four Bioenergy Research Centers will receive at least level funding of $100 million overall and the Joint Genome Institute budget will increase at least $3 million to $80 million. Congress continues to direct that the recently reconstituted low-dose radiation research program receive at least $5 million and instructs DOE to work with other agencies to develop a “proper role and direction” for it. The Energy Act recommends that Congress ramp up the program’s budget to $40 million by fiscal year 2024.