The House Science Committee has introduced a bipartisan bill that recommends Congress ramp up funding for the Department of Energy’s Office of Science from $7 billion to nearly $11 billion over the next five years. It also updates policy guidance for the office’s research programs and sets funding targets for its major facility projects. 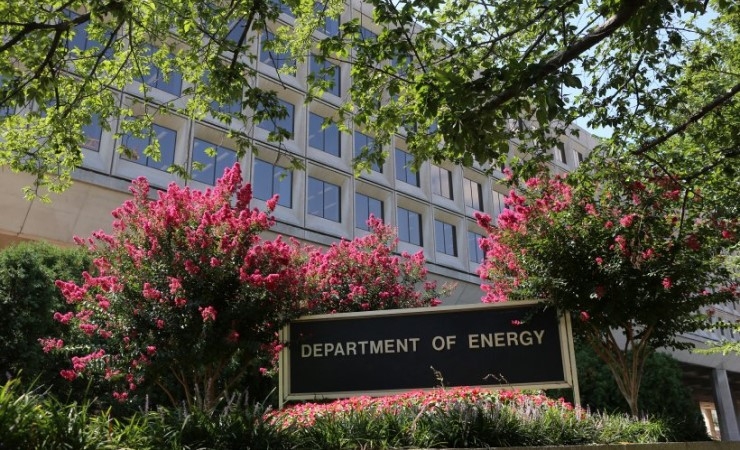 Today, the House Science Committee introduced the DOE Science for the Future Act, a bipartisan policy update for the Department of Energy’s Office of Science that recommends Congress increase its annual budget from its current $7 billion level to nearly $11 billion by fiscal year 2026. The bill also sets funding targets for the office’s six program offices and major facility construction projects, and it establishes several new programs, including a high-intensity laser research initiative and a helium conservation program.

The new bill follows up on the committee’s DOE Research and Innovation Act, which Congress passed in 2018 without including funding recommendations. In a statement, Committee Chair Eddie Bernice Johnson (D-TX) said a comprehensive reauthorization bill for the office is long overdue, arguing it would provide the office with “the direction, stability, and resources that it deserves.”

The bill has been in the works for more than a year and incorporates recommendations from various stakeholders. It is also intended to complement the NSF for the Future Act, the bipartisan policy bill for the National Science Foundation that the committee introduced in March. Although the House has not moved to integrate the bills into a larger science policy package, the NSF and DOE bills are likely to be the basis of future negotiations with the Senate over its Endless Frontier Act, which is currently awaiting a final vote on the Senate floor.

Ahead of introducing the bill, the committee discussed its vision for the Office of Science with Energy Secretary Jennifer Granholm at a hearing on Thursday. In her opening statement, Johnson expressed disappointment that the Biden administration is only requesting to increase the Office of Science’s budget by $400 million to $7.4 billion for fiscal year 2022, even as it seeks much larger increases for R&D elsewhere in the department. By comparison, the DOE Science for the Future Act recommends an $8.7 billion budget for the office in fiscal year 2022.

“Given the major construction activities currently being carried out by the Office of Science to build and upgrade its various world-class facilities, this level of support may well result in a cut to major research accounts, or it could lead to inadequate funding to keep the office's construction activities on schedule and minimize their costs,” Johnson said.

Rather than throwing money at these agencies or pitting them against each other for funding, we’re investing in the programs that work and creating new ones where needed. We’re giving the agencies the resources to sustainably scale up their work. The last thing we need is a massive, one-time injection of money that will dry up when attention turns away from America’s research needs.

Lucas’ remarks implicitly criticized the Endless Frontier Act, which initially focused on expanding technology R&D at the National Science Foundation. As the bill went through committee, some of the funding it recommended for NSF was reallocated to DOE to address the same “key technology areas,” but the bill provides little direction on how the funds should be used.

The DOE Science for the Future Act recommends significant budget increases for each of the Office of Science’s six main programs, proposing that each receive a base 7% annual increase to their existing core activities. On top of this baseline budget growth, it proposes additional funding for construction projects and new programs. These funding profiles are in part designed to alleviate pressure on funding for research grants caused by recent increases in facilities spending. 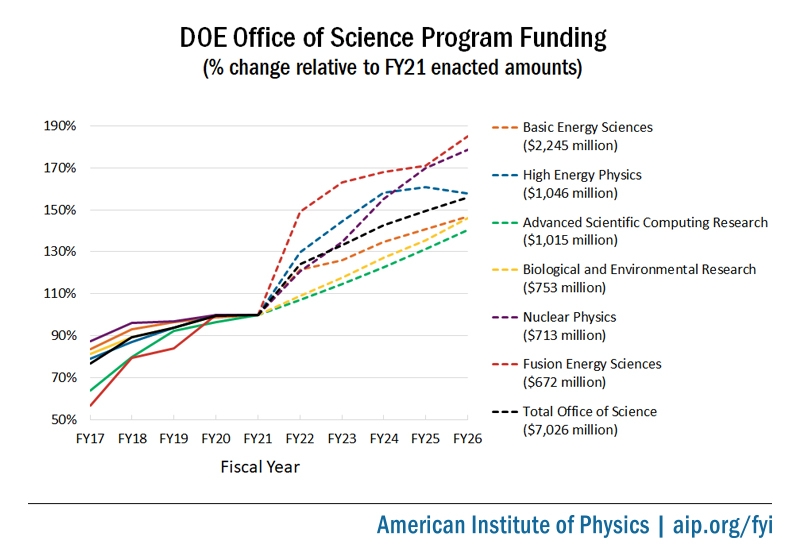 The bill’s funding targets for individual facility projects were developed in consultation with DOE. In some cases, the proposed funding profiles include additional money needed due to project delays stemming from the COVID-19 pandemic. However, the bill does not propose pandemic relief for researchers, which committee leaders have pressed for through separate research recovery legislation.

All major facilities projects currently in the Office of Science’s construction pipeline are supported by the bill, including various light and neutron source user facility upgrades, the flagship LBNF/DUNE neutrino experiment and associated PIP-II accelerator upgrade, and the Electron-Ion Collider that will replace Brookhaven National Lab’s Relativistic Heavy Ion Collider. 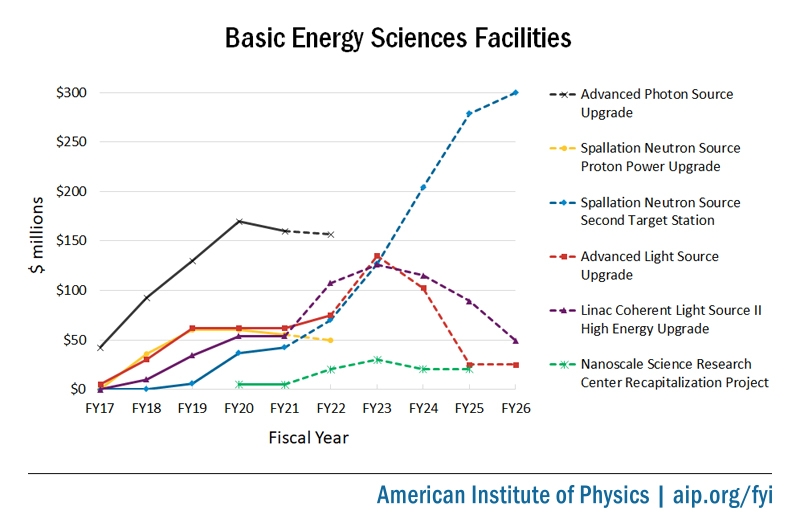 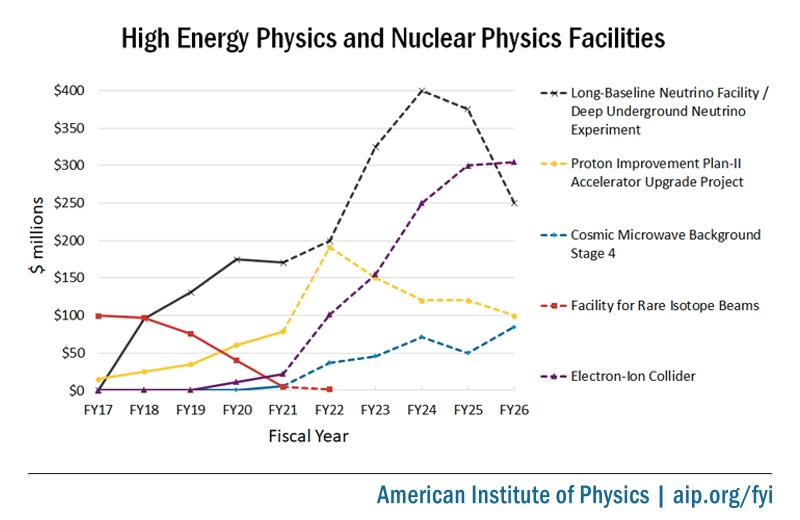 In addition, the bill endorses the Materials in Extreme Conditions end station upgrade at SLAC National Accelerator Lab and the Material Plasma Exposure eXperiment project at Oak Ridge National Lab, which were top priorities identified by the Fusion Energy Sciences Advisory Committee’s recent long-range plan. It also extends the funding recommendations for fusion energy research programs and facilities that were included in the Energy Act of 2020, which also provided policy direction for DOE's applied energy R&D programs outside the Office of Science.

Advanced computing and QIS. The bill would expand DOE’s efforts in quantum information science and high-performance computing. Building on the 2018 National Quantum Initiative Act, the bill incorporates provisions from the Quantum User Expansion for Science and Technology (QUEST) Act, which proposes a program to facilitate researcher access to quantum computing resources, and the Quantum Network Infrastructure Act, which would back DOE’s nascent efforts to build out a “quantum internet.” The bill would also establish R&D programs focused on energy-efficient computing, heterogeneous computing architectures, and beyond-exascale systems, incorporating provisions from the Next Generation Computing Research and Development Act.

High-intensity laser research. The bill directs DOE to establish a laser R&D initiative consistent with the recommendations of the 2017 National Academies report on high-intensity ultrafast lasers. It recommends Congress ramp up annual funding for the initiative to $250 million over five years and stipulates that it should “include research and development of petawatt-scale and of high average power laser technologies necessary for future facility needs in discovery science and to advance energy technologies, as well as support for a user network of academic and national laboratory high intensity laser facilities.” DOE has already begun to implement some of the report’s recommendations, such as by establishing the LaserNetUS network of laser facilities and initiating work on the Materials in Extreme Conditions end station upgrade.

Helium conservation. The bill directs DOE to establish a department-wide program “to reduce the consumption of helium for department grant recipients and facilities and encourage helium recycling and reuse.” The program would provide grants for purchase and repair of helium recycling equipment as well as for R&D on helium alternatives. The American Physical Society has advocated for actions to ensure federally funded researchers retain access to affordable helium in view of recent price fluctuations and constrained supplies.

Diversity and inclusion. The bill would instruct the Office of Science to expand its efforts to broaden the participation of underrepresented groups in the STEM workforce, including by increasing support for NSF’s INCLUDES Network. It also directs the office to develop a ten-year plan for expanding its educational programs for underrepresented students and its outreach efforts to Minority Serving Institutions.