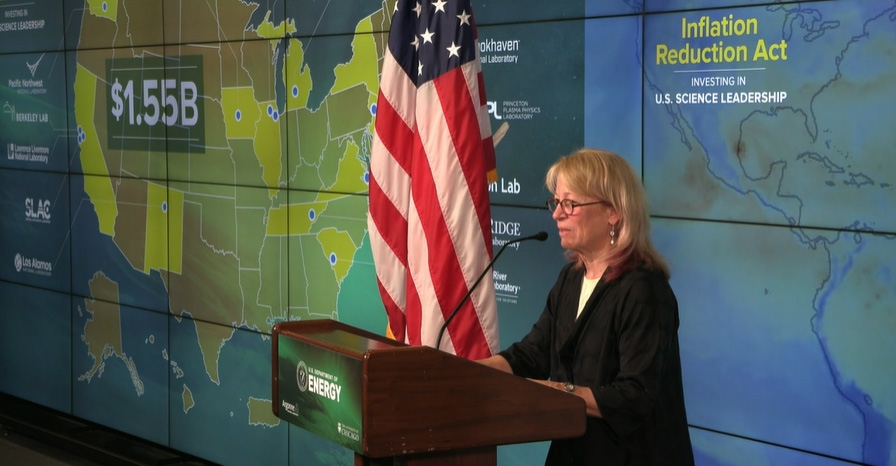 DOE Under Secretary for Science and Innovation Geri Richmond speaking at an Argonne National Lab event at which the department announced its allocation of funding from the Inflation Reduction Act to Office of Science facilities and equipment projects. (Image credit – DOE)

The Department of Energy Office of Science announced last month it had distributed the $1.55 billion it received from the Inflation Reduction Act (IRA) across 52 projects and facilities.

Congress offered broad direction that the money should generally go toward major construction and equipment projects, and it specified amounts for each of the office’s six research programs except Biological and Environmental Research, which does not have a large portfolio of such projects. The legislation further stated the office’s newly reorganized isotope R&D and production program should receive $158 million and that $133 million should go to general infrastructure projects at laboratories the Office of Science oversees.

That direction aside, DOE was free to choose the projects receiving shares of the money and how much. FYI recently spoke with the budget officer for the Office of Science, Kathleen Klausing, to gain further insight into why the funding was allocated as it was and what it is intended to accomplish.

ITER ($256 million). Congress has not consistently appropriated funds to satisfy the cash contributions the U.S. owes as a member of ITER, the international fusion energy R&D facility being built in France. A portion of ITER’s IRA funding will bring those contributions up to date.

“We wanted to catch up on that, because any time we go to any type of meeting with the ITER Organization, that’s the first thing all the other countries bring up,” Klausing said, noting that current exchange rates make it a particularly good time for the U.S. to do so. “I think ITER is one of the big wins in this whole allocation, and it just positions the United States in a good place,” she added.

The IRA is also funding ongoing U.S.-based work on equipment for ITER and early design work on Sub-Project 2, the phase of ITER that will follow its “first plasma” milestone.

In the future, ITER members are apt to face increased obligations to the project after it revises its cost and schedule projections to account for various setbacks, including most recently the discovery of defects that will require disassembling major facility components to fix.

LBNF/DUNE ($125 million). DOE’s flagship neutrino experiment has experienced its own schedule slippage and cost growth, with the total expected cost to the department rising from less than $2 billion to over $3 billion. International partners are planning to contribute about $660 million.

Whereas it was once hoped the project would begin generating neutrinos in 2026, DOE is now aiming for the early 2030s. Klausing explained the IRA funding will allow the project to bring its schedule forward by between three and six months, which will help save on its overall cost. “That’s another great investment,” she said.

Large Hadron Collider upgrades ($106 million). A year ago, looming shortfalls in U.S. contributions threatened to hinder upgrades to the LHC and its detectors at Europe’s CERN laboratory. Klausing said IRA funding will now permit the U.S. to complete its contributions to the accelerator upgrade while bringing the detector projects closer to the end of their funding profiles. She explained the total cost of the detector projects is still in flux due to supply-chain delays and that DOE opted not to try to fully fund them using IRA money so that it can continue to request appropriations to meet any remaining needs.

Electron-Ion Collider ($138 million). Construction work on EIC is scheduled to begin in 2025 after Brookhaven National Lab closes the facility it will be built around, the Relativistic Heavy Ion Collider. However, low funding levels for EIC have threatened to force Brookhaven to lay off RHIC personnel whose expertise is needed for work on the new facility.

The IRA funding for EIC will be split between Brookhaven and project partner Jefferson Lab. Klausing said it will relieve the immediate pressure on the project without ramping funding up so fast that ordinary appropriations cannot pick up where the IRA leaves off. She related that in general DOE is trying to avoid accelerating appropriations for projects that are early on in their funding profiles before it has provided funding needed for projects that are farther along.

Advanced Light Source upgrade ($97 million). Klausing also said a top DOE priority is completing upgrades to its light source user facilities. One such project, just now moving into its main construction phase, will increase the brightness of the ALS facility at Berkeley Lab. Combined with the project’s requested fiscal year 2023 appropriation, its IRA allocation will bring it close to the end of its funding profile. Klausing explained DOE was specifically looking for opportunities to use IRA money to get projects “off the table” within the next year or two. 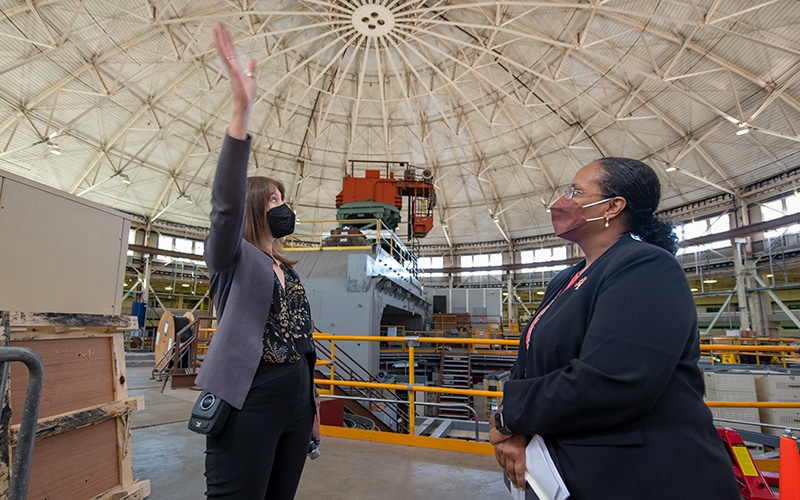 Linac Coherent Light Source II upgrade ($96 million). Another light source, SLAC’s new LCLS-II X-ray free electron laser facility, is receiving a similarly large share of IRA funding for a planned energy upgrade. Components of the facility are starting to come online and SLAC expects it will achieve “first light” next year. While the upgrade is a follow-on project that is still ramping up, Klausing said its IRA allocation represents part of DOE’s general prioritization of light source projects.

SNS Second Target Station ($43 million). With a projected total cost of over $2 billion, construction of a second target station at Oak Ridge National Lab’s Spallation Neutron Source is the largest user facility project in the Office of Science portfolio awaiting a ramp up in support. Klausing said that its allocation reflects a decision to avoid ramping it up too quickly while appropriations requests are still focused on light source projects.

High-performance computing ($164 million). DOE split the IRA funding that Congress allocated to the Advanced Scientific Computing Research program almost evenly between the Argonne Leadership Computing Facility, Oak Ridge Leadership Computing Facility, and the National Energy Research Scientific Computing Center at Berkeley Lab. Noting that DOE leases high-performance computers from the companies that build them, Klausing said the department is using IRA funds to get ahead on its payments, which will help it turn toward funding a new generation of machines.

Mu2e ($35 million). Fermilab’s muon-to-electron conversion experiment is a project that had completed its funding profile only to be hit by pandemic-related disruptions and delays in the delivery of critical components. Klausing said the project’s IRA allocation will allow it to close the resulting funding gap.

CMB-S4 ($13 million). The Cosmic Microwave Background Stage 4 project is expected to be funded as a partnership between DOE and the National Science Foundation. So far, DOE has provided modest funding while NSF has yet to start funding the project through its major facilities account. This year, DOE throttled back its request for the project to only $1 million and Klausing said the IRA allocation would serve as a “short-term fix” to make sure early work on the project keeps moving.

MEC upgrade ($10 million). The budget request for a power upgrade to the Matter in Extreme Conditions laser at SLAC was similarly throttled back to $1 million this year. Klausing explained that the project has not yet settled on a design and that DOE aimed to give it sufficient IRA funding so that it can decide on a project scope and then proceed through the ordinary appropriations process.

Ton-scale neutrinoless double beta decay ($8 million). DOE has identified three candidate projects that would search for evidence of a hypothesized particle decay process not explained by the Standard Model of particle physics. The IRA is providing small amounts of funding to all three for design activities while DOE works out its strategy for them. Klausing said, “We didn’t want to put too much money there that sits while it’s decided what design is moving forward, which piece the U.S. is doing, which piece the international community is going to do.”

Isotope projects ($158 million). The IRA allocation Congress provided for DOE’s isotope R&D and production program is almost twice the program’s fiscal year 2022 budget, an infusion that was likely motivated in part by heightened concerns about Russia’s major role in producing both critical isotopes and materials needed for their production.

DOE distributed the money among eight projects, with about half going to the Stable Isotope Production and Research Center, a long-term construction project at Oak Ridge National Lab. Klausing explained that while DOE regards that project as important, it also wanted to fund activities with shorter time horizons. “We put money towards operations and equipment, to get more electromagnetic isotope separators across the country and hot cells across the country, so we can start producing isotopes that we are in short supply of,” she said.