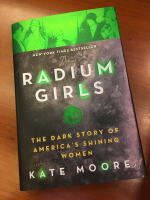 One of the best perks of being a librarian is getting a little alone time with all the books when you’re cataloging new acquisitions. My personal background is in history so I’m particularly attracted to the history books we buy. I also happen to be fascinated by women’s progressive era labor and gross medical history, so our first ever official staff book recommendation is one that combines all of my personal and professional interests: The Radium Girls: The Dark Story of America’s Shining Women by Kate Moore.

I have to admit, I’ve known a bit about the “radium girls” for a while. I first heard about them on an NPR program of some kind, but I became particularly interested in them after reading The Poisoner’s Handbook: Murder and the Birth of Forensic Medicine in Jazz Age New York by Deborah Blum (another great book, but sadly, the radium chapter doesn’t really overlap with our Library’s collection development policy). 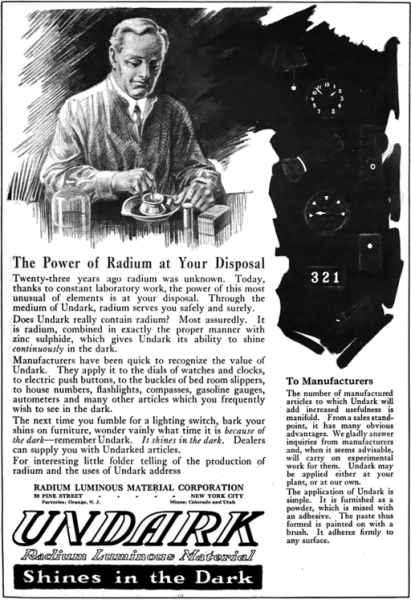 After the discovery of radium in 1898, the world had a bit of a radium obsession. It was used as a toothpaste, health tonic (think patent medicine, not cutting edge science) and skin cream; I mean, who doesn’t want their skin to glow? There were lots of ways people marketed and sold their piece of this new discovery but people were especially excited about its ability to glow in the dark. During WWI there was a great need for watch dials that could be seen at night, since soldiers can’t all coordinate to go “over the top” at 5am if they can’t see their watch in the dark. Radium paint was invented in 1908 by Dr. Sabin Arnold von Sochocky, who later went on to co-found the United States Radium Corporation, both a producer of this new paint, sold as “Undark”, and the watch dials that were painted with it. Radium Girls is the story of the women who worked at this factory in New Jersey, and a similar one called Radium Dial Company in Illinois.

In 1917, painting watch dials was meticulous work, and the brushes required to paint the small numbers were extremely fine. In order to speed up their work, dial painters were encouraged to use the technique of “lip pointing” to create an even finer tip. The workers regularly put the tip of the brush in their mouth many times per day. Since dial painters were paid per dial, the faster the painting, the more lip pointing occurred, and the more radium was ingested by the dial painters. We now know that when ingested in the body, radium is treated as calcium and deposited in the bones, left basically forever (certainly longer than a human lifespan) to do its damage. But at the time, the workers were not told of the danger. While the chemists in the lab used lead lined aprons and gloves, the dial painters were lip pointing daily, ingesting microscopic amounts of radium every time. 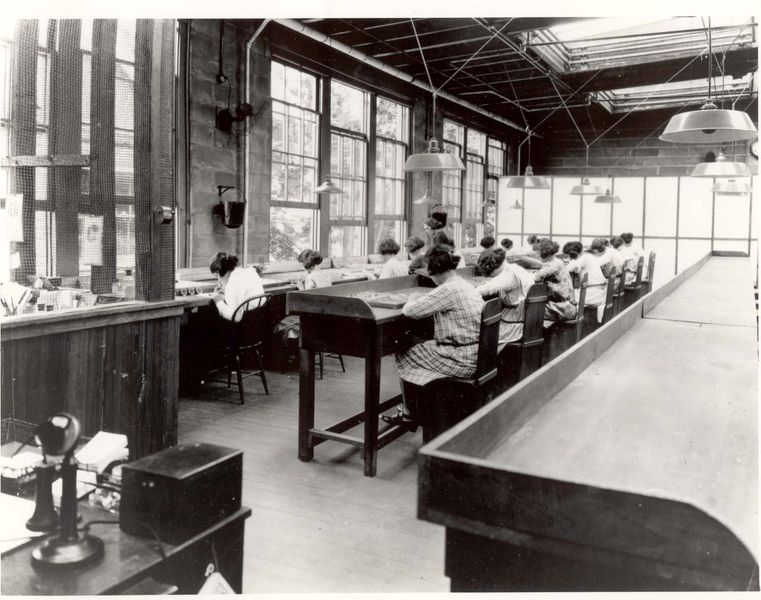 Radium is a patient poison though, and most of the women had left the factory years before they started getting sick. It wasn’t until 1921 that one of the first dial painters started exhibiting symptoms. Kate Moore writes in detail how more and more women got sick and died mysteriously. It took years for doctors to figure out the cause. Some of them were originally diagnosed with syphilis or just a mysterious list of symptoms: anemia, tooth decay, bone cancer, etc. With the help of their families, social workers, medical professionals, scientists, lawyers, and years of work, some of the dial painters were able to get a semblance of justice. But what justice they achieved was often too little too late, but what almost immediately the dial painters got publicity and the sympathy of the world.

The bulk of Radium Girls is very grim; the companies that sickened and killed these women were never really held to account, and we still struggle with workplace safety today. However, amongst all the death and disappointment, there was a silver lining. New safety standards were introduced as a result of the dial painters’ plight. Having seen the damage a tiny amount of radiation can do to a human body, new safety measures were used to great success in the Manhattan Project, to protect people working with radiation. Even after the end of World War II, the dial painters’ legacies continued. While many women died as a result of the radium they’d ingested, some lived on for years and even decades. Their bones contained a gold-mine for scientists studying radiation safety. Many of the workers volunteered to be studied by the Center for Human Radiobiology, part of the Argonne National Laboratory. Some of the deceased dial workers and their families allowed their bodies to be studied as well. It was partly because of this research that the Nuclear Test Ban Treaty was signed in 1963. Research continued as long as there were dial painters to study, which is why we now know so much about what radium and radiation can do to a human body.

So why am I recommending this book? Obviously, this fits into a pretty niche set of interests for me, but I think it’s a great book for everyone to pick up. I think it’s important that we understand how science, and physics in particular, impacts actual humans. Radium was a “great” discovery for science, but on the individual level it did a lot of damage. I also think it’s important to remember that the women in this story weren’t merely victims; they worked tirelessly until their voices were heard and they fought for justice until their last breath. Even after every possible legal and medical avenue was exhausted, they lent their lives to science. Because of these women, future generations now understand the dangers of radiation and (hopefully) will never let this happen again. In my opinion, the radium girls are as important to the history of radiation as the Curies and other great scientists.

If you’re interested in learning more about the Radium Girls, I also recommend, Radium Girls: Women and Industrial Health Reform, 1910-1935 by Claudia Clark and Strange Glow: The Story of Radiation by Timothy Jorgensen.

A blog about the history of physics collections of the Niels Bohr Library & Archives.

Stories from Black Physicists in Our Collections