It is part of my job to care for our audiovisual materials in the archives. This includes a wide array of materials used to capture sound and moving images from the last 75-or-so years, such as shellac and vinyl LP’s (long-playing records), audio tape reels and cassettes, video tape reels and cassettes (including VHS, U-Matic, and Beta tapes), and moving image films.

One of the oldest audiovisual material-types found in our archives is 16mm acetate film. Acetate film was developed in the 1940’s and widely adopted in the 1950’s. Prior to this, cellulose nitrate film was the standard. Nitrate film is highly combustible and can be quite dangerous to use and store, especially as it ages. There are quite a few examples of disastrous fires caused by nitrate film.

Remember in the 2009 film, Inglorious Bastards, when the projectionist flicks his cigarette into the unspooled pile of film? It immediately ignites and grows into a massive fire which burns down the Nazi-filled theater. Given the time period, that definitely would have been cellulose nitrate film stock. Tarantino dramatics aside, there was at least some accuracy to this scene. Fire produced by nitrate films rapidly spreads and can keep burning without oxygen- even under water!

You couldn’t pay me to do what the gentlemen in this video did, but check out these nitrate fire demonstrations (we already went over how quickly the fires can spread and the smoke can be extremely harmful to breathe in so please don’t try this at home). You can see a strip of nitrate film stock burning next to “safety” film- a comparatively true nickname for acetate stock.

Many film archives strategically work to safely preserve their nitrate films, but since the majority of our collections come from the latter half of the 20th century, this is not a situation we have to worry about in our archives. One day, I would be honored to join other film archivists in their efforts to save early 20th century film, but for now I think it best that I stick to acetate.

I may not have to worry about massive, uncontrollable fires randomly starting in the archives, but the acetate films in my care come along with their own set of preservation concerns. As it ages, acetate films experience chemical deterioration and decay. This hydrolysis reaction is commonly called “vinegar syndrome,” and is aptly named for the sharp vinegar-like smell the film omits during the process. I should note that it is not recommended that you breathe in the gases the acetate puts off; in large quantities, they can make you lightheaded and continued exposure could make you sick. So please don’t go sticking your nose in your old film cans to test them! 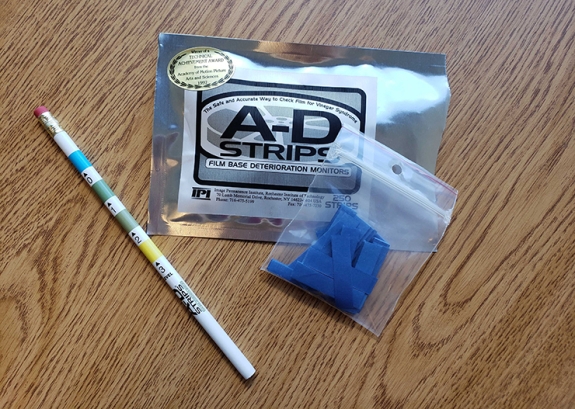 “But how can you tell when the film is starting the decay process and do something about it before it gets to this stage?”, you may ask. “Is there nothing that can be done?” Fear not, concerned citizens. There is actually a very easy-to-perform test which indicates the acidity- and therefore the stage of decay- of the acetate.

A-D (Acid Detecting) strips are small, treated strips of paper that change color when exposed to the chemicals put off by deteriorating film. The strips come with a very handy pencil with a color and number scale printed on it (don’t ask me why it’s on a pencil, I really don’t know) which help the archivist determine the severity of decay after the strips have been left in contact with the film.

16mm film stored on plastic cores with A-D strips showing a variety of results (blue being the least deteriorated and yellow being the most). The second and third films need immediate care while the first is still relatively safe, but is nearing a point of increased decay. Fortunately, these films exist in other formats, including digital files.

Once you have the result of your A-D strip test, you can determine the level to which a reel of film has already decayed. There is no real way to reverse the damage caused by vinegar syndrome, but placing the items in cold storage will at least halt the process.

It is very important to carry out A-D strip testing and consider cold storage early on, since the decay process has been shown to rapidly increase as the film puts off gas. In other words, it is best to place film in cold storage before the A-D strips turn green or yellow. The graph below- a screenshot from a fantastic webinar given by Karen Gracy - breaks it down. 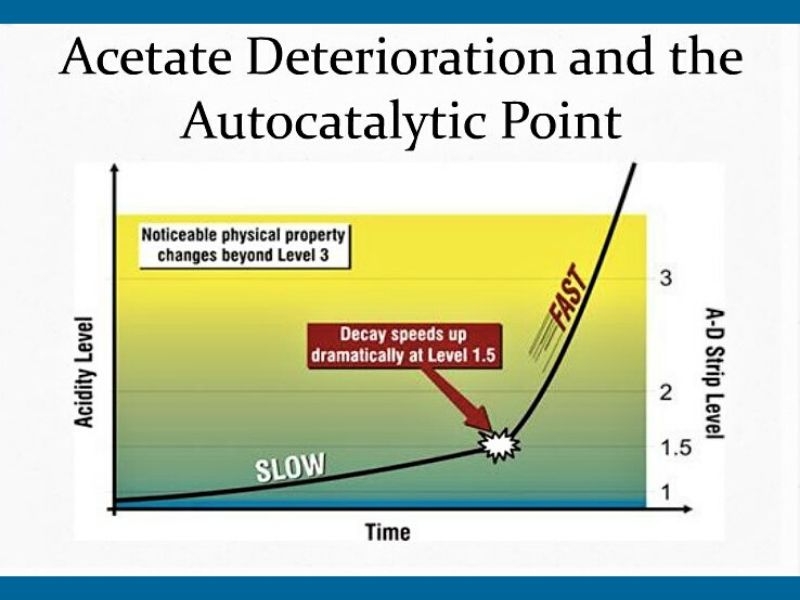 In the case of acetate film, freezing conditions are best for storage. That being said, consistency is also key here - if you cannot keep an area or cold-storage unit at 5 degrees on a regular basis, for example, it is better to go with a slightly higher temperature that you can consistently achieve. In the archives, we use a standard frost-free freezer to store our decaying film reels. Even though the freezer is not supposed to accumulate frost build-up, condensation could still potentially damage the film, so we tightly wrap them in static-free wraps and thick plastic bags. Once the reels are stored in the freezer, it is best to avoid removing and thawing them unless it is absolutely necessary.

The importance of digitization

Of course, alongside preservation of materials, our goal in the archives is also to provide access to collections, so this is when it becomes very useful to have an access copy available.

Today, the most practical way to provide access to our film collections is through digitization. Having a digital copy made allows us to limit the amount of handling the original film receives. Plus, we are able to share these files with researchers remotely; users no longer need to visit the archives to view the films (this is especially beneficial in 2020).

Below is a small clip taken from a recently digitized film. It comes from a larger collection of home movies created by physicist William F. Meggers.

Would you like to see more of the Meggers film collection? Let me know in the comments and I will make it happen!

It seems as though I learn something new each day I work with film. In addition to hands-on experience, I am grateful for professional organizations and the community of experts who work to share knowledge regarding film conservation with newcomers like myself.

If you’re like me and you want to learn more about film history and preservation, check out this mini documentary, Lost Forever: The Art of Film Preservation. It is well-worth the 30 minutes, as it goes into great detail regarding lost nitrate films, film restoration, and digital preservation.

Here are some additional resources which I find interesting, including Karen Gracy’s webinar that I mentioned above :

Please note that unless specified, all images in this post were taken by yours truly.

A few years ago, I thought that all studios should join in a compact that profits from their successful movies should have a percentage allocated for the restoration of old films. i.e., choose some films from a list and profits from the movie would be used to restore those films. That way, it wouldn't require "charity" to step forward and restore, say, a 1923 or 1930 movie that otherwise would not be attended to. The more profitable the new movie is, the more restorations are done. The closing credits of the new movie might even indicate that part of the revenues are being devoted to restoration and list the ones pre-committed to.