A longer chat with the NBLA librarians 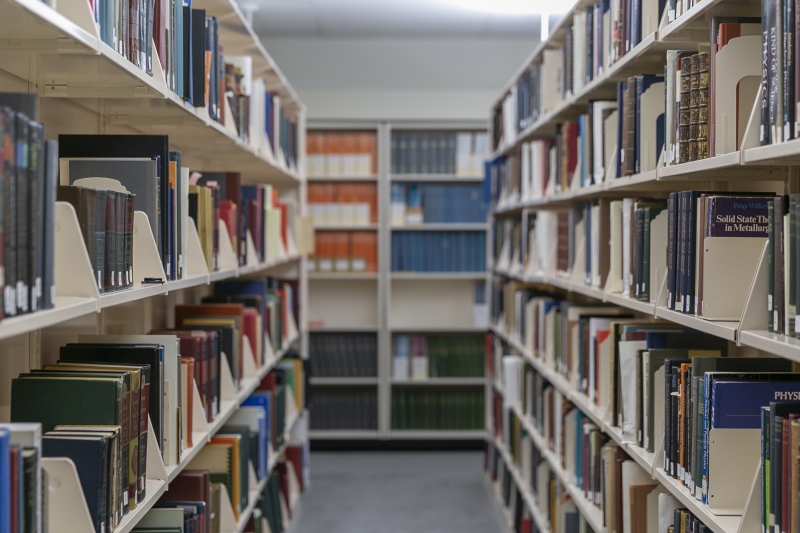 Some of our librarians had even more to say after our staff Q&A earlier this month.

Q: What surprises have you encountered while cataloging?

Corinne: I was totally surprised when I opened the box containing 30 Offprints by Chandrasekhar.  Even though the title says there are 30 offprints, it was still something to behold each of the different sizes and styles of offprints/journals contained in the sammelband.  His signature in the front was also an unexpected thrill. 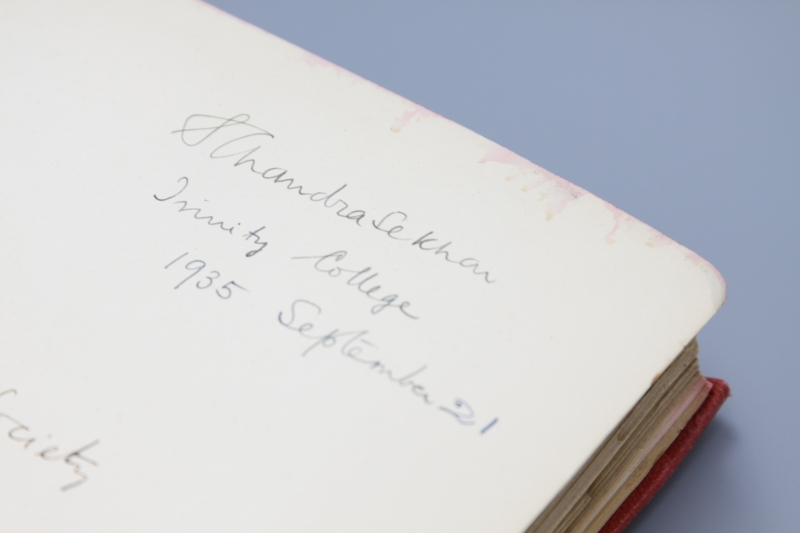 Subrahmanyan Chandrasekhar's signature in a sammelband of offprints

Sarah: So glad you asked. 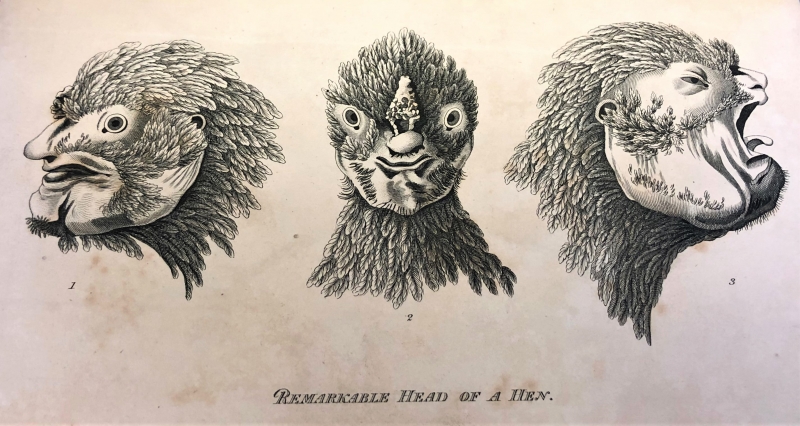 Annals of Philosophy, or Magazine of Chemistry, Mineralogy, Mechanics, Natural History, Agriculture and the Arts, 1816, vol. 8

The beauty of many 19th-century scientific journals is that they are eclectic, and the Annals of Philosophy is no exception. The journal’s subtitle perhaps the best describes its varied contents: a Magazine of Chemistry, Mineralogy, Mechanics, Natural History, Agriculture and the Arts. Though the Annals has such a broad scope, it was still a surprise to open volume eight and find an image of, “a hen having the profile of a human face.” I initially found the illustration to be delightfully absurd. The accompanying article by Professor Fischer was a rather interesting and educational read. Fischer detailed the hen’s physical characteristics and behaviors stating that she, like myself, “has been seen to eat cheese with much eagerness.”  Fischer ultimately concluded that the hen was not, as many believed, a divine creation, but rather an “irregularity of nature.” This illustration was found in the Wenner Collection. The Collection’s focus is on the history of physics, yet its magnitude allows for broad exploration.

Allison: These hand drawn illustrations in Cours D’Astronomie, a hand-written book of Charles-Eugene Delaunay’s lectures at the Sorbonne, by his student Jean-Baptiste Biot. 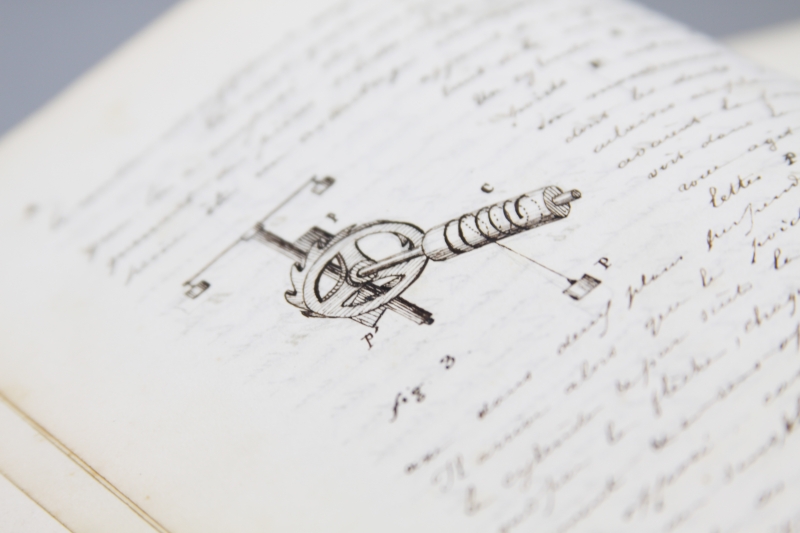 Cours D’Astronomie, a hand-written book ofCharles-Eugene Delaunay’s lectures at the Sorbonne, by his student Jean-Baptiste Biot. 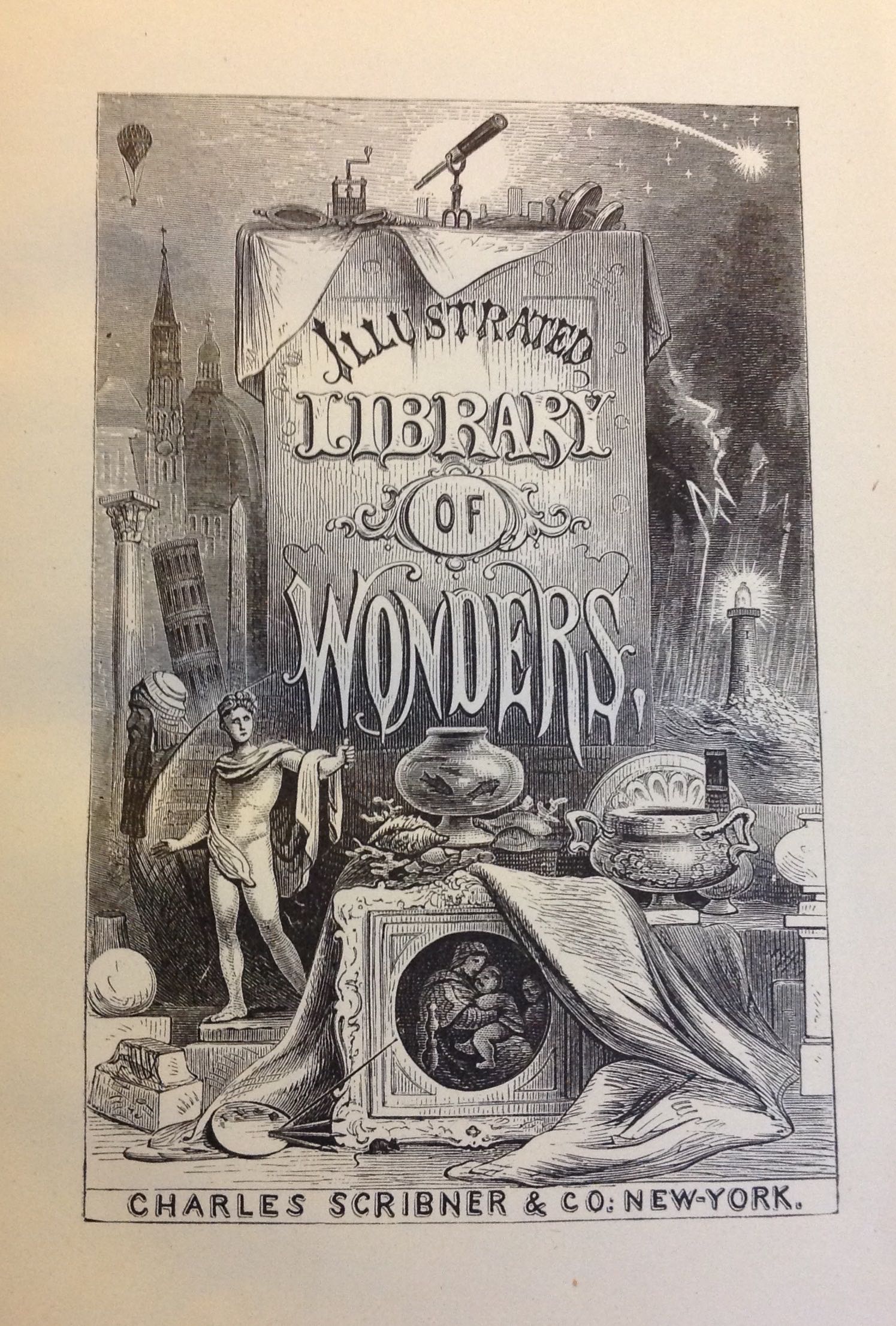 Caitlin: This “Library of Wonders” illustration in Wonders of Electricity by Jean Baptiste Baille. I like the spooky vibes. It would be perfect to post in October. Libraries are certainly full of “wonders”! You never know what hidden gem you might find inside a book! The Library of Wonders series seems to be works of French science (or other academic subjects) translated into English. Other subjects in this series considered "wonderful": engraving, optics, sculpture, glass-making, Italian art, the human body, water, architecture, European art, acoustics, vegetation, the heavens, arms and armour in antiquity and the middle ages, bodily strength and skill, Pompeii, and the moon. You can find many of these freely and completely digitized at Hathi Trust.

Q: What’s your favorite book title in the collection?

Allison: New Experiments and Observations Touching Cold, Or, An Experimental History of Cold, Begun: To which are Added an Examen of Antiperistasis, and an Examen of Mr. Hobs's Doctrine about Cold : Whereunto is Annexed An Account of Freezing, Brought in to the Royal Society, by the Learned Dr. C. Merret, a Fellow of it  by Robert Boyle, 1665

Corinne: A Philosophical Inquiry into the Cause of Animal Heat : with Incidental Observations on Several Phisiological and Chymical Questions, Connected with the Subject by Dugood Leslie, 1778

Q: What’s your favorite note in a book?

Corinne: I found this “ex libris” stamp inside the front cover of The Spectroscopy of X-Rays by Manne Siegbahn (1925).  I wonder if Dr. Paugh ever willingly lent his books to anyone.  If so, I would be sure to return them in a hurry!

Sarah: An unidentified marking found on a dedication page which, thanks to Corinne, I now lovingly refer to as a “Gandalf mark.” Can you help us identify it? 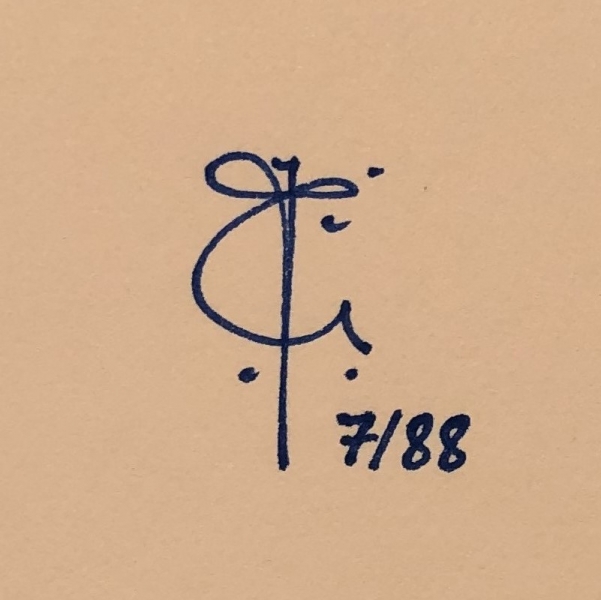 The Many Worlds Interpretation of Quantum Mechanics edited by Bryce S. DeWitt and Neill Graham, 1973 WE-20182384

Q: What is your favorite MARC field?

Sarah: 583: Action Note. This field is used to record information about processing, reference, and preservation actions. I like to use this field to see how many 4-flap enclosures we've created over the year.

Allison: 541: Immediate Source of Acquisition Note. It’s where we record information about donors and it’s searchable in our catalog by keyword so we can see who donated the book. This is essential for tracking and record-keeping purposes, but it's also helpful for researchers who may be interested in provenance and the book collections of prominent physicists. Though 561 is also used for Ownership and Custodial History .

Corinne: 500: General Note. This is a nice catch-all for anything interesting about the item. I appreciate that it’s a field we can repeat within a record and use multiple times for different purposes. A particularly fun way we use it is for identifying books that use our sources, typically a photo from the Emilio Segrè Visual Archives or something else from our general archival collections. The particular note we use for this is “Used NBLA sources”, which is a term that is also keyword searchable in the catalog.

Q: Do you wear gloves when handling the books?

Caitlin: Red rot would be the exception to the no-gloves rule. Red rot is reddish-brown, powdery, dusty stuff that forms on leather book covers as the leather deteriorates. Even if only a small section of the book cover is leather, it can create a huge mess as it deteriorates. Red rot transfers easily to nearby books, and it gets ALL OVER human hands! That is a lesson I learned the hard way when I discovered five thick oversized volumes on the shelf that displayed high levels of deterioration. By the time I finished my task, red rot dust had coated my hands. When I mentioned it to my coworker, she said something to the effect of: “Oh yeah. Red rot won’t kill you. But in cases like these, wearing gloves is probably a good idea.”

Q: What’s your favorite item in the Library collection?

Corinne: I love the tininess of this Journal des sçavans, which contains an article by physicist Ole Rœmer about the speed of light.

Allison: My favorite modern book is The Radium Girls by Kate Moore, which I will happily talk about all day. My favorite rare book is The Cursus Mathematicus by William Leybourn. It’s one of the first rare books I encountered when I had just started working at the Niels Bohr Library & Archives. It's so beautiful and impressive looking and I always love to show it off on tours. I find it fascinating that there’s a chapter on sun-dials, which was once a very exciting technology in the 17th century. It makes me wonder how many of our new technologies will stand the test of time. What's interesting is that books, something so prosiac we barely think about it now, were also once an exciting new technology, and unlike sundials they are still very much essential to human life. You can read a little more about The Cursus Mathematicus here. 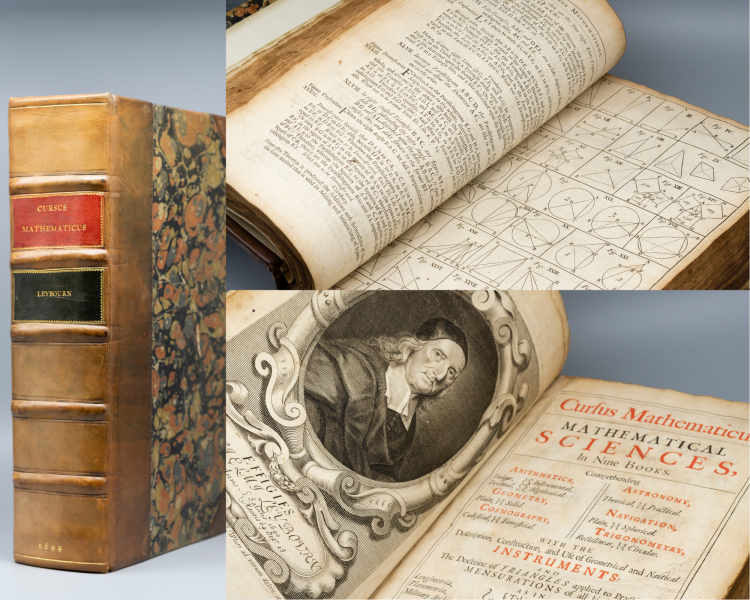 Caitlin: So far, my favorite book is Science for All, edited by Robert Brown. It covers a wide range of topics and contains many fascinating illustrations, of which my favorite is one depicting the formation of beehives, but there are many illustrations related to physics and astronomy. 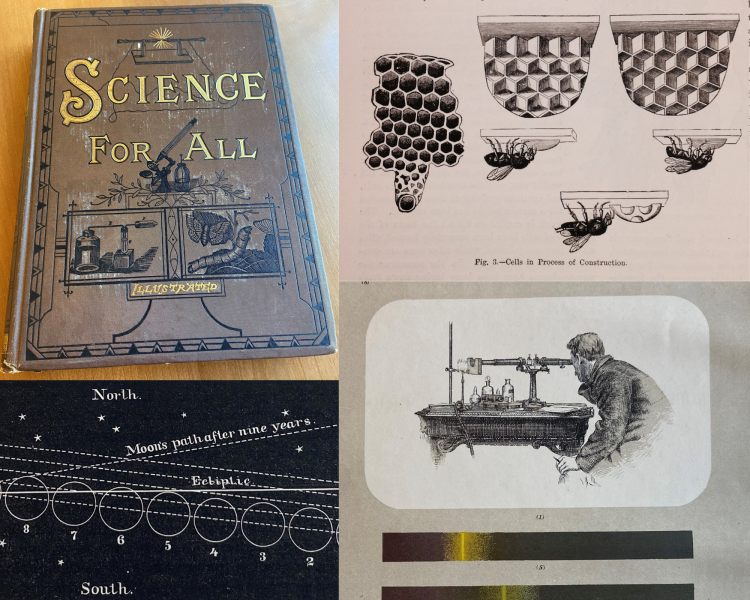 Illustrations from Science for All. Formation of beehives (upper right), eclipse of the moon (lower left), and spectrosope (lower right).

Q: Do you have a favorite binding style?

Allison: I have a real fondness for vellum bindings, especially limp vellum. They’re simple but striking, and like nothing we ever see in the 21st century.

Q: What do you listen to when you are cataloging/inventorying?

Corinne: Depending on my mood and the level of difficulty of the cataloging/inventorying, I might be listening to a classical music radio station online (my go-to), fast-paced electronica, oldies, or podcasts.  It has to be pretty easy going for me to listen to podcasts, but when I can, my favorites at the moment are Pop Culture Happy Hour from NPR (recommended by Audrey and Allison!) and Answer Me This with Helen and Olly.

Sarah: I usually end up pausing anything about 15 seconds in.

Allison: Something energetic, but soothing. I’ve really been digging The Highwomen lately.

Q: Have you ever bound a book or tried your hand at using a printing press or handwriting a manuscript?

Sarah: As an undergrad, I took a museum studies course where I learned to operate a 17th century printing press. We washed our hands after handling the type, but I still think my lead levels are higher than average.

Allison: Yes, I used to work in conservation and I learned some bookbinding. I was not very good, but I did get to make some pretty cool books. My pride and joy is the one and only leather-spined (called quarter bound) book I made.

Q: Have you discovered any mistakes, offsets, or misprints?

Allison: I found a misbound book!

Corinne: Page 952 is accidentally printed as page 452 in this 1669 fourth volume of Philosophical Transactions of the Royal Society of London (fondly referred to as Phil Trans.)