The Trump administration is once again proposing to eliminate the Advanced Research Projects Agency–Energy and slash the budgets of many of the Department of Energy’s applied R&D programs. Within reduced toplines, the department would prioritize crosscutting initiatives as well as facilities projects such as the multibillion dollar Versatile Test Reactor.

In its fiscal year 2021 budget request, the Trump administration is once again targeting the Department of Energy’s applied R&D programs for steep budget cuts and seeking to terminate the Advanced Research Projects Agency–Energy. In line with the administration’s prior proposals, renewable energy and energy efficiency programs would be scaled back dramatically, while the budgets of smaller programs focused on the integrity and security of the U.S energy system would receive boosts.

As with its request for the DOE Office of Science, the administration plans to increase the department's focus on crosscutting efforts such as the Energy Storage Grand Challenge, which launched in January, and a new initiative focused on critical minerals. It also seeks to ramp up work on the multibillion dollar Versatile Test Reactor user facility and discontinue the advanced nuclear reactor demonstration program that Congress just established.

To date, Congress has generally ignored the administration’s plans for the applied energy R&D programs and instead increased their funding across the board. This year, there are also policy bills pending in the House and Senate that would recommend funding the programs near or above their current levels in the years ahead.

Summary figures from the request and previous appropriations are available in FYI’s Federal Science Budget Tracker. 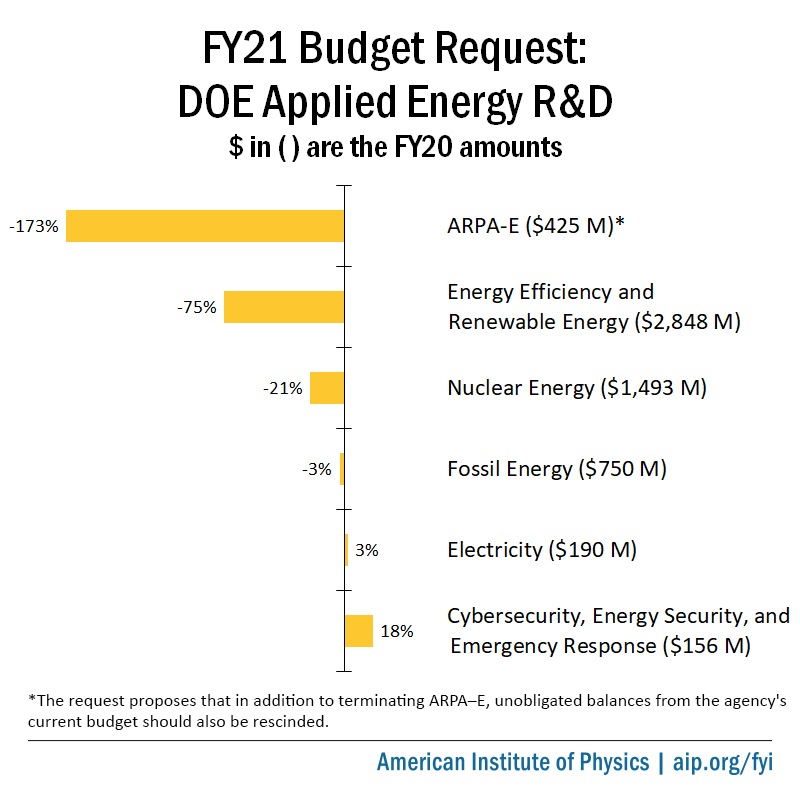 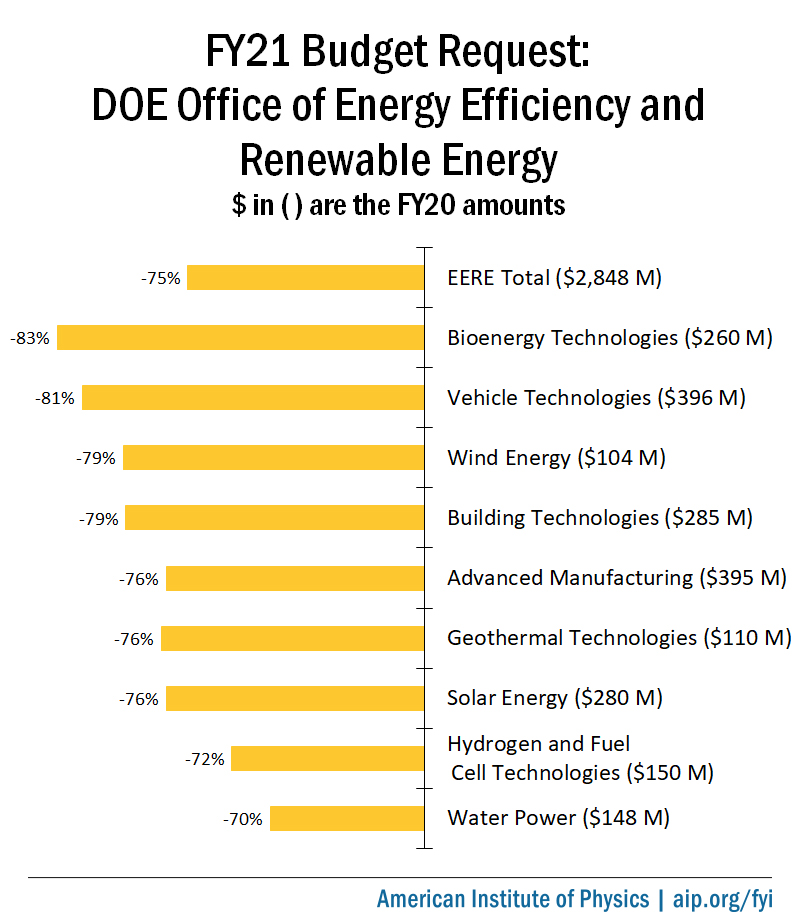 Beyond proposing to terminate ARPA–E, the Trump administration is asking Congress to rescind $332 million in unobligated balances from the agency’s current budget. However, Congress has taken a strong interest in ARPA–E since the administration first proposed terminating it in 2017 and is currently funding it at a record-high level of $425 million. Moreover, bipartisan bills currently pending in the House and Senate would recommend its budget ramp up to $750 million by fiscal year 2024. A bill recently introduced by Republicans on the House Science Committee would recommend increasing its funding to $1 billion by fiscal year 2029.

DOE’s Energy Storage Grand Challenge builds on prior departmental efforts such as the Beyond Batteries initiative and its successor, the Advanced Energy Storage Initiative. It aims to bolster U.S. global leadership in energy storage through R&D funding, prizes, and partnerships, among other mechanisms, and to take a “holistic” approach toward relevant programs scattered across the department. It has also set the specific goal of making the U.S. energy storage industry independent of foreign sources of critical materials by 2030.

The request proposes $214 million for all grand challenge activities across the department, which is substantially less than their current combined level of $367 million. The Office of Energy Efficiency and Renewable Energy (EERE) would see its contribution drop from $283 million to $97 million.

Grid-scale storage. The request proposes to reduce funding for grid-scale energy storage research within the Office of Electricity from $55 million to about $44 million. However, it also proposes $40 million for the construction of a new Grid Storage Launchpad facility at Pacific Northwest National Lab that would modernize and expand research capabilities for the development, testing, and independent validation of battery materials and systems. DOE anticipates the facility will be completed by 2026 and cost between $57 million and $77 million in total.

EERE contributions. EERE’s Vehicle Technologies program would contribute $35 million for grand challenge work focused on improving the cost, range, and charge time of electric vehicle batteries. However, the program’s Battery and Electrification Technologies subprogram would see its budget slashed from $175 million to $49 million under the request. The remainder of EERE’s contribution would be drawn from six other programs with similarly reduced toplines.

Other offices. The request also proposes small grand challenge contributions from the Offices of Nuclear Energy and Fossil Energy. The Office of Science plans to continue funding the Joint Center for Energy Storage Research, an Energy Innovation Hub based at Argonne National Lab, at about $24 million.

Congressional interest. Congress has recently advanced several policy bills focused on energy storage. The Senate’s bipartisan American Energy Innovation Act would create an integrated “Energy Storage System Research, Development, and Deployment Program” within DOE and require the department to support at least five energy storage technology demonstration projects by fiscal year 2024 as well as award grants to aid the deployment of pilot systems. Although the legislation is currently stalled on the Senate floor, congressional appropriators could implement some provisions through spending legislation, as they already have for the advanced reactor demonstration program.

DOE states it is establishing a new department-wide initiative focused on meeting “aggressive, yet achievable goals … to diversify supply of, develop substitutes for, and drive recycling, reuse, and more efficient use of critical minerals.” It is requesting $131 million in total for activities related to the initiative, a decrease from the $147 million allocated to them within DOE’s current budget.

Critical minerals such as rare earth elements are important for fabricating many technologies, including energy technologies, but they can be difficult to mine and are generally obtained from sources outside the U.S. The new initiative responds to an executive order President Trump issued in 2017 calling for a national strategy to reduce the vulnerability of U.S. critical mineral supply chains to disruptions.

Critical Materials Institute. The request states that DOE plans to dissolve its Critical Materials Institute, an Energy Innovation Hub located at Ames Laboratory in Iowa, and replace it with a broader national laboratory-led consortium modeled on the existing Grid Modernization Laboratory Consortium. DOE established the institute in 2013 and it is currently funded at $25 million annually through EERE’s Advanced Manufacturing program. The request states DOE “favors a transition away from the hub funding model because the mortgaging of future appropriations reduces budgetary flexibility.” Congress has rejected previous proposals to defund the Critical Materials Institute as well as the Advanced Manufacturing program’s recently awarded Energy-Water Desalination Hub, which is also back on the chopping block this year. 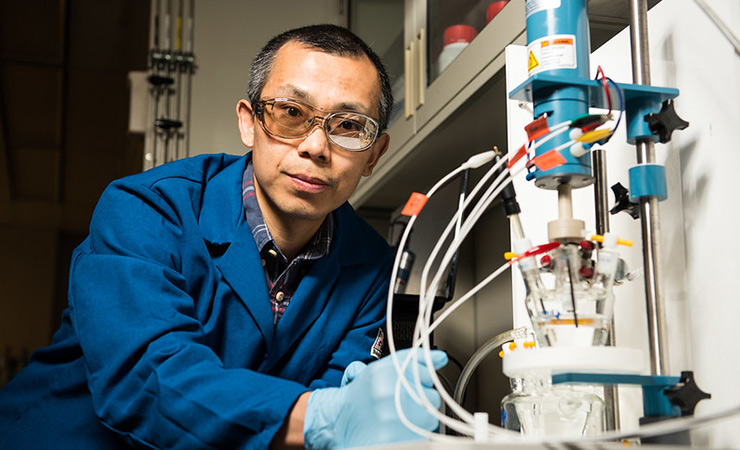 Other programs. Within the Office of Fossil Energy, the request proposes increasing funding from $23 million to $32 million for its R&D program on the separation of rare earth elements from coal and coal byproducts. The Office of Science would contribute $45 million, including $25 million through the Basic Energy Sciences program for research related to the separation, recycling, and substitution of rare earths.

Water Power. Within its 70% cut to the Water Power program’s topline, the administration is seeking a 36% cut for its Hydropower Technologies program and an 82% cut for its Marine and Hydrokinetic Technologies program. The discrepancy reflects a relative prioritization of work on hydropower grid integration and pumped storage. However, Congress has recently prioritized the Marine and Hydrokinetic program, increasing its funding from $41 million to $109 million over the last five years, while increasing the Hydropower Technologies budget from $19 million to $39 million. Policy bills in the House and Senate would recommend further increases for Water Power in future years, with continued emphasis on marine power sources such as wave and tidal energy.

Geothermal Technologies. While Congress has doubled funding for the Geothermal Technologies program over the last five years, from $55 million to $110 million, the administration proposes to cut its budget down to $26 million. Policy bills pending in Congress would recommend further increases, with the Senate’s American Energy Innovation Act eyeing an immediate step up to $165 million. These funds would support such activities as building at least one additional site for the Frontier Observatory for Research in Geothermal Energy (FORGE) and improving geothermal heat pump technologies.

Solar and Wind Energy. While the administration is proposing to cut more than three-quarters from the Solar Energy and Wind Energy program budgets, pending policy bills would recommend levels near or above the current ones. Congress has increased funding for both programs in recent years, though the boosts have not been as proportionally large as those for the water and geothermal programs.

Versatile Test Reactor. Although the administration proposes cuts to most elements of DOE’s nuclear energy program, it is seeking to ramp up funding for construction of the Versatile Test Reactor facility from $65 million to $295 million. The facility would provide a U.S.-based capability for irradiating fuels, components, and materials intended for use in certain advanced reactor designs with the high-energy neutrons the reactors would employ. DOE provisionally estimates the facility will cost between $3 billion and $6 billion to build. There is bipartisan support for the facility in the House, where pending legislation would recommend $300 million for it in fiscal year 2021 and swiftly increasing funding thereafter. However, Senate appropriators have expressed reservations about the project and included direction in DOE’s latest appropriation to rein in spending on the facility until its cost range is officially established, which will potentially happen as early as this May.

Transformational Challenge Reactor. The administration proposes to increase funding from $23 million to $30 million for a project at Oak Ridge National Lab to demonstrate a small-scale nuclear reactor built using additive manufacturing by 2023. The project aims to accelerate the design, construction, qualification, and deployment of advanced nuclear energy systems and reduce their costs. 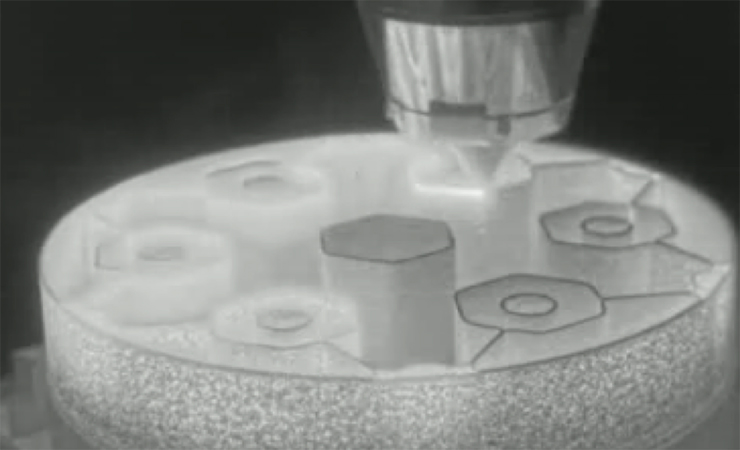 Nuclear waste storage. Reversing its position, the administration requests no funds this year to restart work on the long-stalled Yucca Mountain nuclear waste repository in Nevada. The state is deeply opposed to the project and President Trump spotlighted his new stance in a tweet on Feb. 6, declaring, “Nevada, I hear you on Yucca Mountain and my Administration will RESPECT you!” The administration instead requests $27.5 million for a new Interim Storage and Nuclear Waste Fund Oversight program that will explore options for temporary waste storage.

Coal FIRST initiative. Within the administration’s proposed cut to the Office of Fossil Energy’s topline, it proposes to increase funding for the Power Generation Efficiency program from $34 million to $217 million. The additional funding would advance Coal FIRST, the office’s “flagship” initiative to support “R&D insights and integrated designs of the coal plant of the future.” According to DOE, such plants would operate with higher efficiency, employ smaller and lower-cost power-generation units, and produce zero or near-zero emissions. Although the administration also proposed a sizable boost for the initiative last year, Congress ultimately reduced the program’s budget.

Grid resilience. Within the Office of Electricity, the administration is requesting funding for continued work on the North American Energy Resilience Model, which aims to improve DOE’s planning and contingency analyses related to electric grid vulnerabilities. It also includes funding to contribute to a potential new university-based National Science Foundation Engineering Research Center dedicated to obtaining “fundamental knowledge” about aspects of the electric power system.

Electromagnetic hazards. Within the Office of Cybersecurity, Energy Security, and Emergency Response, the administration requests $30 million to establish a “national physical energy system and component testing capability” for studying threats to the energy system from geomagnetic disturbances and electromagnetic pulse attacks. Congress rejected an identical request in its last appropriation, suggesting DOE had not shown why existing facilities could not be used for such work.