FYI spoke with Sethuraman Panchanathan about his vision for NSF, why he first came to the U.S., and his views on expanding the agency’s footprint beyond fundamental research. 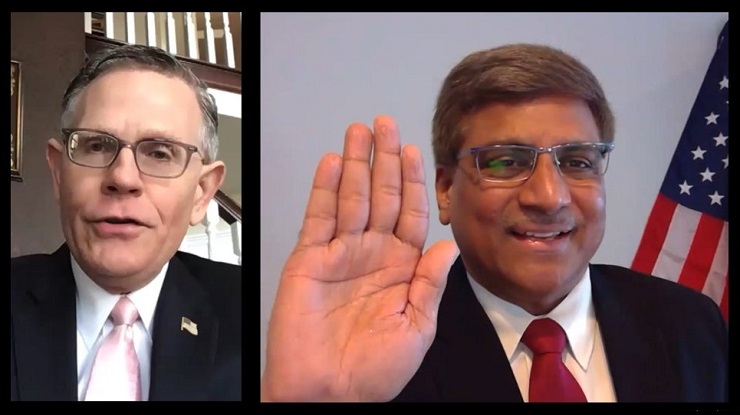 White House Office of Science and Technology Policy Director Kelvin Droegemeier swore in Sethuraman Panchanathan at a ceremony on July 2.

Sethuraman “Panch” Panchanathan began his tenure as director of the National Science Foundation on June 23, following a seven month Senate confirmation process. FYI spoke with Panchanathan shortly after he was sworn in this month by White House science adviser Kelvin Droegemeier, who led the agency on an acting basis after France Córdova completed her six-year term as director in March.

Outlining his vision for NSF, Panchanathan described it as revolving around three “pillars”: engaging more Americans in science across the socioeconomic and geographic spectrum, maintaining global leadership in science, and “advancing the frontiers of research into the future.”

He declined to comment specifically on the proposal pending in Congress to add a massive technology directorate to NSF, or on President Trump’s recent suspension of the H-1B skilled worker visa program, but spoke more generally about the value of application-oriented research and attracting scientists to the U.S. Addressing present debates about research security, he endorsed recommendations from the JASON study that Córdova commissioned last year.

Panchanathan influenced by his immigration experience

Born in Chennai, India, Panchanathan earned degrees in physics and electrical engineering before moving to Canada to pursue a doctorate at the University of Ottawa, where he later became a professor and founded a visual computing and communications laboratory. In 1997, he moved to the U.S. to take up a professorship at Arizona State University.

He added, “I was looking at how do I get my work to influence and be influenced by things that happen in the marketplace. And I find that there's no better place where the public-private partnership model really works.”

As a Canadian citizen at that time, Panchanathan said he used a visa program created under the North American Free Trade Agreement to start his career in the U.S. At Arizona State, he focused his work on human-technology interactions, developing haptic user interfaces for individuals with disabilities and co-founding two companies that developed physical rehabilitation technologies. Over time, he also took on administrative responsibilities, becoming the university’s chief research officer in 2010 and serving on NSF's governing board from 2014 through this spring.

Asked about his views on the H-1B visa program suspension, Panchanathan replied, “There are so many things that go into making positions and policies, and as a head of an agency, particularly coming in as a new head of an agency with not a whole lot of information [on the suspension], for me to weigh in on a particular position or a particular policy that is put in place, particularly when it is a short term policy, at least as it is outlined right now, would probably not be the best thing to do.”

Instead, pointing to the arc of his career, he said,

I'm a living example of [how], when you bring talent into this country and give it the right set of opportunities, it can prosper unbelievably well.

Panchanathan joins NSF amid a growing interest in Congress to rework the agency’s mission and structure.

The bipartisan Endless Frontier Act backed by Senate Minority Leader Chuck Schumer (D-NY) would rename the agency as the National Science and Technology Foundation and create a new directorate mandated to accelerate progress in select technology areas. Republicans on the House Science Committee have also introduced legislation that would direct NSF to commission an organizational review of its directorate structure, with an eye toward improving support for cross-disciplinary and trans-disciplinary research.

Declining to comment on any specific legislation, Panchanathan described how he views the relationship between NSF’s core mission of supporting fundamental research and the advancement of practical applications.

“It's a question of how do you balance the fundamental science and the applied science and translational science, but often people think that these are independent of one another, and sometimes even [have a] mistaken notion that somehow it's a linear pipeline,” he said, referring to the idea that new technologies flow directly from fundamental research. He continued, “In my experience, it doesn't necessarily work that way. When you are engaged in applied research, or translating your research, your fundamental research questions get altered, new fundamental research questions get exposed, not in all situations, but in quite a few situations.”

Panchanathan also noted that in testimony to a Senate committee last year, he called for the U.S. to develop a stronger ecosystem of partnerships between government, industry, and academia to speed the transfer of new technologies into the marketplace. Speaking to NSF’s role in seeding technology development initiatives, he said, “I'm thrilled that NSF is being looked upon as a place where those things can prosper, those things can scale, those things can have a huge impact.”

Another pressing issue Panchanathan will face is the pressure Congress is putting on the agency to guard against foreign governments exploiting the research that it funds.

Seeking guidance on the matter, Córdova turned to the JASON science advisory group, which often advises federal agencies on matters of national security. In NSF’s response to the report this March, the agency largely embraced its recommendation to strengthen existing research integrity protections as an alternative to establishing new categories of sensitive research.

“The JASON report, the way it is laid out, makes much sense to me. And unless something changes in a dramatic way, I don't see any reason for us to shift away from that,” he remarked. “It's really hard to classify things as sensitive: what is ‘sensitive,’ right? One has to define what's sensitive. So you're getting into splitting hairs. So I think staying with the [current classification] designations and working with them to strengthen them, maybe retool them — we can do those things to make sure that they meet the objectives.”

Speaking more broadly on his views toward international engagement in science, he said, “I know that NSF is open to global partnerships, the global science approach, and I expect that we will continue to do the same because that's what is expected of us.”