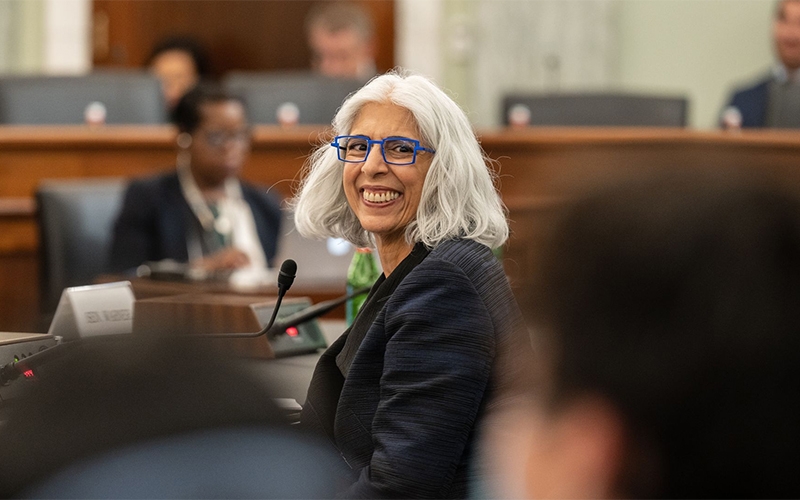 The Senate confirmed Arati Prabhakar yesterday as director of the White House Office of Science and Technology Policy on a vote of 56 to 40. President Biden nominated her for the job in June and stated she would also be his chief adviser on science and technology as well as a member of his Cabinet, pending her confirmation.

Trained as an engineer, Prabhakar previously served as director of the National Institute of Standards and Technology during the Clinton administration and of the Defense Advanced Research Projects Agency during the Obama administration. She is the first woman and the first person of color to be confirmed as OSTP director.

Prabhakar is joining the White House at a pivotal moment for science and technology policy, set up by the signing last month of the CHIPS and Science Act and the Inflation Reduction Act. Alongside last year’s Infrastructure Investment and Jobs Act, the new laws make sweeping policy changes across science agencies and provide unprecedented funding for clean-energy and semiconductor technology initiatives.

The administration is nearly as busy in biomedicine, standing up the new Advanced Research Projects Agency for Health and undertaking a major initiative to reduce cancer fatalities, all while grappling with COVID-19 and the weaknesses it exposed in the U.S. public health system.

To address these priorities, Prabhakar will be working in concert with other recently appointed officials across the administration.

Earlier this month, Biden brought in John Podesta as a senior White House adviser to oversee the hundreds of billions of dollars in clean energy initiatives funded by the Inflation Reduction Act. Podesta was President Clinton’s chief of staff and he coordinated climate policy for President Obama. National Climate Advisor Gina McCarthy stepped aside last week, and her job is now held by Ali Zaidi, who had been her deputy. OSTP also plays a major role in clean-energy policy, with deputy director Sally Benson, a professor on leave from Stanford University, taking the lead on that portfolio.

Just this week, the administration announced the team that will oversee the semiconductor initiatives funded by the CHIPS and Science Act. Commerce Department Chief Economist Ronnie Chatterji is moving to the National Economic Council to coordinate the overall effort, and NIST Material Measurement Laboratory Director Eric Lin will be interim director of a new CHIPS R&D Office. Prabhakar is apt to take a strong interest in the matter as her own career has focused intensely on semiconductor innovation, including as first director of the DARPA’s Microelectronics Technology Office in the early 1990s.

Prabhakar’s DARPA experience will also come into play in setting up ARPA–H. Last week, Biden named biologist Renee Wegrzyn to lead the new agency. From 2016 to 2020, Wegrzyn was a program manager in DARPA’s Biological Technologies Office, which Prabhakar created in 2014 during her time as director. Prabhakar has previously commented that she felt DARPA took a more solutions-oriented approach to biomedicine than NIH, and backers of the new agency insist it should cultivate a DARPA-like culture of risk-taking. Biden has not yet nominated a new director for NIH in the wake of Collins’ departure at the end of last year.

Since last year, the office has been working to harmonize and clarify research security policies across agencies, and to reinforce their scientific integrity policies. Then, last month the office announced that by 2026 all federal agencies must require that scientific articles deriving from research they fund be made freely available immediately upon publication, along with certain accompanying data. That policy shift has sparked intense speculation about how the business model of science will change in response.

Although most Republicans voted against Prabhakar’s confirmation, none spoke in opposition to her on the Senate floor.

When her nomination barely cleared the Senate Commerce, Science, and Transportation Committee in July, Ranking Member Roger Wicker (R-MS) said concerns had arisen about her answers to written questions on “right to life issues.” Apparently referring to abortion and fetal tissue research, he suggested the matter was resolvable pending assurances about retaining the Hyde Amendment, an appropriations provision that prohibits funding for abortions. However, he opposed proceeding with the nomination at that time.

Sen. Joe Manchin (D-WV) was the only Democrat to vote against Prabhakar. His office did not respond to an inquiry about his opposition, but he has previously allied with Wicker on preserving the Hyde Amendment.

Speaking on Prabhakar’s behalf on the Senate floor, Commerce Committee Chair Maria Cantwell (D-WA) praised her experience at DARPA and NIST and her commitment to manufacturing, STEM education, and bringing more women into the scientific workforce. She also noted that Prabhakar had worked behind the scenes to shape CHIPS and Science Act provisions covering the National Science Foundation’s new Technology, Innovation, and Partnerships Directorate.

“Before her nomination, Dr. Prabhakar was an important voice in support of this effort of a tech directorate, reaching out to House and Senate colleagues and helping to shape the directorate in its focus on big national and security challenges,” Cantwell remarked.

After Prabhakar is sworn in, congressional Republicans are apt to continue scrutinizing OSTP over the scandal that led to Eric Lander’s resignation. It was publicly revealed early this year that Lander had created a verbally abusive atmosphere at the office, flouting the emphasis that the office and Biden himself had placed on workplace equity and inclusivity. Lander soon stepped down in the face of widespread condemnation.

Republicans have cited whistleblower testimony in alleging that concerns about Lander’s behavior were raised soon after his nomination and that the problem extended beyond him. They also drew attention to revelations that some of his clashes were with members of OSTP's legal staff over ethics questions, including the use of personnel indirectly funded by former Google CEO Eric Schmidt. Schmidt is a major advocate in technology policy and in 2021 made a $150 million donation to the Broad Institute, which Lander founded and led prior to his move to the White House. OSTP and Schmidt have defended the arrangements.

At Prabhakar’s nomination hearing, Wicker noted she also has “business ties” with Schmidt, apparently referring to the support the philanthropic initiative Schmidt Futures gave to a nonprofit research organization she founded in 2018.

Prabhakar agreed with Wicker it is important to avoid the appearance of any conflicts of interest, and, addressing OSTP’s workplace culture issues, she remarked, “If I’m fortunate enough to be confirmed, people will be my first priority.”

Aside from the Lander episode, OSTP is also facing a House Republican investigation over deputy director Jane Lubchenco’s violation of integrity rules while serving as an editor of a major scientific journal prior to joining the Biden administration.

In a letter sent to OSTP yesterday, House Science Committee Ranking Member Frank Lucas (R-OK) and Natural Resources Committee Ranking Member Bruce Westerman (R-AR) questioned Lubchenco’s continued involvement in updating federal scientific integrity policies. Linking the issue to the Lander scandal, they wrote, “The leadership of the OSTP should be models of behavior for the entire federal research enterprise, not appear to receive special treatment or be held to less strict standards than every other federal employee.”

The Republican inquiries around OSTP are currently at a slow boil, but if the party gains control of the House or Senate in November they could decide to ratchet up their pressure.