This report details the initial employment outcomes of astronomy bachelor’s, master’s and PhDs from the classes of 2014, 2015 and 2016 combined.    This publication includes data on starting salaries, employment sectors and fields of employment.  The report also includes data on the proportion of astronomy bachelor’s and master’s recipients who continued their education after receiving their degrees.  The data come from the annual AIP follow-up survey conducted in the winter following the academic year in which the students received their degrees.

The number of students earning undergraduate astronomy degrees in the US has been steadily increasing. In 2015–16, an all-time high of 469 astronomy bachelor’s degrees were awarded; this was up 14% from the previous year. In this report, we will look at what these students did after earning their astronomy degrees using data from our degree follow-up survey. In addition to students earning bachelor’s degrees, we will also look at those earning masters and doctorates in astronomy. Since the number of graduates each year is relatively low, we combine survey responses from the classes of 2014, 2015, and 2016.

In recent years, women have comprised about a third of the astronomy bachelor’s degrees awarded (Table 1). For comparison, women represented about one-fifth of the physics bachelors during the same time period. Almost half (48%) of the astronomy bachelors indicated they were graduating with a double major. About two-thirds of those with double majors indicated they were also majoring in physics. Mathematics was the next most common other major. 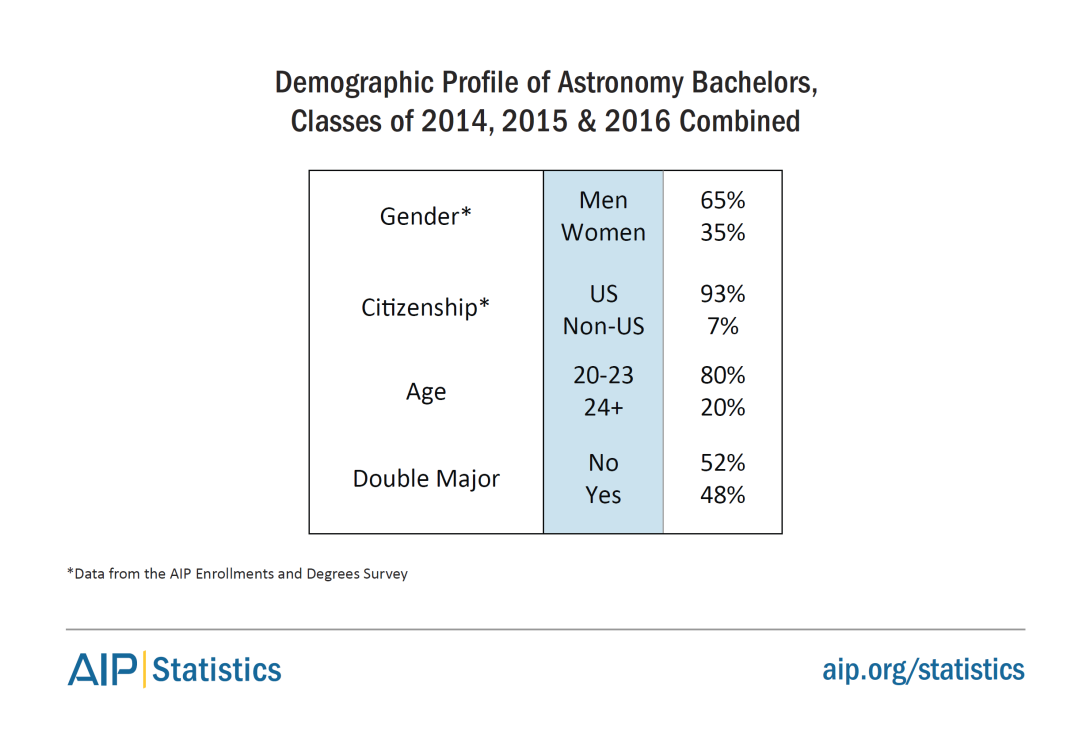 Post-degree outcomes for new astronomy bachelors were fairly evenly split between those entering the workforce and those pursuing graduate studies (Figure 1). A greater proportion of the women (49%) pursued graduate studies than the men (36%). Differences in initial status also occurred depending on whether an individual graduated with a double major. Astronomy bachelors who graduated with a double major were more likely to be enrolled in graduate programs than those who did not. 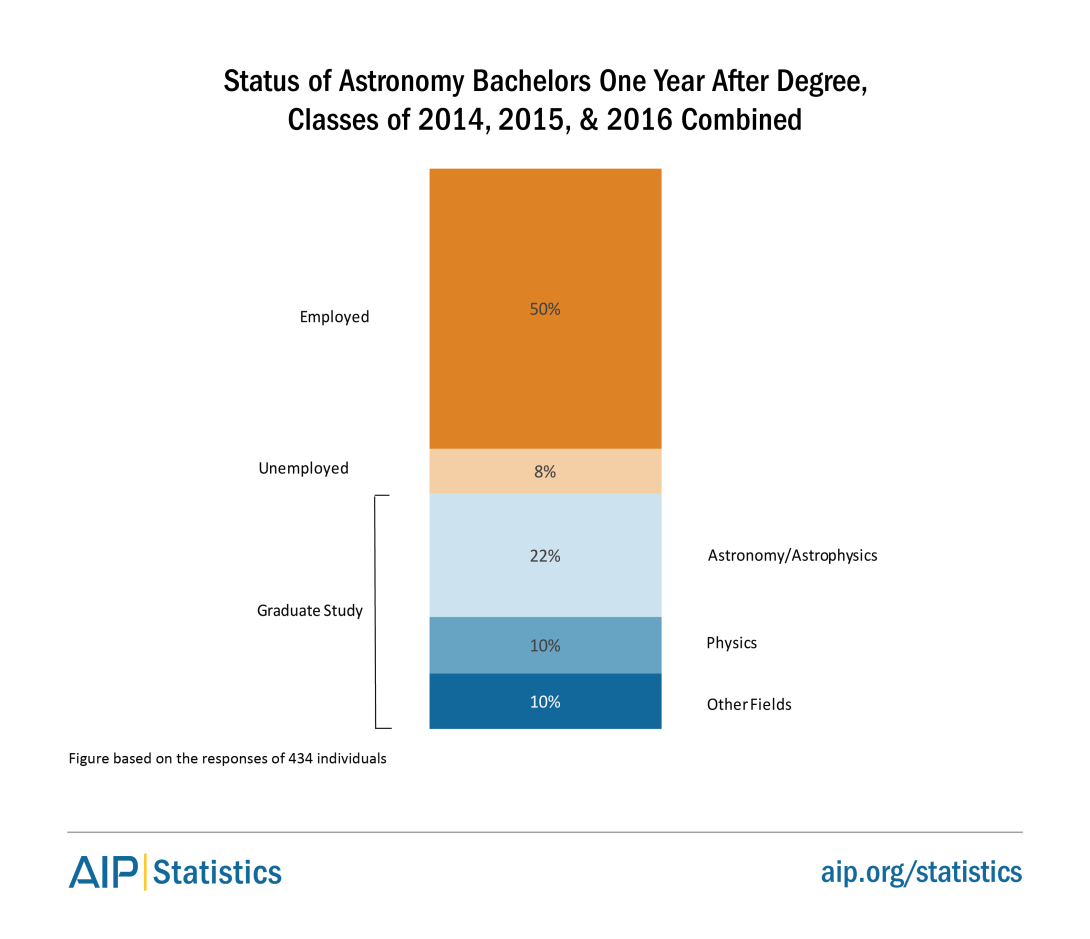 Overall, three-fifths of respondents indicated receiving career guidance from a faculty member. Astronomy bachelors who were heading to graduate school were more likely to report having received career guidance than those who entered the workforce.

Of the astronomy bachelors immediately pursuing graduate studies, about half were enrolled in an astronomy or astrophysics graduate program. The remaining graduate students were pursuing a variety of other disciplines, with physics being the most common. Students enrolled in physics or astronomy graduate programs were well supported, with virtually all having received support in the form of a teaching assistantship, research assistantship, or fellowship.

Half of the new astronomy bachelors were in the workforce in the winter after they received their degrees. Thirteen percent of these bachelors were continuing in positions they held prior to receiving their degrees. About one in seven (14%) of the astronomy bachelor’s recipients indicated that they planned to enroll in a graduate program starting the next academic year, with an additional 12% enrolling in two or more years.

New astronomy bachelors secured employment in many sectors of the economy, with over half (58%) working in the private sector in the winter after they graduated (Figure 2). More than two-thirds of those employed in the private sector indicated they were working in a STEM (science, technology, engineering and math) field. The majority of these positions were in either engineering or computer science, with the remainder split between physics, astronomy, and other technical fields. Common job titles included “software developer” and “research analyst.” Astronomy bachelors in private sector non-STEM positions worked in a variety of positions ranging from financial analysis to retail. About half of the bachelors in these non-STEM private sector positions indicated they were solving technical problems on a daily or weekly basis.

Almost one-fifth of the astronomy bachelors entering the workforce found jobs at colleges and universities (Figure 2). Of these, over half reported that they were working in the fields of physics or astronomy. Some worked at the institution’s observatory. Most the bachelors working at colleges and universities had job titles similar to “research assistant.” Over half did not consider their employment to be long term, indicating they had plans to enroll in a graduate program within a year, and almost 90% planned to enroll within 3 years. 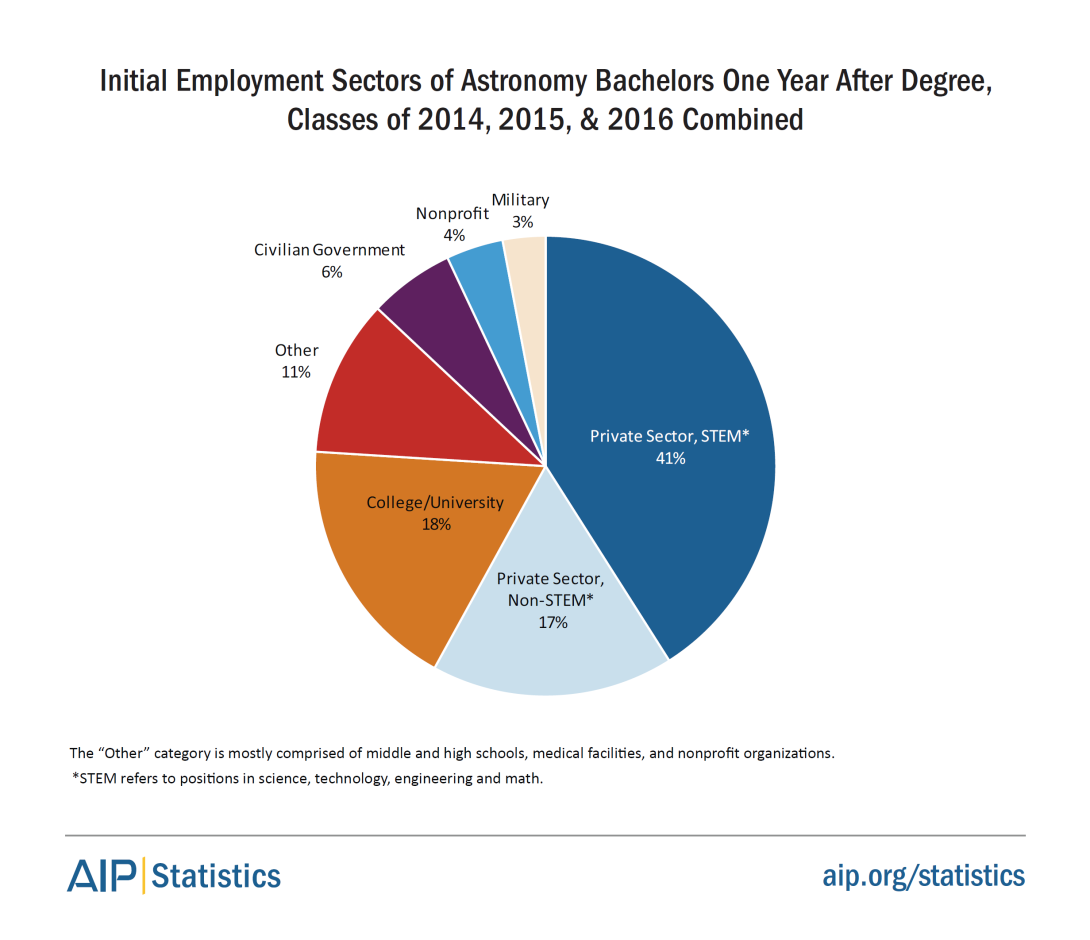 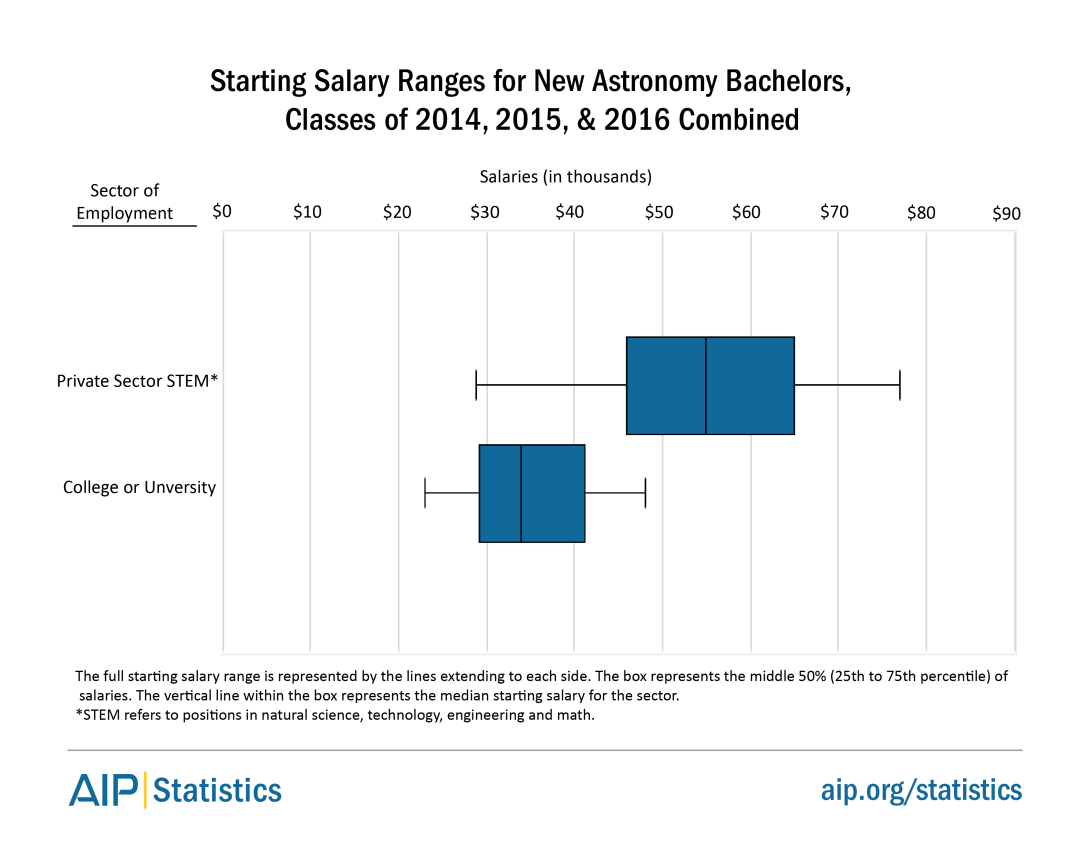 The classes of 2014, 2015, and 2016 averaged 24 exiting astronomy master’s recipients per year. We received responses from 32 individuals (44%) from these 3 classes combined; we define these as individuals who received a master’s degree in astronomy or astrophysics and did not continue their graduate studies in that department. Women comprised 43% of the astronomy masters awarded in these 3 graduating classes. (Table 2). Even though we have received outcome data for a large proportion of exiting astronomy masters, the low number of degrees overall limits what can be reliably reported. 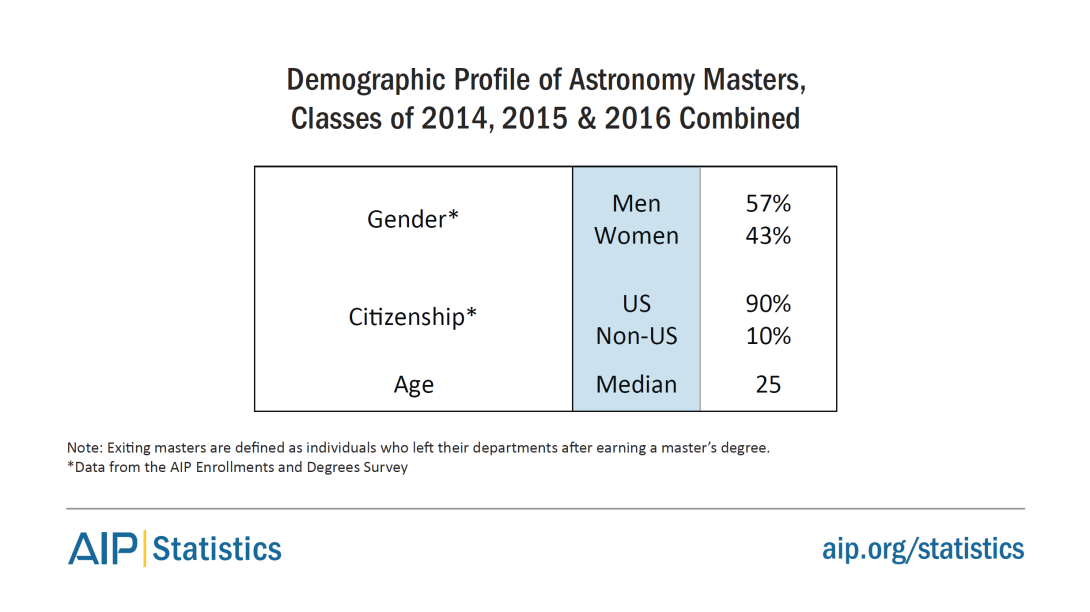 The classes of 2014, 2015, and 2016 averaged 149 astronomy or astrophysics PhDs per year. This number does not include physics PhD recipients with dissertation subfields of astrophysics who received their PhDs from a physics department. Women represented a third of the recent degree recipients and non-US citizens a quarter (Table 3).  For comparison, women represented about one-fifth of the physics PhDs and 47% of the non-US citizens during the same time period. 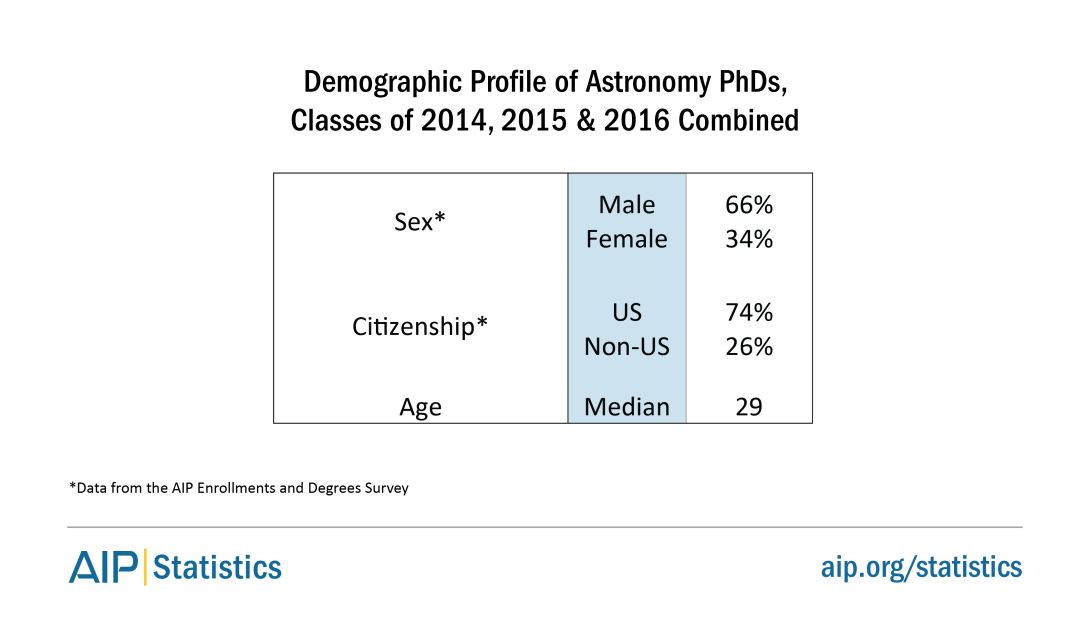 The most commonly reported subfields of dissertation for astronomy PhDs from the classes of 2014, 2015, and 2016 combined were “Planetary Studies” and “Extragalactic Astronomy,” with 18% of the PhDs indicating they specialized in one of these two fields. Women were more likely to have specialized in planetary studies or active galaxies than men.

Astronomy PhDs pursued a variety of post-degree career paths. Approximately one-third of the non-US citizens and one-eighth of the US citizens left the US after receiving their degree. Virtually all who left the US indicated that they accepted postdoctoral fellowships (postdocs). These respondents are not included in the analysis that follows.

Although decreasing in recent years, more than half of new astronomy PhDs accepted postdocs in the winter after receiving their degree (Figure 4). This decrease is offset by an increase in the proportion accepting potentially permanent positions, 40% in the combined classes of 2015 and 2016. As in the past, astronomy PhDs that were not US citizens accepted postdocs at a higher rate than US citizens (75% vs 53%) for the combined classes of 2014, 2015, and 2016. 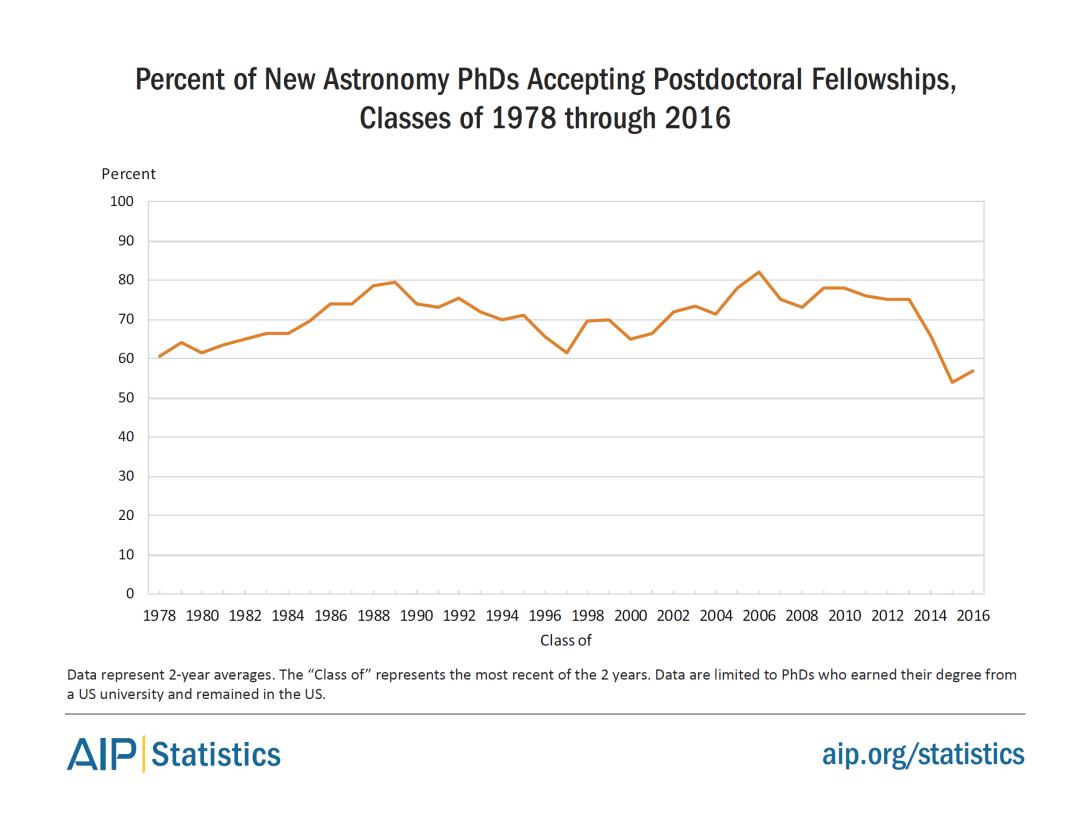 Almost three-quarters of the new astronomy PhDs who accepted postdoctoral fellowships were working in academia, with almost a quarter employed in civilian government positions (Table 4). Virtually all of the new astronomers holding postdoctoral fellowships were working in the fields of physics or astronomy. In addition to those accepting postdocs, seven respondents were employed in other temporary positions, all of which were in academia.

Astronomy PhDs reported accepting postdoctoral fellowships for a variety of reasons. The most commonly cited reason for taking a postdoc was that it was “a necessary step to get a desired future position,” with 69% indicating it was a very influential reason. Other common reasons included “to obtain research experience in my field” and “to work with a particular scientist or research group.”

The majority (64%) of the new astronomy PhDs holding potentially permanent positions were employed in the private sector (Table 4). These PhDs primarily worked in the fields of software and data science, engineering, and business, with job titles such as “data scientist” and “quantitative researcher.” All of those employed in the private sector indicated that they regularly worked on a team, were solving technical problems, and were involved with programming or system software. About a third indicated they were regularly involved with either basic or applied research. A quarter of the potentially permanently employed astronomers were working in academia, with the majority having the title of assistant professor. 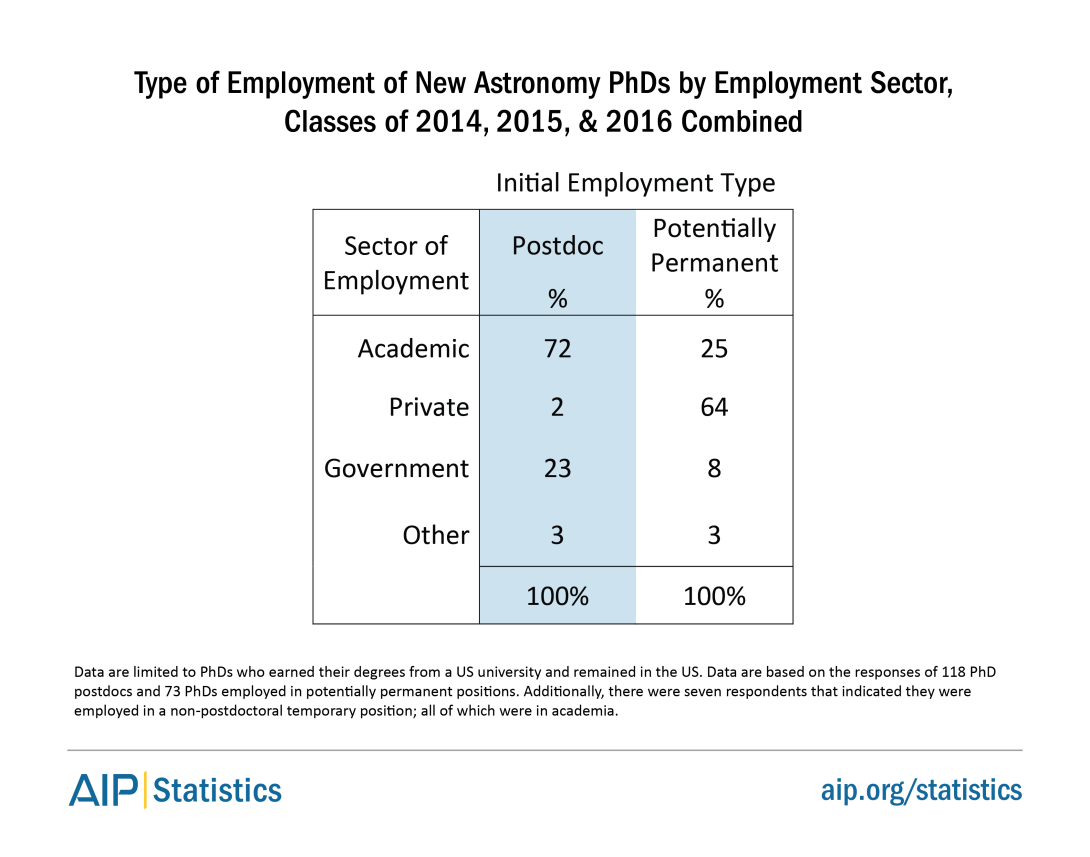 Overall, only a few (9%) of the astronomy PhDs in the workforce felt they were underemployed, and the majority of these were holding postdoctoral appointments. Only two individuals indicated they were not at least somewhat satisfied with their positions. 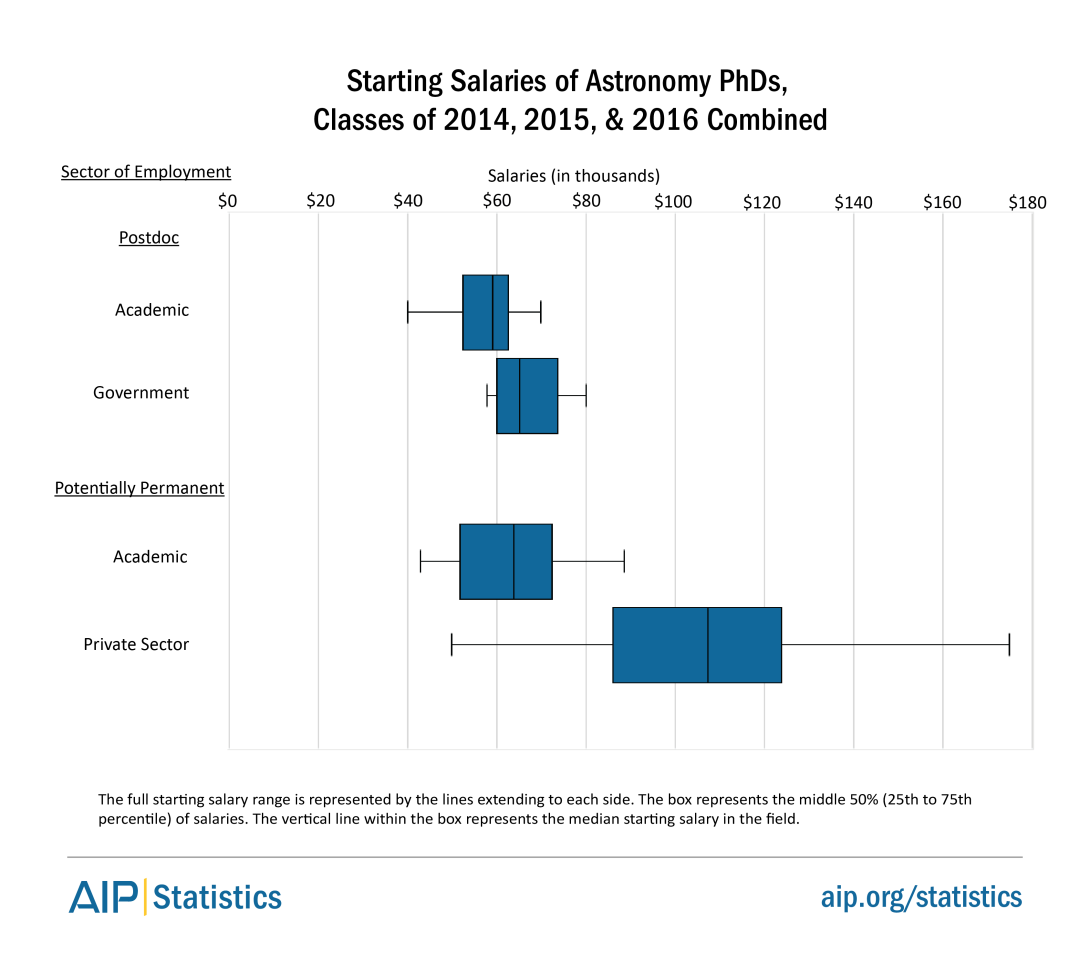 Each fall the Statistical Research Center conducts a Survey of Enrollments and Degrees, which asks all degree-granting physics and astronomy departments in the US to provide information concerning the number of students they have enrolled and counts of recent degree recipients. At the same time, we ask for the names and contact information for recent degree recipients. This degree recipient information is used to conduct our follow-up survey in the winter following the academic year in which respondents received their degrees. The post-degree outcome data in this “focus on” come from that survey.

The astronomy bachelor’s classes of 2014, 2015, and 2016 consisted of 428, 459, and 469 bachelors, respectively. We received post-degree information on 34% of these degree recipients. Twenty-one percent of the post-degree data came from advisors, with the remainder coming from the bachelors themselves. Four percent of astronomy bachelors for whom we had outcome data did not remain in the US after receiving their degrees; these recipients are not included in the analyses.

The exiting astronomy master’s classes of 2014, 2015, and 2016 consisted of 28, 22, and 22 masters, respectively. We received post-degree information on 44% of these degree recipients. Forty-seven percent of the post-degree data came from advisors, with the remainder coming from the masters themselves. Three percent (one respondent) of astronomy masters for whom we had outcome data did not remain in the US after receiving their degrees and are not included in the analyses.

The astronomy PhD classes of 2014, 2015, and 2016 consisted of 147, 130, and 170 PhDs, respectively. We received post-degree information on 60% of these degree recipients. Twenty-six percent of the post-degree data came from advisors, and the remainder came from the PhD recipients themselves. PhD recipients with dissertation subfields of astrophysics who received their doctorate from a separate physics department are not included in this analysis. Seventeen percent of the astronomy PhDs for whom we had outcome data did not remain in the US after receiving their degrees and are not included in the analyses.

We thank the many astronomy departments, degree recipients, and faculty advisors who have made this publication possible.