Physics PhDs receive training in both general physics principles and methods, as well as the specific subject matter of their dissertation. Through this process they become experts in how to conduct research, think critically, solve problems, and advance knowledge in their area of research. This combination of skills and knowledge opens a wide spectrum of employment opportunities for new degree recipients. This focus on shows the different employment choices that new physics PhDs made while securing employment in a variety of fields and work environments. It will also examine how long-term career goals help shape the initial positions that PhDs accept.

Almost half (47%) of physics PhD recipients in the combined classes of 2015 and 2016 held a postdoc in the winter following the year they received their PhD (Figure 1). Postdocs are temporary positions with a defined period of mentored training in research where individuals acquire professional skills and research independence. Forty percent of the new PhDs were working in potentially permanent positions. The least common initial post-degree employment category, other temporary positions (7%), are similar to postdocs in that they have a specified ending date and tend to be concentrated in academic settings but are more focused on teaching. Additionally, some recent PhDs (6%) indicated that they were unemployed and seeking a job in the winter following receiving their degree. 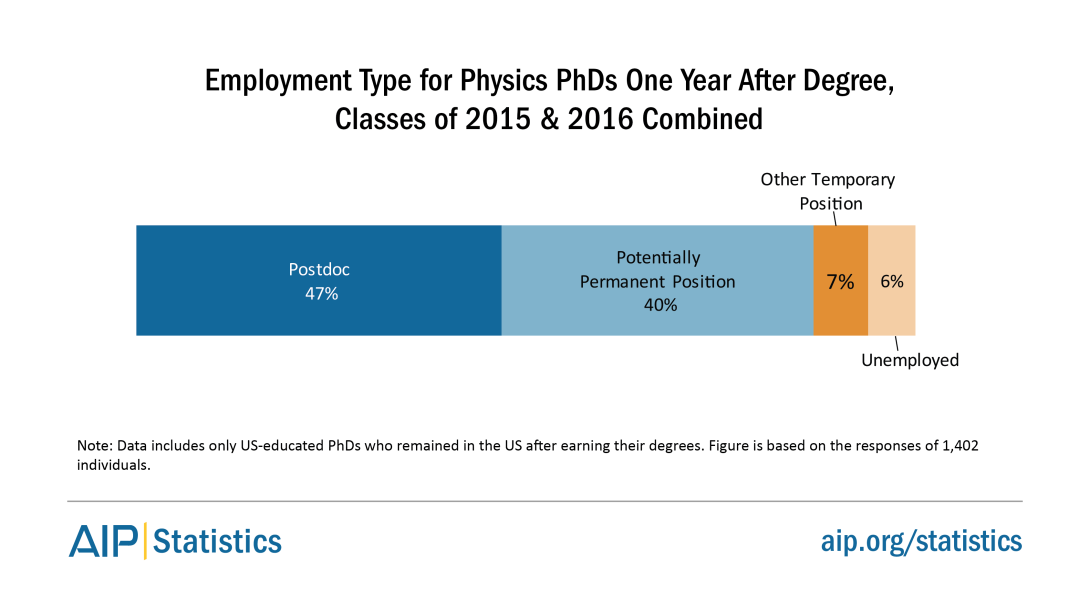 The tables and figures in this focus on represent physics PhDs who received their PhD from a US institution and were residing in the US in the winter following the academic year in which they received their degree. For the combined classes of 2015 and 2016, non-US citizens comprised 47% of the physics PhDs conferred. Our survey response data indicates that 9% of US citizens and 19% of non-US citizens left the US after receiving their doctorates. The most common type of initial employment for both US and non-US citizens that left the US was a postdoctoral fellowship. 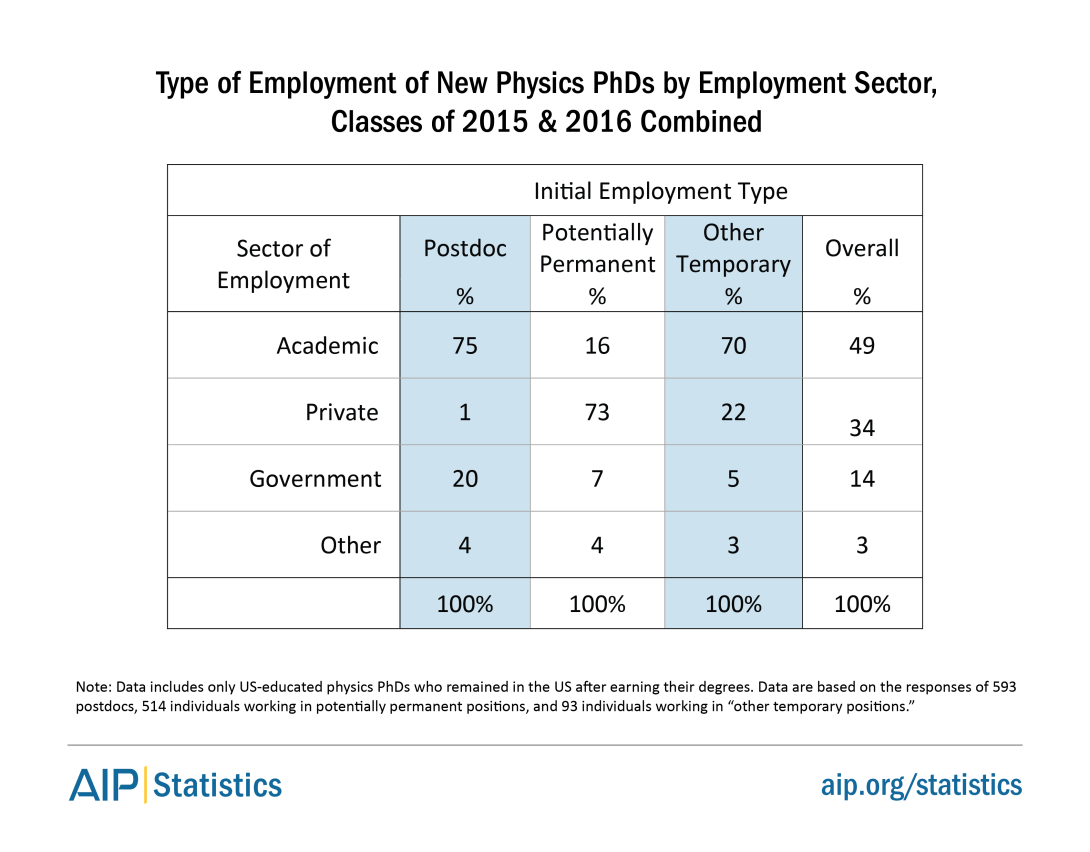 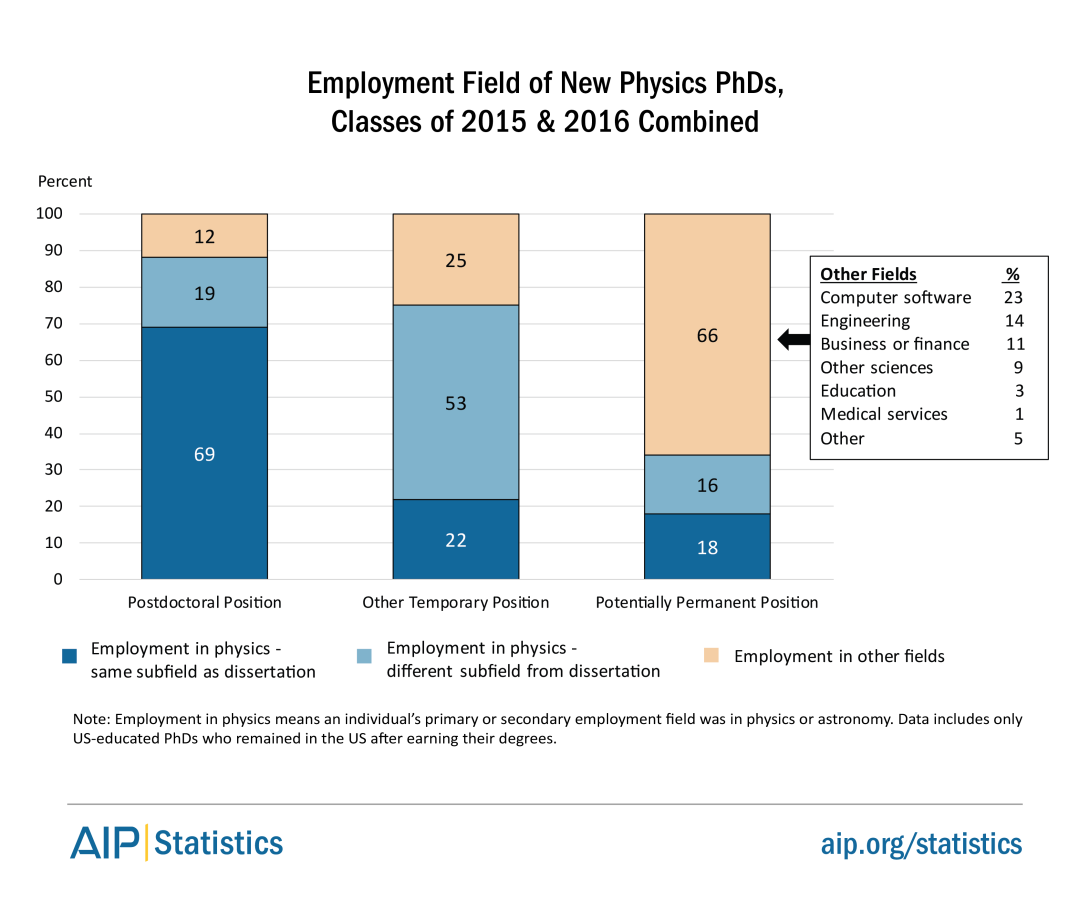 For more insight into the types of potentially permanent positions accepted by new physics PhDs, visit AIP’s Statistical Research Center’s resource “Who's Hiring Physics PhDs?” The data for the resource pulls together 5 years of PhD follow-up survey responses, dividing them into 10 self-identified fields of employment. It provides the names of the employers that hired new physics PhDs to work in fields such as engineering, business, physics, computer software and hardware, etc. The employer name listings include links to the company’s websites. The resource includes the starting salary ranges, job titles, and skills used for each field. 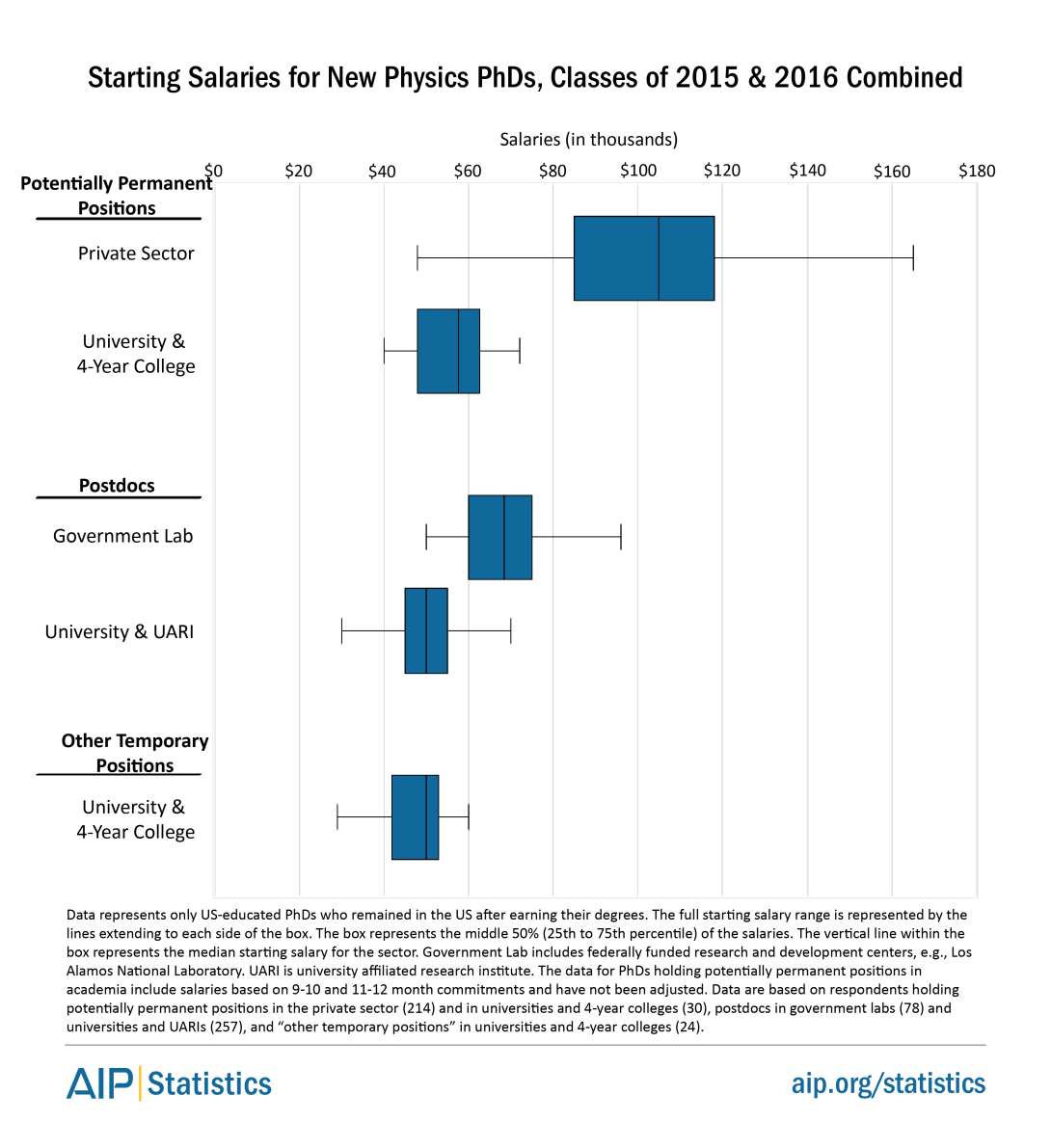 Starting salaries for physics PhDs differ based on type of position accepted and sector of employment (Figure 3). Those employed in potentially permanent positions in the private sector typically had significantly higher starting salaries than the other employment types, with a median of $105,000 and a very wide range. The median starting salary for physics PhDs working in potentially permanent university and 4-year college positions was $58,000. About 60% of these academic positions were for 9-10 months of work. 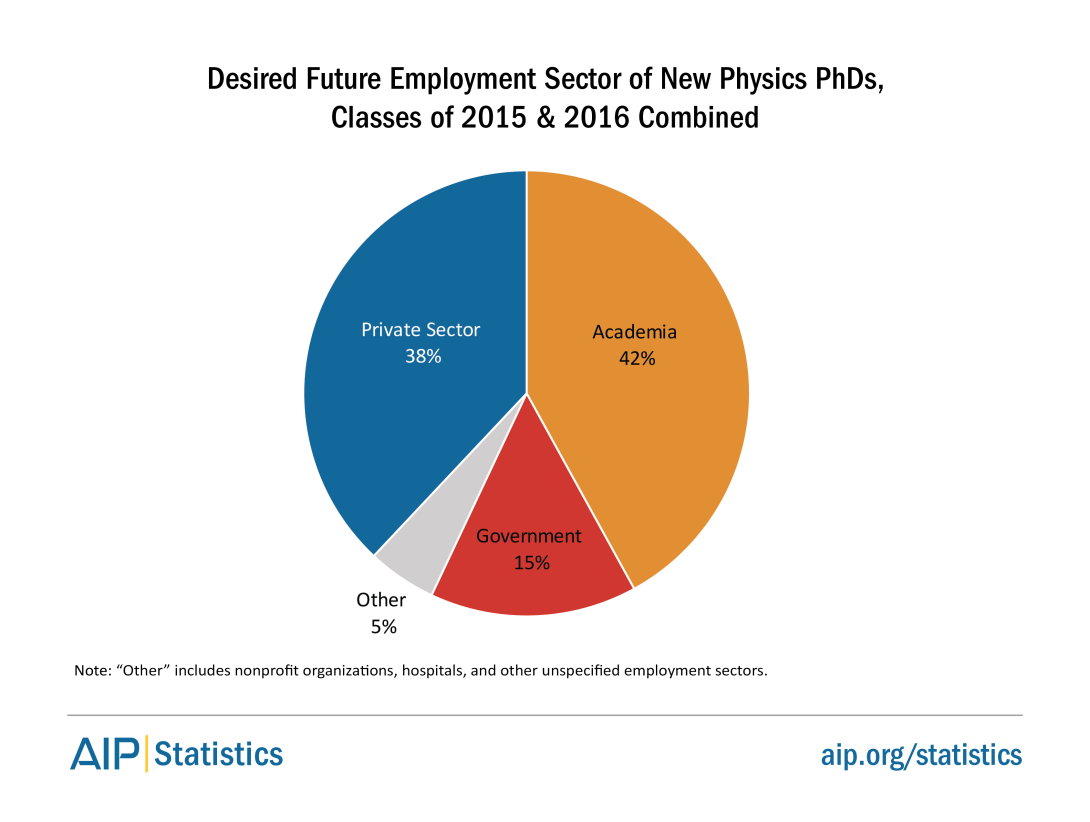 The type of initial employment position a new physics PhD accepts is likely the result of a number of factors. The decision may be influenced by professional goals, personal circumstances, and available positions. When those who accepted postdocs were asked why they accepted a postdoc, the most frequently cited reason was that it is a “necessary step to get a future position.” 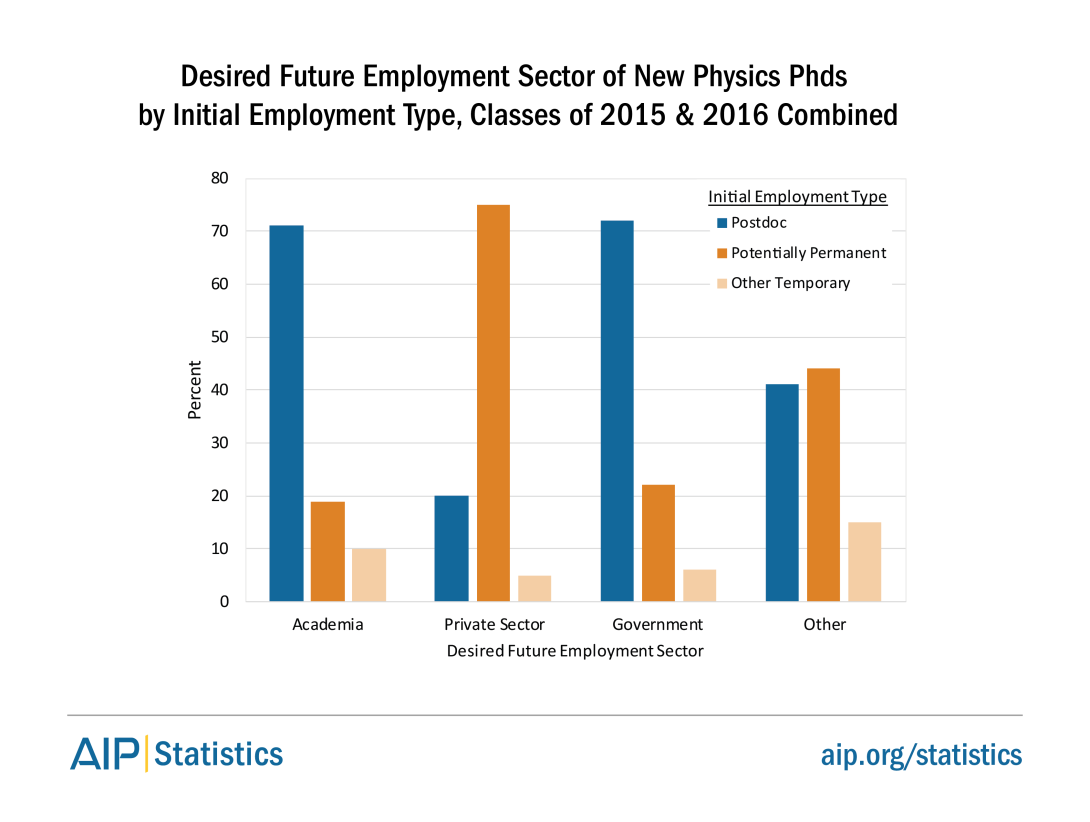 Looking at future career goals of new physics PhDs by the type of initial employment they accepted shows some clear patterns (Figure 5). New physics PhDs that had a desire to be working in academia or for the government in 10-years’ time were three-and-a-half times more likely to have accepted a postdoc as their first post-PhD position than those hoping to be working in the private sector. This is understandable, as successfully completing a postdoc is typically seen as a prerequisite for such a position, especially at research universities.

Physics PhDs with a desire to be working in the private sector in the future were far more likely to have accepted a potentially permanent position as their first post-degree position, with most of these positions already located in the private sector. Overall, the employment sectors that new physics PhDs were currently working in closely reflected the sector in which they hoped to be working in the future.

The AIP Statistical Research Center has also published other reports on Physics PhD employment. Please visit https://www.aip.org/statistics/employment/phds for further reading on the topic.

Each fall the Statistical Research Center conducts a Survey of Enrollments and Degrees, which asks all degree-granting physics and astronomy departments in the US to provide information concerning the number of students they have enrolled and counts of recent degree recipients. At the same time, we ask for the names and contact information for recent degree recipients. This degree recipient information is used to conduct our follow-up survey in the winter following the academic year in which respondents received their degrees. The post-degree outcome data in this focus on come from that survey.

The follow-up surveys for the classes of 2015 and 2016 were administered in a web-based format. Those who did not respond were contacted up to five times with invitations to participate in the survey. The physics PhD classes of 2015 and 2016 consisted of 1,860 and 1,819 individuals, respectively. We received post-degree information on 44 percent of these degree recipients. Sixty-five percent of these responses came from the PhD recipients themselves, while the other 35 percent came from advisors. PhDs who left the US after receiving their degrees were not included in the analysis.

Postgraduation Planning During a Pandemic: Effects of COVID-19 on Physics and Astronomy Seniors’ Career Paths
How Well Do Physics Bachelor’s Degree Recipients Perform on the MCAT and LSAT Exams?
Changes in Time Allocation During the COVID-19 Pandemic for Full-Time Faculty in Physics and Astronomy
Physics Masters: One Year After Degree
Physics Doctorates: Skills Used and Satisfaction with Employment