What duties and responsibilities do mid-career, PhD physicists perform in academic positions?  What do they find rewarding about their work

The PhD Plus 10 Study was our first-ever follow-up of mid-career physics PhD recipients. In 2011, we contacted individuals who graduated with a physics PhD from the classes of 1996, 1997, 2000, and 2001 in the United States. Of those who responded to our survey, 597 were employed in academia. In this report, we focus on three groups: (1) respondents employed in physics or astronomy departments at four-year institutions, (2) respondents employed in departments other than physics or astronomy at four-year institutions, and (3) respondents employed at two-year colleges. In this report, we will describe the activities that academic employees perform during their work and what they find rewarding about their positions. 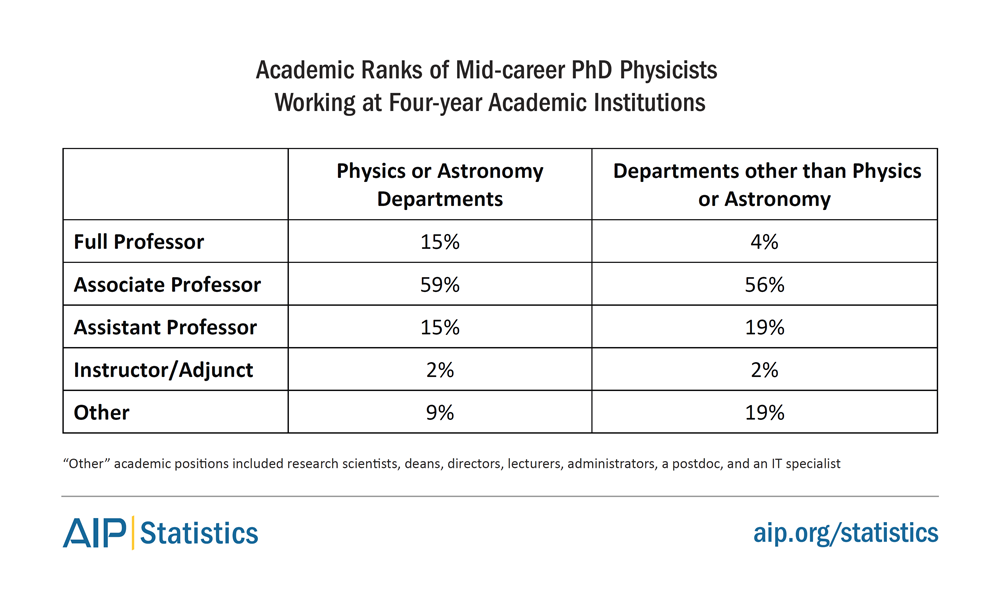 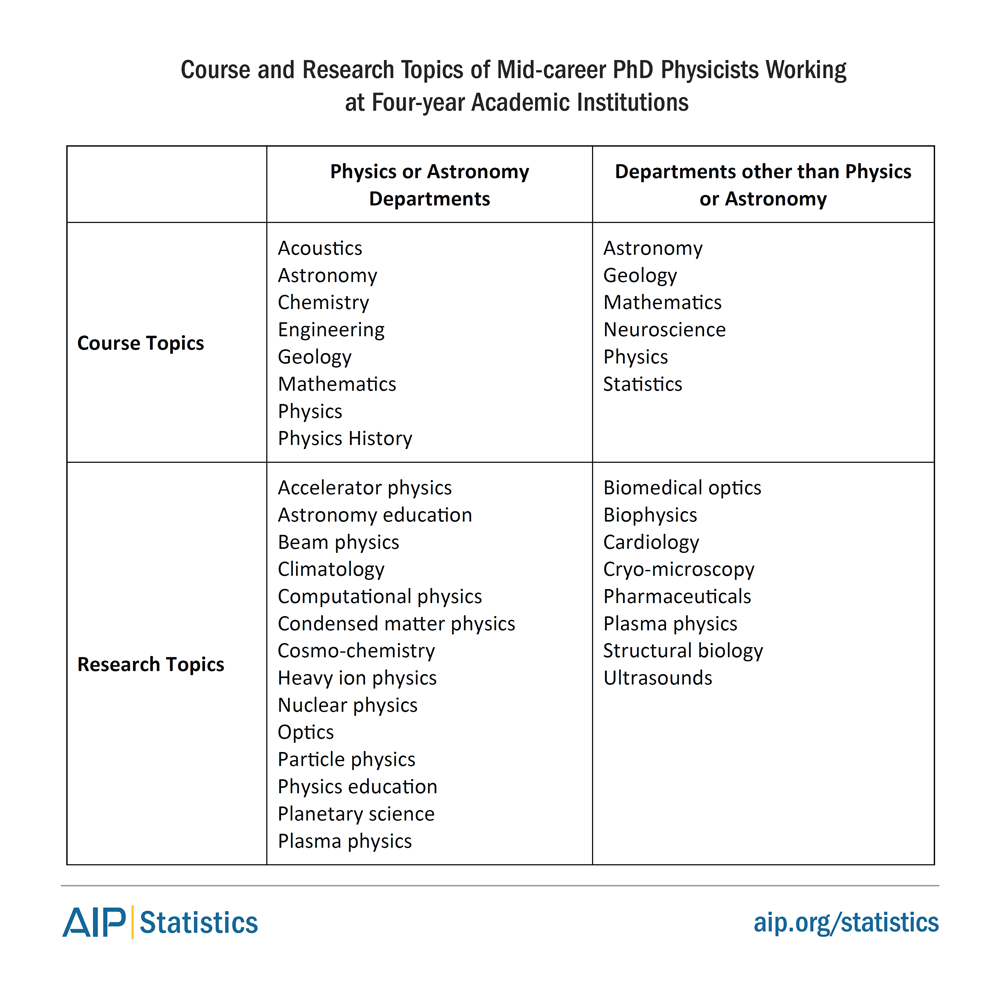 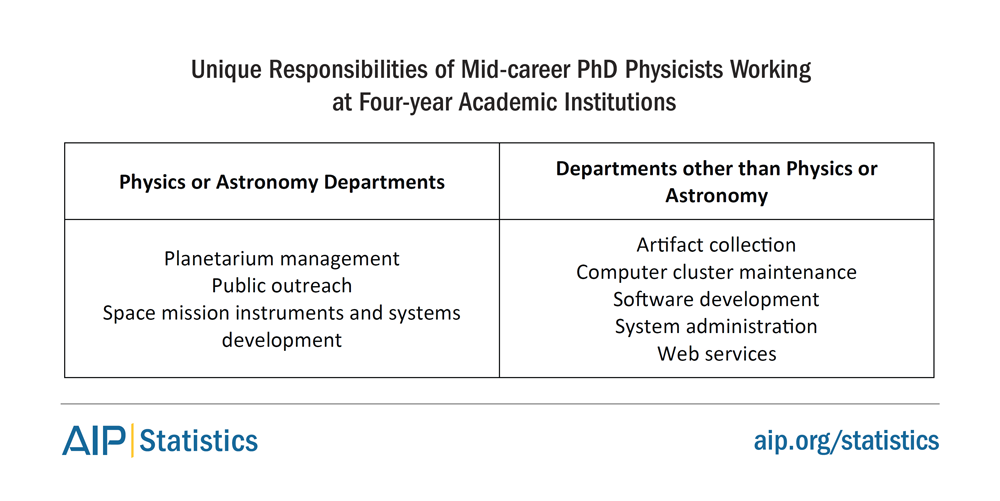 How often they use different skills

Four-year institutions. In our survey, we asked academic respondents “how often do you use or do the following things in your current job?” Respondents rated how often they used 24 different skills (daily, weekly, monthly, less than monthly, or not at all). Figures 1–5 compare the skill usage at four-year institutions across five categories: research skills, interpersonal skills, technical skills, managerial skills, and communication skills. 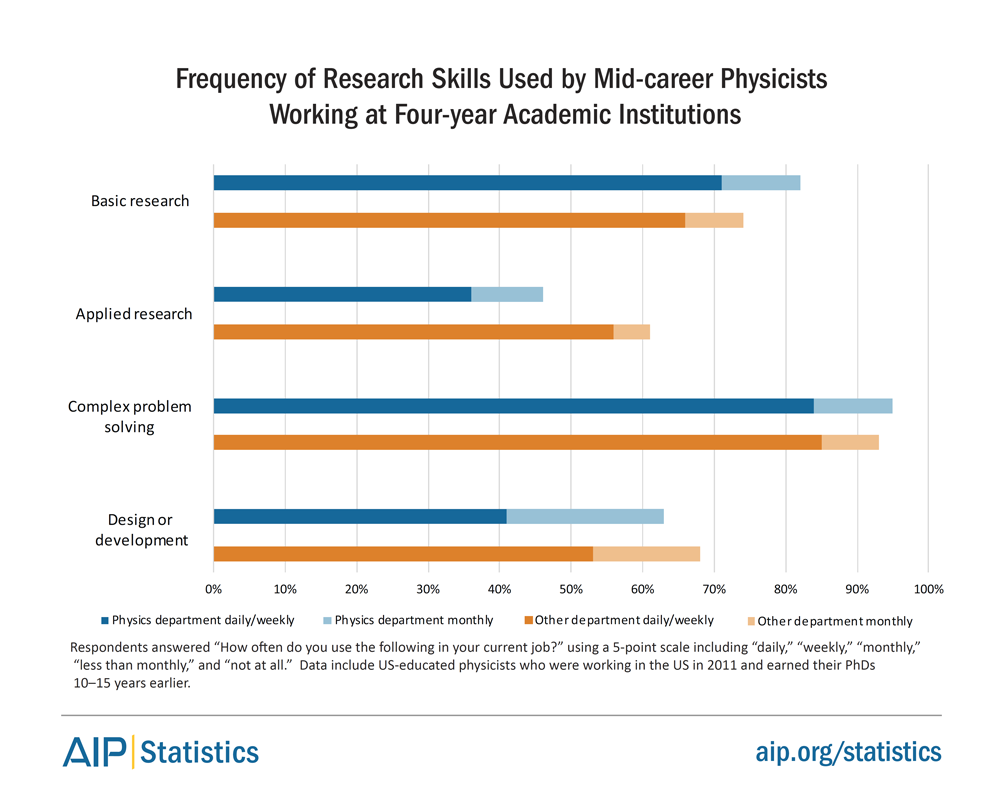 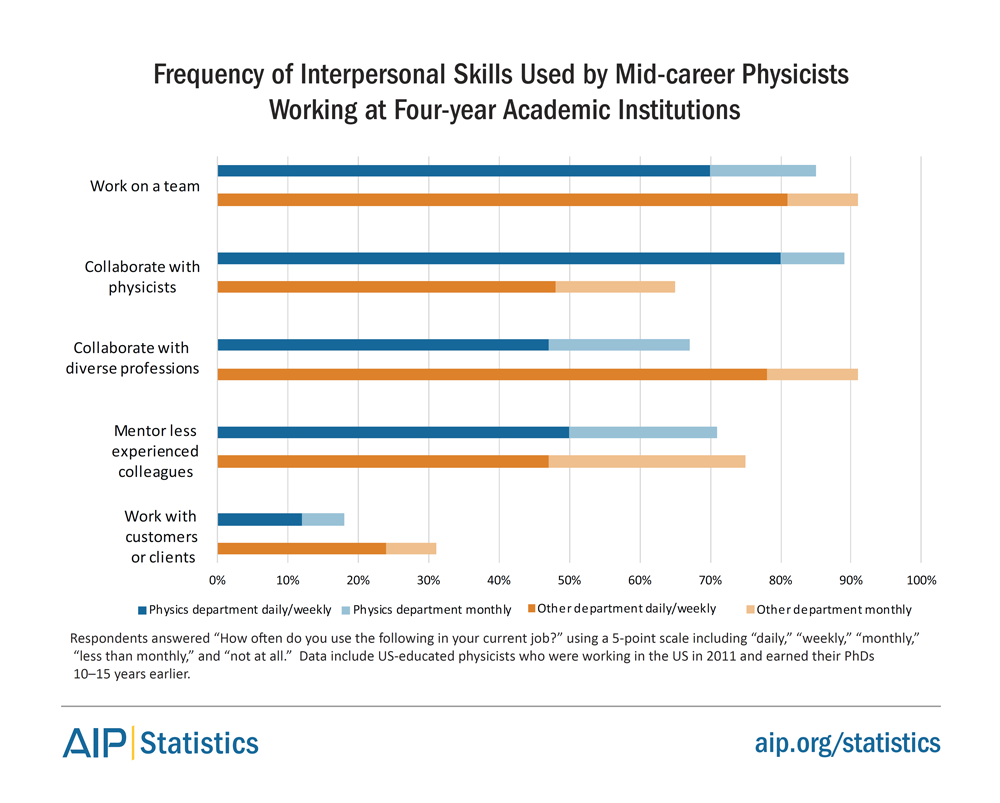 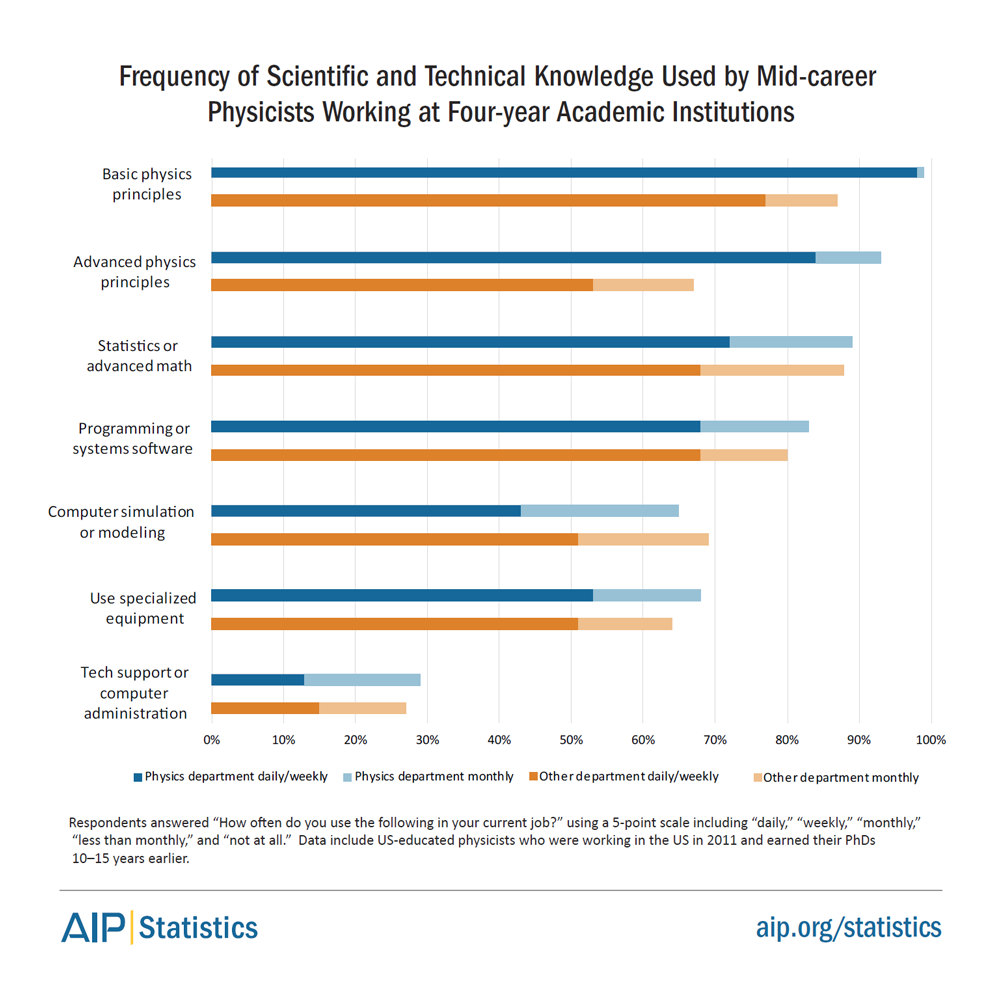 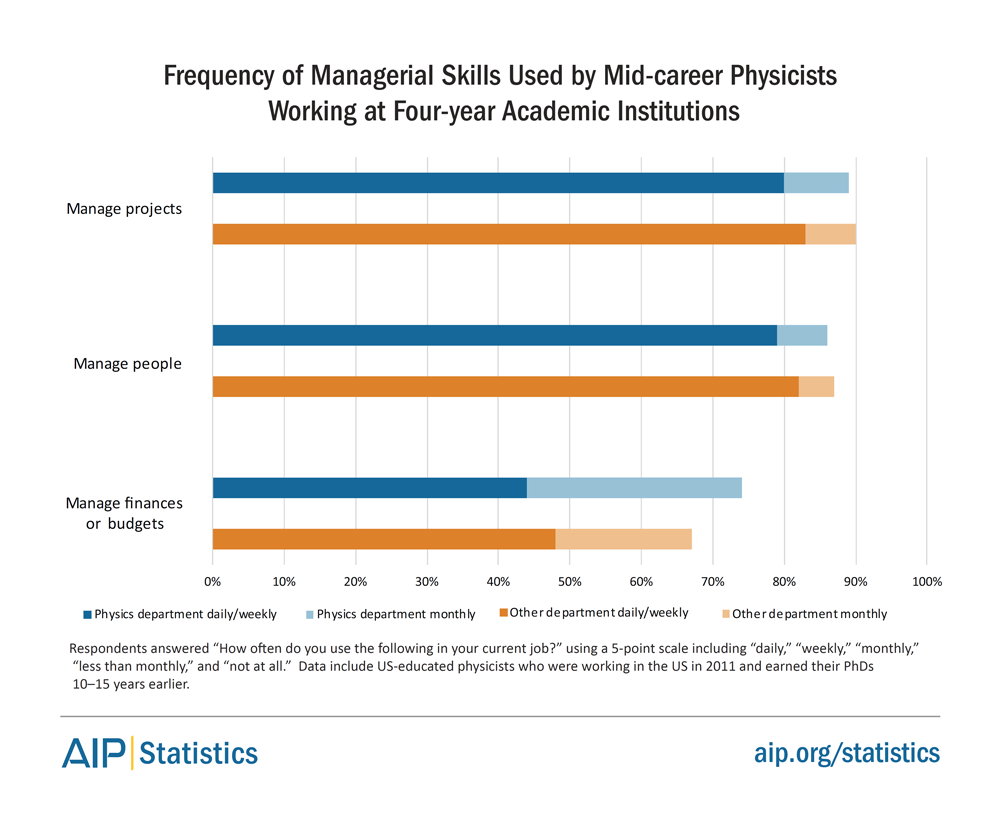 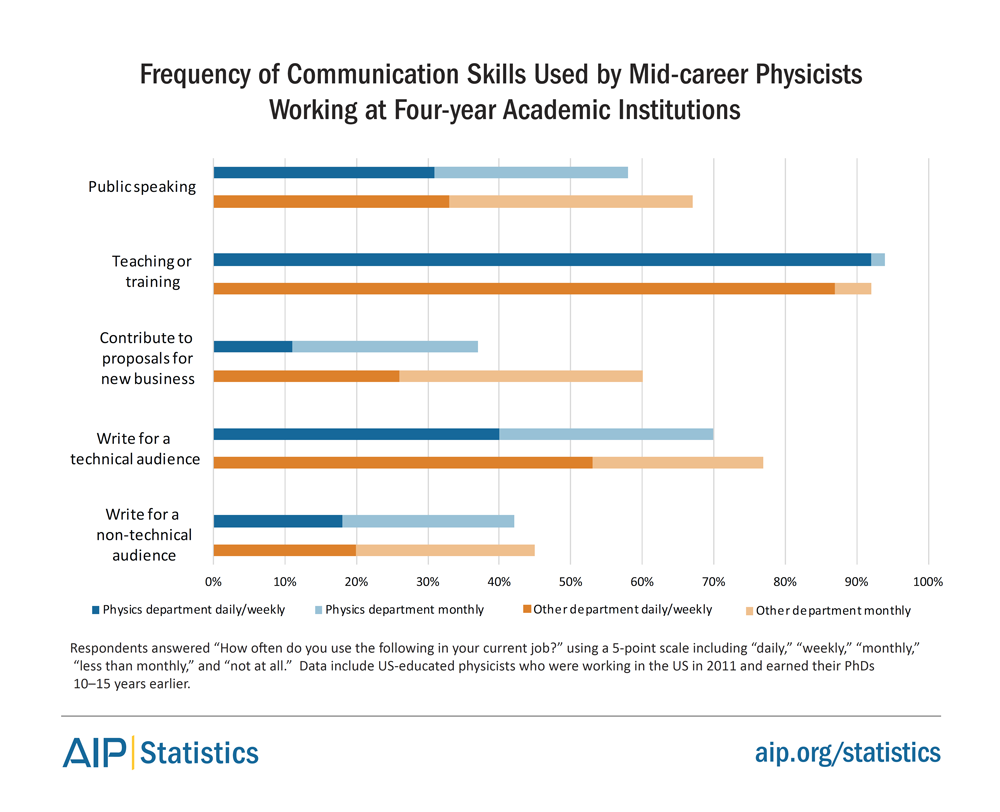 Two-year colleges. Due to a smaller sample size, we were unable to directly compare responses from faculty members at two-year colleges with those from faculty members at four-year institutions. Respondents from two-year colleges most often reported using the following skills: teaching, using basic physics principles, and collaborating with individuals from diverse professions. Contributing to proposals, performing applied research, and providing technical support were skills used least frequently.

What is rewarding about their work 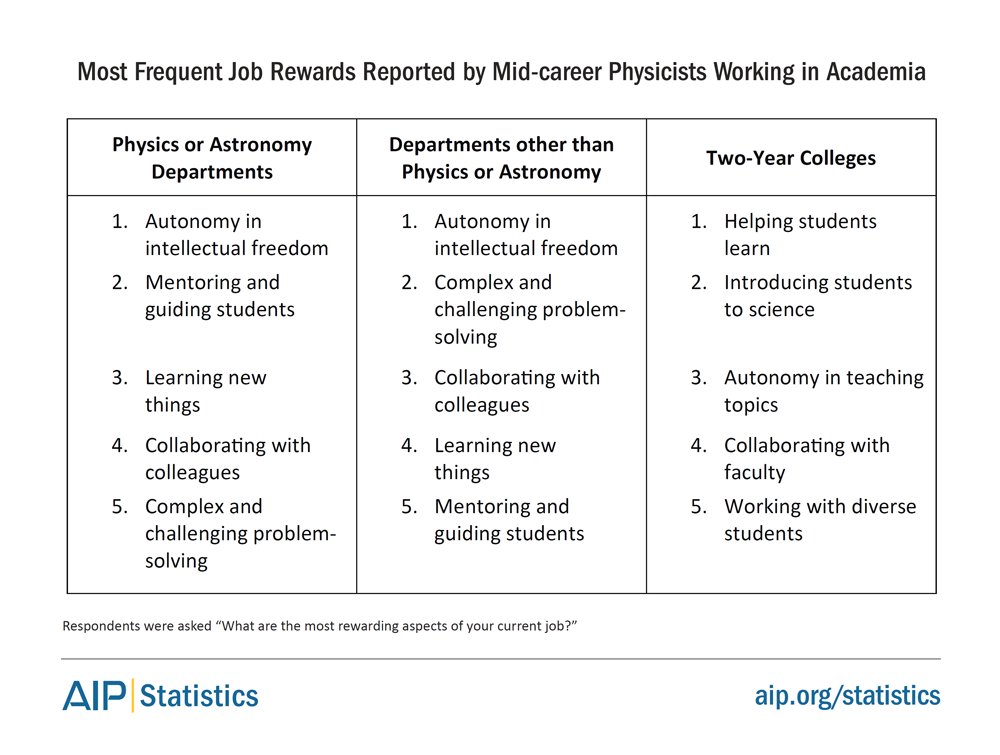 Unique rewards. Table 6 lists the unique job rewards reported by respondents in physics or astronomy departments, other departments, and two-year colleges. Respondents in physics or astronomy departments felt rewarded when they performed public outreach, developed instrumentation, helped students struggling with physics, and published in physics journals.  Respondents from other departments felt rewarded when they developed software and when their work was applied in society. Respondents from two-year colleges described unique teaching rewards such as working with diverse students and working at an institution that prioritizes teaching. 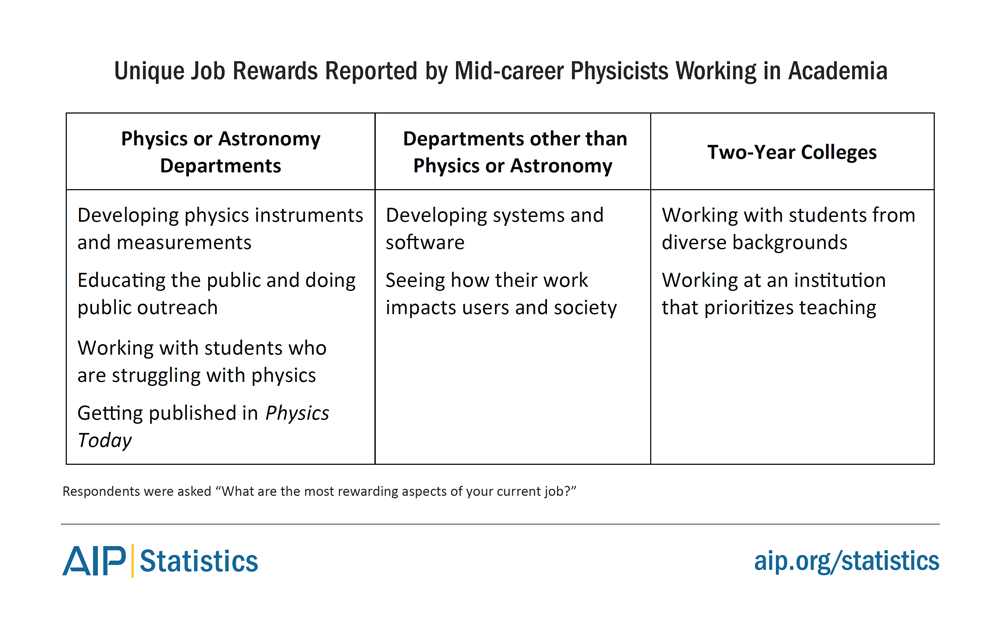 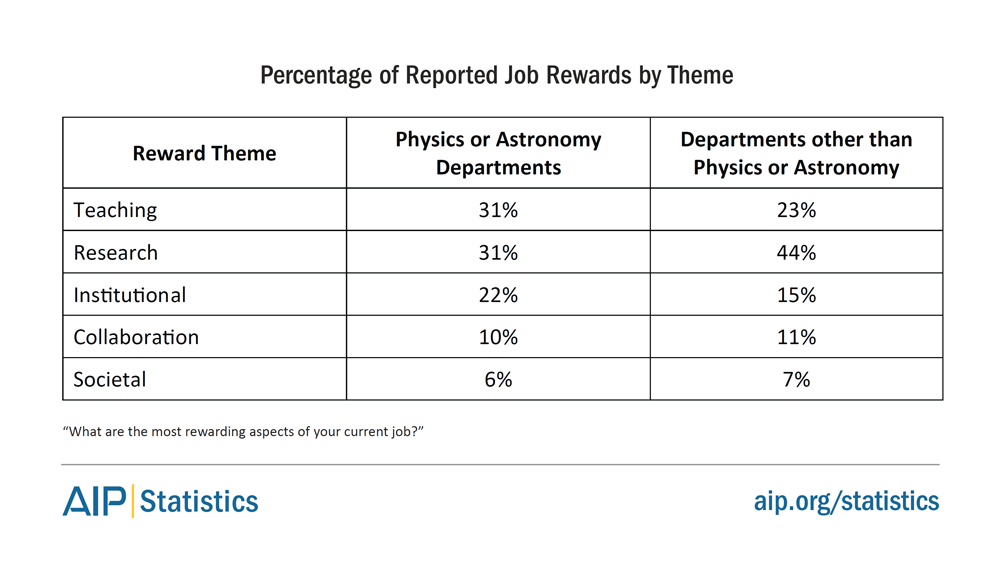 At physics or astronomy departments, respondents most frequently reported teaching and research related rewards. At other departments, respondents most frequently reported research related rewards. Due to a smaller sample size, we were unable to directly compare responses from faculty members at two-year colleges with those at four-year institutions. Of two-year college respondents, teaching rewards were reported the most often, and were 62% of the total number of reported job rewards.

In the following section, we describe all five reward themes reported by respondents, and provide samples of quotes that represent each theme.

Teaching rewards. This theme includes any reported rewards related to teaching activities and interactions with students. Respondents in academia enjoyed working with students, especially those who were motivated, passionate, and from diverse backgrounds. They felt rewarded when they positively influenced their students’ way of thinking and helped them better understand both the teaching material and the natural world around them. For some, they felt rewarded when they supported students who initially struggled in class, or students who were initially uninterested or anxious about the course material. Additionally, many enjoyed mentoring students who might become future scientists or science teachers. They frequently reported helping their students design research projects, find employment, or further their education. Other respondents focused on developing their own teaching skills, and enjoyed designing and innovating new education techniques.

“Working with students who are passionate about learning”

“Inspiring others to expand their intellectual horizons”

“Seeing students succeed and move on in their education”

“Teaching people who are resistant to learning physics, and when they learn to enjoy it, it is

“Seeing that I make a difference in my students’ mindsets”

“I enjoy [working with] good students who strive to succeed”

“Helping students who do not have other educational opportunities”

“Working with pre-meds to get over their fear of physics”

Research rewards. This theme describes any reported rewards related to mental and procedural tasks during the research process. Many academic respondents enjoyed their work when it was intellectually challenging, involved solving new and cutting-edge scientific problems, and involved discovering new things about the world. In research projects, they enjoyed designing experiments, creating new software or instrumentation, finding results, and publishing their findings. Most research rewards were reported by respondents at four-year institutions, but there were some two-year college respondents who also enjoyed performing research over the summer and publishing results.

“The feeling that I am discovering fundamental principles, and learning new physics. Priceless”

“Discovering something new about my world”

“Learning new physics and being involved with cutting-edge physics problems”

“Figuring out how to do complex experiments”

“Freedom to define and explore new, compelling problems in space and planetary science”

“Getting physics results after preparing new instrumentation over several years”

“Discovering something no one else has known before”

“Discovering how the world works and solving puzzles”

“Challenge of working on cutting edge problems in biology”

“New experiments and new theories to explore and develop”

“Having the summer free to do my own research”

Institutional rewards. This theme includes any rewards that were related to an institution’s benefits, resources, or supports for their current positions. Most importantly, academic respondents valued autonomy and flexibility in their current positions, and enjoyed managing their own research interests, teaching interests, and work schedule. Others valued job benefits provided in their positions such as job security, salary, sabbaticals, and free time over the summer. Respondents had different opinions about what they valued in their department and university work environment. Some preferred it when their institution prioritized teaching. Others preferred it when their institution prioritized research, especially when there was less pressure to publish research findings.

“The ability to use my own best judgment, both in how I teach, and what I choose to research”

“[Having] a flexible schedule is great for family life”

“[Having] more free time in summer than most people”

“Research with not so much pressure to publish or obtain grants”

“Having the freedom to do research on topics I choose.  The ability to set my own schedule and work priorities”

“The ability to work on problems that are interesting to me”

“I can design and execute my own labs, choose my own text, sequence topics as I like”

“Flexibility, freedom to set my own goals and hours”

Collaboration rewards.  This theme describes any rewards related to social interactions with non-students. Many respondents enjoyed their work when they collaborated with colleagues during research and teaching, particularly with collaborators from other disciplines and other countries.

“Discussions with non-science faculty on broad array of interesting topics”

“Opportunities to interact with others, often from fields outside of physics, which can spark  interesting lines of research”

“Interactions with scientists around the world”

“Working with colleagues from other disciplines”

“Working with a diverse range of people”

Societal rewards. This theme includes any rewards related to society or the larger scientific community. Respondents working in physics or astronomy departments enjoyed creating scientific instruments, measures, and hardware that helped other scientists in their fields.  Furthermore, respondents felt rewarded when their work was recognized by the scientific community, such as being published in Physics Today. Lastly, they felt rewarded when they helped the general public better understand science and improved science education. Respondents employed in departments other than physics or astronomy felt rewarded when they designed software and systems that helped others in their fields.  Respondents from two-year colleges did not specifically mention any rewards related to society or the larger scientific community. However, the number of respondents from two-year colleges was small, and these rewards might have been reported with a larger sample size.

“Changing the science literacy of US Citizens”

“Being part of a major effort to impact science teaching”

“When my research was mentioned in an article in Physics Today”

“Creating software that is widely used by scientists”

“The work is challenging, stimulating, engaging, and most definitely employed to improve human health"

When academic employees reported on what they found rewarding about their work, they reported rewards related to teaching, research, institutional benefits, social collaborations, and positively impacting society and the scientific community. The most frequently reported rewards at four-year institutions and two-year colleges included: having the autonomy to pursue intellectual and teaching interests, mentoring and working with students, learning new things during research, collaborating with colleagues, and solving challenging and complex problems.

During 2011, we contacted over 3,400 physics PhD recipients from the classes of 1996, 1997, 2000, and 2001, and who graduated from US institutions. We received responses from 1,544 individuals that were currently working in the US. We know that the respondents are not representative. It was easier to find members of the more recent classes than the earlier classes, and based on an analysis of the respondents by contact wave, we believe that it was harder to contact individuals employed in industry than those in academia or the government. So, academics are over-represented among our respondents.

For a complete overview of the methodology, please see the Appendix in Common Careers of Physicists in the Private Sector by Roman Czujko and Garrett Anderson. This report is available online here (or at https://www.aip.org/statistics/reports/common-careers-physicists-private-sector).

You can sign up to receive e-mail alerts which notify you when we post a new report. Visit www.aip.org/statistics/e_updates to sign up. You can indicate your area(s) of interest; we will send you an e-Update only when we post a new report that includes data of interest to you. If you sign up for every possible notification, you should receive no more than 20 messages in a year.

[1] See “Physicists in the Private Sector: Briefly describe your duties and responsibilities in your current job” and “Physics PhDs Ten Years Later: Duties and Rewards in Academic Positions”