Results from the 2018 Academic Workforce Survey

The percentage of women among physics faculty continues to rise, reaching 19% in 2018.  Likewise, the percentage of women in each academic rank continues to rise. The rank of full professor is now 12% female which represents a steady increase over time, up from 6% in 2006 (Table 1).  In 2018, 21% of associate professors were women and 25% of assistant professors were women. This increase in the representation of women in professorial ranks may reflect the increase of women earning doctorates in physics over time (Porter and Ivie, 2019). Increased representation may also be related to improved attitudes towards women and better climates in academic departments, making academia a more viable career path for women. 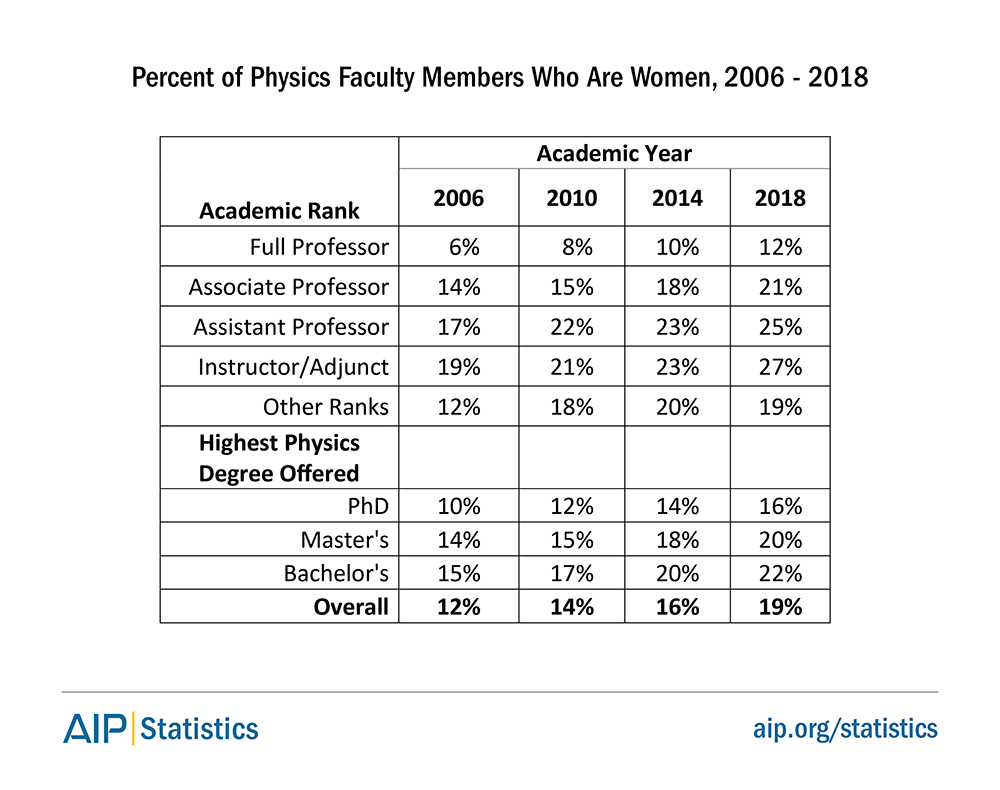 The total number of new hires in physics has remained relatively stable in recent years. There were 519 new faculty positions filled in 2014, 557 in 2016, and 519 again in 2018; the reason for the increase in 2016 is unclear.  For newly hired female faculty members, the overall proportions and counts were also relatively stable between 2014 and 2018.  In 2014, 28% (146) of the faculty members hired were women, 26% (143) in 2016, and 27% (141) in 2018 (Table 2 and Figure 1).  The proportions of women hired at the tenured rank in 2016 and 2018, 30% and 27% respectively, were substantially higher than in 2014 when it was 9%. However, this increase represents very small changes in the actual number of women hired over time (<5) because of the small number of tenured positions filled each year.  Women’s advances in securing tenured positions occurred in conjunction with a slight increase in the number of female faculty members and overall declines in the number of tenured positions being filled, leading to the larger increase in the representation of women (Figure 1).

The proportion of women hired for tenure-track positions slightly varied between the years of 2014 and 2018.  In 2018, women were 26% of those hired for tenure-track positions compared to 28% in 2014 and 22% in 2016; however, the actual number of women remained steady at slightly more than 60 women hired in 2014, 2016, and 2018.  The slight variations in proportions result from larger changes in the number of men hired (Table 2 and Figure 1). In 2018, women were approximately 24% of the hires for temporary full-time employees, down substantially from 33% in 2014 and 29% in 2016.  Representation of women in non-tenure track permanent employee hires and part time employee hires increased slightly from 2014 to 2018, although the number of women hired into these types of positions did not increase. 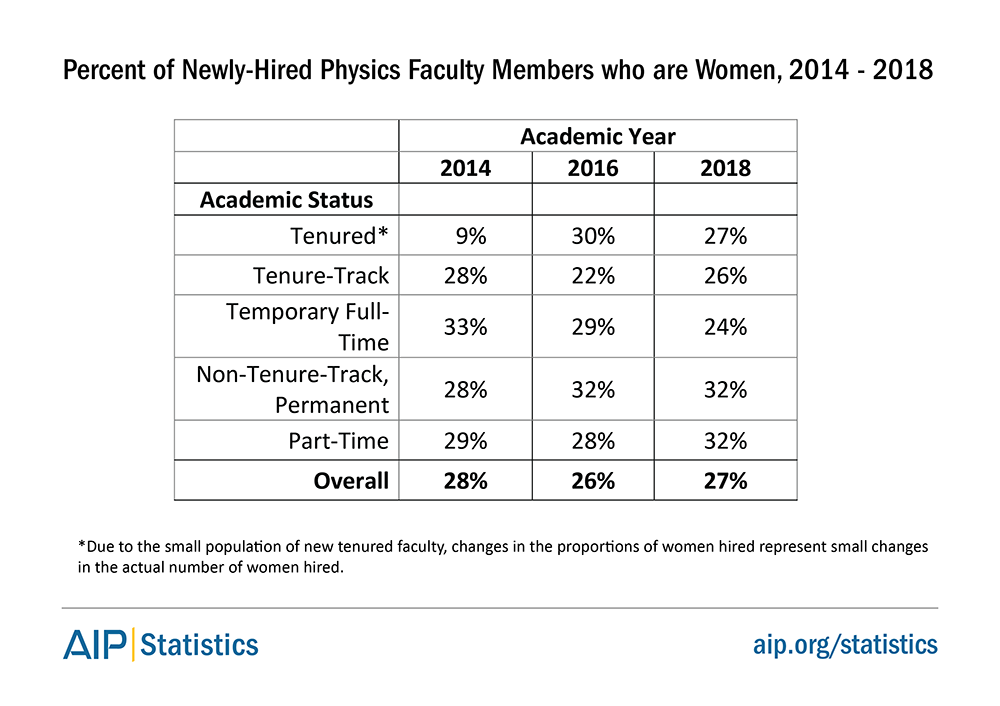 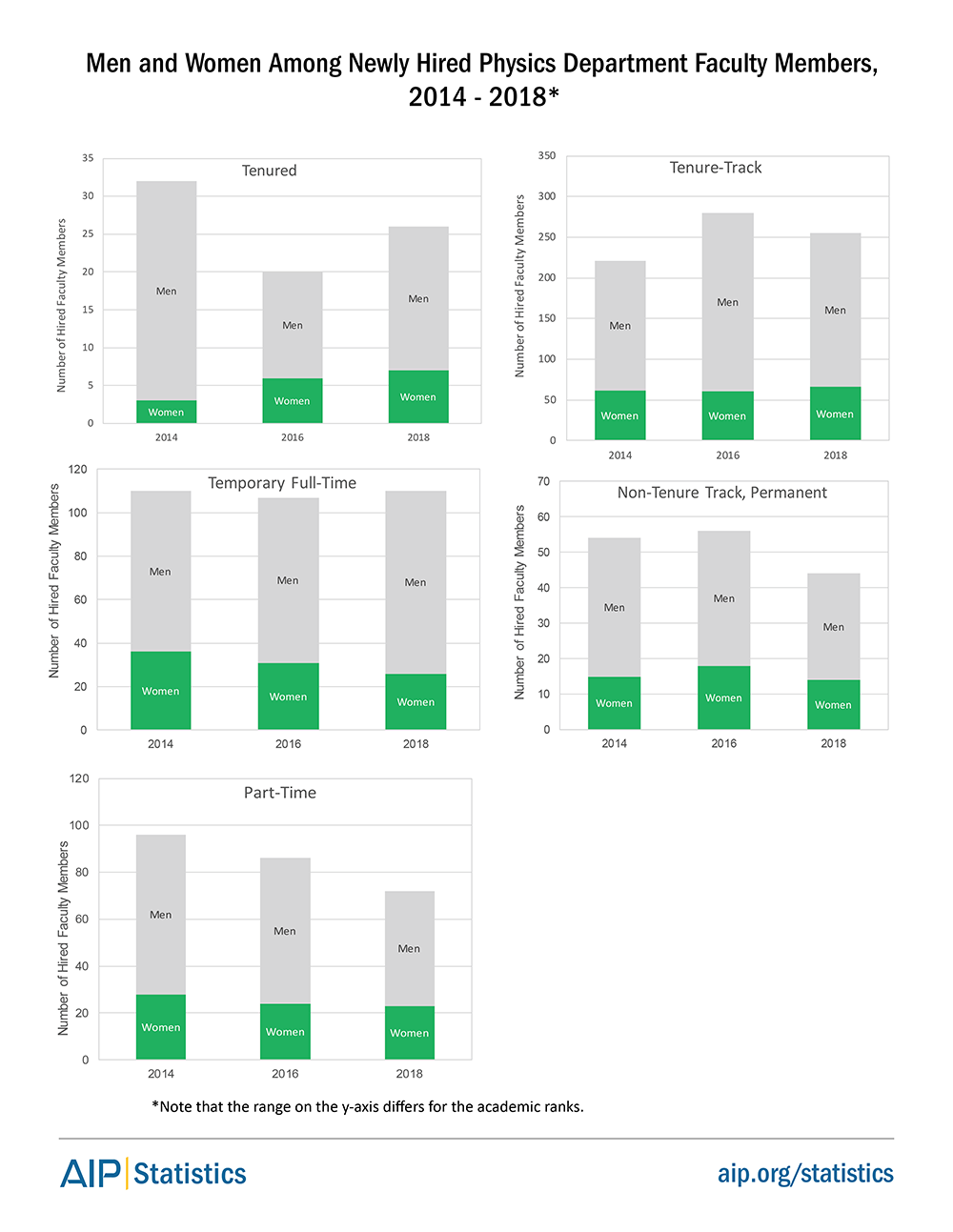 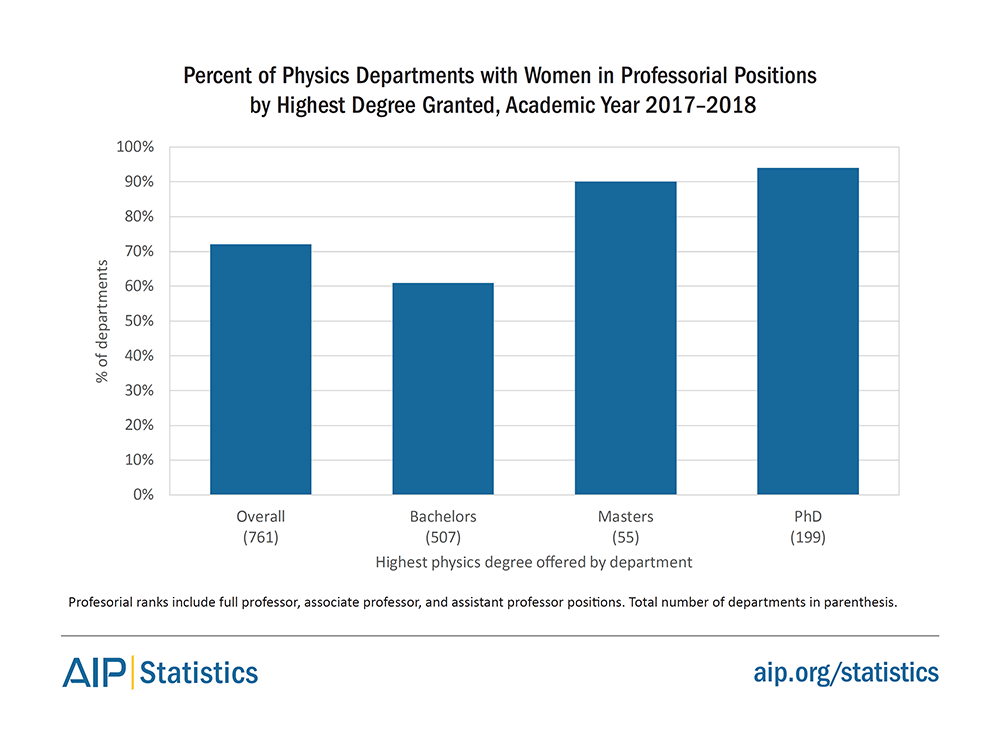 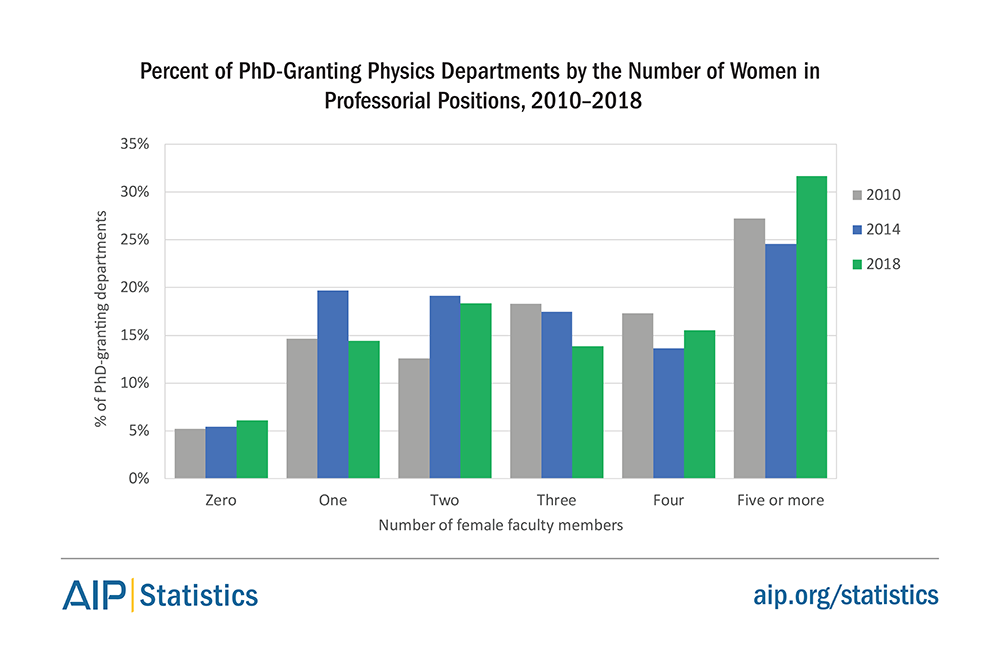 The overall representation of women in astronomy departments has increased over time (Table 3). In 2018, 23% of astronomy faculty were women compared to 19% in 2010 and 2014. At the full professor rank, there is a three-percentage point increase from 2014, while there is a drop of the same magnitude at the associate professor rank. But, at the assistant professor rank there is a very large increase in the proportion of women in the faculty, from 29% in 2014 to 41% in 2018. This represents an increase of 13 women faculty members at this rank. The similar increase in representation for women instructors or adjuncts, from 19% to 30%, does not reflect an increase in the number of women in that role but a significant drop in the number of men who are instructors or adjuncts. 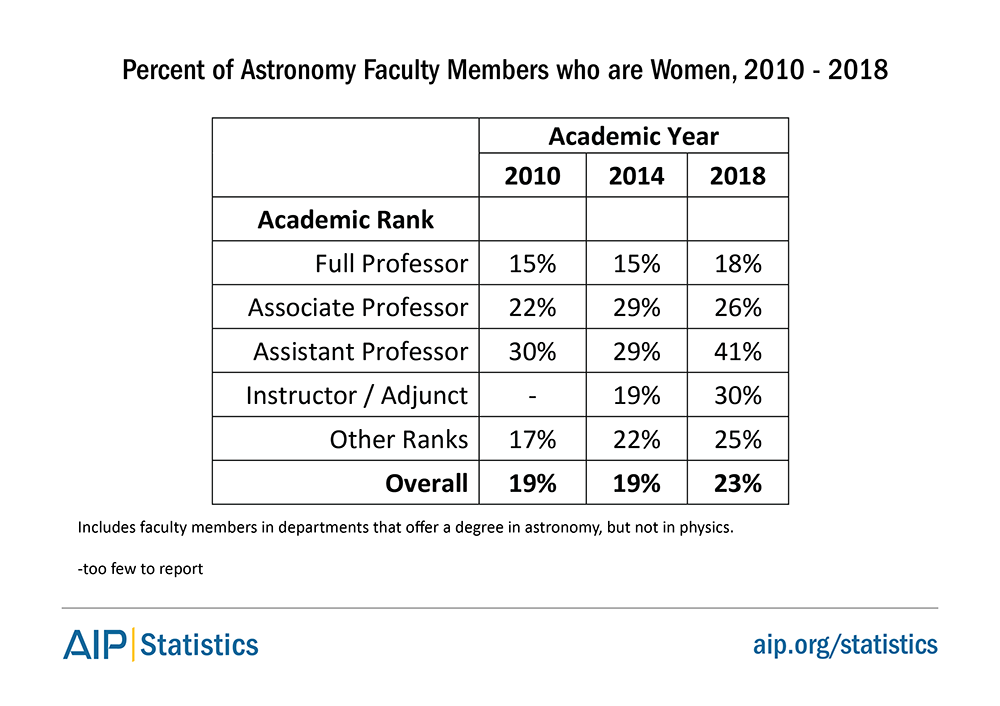 Porter, A. & Ivie, R. (2019). Women in Physics and Astronomy. Retrieved from https://www.aip.org/statistics/reports/women-physics-and-astronomy-2019#files

The Academic Workforce Survey has been conducted every two years since 1986. Between March and June 2018, we contacted 797 physics and astronomy departments (including 39 astronomy-only departments) that award a bachelor’s degree or higher in physics or astronomy. We send follow-up responses to those departments that do not respond. We received responses from 720 institutions, a 90% response rate. This Focus On series uses data from the 2018 Academic Workforce Survey, in addition to the 2014 and 2010 surveys.  This is due to the difference in data collected in each two-year cycle of the survey. We offer our sincere gratitude to the responding departments. Without your help, we could not track these data or provide them to the community.

You can sign up to receive e-mail alerts that notify you when we post a new report or resource. Visit www.aip.org/statistics/e_updates to sign up. We will send you an e-Update only when we post something new. You should receive no more than 20 messages in a year.