In the first-ever ten-year follow-up survey of physics PhD recipients, we contacted physics PhD recipients from the classes of 1996, 1997, 2000, and 2001 who were in the US during 2011. Among other things, we asked about the respondent’s first job and job at the time of the survey – their current job. (The first job is, by definition, the first job taken after any postdocs.) So, we have a snapshot of outcomes for these PhD physicists ten to fifteen years after they earned their doctorates.

As seen in Figure 1, there appears to be little movement across broad employment sectors between the first job and jobs ten to fifteen years later: most of those currently in a given job sector report that their first job was in that same sector. 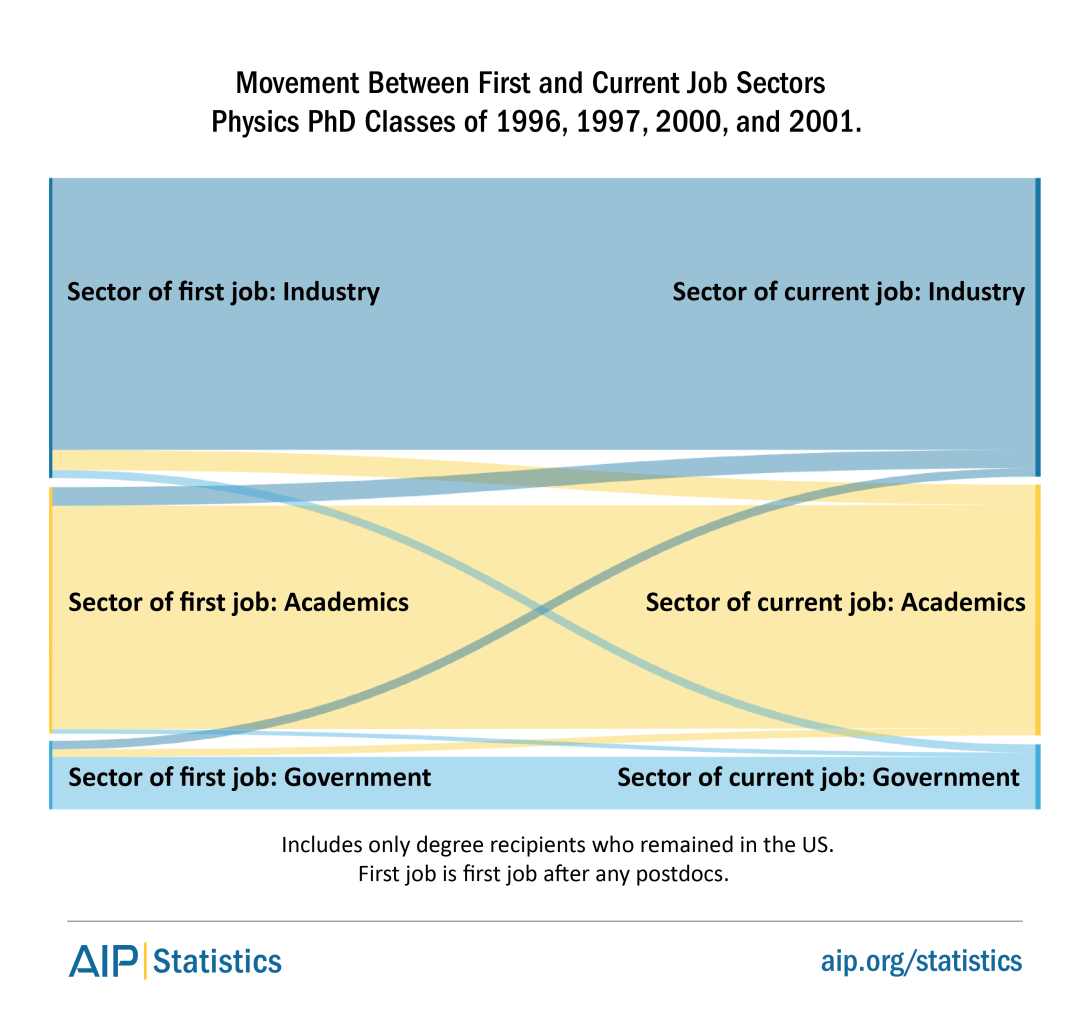 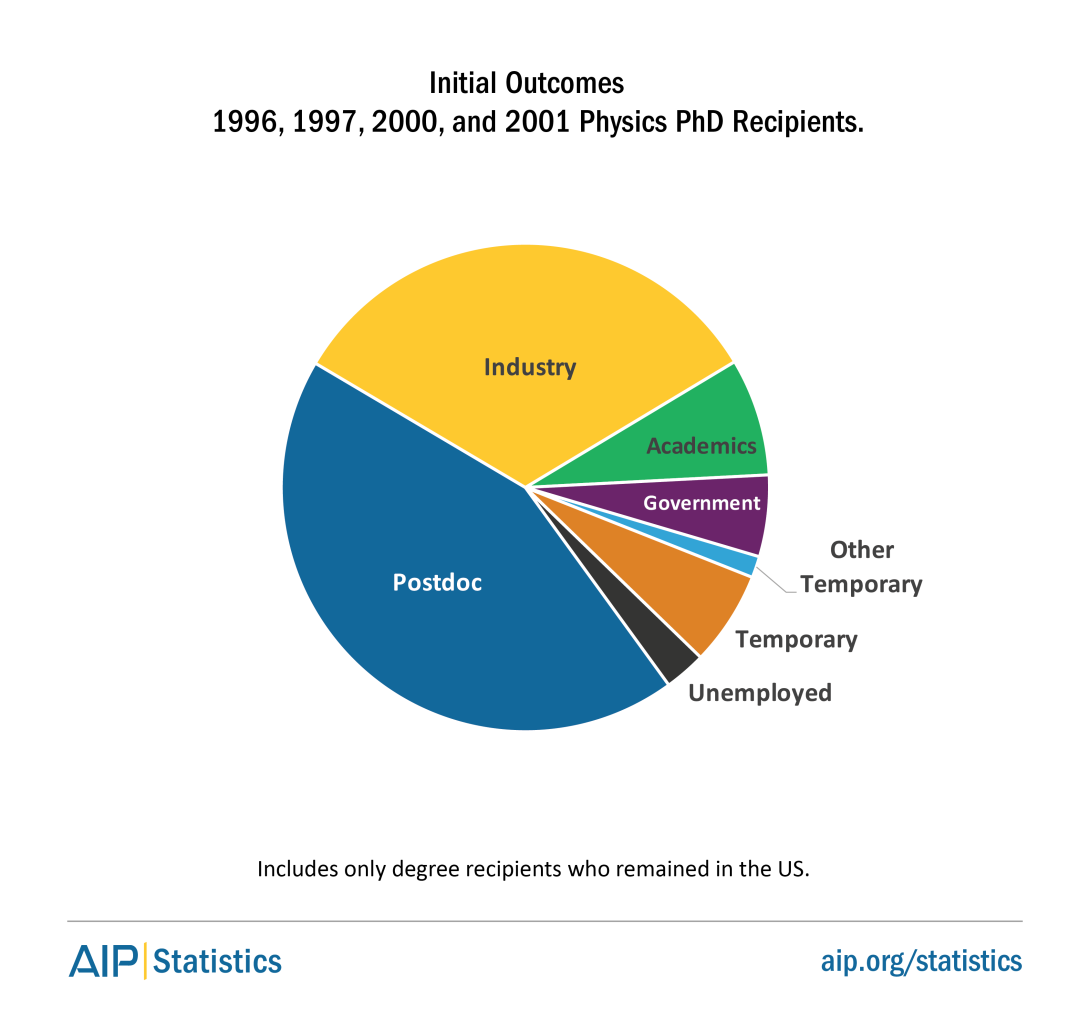 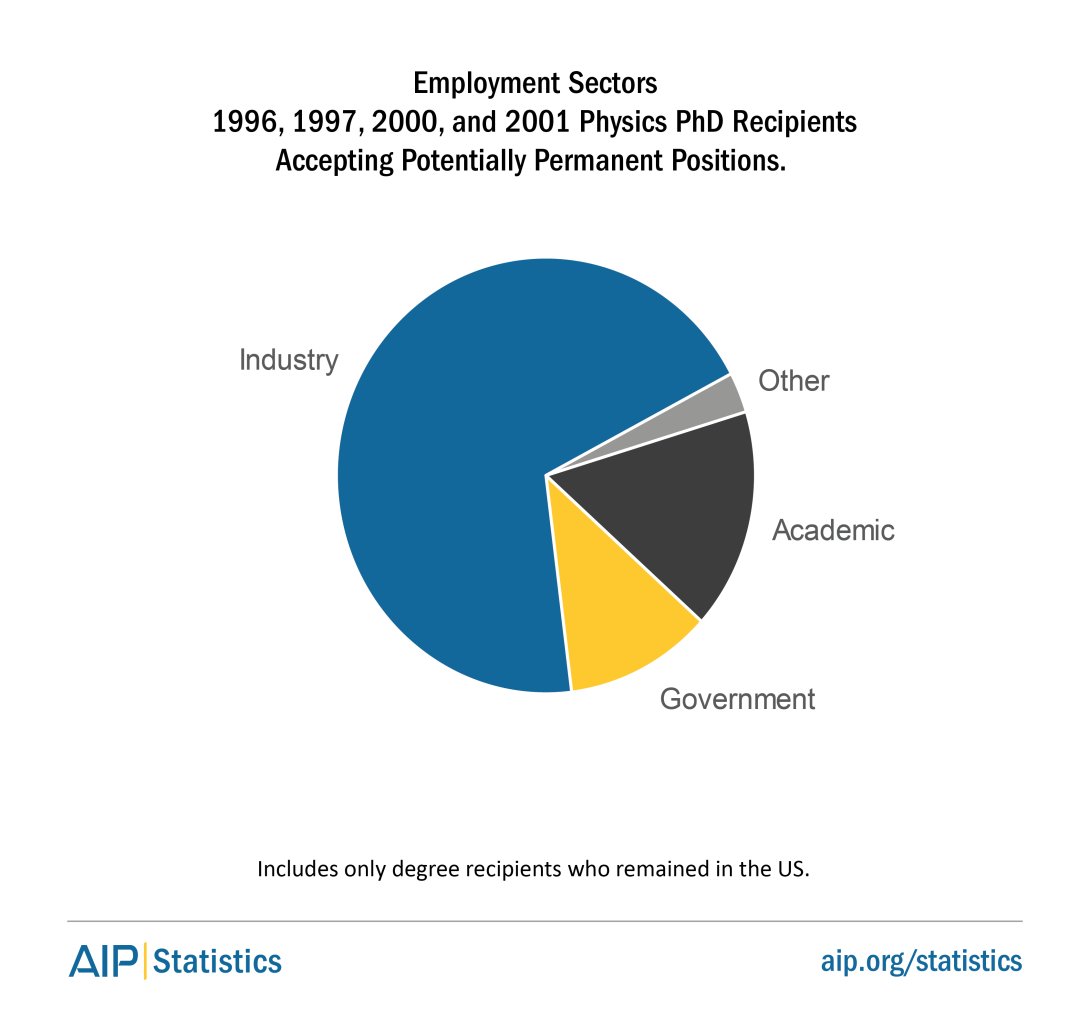 As seen in Figure 2, just over 40% of this cohort accepted a postdoc, about one in fourteen accepted a job in academics (which includes two-year colleges and university-affiliated research institutes), and about one in twenty were employed in government positions (which includes both state and federal). The overwhelming majority of those not taking a postdoc immediately after graduating found jobs in industry. (See Figure 3.) 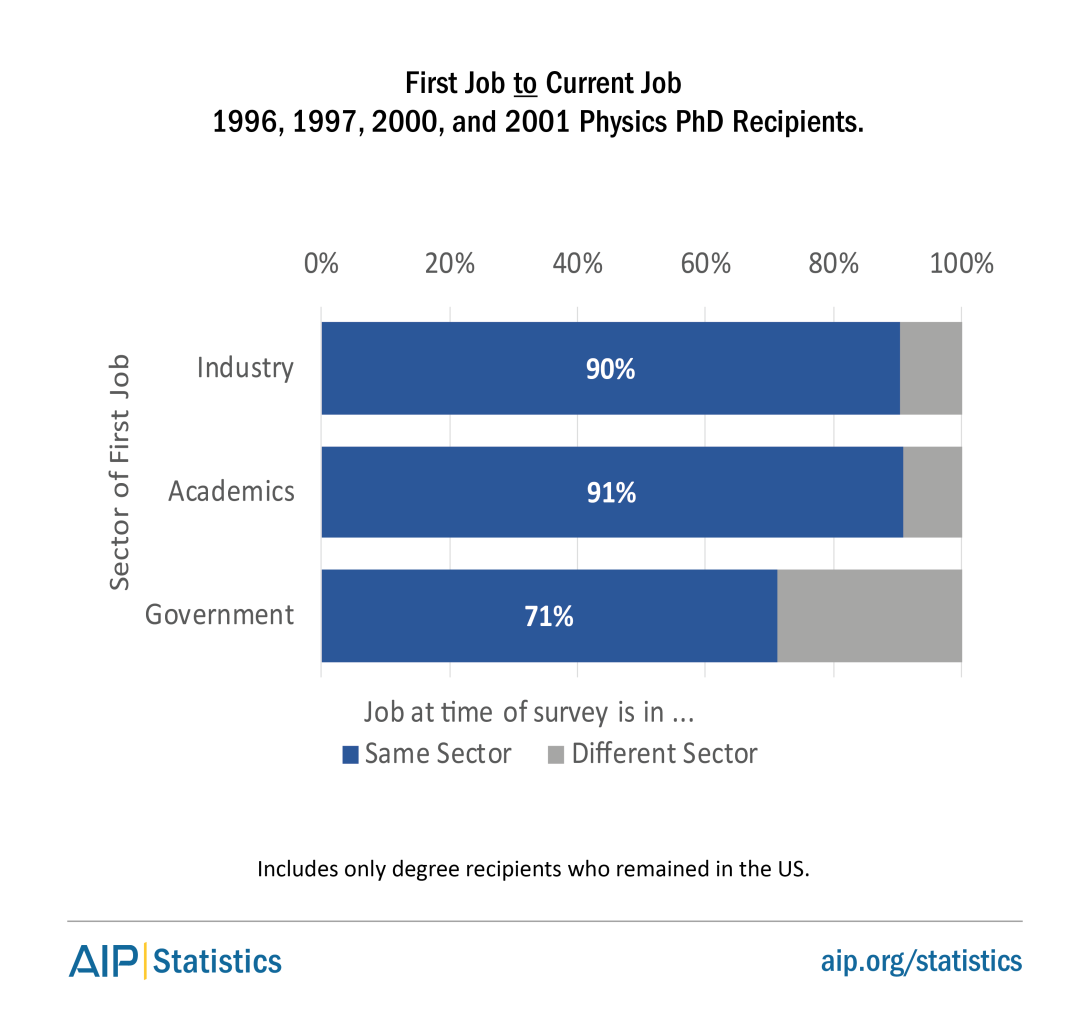 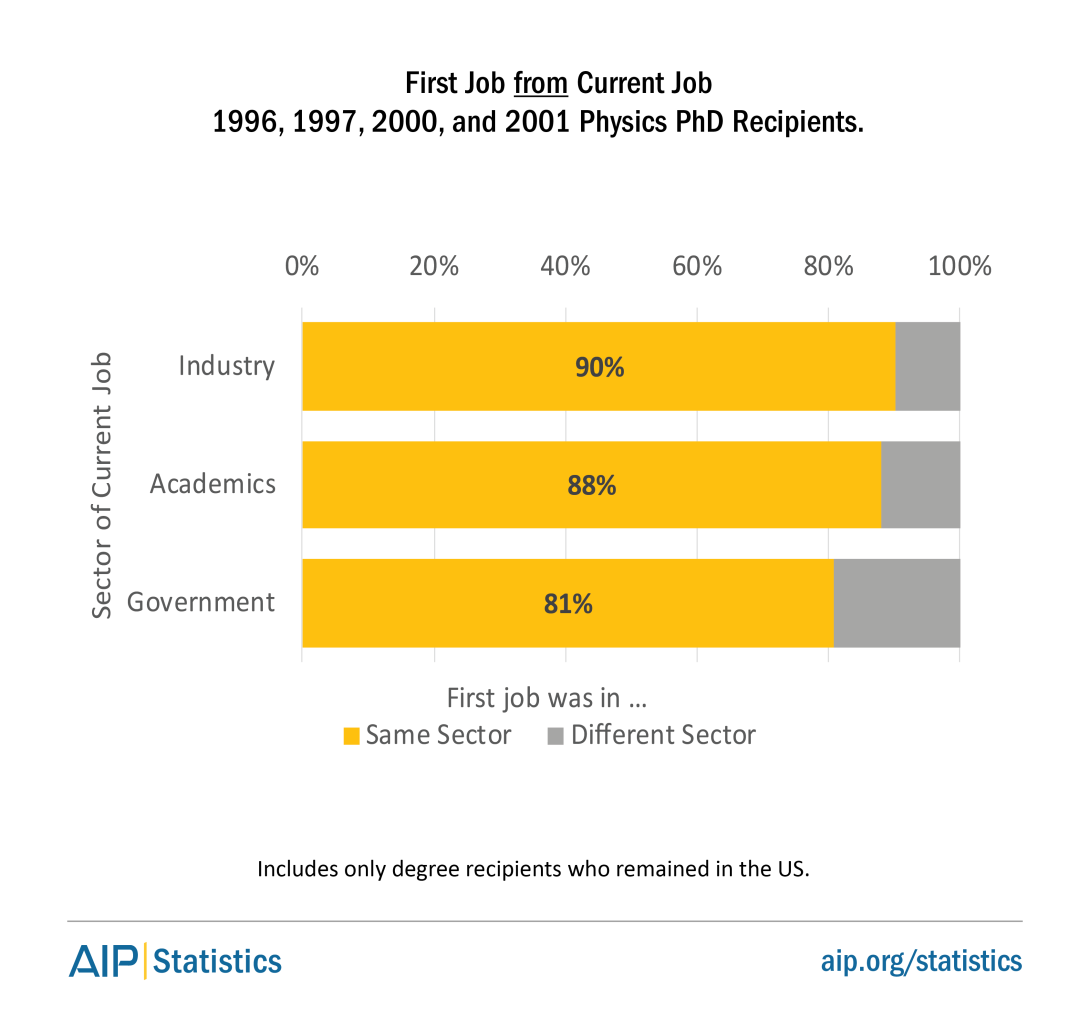 Does the Initial Employment Sector Matter?

How much movement is there across broad employment sectors for physics PhD recipients? Figures 1, 4 and 5 suggest there is very little. However, movement across employment sectors might differ for individuals who did (or did not) complete a postdoc, it might differ for those who are in different cohorts (1996 & 1997 or 2000 & 2001), and it might differ for men and women. Our data show that first job is related to taking a postdoc, with postdocs less likely to go into private sector jobs and more likely to go into academics. Will this difference persist across 10 to 15 years? There may be a cohort difference because there was an economic downturn around 2001, so graduates in the more recent cohort were looking for work in a less favorable economy. Finally, women are hired at greater than their availability rates for faculty jobs, so we know that gender affects initial employment.

We can test for statistically significant differences in outcomes for these factors using logistic regression. This technique is similar to ordinary least squares regression and is used when the dependent variable is binary. In this case, our dependent variable is whether or not the respondent’s current job is in a particular job sector. We estimate three different models: one for each of the broad employment sectors.

E[K] is a binary variable that indicates whether or not the respondent is currently employed in the sector of interest,

[EA, EG, EI, EO] are binary variables that indicate the respondent’s initial employment sector; (only three are used in a particular model; E[K] is excluded),

postdoc is a binary variable indicating whether or not the respondent completed a postdoc,

cohort is a binary variable indicating the cohort with which the respondent graduated (1996/97 or 2000/01), and

gender is a binary variable indicates whether the respondent identified as female or male.

We have data from 1,386 respondents, most of whom are mid-career since they are ten to fifteen years removed from earning their PhDs. As noted, we analyze three separate models: one for current employment in each of the three broad employment sectors. In our results, statistical significance is indicated by the p-values shown in the tables. A p-value is a measure of whether the estimated value is signficantly different from the null hypothesis. In our tests, our null hypothesis is that the initial job sector makes no difference in the sector of current job, controlling for gender, cohort and taking a postdoc. The alternative hypothesis is that there is a difference. A p-value ranges between 0 and 1, and a smaller p-value indicates stronger evidence to reject the null hypothesis.

The results are shown in Table 1. They indicate the relative likelihood of one outcome as compared to another. If a factor has no statistically significant impact on the current employment sector, then the outcome is equally likely regardless of the factor (whether or not the respondent completed a postdoc, for example). 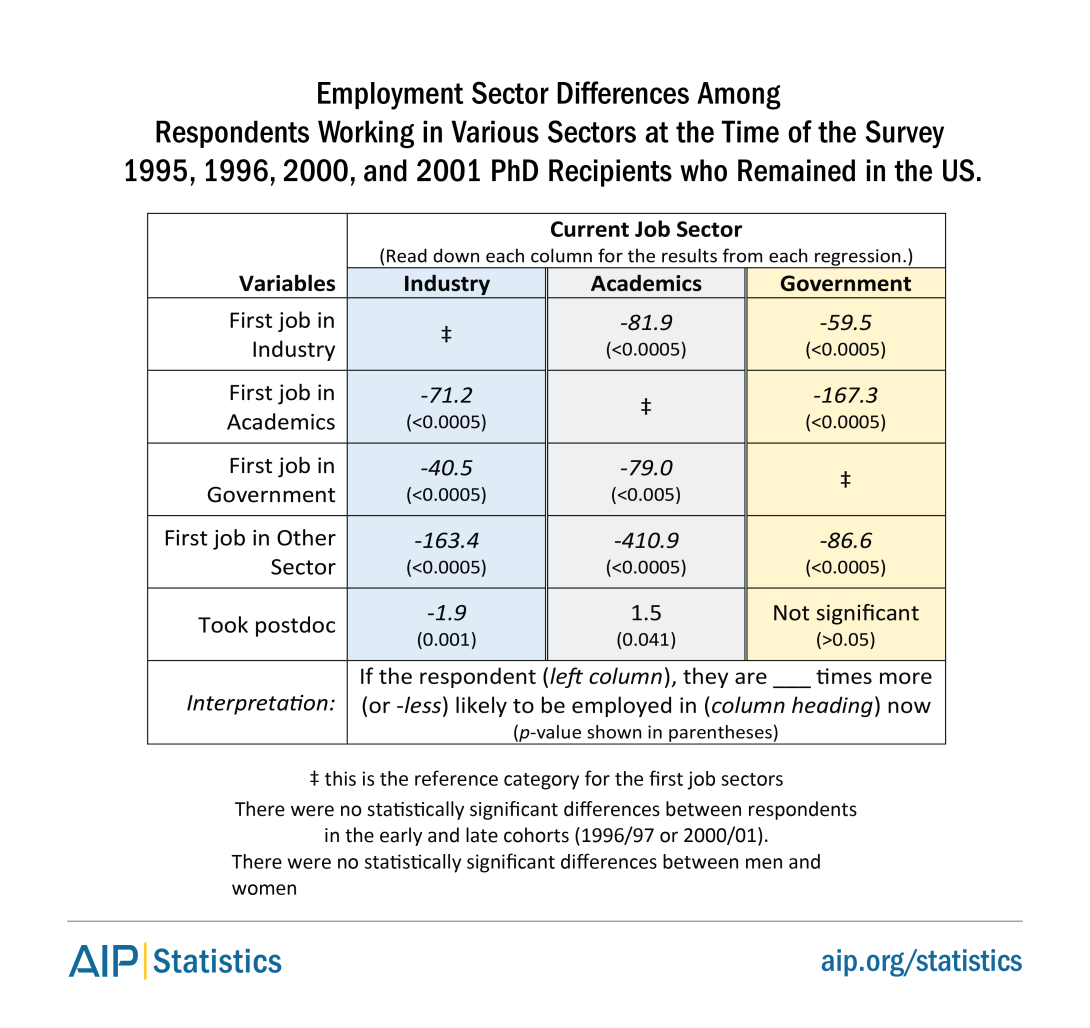 The data suggest that the employment sector of the first job a physics PhD recipient takes affects his or her employment sector ten to fifteen years later. While our data are not necessarily representative of all physics PhDs (See Survey Methodology, below.), the p-values are small enough to suggest that the likelihood of moving across job sectors is low. Of course, these data are taken from PhD recipients in the classes of 1996, 1997, 2000, and 2001. Graduates from later classes will not necessarily experience the same economic circumstances, and their job experiences may differ.

We know that the respondents are not representative. It was easier to find members of the more recent classes than the earlier classes, and, based on an analysis of the respondents by contact wave, we believe that it was harder to contact individuals employed in industry than those in academics or the government. So, academics are over-represented among our respondents.

For a complete overview of the methodology, please see the Appendix in Common Careers of Physicists in the Private Sector by Roman Czujko and Garrett Anderson. This report is available online here (or at https://www.aip.org/statistics/reports/common-careers-physicists-private...).

[1] We found 4,402 email or postal addresses (1) for names that appeared to match the names we were looking for and (2) that did not result in bounced email messages or returned letters. We cannot be sure that we actually contacted all 4,402.