Results from the 2018 Survey of Enrollments and Degrees

This report presents findings from the annual AIP survey of Enrollments and Degrees.  The trend data detailed in this focus on include bachelor's degrees from the class of 2018.  It includes data on women and other underrepresented groups. It lists which departments, on average, confer the most physics bachelors. 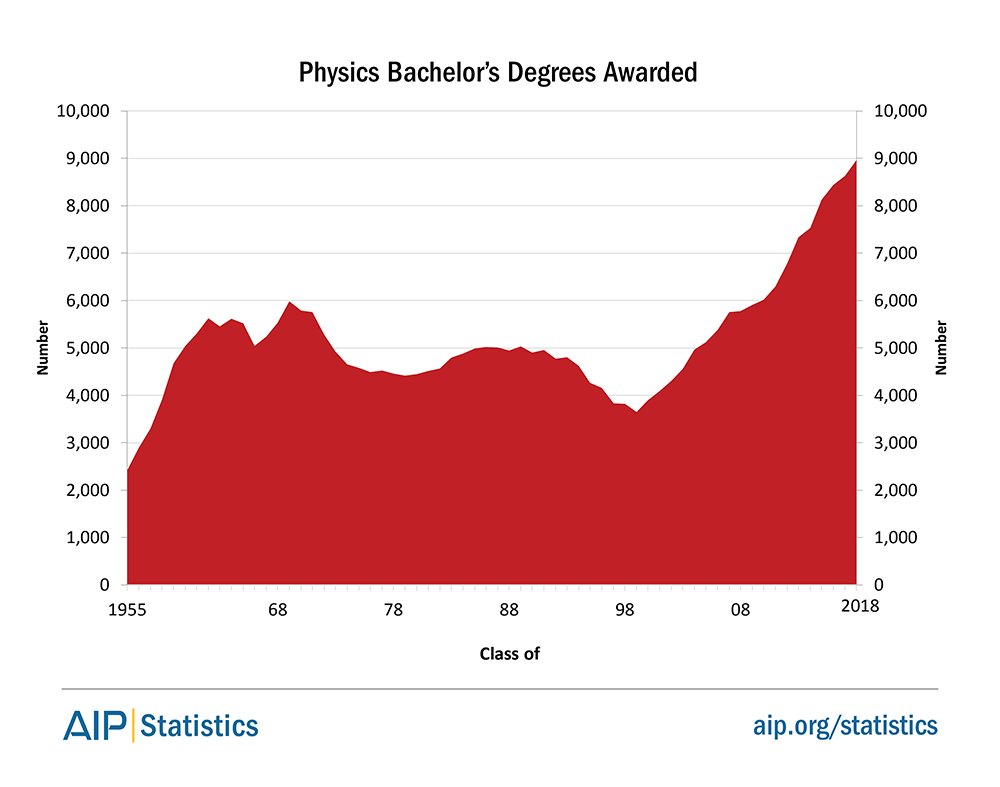 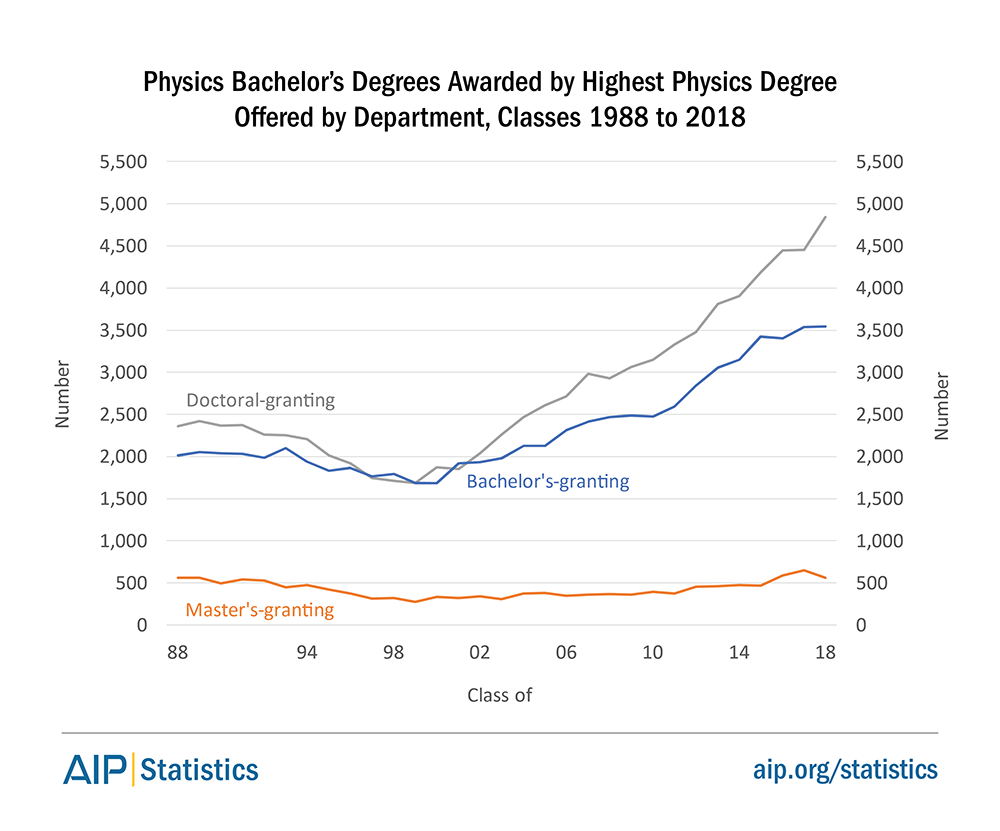 The trend of increases in the number of degrees conferred has not been limited to only physics bachelors. STEM (science, technology, engineering, and mathematics) degrees have been increasing for an even longer period of time, since 1992 (see Figure 3). The number of physics degrees conferred since 1999 has increased 145%, while the overall number of STEM degrees has increased about 80% during the same time period. The total number of bachelor’s degrees awarded across all subjects has also been on the rise and has increased an estimated 65% since 1999. Physics bachelor’s degrees represented about 1.8% of STEM degrees in the 1998–99 academic year and have increased their representation to 2.3% in the class of 2018. Among all bachelor’s degrees in the class of 1999, 0.3% were awarded in physics.  For the class of 2018 this was 0.46%, a 50% increase. 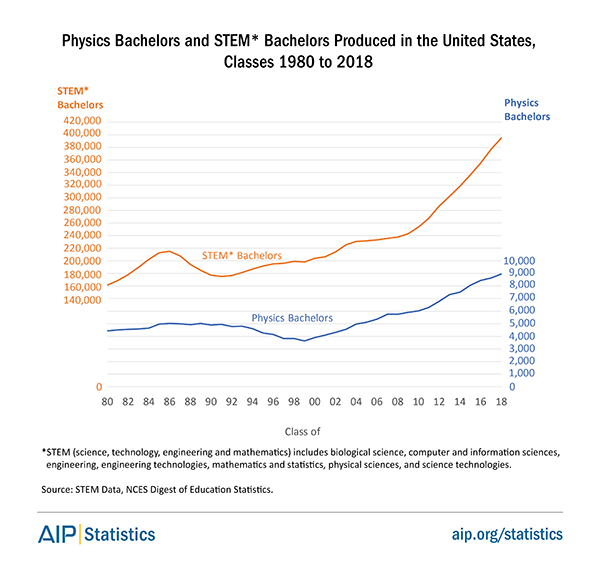 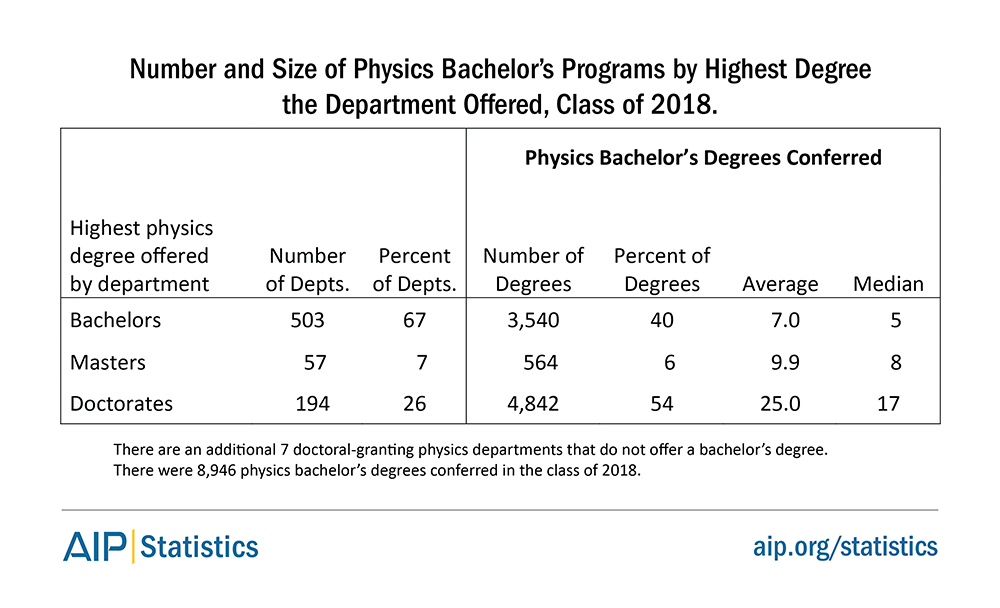 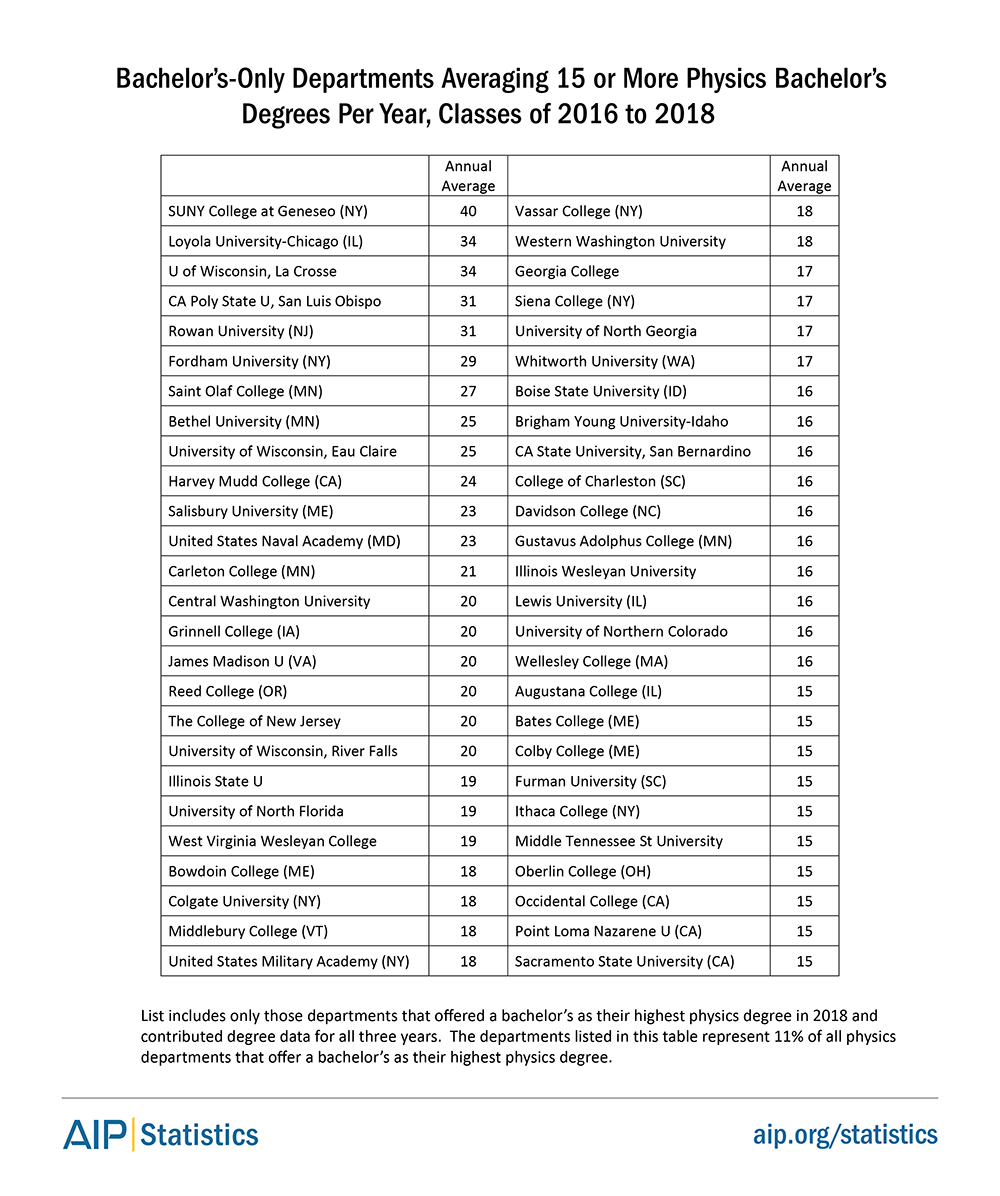 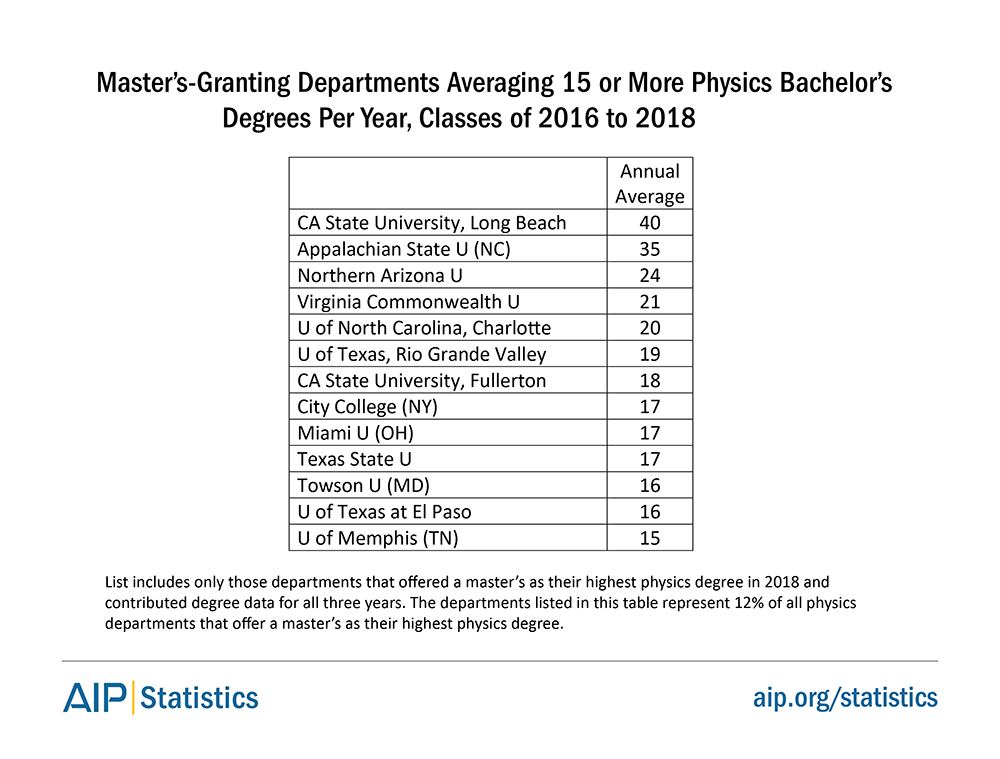 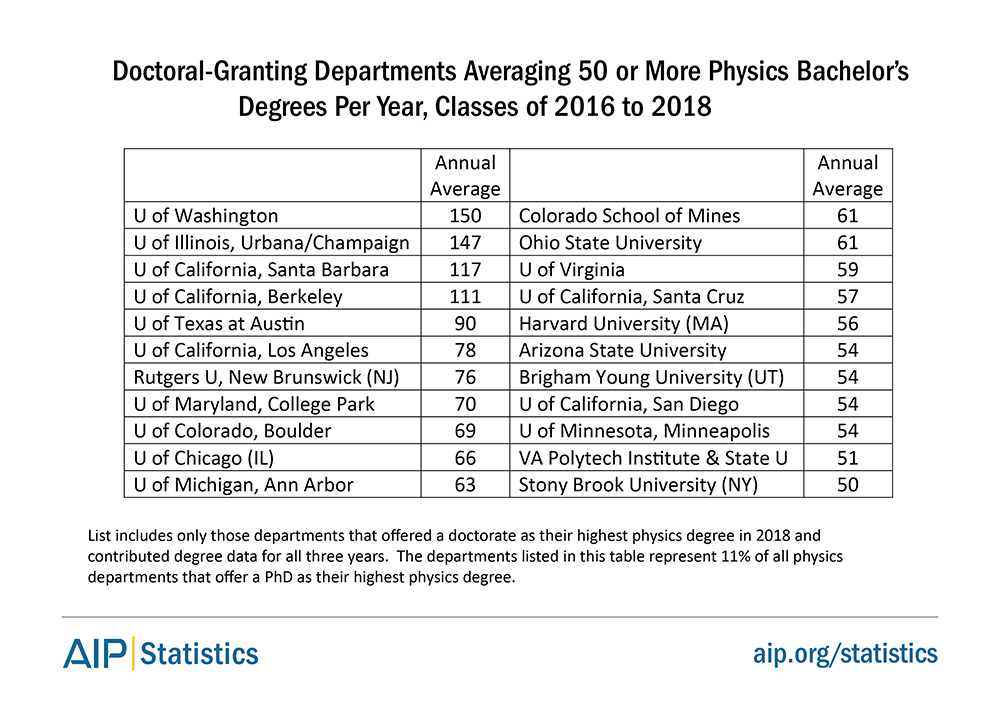 The median age for physics bachelors is 22.4 (see Table 5). Sixteen percent of physics bachelors were 24 years old or older; this compares to 35.8% of all first-time bachelor’s degree recipients in 2015–16 [4].

The class of 2018 represents the third consecutive year there has been a gain in the representation of women among physics bachelors. The proportion of women in the class of 2018 (22%) has almost returned to the all-time high level (23%) seen in the early 2000s (see Figure 4).  Data from the AIP Degree Recipient Follow-up Survey, classes of 2017 and 2018 combined, finds that about 1% of physics bachelor’s identified themselves in a gender category other than a man or a woman. 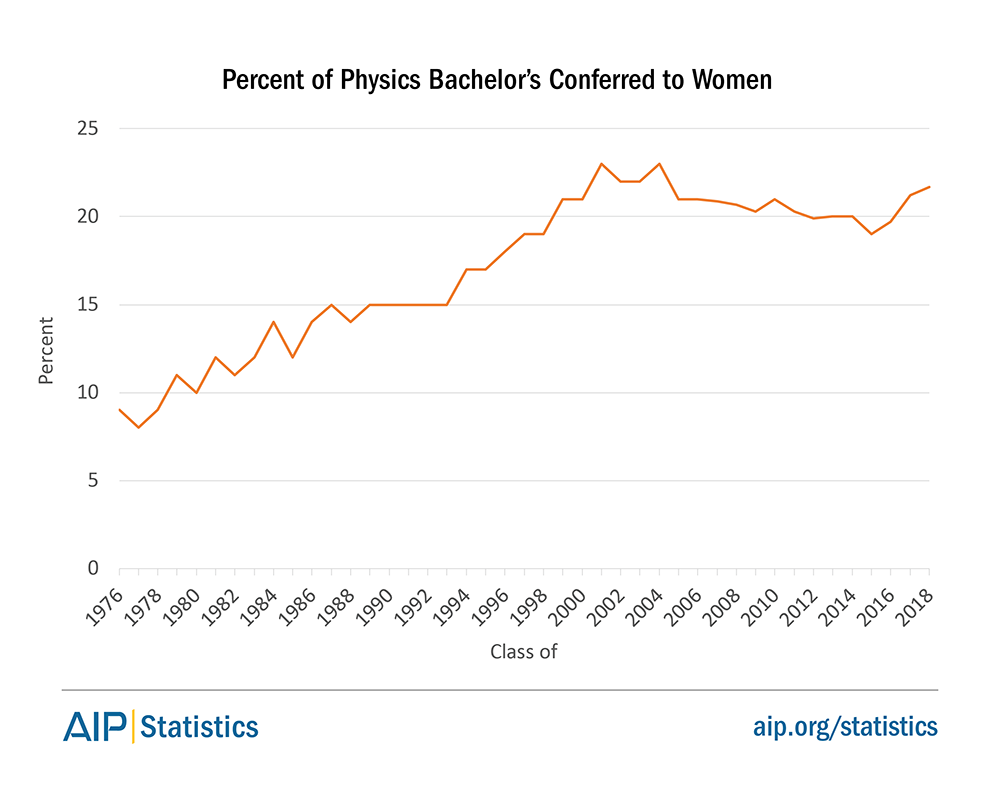 Many undergraduate physics programs offer their students the option to choose a particular focus to their physics major. In the combined classes of 2017 and 2018, 30% of the physics bachelors indicated their degree had a particular focus (see Table 6). An engineering or applied physics focus was cited most frequently, with 13% of the bachelors having graduated with such a focus to their degree. 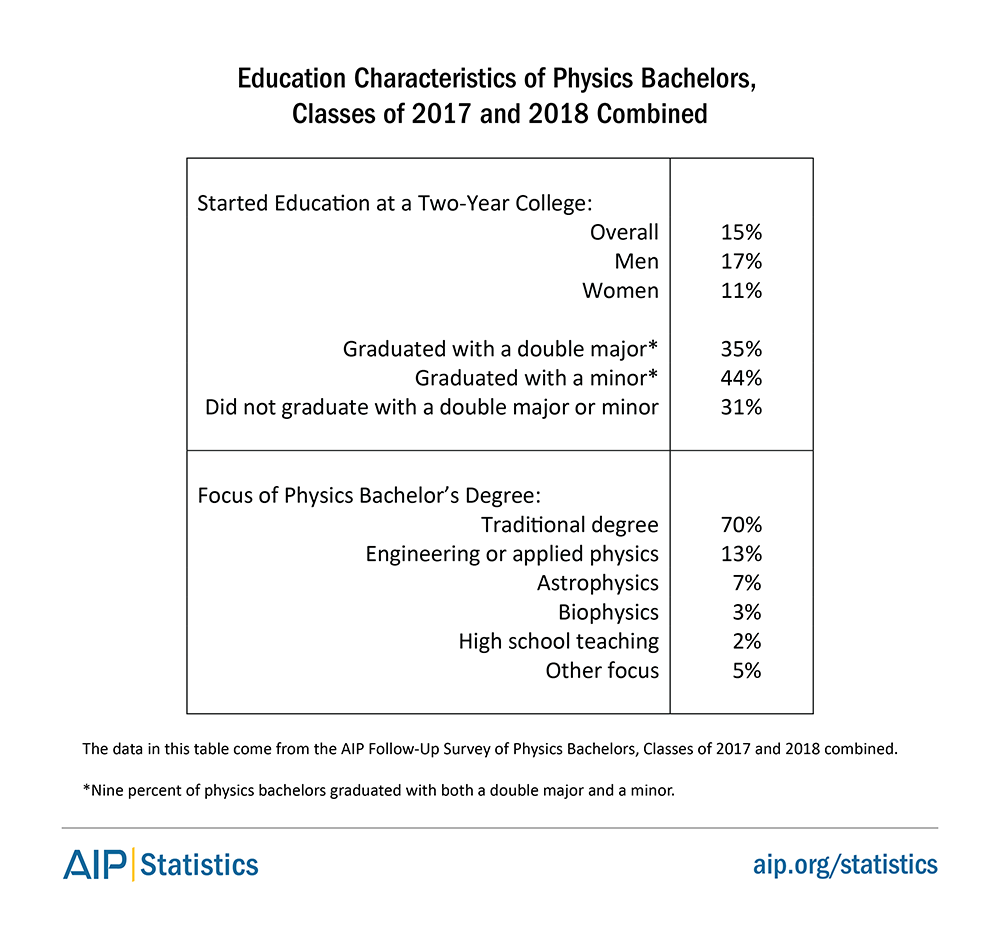 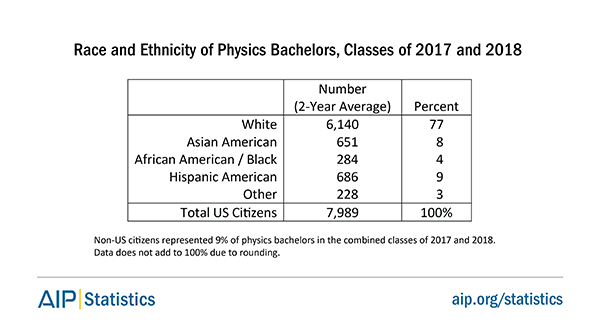 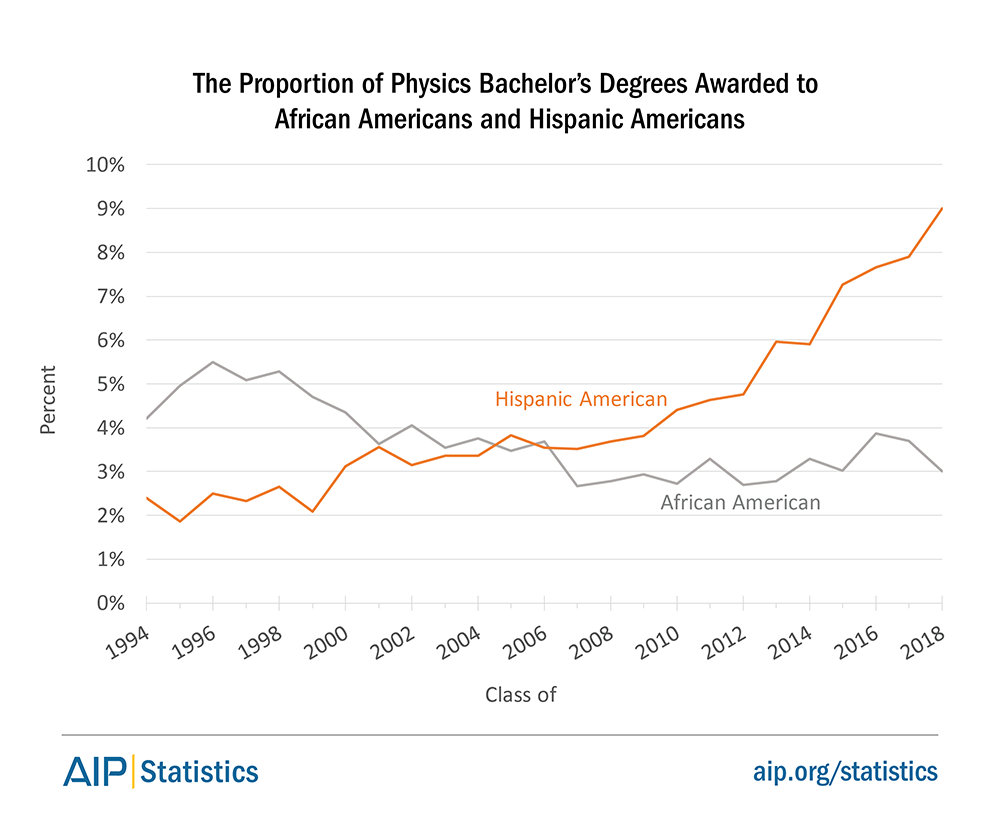 The American Institute of Physics has published a report, “The Time Is Now: Systemic Changes to Increase African Americans with Bachelor’s Degrees in Physics and Astronomy” which discusses the reasons for low representation of African Americans in undergraduate physics and provides actionable recommendations for community wide efforts to reverse this trend. https://www.aip.org/diversity-initiatives/team-up-task-force

After over two decades of increases in the number of students enrolling in introductory physics classes at degree-granting physics departments, the number has decreased by about 4% in the last two years. The greatest declines have occurred in calculus-based physics classes. 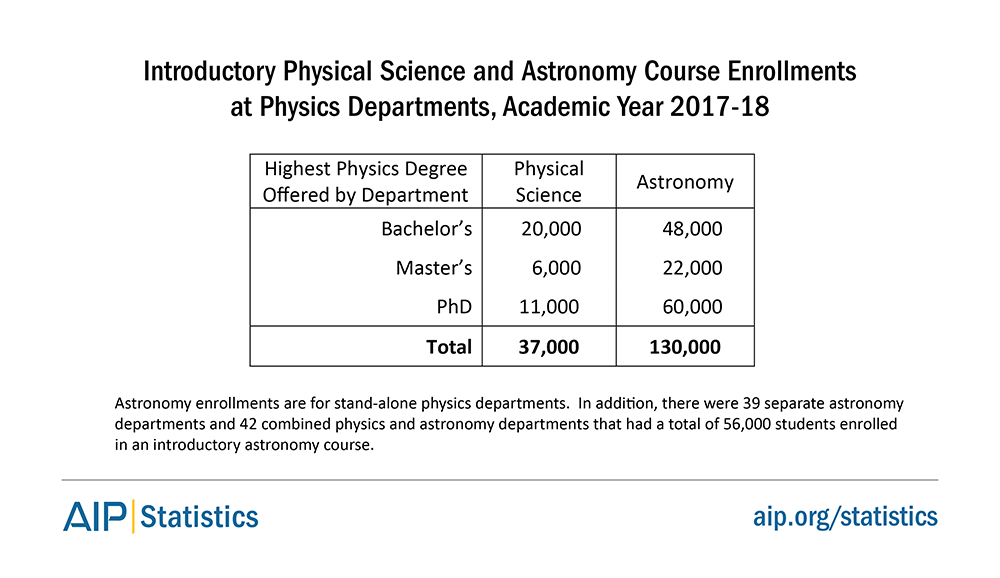 After steadily increasing for many years, undergraduate junior and senior physics major enrollments have leveled off (see Figure 6). It can be expected that a leveling off of the number of physics bachelor’s degrees awarded annually will happen soon.

In recent years, approximately four out of ten physics seniors maintained senior status for more than one year. Many factors contribute to why physics students might require more than four years to obtain their undergraduate degree, including taking additional course work for a double major, changing majors, taking a leave of absence, holding employment while enrolled part time, and transferring from another institution. 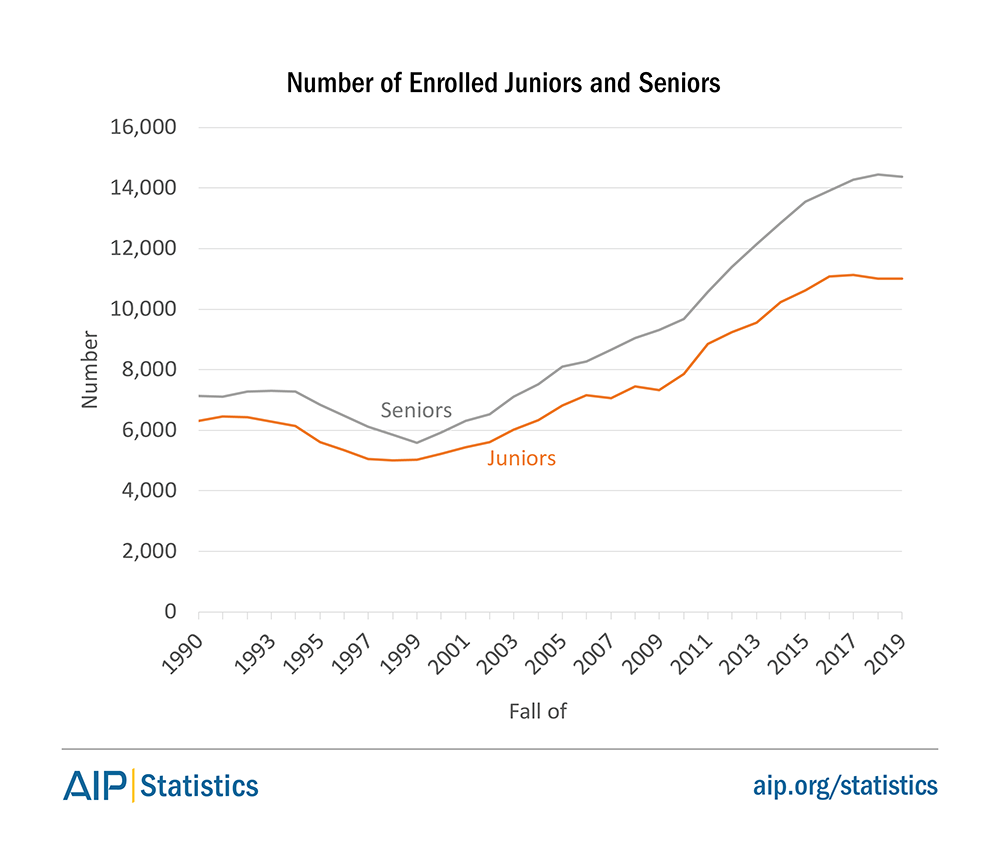 The American institute of physics has published a report “The Time Is Now: Systemic Changes to Increase African Americans with Bachelor’s Degrees in Physics and Astronomy” which discusses the reasons for low representation of African Americans in undergraduate physics and provides actionable recommendations for community wide efforts to reverse this trend. https://www.aip.org/diversity-initiatives/team-up-task-force

[6] National Center for Education Statistics, Status and Trends in the Education of Racial and Ethnic Groups, Fig. 1.4. https://nces.ed.gov/programs/raceindicators/indicator_RAA.asp

Each fall the Statistical Research Center (SRC) conducts its Survey of Enrollments and Degrees. The survey is sent to all degree-granting physics and astronomy departments in the United States and Puerto Rico. Departments are asked to provide information concerning the number of students they currently have enrolled and the number of degrees they conferred in the previous academic year. We define the academic year as being from September to August.

In the 2017–18 academic year, 753 departments offered bachelor’s degrees in physics. We received responses from 90% of these departments. For non-responding departments, we estimated numbers and included them in the totals

Data from this survey are also used to produce the “Roster of Physics Departments,” which provides a department-level enrollment and degree snapshot. A copy of the roster can be found at https://www.aip.org/statistics/reports/roster-physics-2018.

The SRC also conducts an annual follow-up survey of new physics bachelor’s degree recipients in the year after they receive their degrees.  Some of the data in Table 5 and all the data in Table 6 come from that survey. We received degree recipient responses from approximately 25% of the known number of physics bachelors in the classes of 2017 and 2018.

These reports are possible because of the efforts of department chairs, faculty, and staff in providing their departmental data to AIP year after year. We thank them for their ongoing support of this survey series.