This Focus On outlines the variety of skills used by new physics PhDs in the different types of employment they held following the receipt of their degrees.  It also includes an examination of how new PhDs perceived different aspects of their first post-degree position.  It looks at subjective measures such as job satisfaction, feelings of underemployment, and the helpfulness of career planning advice. New PhDs holding a postdoctoral appointment (postdoc) were specifically asked about their postdoc-related experiences. Lastly, respondents were asked to reflect on the larger retrospective picture of acquiring a physics PhD.

The findings in this report come from the annual AIP degree recipient follow-up survey. This is the third and final Focus On in a series discussing the post degree outcomes of physics PhDs from the classes of 2015 and 2016.

By the time physics students receive their PhDs, they have a broad understanding of many areas of physics and in-depth knowledge in a specific subfield. They have developed a comprehensive knowledge of mathematics, modeling, and programming. Graduate students in physics also develop skills in areas not specifically related to physics and not explicitly associated with research. These include how to work on a team, manage projects, and technical writing. This Focus On will look at the knowledge and skills used by new physics PhDs in the first positions they held after receiving their degrees.

This Focus On will also look at how new PhDs perceive the subjective aspects of their first post-degree position. To this end, degree recipients were asked to self-assess different elements of their employment, such as their satisfaction with their position and whether they found it professionally challenging. New PhDs holding a postdoctoral appointment (postdoc) were specifically asked about their postdoc-related experiences. Lastly, respondents were asked to reflect on the larger retrospective picture of acquiring a PhD.

Almost half (47%) of physics PhD recipients in the combined classes of 2015 and 2016 held a postdoc in the winter following the year they received their PhDs (see Figure 1). Postdocs are temporary positions with a defined period of mentored training in research where individuals acquire professional skills and research independence. A similar proportion (40%) of the new PhDs were working in potentially permanent positions. The least common initial post-degree employment category was holding another temporary position (7%); these positions are similar to postdocs in that they have a specified ending date and tend to be concentrated in academic settings but are typically more focused on teaching. The skills used by the relatively small group of PhDs holding other temporary positions will not be addressed in this Focus On; however, they are included in the tables concerning satisfaction. A relatively small group of PhDs (6%) indicated that they were unemployed and seeking employment in the winter after receiving their degrees.

While this report examine skills and satisfaction, Initial outcome and employment data for new PhDs from the classes of 2015 and 2016  is more fully explored in other SRC publications, visit https://www.aip.org/statistics/employment/phds 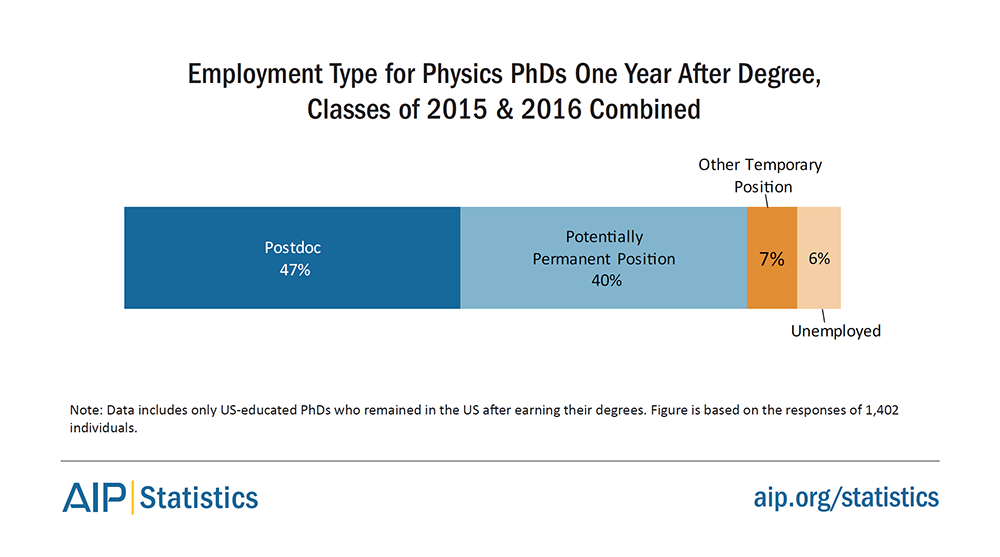 Regardless of the type of employment physics PhDs hold, there are a variety of skills and expertise that are needed in order to be successful. We classify these skills into one of two broad categories: “interpersonal and management” or “scientific and technical.” Interpersonal and management skills are often crucial to being successful in the workplace; typically these skills are not explicitly taught as part of physics PhD curricula. Instead, they are developed as students works toward a PhD. Scientific and technical skills may vary somewhat by specific subfield of study but are universally acquired by physics PhD students during the course of their studies.

Figures 2 and 3 compare new PhDs who are working in temporary postdoctoral fellowships (postdocs) with those who accepted potentially permanent positions in academia (academically employed). Seventy-five percent of the new PhDs holding postdocs were employed at a university, with almost all the remaining postdocs employed by the government or government agencies. The PhDs working in potentially permanent positions in academia were at a mix of institution types, including community colleges, four-year institutions, universities, and university-affiliated research institutes (UARIs). With the exception of the UARIs, teaching was the primary role for the academically employed. About a third of these academically employed PhDs indicated they were working in a department other than physics or astronomy, with mathematics, engineering and general science departments being the most frequently cited.

Figure 2 illustrates the frequency of use of interpersonal and management skills for postdocs and the PhDs who accepted potentially permanent positions in academia. The vast majority of people in both employment types indicated their responsibilities regularly involved working on a team. Technical writing, managing projects, and speaking publicly were skills that were used at least monthly for both the majority of postdocs and the academically employed. The postdoc holders were considerably more likely to manage people than the academically employed. Considering the difference in the type of work, it is not surprising that the academically employed were more likely to have teaching responsibilities and to manage budgets than individuals holding postdocs. 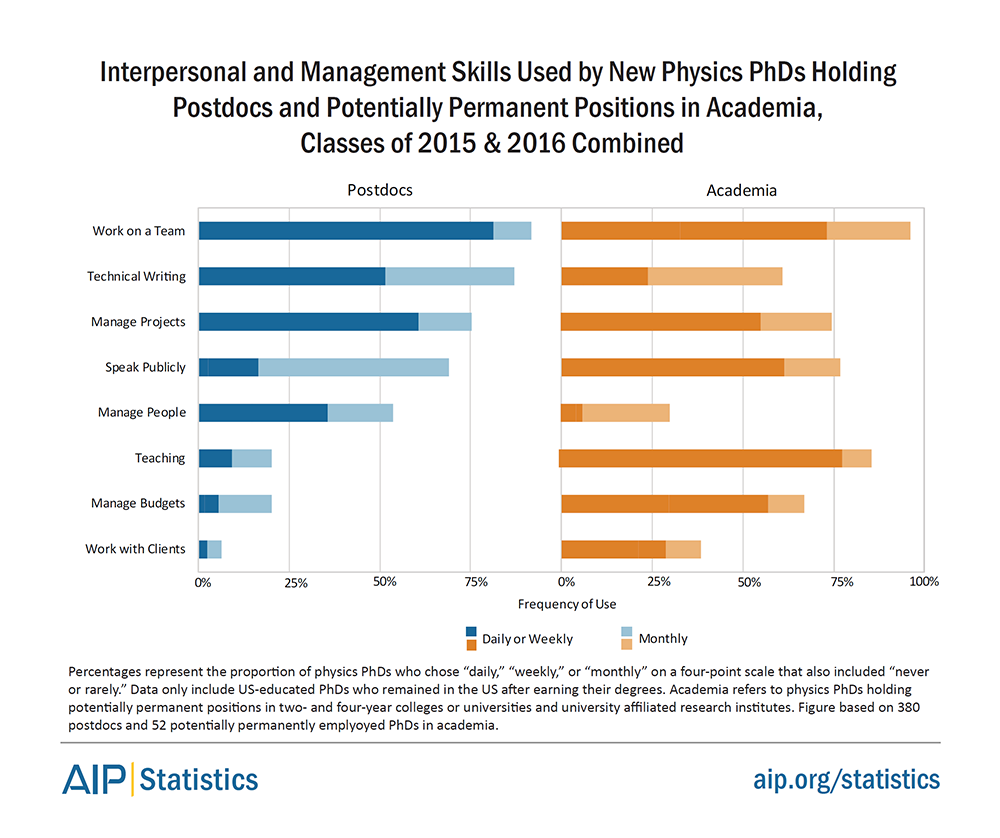 PhDs in postdocs were more likely than PhDs holding potentially permanent academic positions to be utilizing their scientific and technical skills (see Figure 3). Postdoc holders are typically involved in research requiring them to regularly use and improve upon the scientific and technical skills that they acquired while studying as graduate students. New physics PhDs holding potentially permanent academic positions were primarily employed at universities, four- and two-year colleges, and high schools where a greater emphasis is placed on teaching. 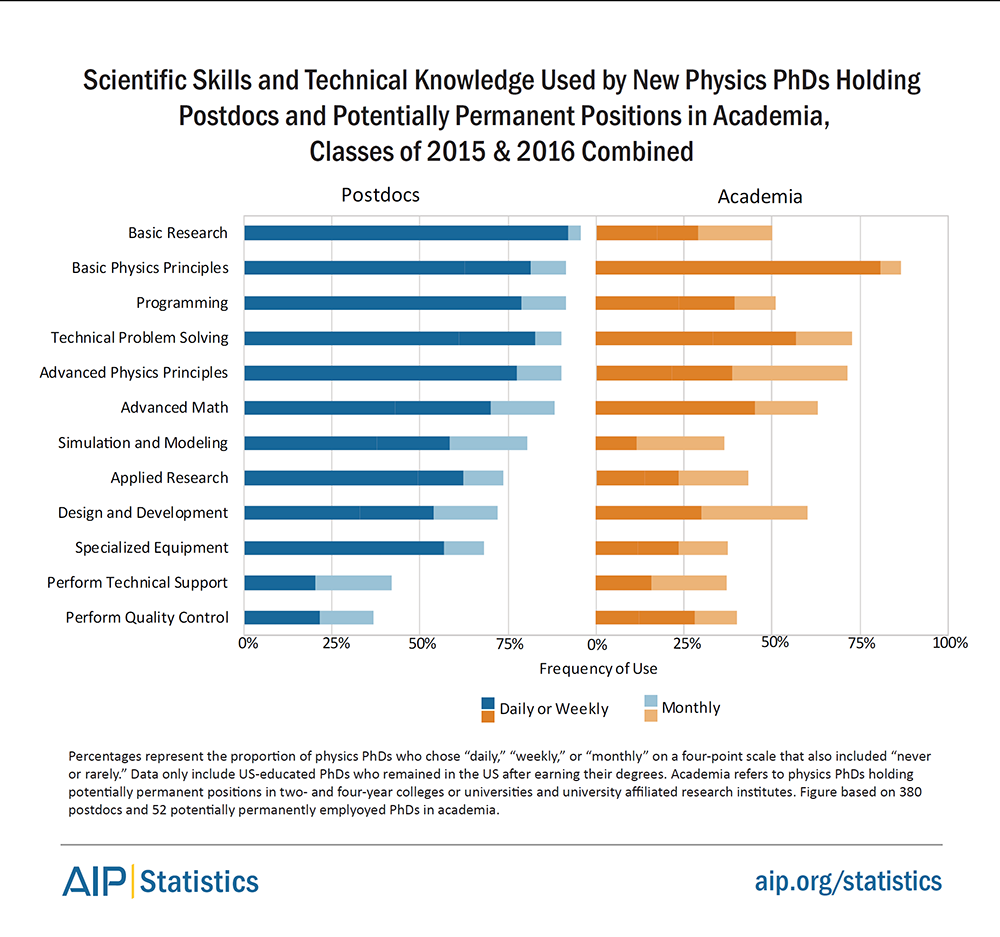 Among the interpersonal and management skills used by new physics PhDs employed in potentially permanent positions, teamwork is the most frequently used skill followed by technical writing (see Figure 4). If we consider only daily or weekly usage, managing projects ranks higher in usage than technical writing among PhDs, regardless of field of employment. Although public speaking was a skill that was used at least monthly by over half of the PhDs, a relatively smaller proportion indicated that those skills were used on a daily or weekly basis. 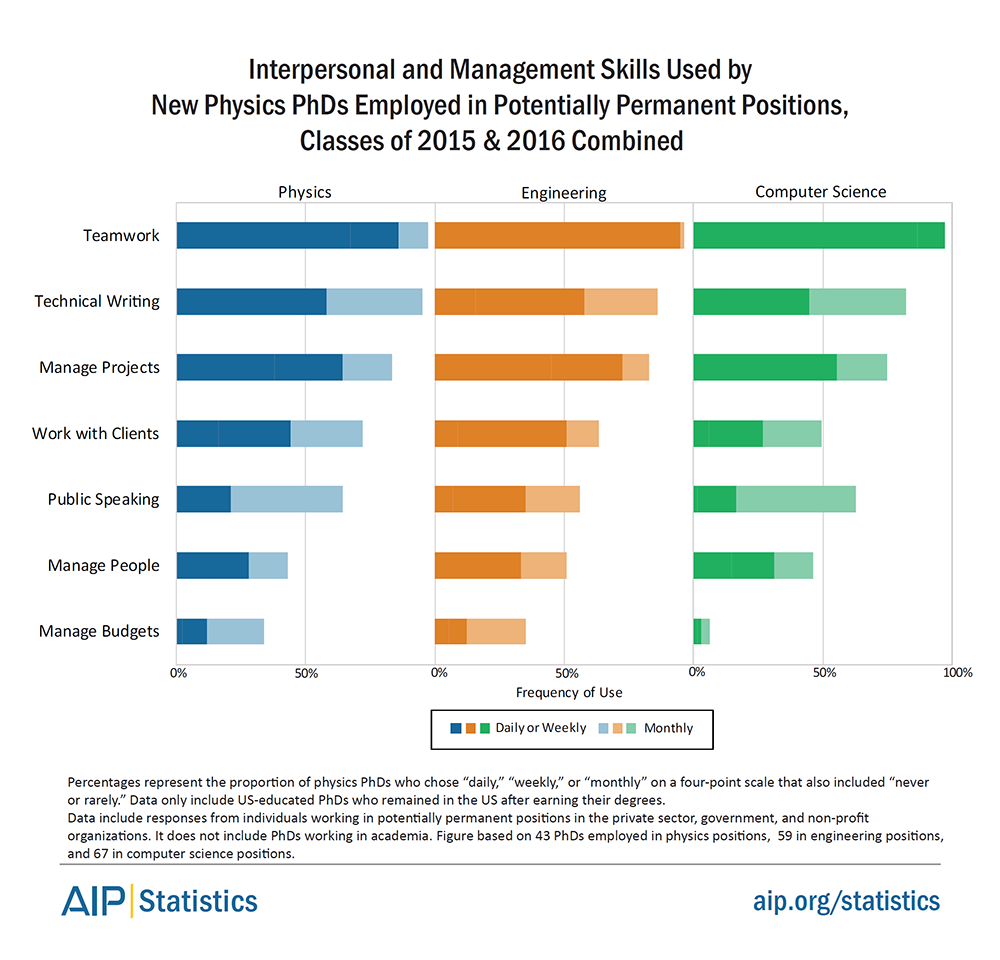 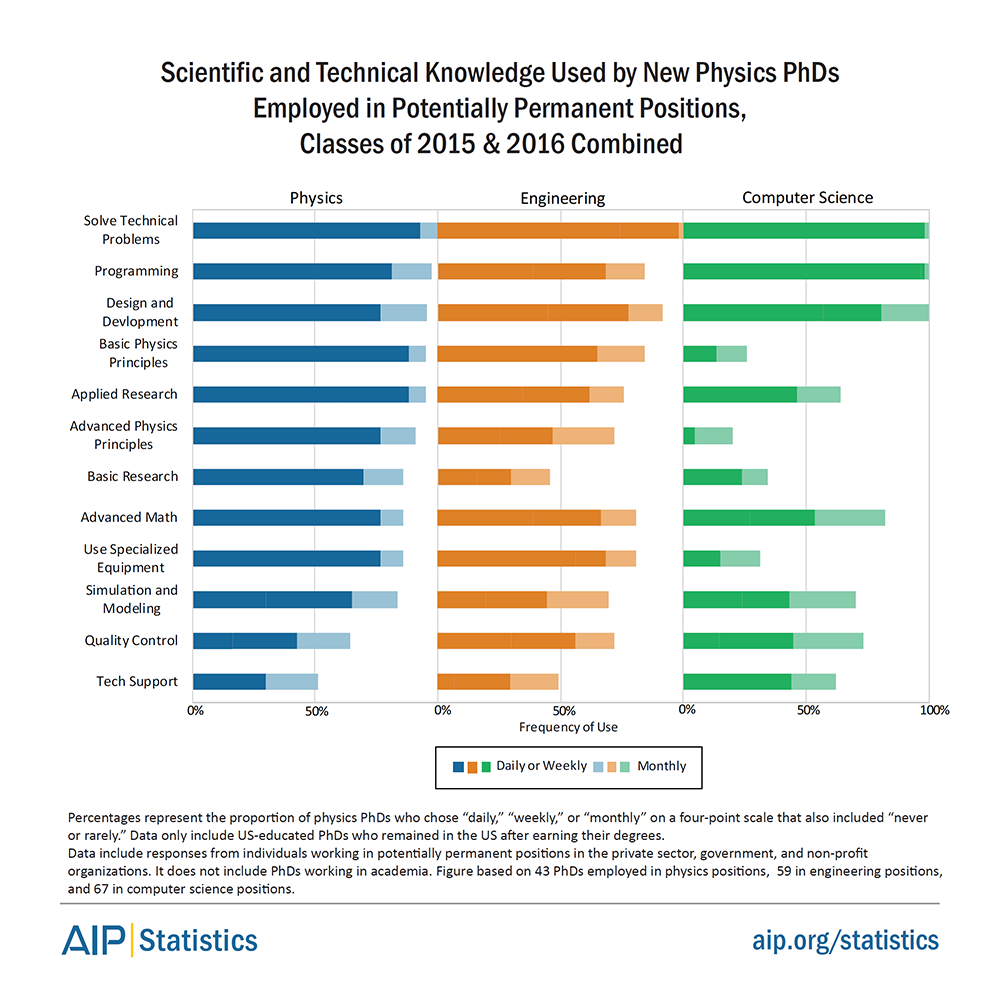 We asked new physics PhDs four questions regarding how they felt about the positions they held in the winter following the receipt of their degrees. These subjective, self-assessed aspects of their positions give some insight into how new PhDs perceived their post-degree employment. Overwhelmingly, PhDs had a positive attitude concerning their initial employment.

Regardless of sector of employment, physics PhDs in potentially permanent positions reported similar levels of satisfaction and challenge with their positions and felt that their PhD was an appropriate background for the position they held (see Table 2). 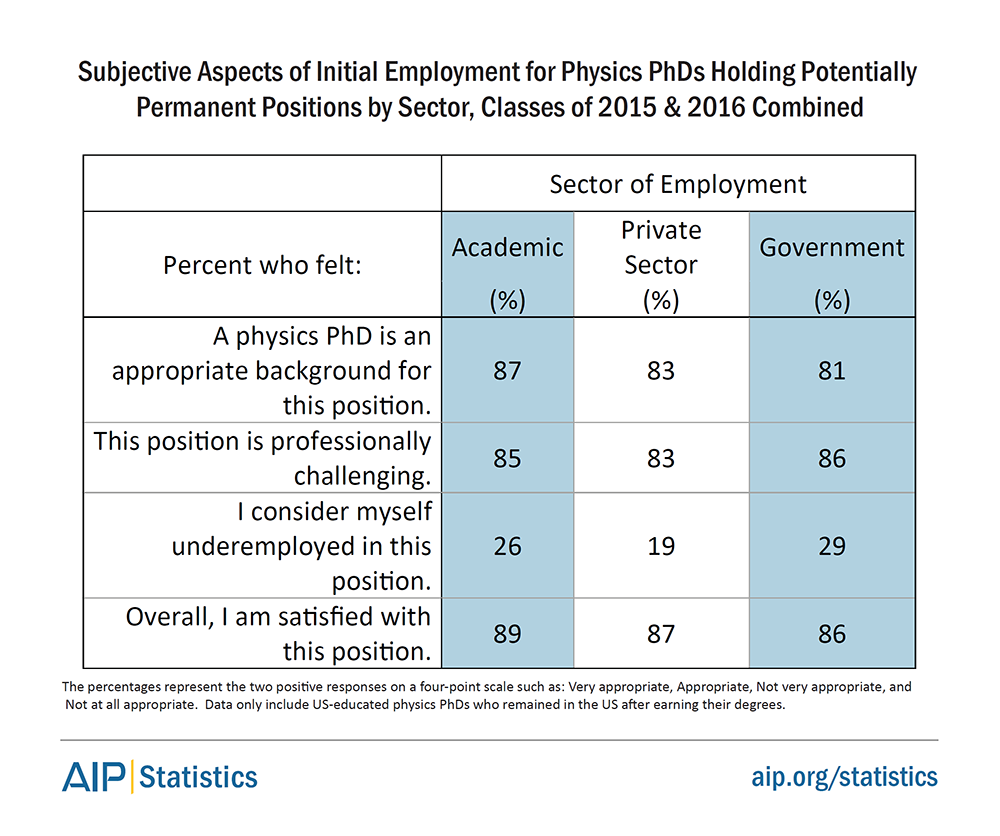 Table 3 looks at new PhDs holding nonacademic potentially permanent positions by field of employment. Unsurprisingly, individuals who were working in the field of physics were more likely to indicate that a physics PhD was an appropriate background for their position. Although PhDs working in potentially permanent positions in the field of computer software were more likely than those working in physics or engineering to report that they considered themselves underemployed, they reported the highest levels of overall satisfaction with their positions. 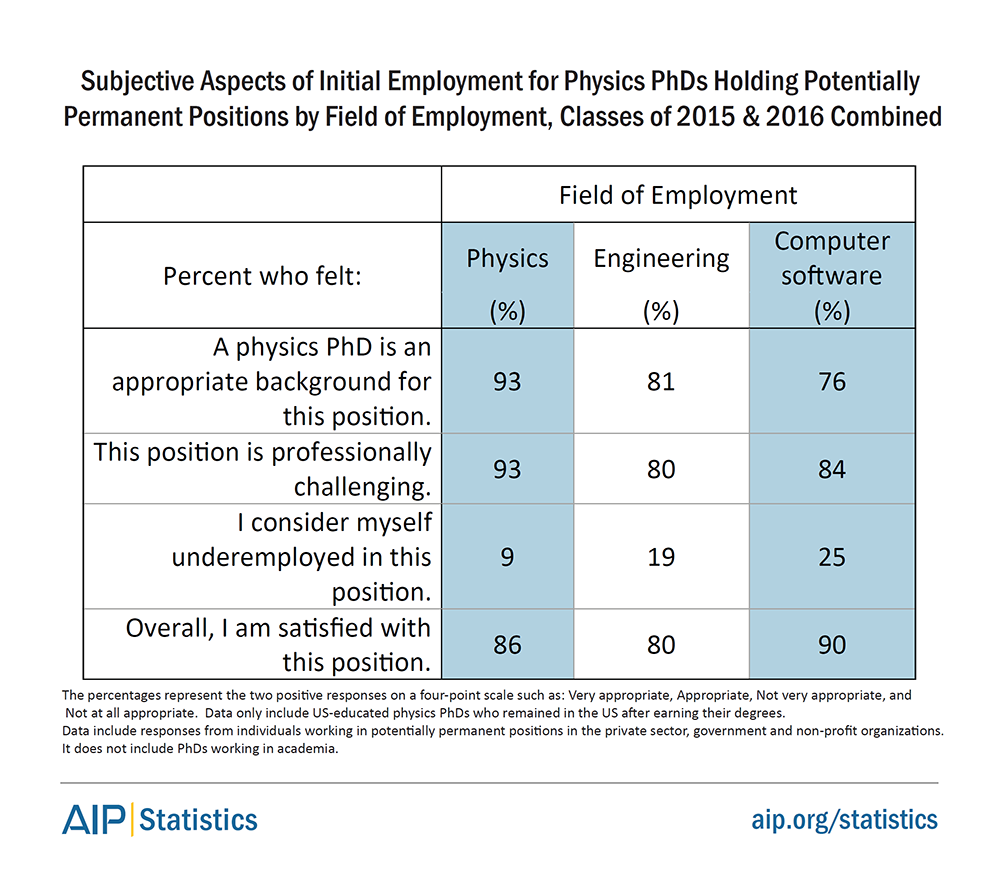 As new degree recipients prepare to transition into the workforce, the guidance that they receive from their advisors can help shape their post-degree experiences. More than four-fifths of postdoc holders reported that their advisor was helpful in planning their career, compared to just over half of those employed in potentially permanent positions (see Figure 6). One possible explanation for this difference is that university faculty advisors generally have more networking opportunities and collaboration with colleagues at other universities and labs than they do with individuals working in the private sector. Three-quarters of the new PhDs working in potentially permanent positions were employed in the private sector. 1 Unemployed physics PhDs were much more likely than their peers to report that their advisor was not helpful with career planning. 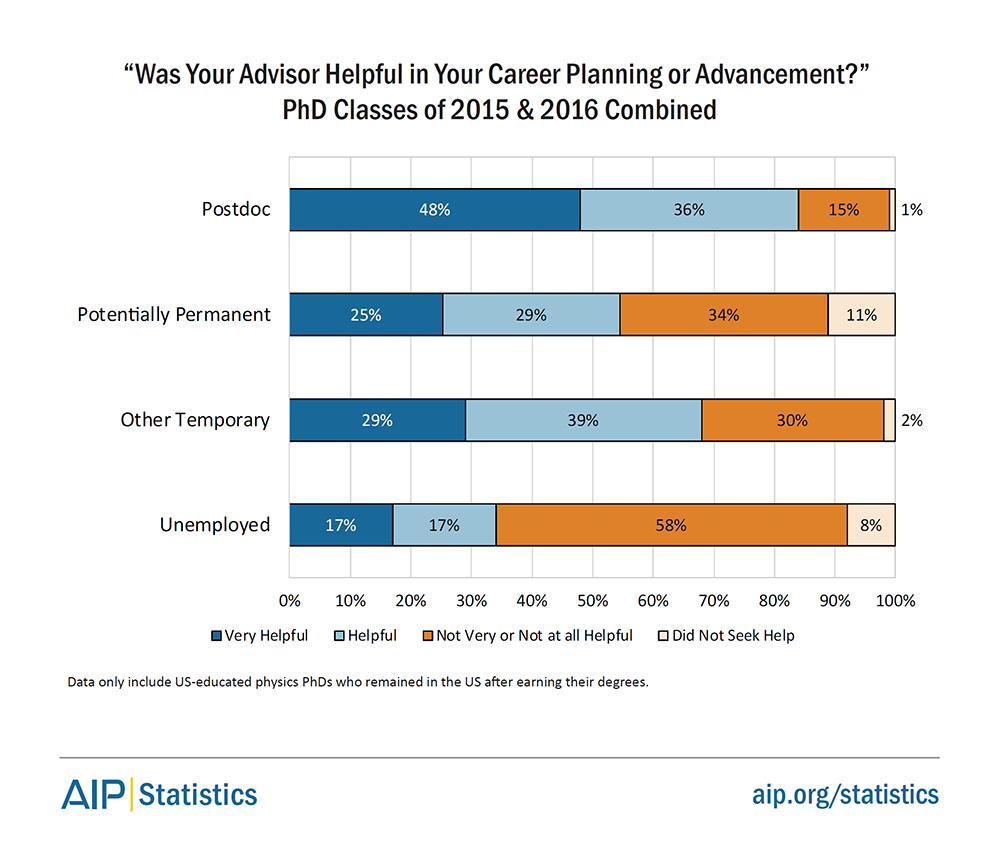 New PhDs holding postdoctoral appointments were specifically asked about their postdoc-related experiences. Physics PhDs in postdocs have a unique opportunity to continue to develop important skills and experience before transitioning to potentially permanent employment. Almost all (95%) of the postdoc holders felt that the knowledge and skills they were developing in the positions they held would be valuable in their future career pursuits (see Table 4). More than four-fifths of postdocs (85%) indicated that they were pleased with the amount of mentoring they were receiving. 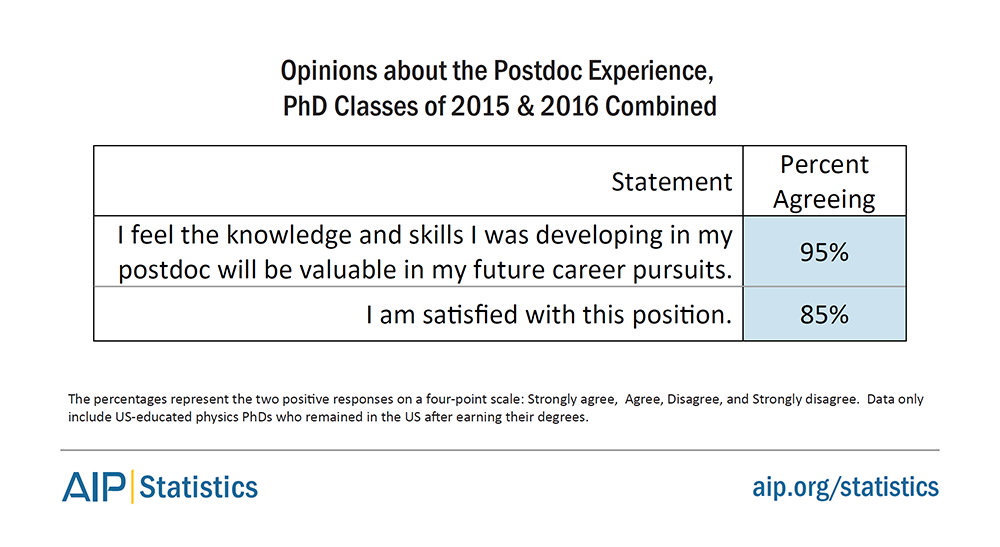 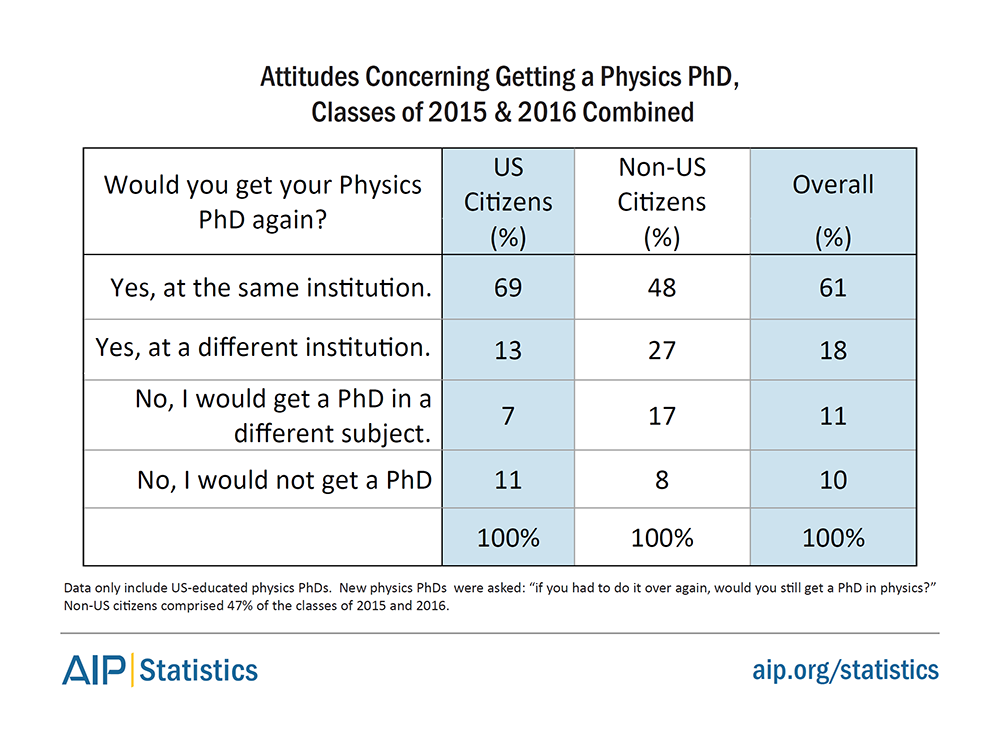 As shown in Table 6, new physics PhD’s reflection of whether they would repeat getting a physics PhD if given the opportunity is related to their initial post-degree employment situation. Physics PhDs employed in postdocs were more likely to report that they would repeat their PhD than PhDs holding other employment types. Physics PhDs who held other temporary positions or were unemployed were more likely to report that they would not get a PhD at all than those holding the other two types of employment, with over a quarter of unemployed PhDs choosing this response. 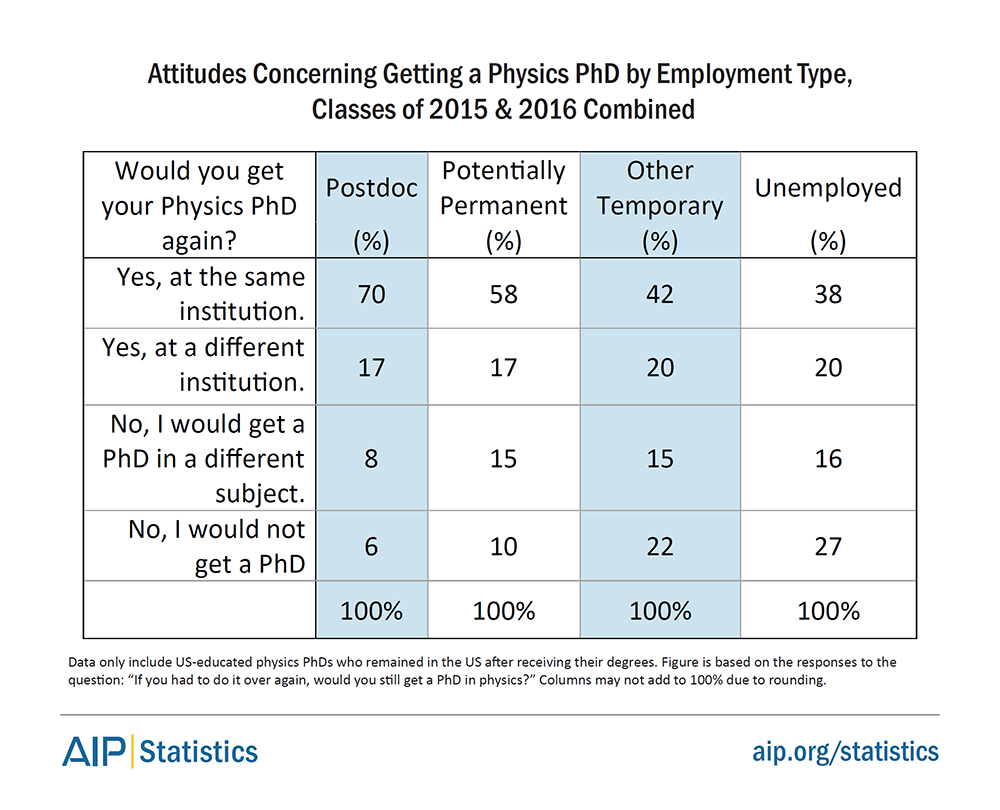 Each fall the Statistical Research Center conducts a Survey of Enrollments and Degrees, which asks all degree-granting physics and astronomy departments in the United States to provide information concerning the number of students they have enrolled and counts of recent degree recipients. At the same time, we ask for the names and contact information for recent degree recipients. This degree recipient information is used to conduct our follow-up survey in the winter following the academic year in which respondents received their degrees. The post-degree outcome data in this Focus On come from that survey.

Recent degree recipients can be difficult to reach because they tend to relocate after receiving their degrees. Departments often do not provide or do not have accurate contact information for their alumni. To assist us in determining outcome information and to help obtain updated contact information, we contact the advisors of nonresponding degree recipients. The information obtained from the advisors is limited to citizenship, gender, employment status, sector of employment, location (in or out of the United States), and subfield of dissertation for the PhDs.

The follow-up surveys for the classes of 2015 and 2016 were administered in a web-based format. Those who did not respond were contacted up to five times with invitations to participate in the survey. The physics PhD classes of 2015 and 2016 consisted of 1,860 and 1,819 graduates, respectively. We received post-degree information on 44% of these degree recipients.

Thirty-five percent of these responses contained the limited information that we were able to gather from the student’s advisors, the other 65% of these responses came from the PhD recipients themselves. With the exception of Figure 1 this report is based on responses from this latter group.

With the exception of Table 5, PhDs who left the United States after receiving their degrees were not included in the analysis.

All differences discussed in the text were tested and found to be statistically significant.

The Statistical Research Center is your source for data on education and employment in physics, astronomy, and other physical sciences. Follow us at @AIP_Stats.