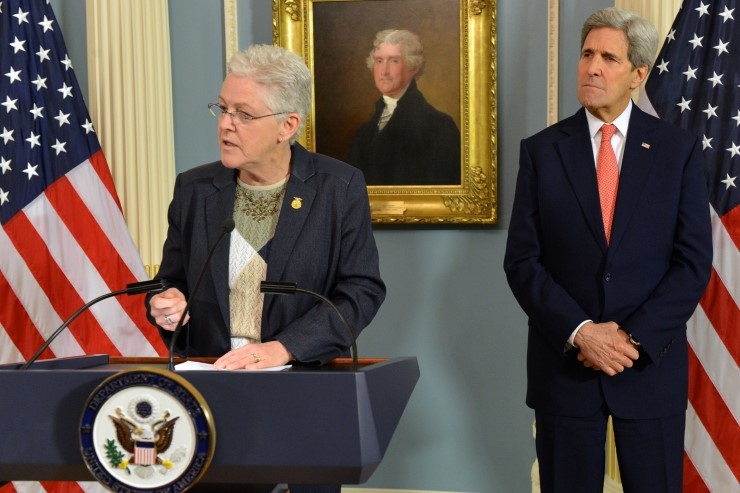 Then-EPA Administrator Gina McCarthy and Secretary of State John Kerry in 2015. They will respectively serve as top advisors on domestic and international climate policy in the Biden administration.

With one week remaining until his inauguration, President-elect Biden has already selected senior members of his administration who will shape its strategy for addressing climate change. Adding to his early announcement of former Democratic senator and secretary of state John Kerry as special climate envoy, Biden’s team now includes a “national climate advisor” focused on domestic policy and nominees to lead the Environmental Protection Agency and the Departments of Energy and the Interior. Other Cabinet nominees and White House staff members named this month also have experience in climate policy.

Together, this group is expected to immediately begin reversing Trump administration actions that unwound climate-related policies, regulations, and international agreements spearheaded by the Obama administration. However, members of Biden’s transition team have warned that progress may be hampered because the Trump administration has cut program budgets and many agency experts have left.

Meanwhile, Trump appointees are racing to leave additional roadblocks to prevent the Biden administration from reversing its climate and environment policies, including a just-announced EPA rule that aims to restrict the regulation of industrial greenhouse gas emissions from sources beyond power plants. The transition team has indicated Biden will issue a memo immediately after taking office ordering agencies to “halt, or delay, midnight regulations.”

To serve as national climate advisor, Biden has chosen former EPA Administrator Gina McCarthy, who will also lead a newly established White House Office of Domestic Climate Policy. Her role is intended to function as a counterpart to Kerry’s internationally focused position.

For the past year, McCarthy has been president and CEO of the Natural Resources Defense Council, a nonprofit advocacy group, which she joined after spending most of the Trump administration at Harvard University following her four years leading Obama’s EPA. At the agency, McCarthy oversaw implementation of the 2015 Clean Power Plan, which set national carbon emissions standards for existing power plants. The Trump administration has since replaced the plan with the more lenient Affordable Clean Energy Rule and pulled back on a variety of other EPA regulations. For her part, McCarthy has been a vocal critic of these actions, calling them detrimental to public health.

In an interview last January, McCarthy discussed her views on climate policy, saying, “There is still, I think, a continued need to keep our eye on the prize, and our eye on the prize is that we need to reduce fossil fuels. We need to go to clean energy, not cleaner energy.”

Speaking about her new role last month, McCarthy said she will focus on “marshaling every part of our government, working directly with communities, and harnessing the forces of science — and the values of environmental justice — to build a better future for … generations of Americans to come.”

McCarthy’s deputy will be Ali Zaidi, who was associate director for natural resources, energy, and science in the White House Office of Management and Budget under Obama, and is currently a top energy policy aide for the governor of New York. Accepting his new role, Zaidi pointed to the potential intersecting benefits of climate action, remarking, “Revving up manufacturing and innovation, spurring good-paying union jobs, and advancing justice [are] long overdue.”

Today, the transition team announced four additional staff members for McCarthy’s office as well as a senior director for environmental justice at the White House Council on Environmental Quality. Jeff Marootian, who currently leads the District of Columbia Department of Transportation, was also named as a special assistant to the president for climate and science agency personnel in the Presidential Personnel Office.

The Biden team has yet to name support staff for Kerry, but they will reportedly be housed at the State Department. As a member of the National Security Council, Kerry is also expected to leverage its staff as well. Last week, Biden named environmental lawyer Melanie Nakagawa, who advised Kerry on climate when he was secretary of state, as the council’s senior director for climate and energy.

At the same event where Biden named McCarthy as a member of his White House team, he also introduced his nominees to lead the Department of Energy, Department of the Interior, EPA, and the Council on Environmental Quality as part of his administration’s broader “climate team.”

Biden’s nominee for energy secretary, former Michigan Gov. Jennifer Granholm (D), has argued for the past decade that DOE should play a major role in spurring regional economic development, pointing to the role the department played in her state’s response to the 2008 economic crisis. Recounting those efforts after Biden selected her, Granholm remarked that she has become “obsessed with creating good-paying jobs in America in a global economy [and] obsessed with seizing the opportunities that a clean energy future will provide for American workers.”

Interior secretary nominee Rep. Deb Haaland (D-NM) has served in Congress and as a member of the House Natural Resources Committee since 2019. Previously she worked as a business administrator and political organizer within New Mexico’s Laguna Pueblo community, of which she is a member. Pending her confirmation, Haaland will be the first Native American to lead the department, which is responsible for managing federal lands as well as U.S. relations with tribal governments. Accepting Biden’s nomination, Haaland said she would ensure the department’s decision-making will “once again be driven by science” and engage diverse stakeholder communities. Under the Trump administration, the department has downplayed climate change and some employees have reported they were treated hostilely when they sought to address the subject.

Biden’s choice for EPA administrator, Michael Regan, currently serves as head of North Carolina’s Department of Environmental Quality. He previously worked as a career EPA air quality official under the Bill Clinton and George W. Bush administrations. At the nomination event, Regan emphasized his interest in addressing geographical and racial disparities in environmental pollution, pointing to the “plight of fenceline communities.”

To serve as chair of the Council on Environmental Quality, Biden has picked Brenda Mallory, who currently is director of regulatory policy at the Southern Environmental Law Center. She has previously served as a top lawyer at EPA and as CEQ’s chief counsel and, pending her confirmation, will be the first Black woman to lead the office.

Biden has yet to name leaders for agencies and offices with direct responsibility for climate science, most notably NASA, the National Oceanic and Atmospheric Administration, and White House Office of Science and Technology Policy. President Obama’s pick for OSTP director, John Holdren, had a background in climate science and policy, but Biden has not yet named his choice for the role or indicated if the position will be central to his climate efforts. In any event, the Biden administration is likely to quickly name a new leader for the interagency U.S. Global Change Research Program, which OSTP oversees, as late last year the Trump administration replaced its executive director with fringe climatologist David Legates, who was removed from the job this week.

In naming some of his nominees for Cabinet and White House positions outside his “climate team,” Biden has selected individuals who have engaged substantially with climate policy. Notably, his pick to lead the Commerce Department, which oversees NOAA, is current Rhode Island Gov. Gina Raimondo (D), who has set a goal for her state’s electricity to be completely generated from renewable sources by 2030. Biden’s choice for labor secretary, Boston Mayor Marty Walsh (D), is the current chair of Climate Mayors, a group of nearly 500 mayors seeking to demonstrate local climate leadership.

Brian Deese, the incoming director of the National Economic Council, worked as a top aide to Kerry during the negotiations over the Paris Agreement and later joined the financial giant BlackRock as global head of sustainable investing. Announcing Deese’s appointment, Biden remarked, “If we are going to tackle the climate crisis, then solutions must be woven into every aspect of our economic policy.”