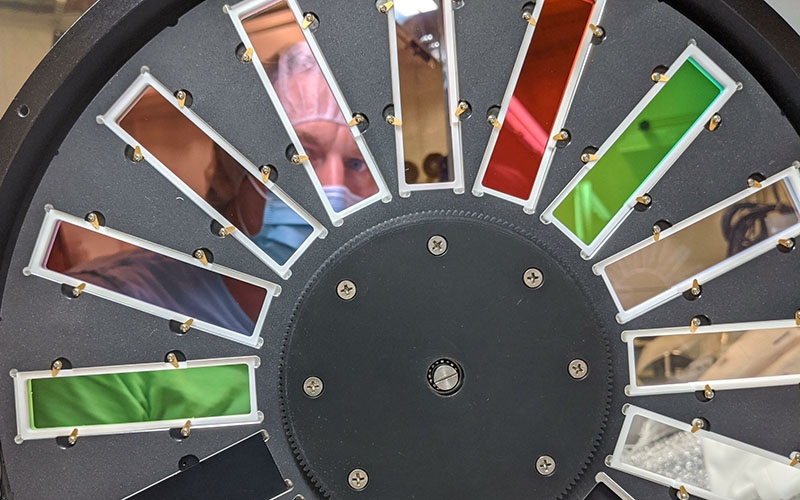 During the 117th Congress, lawmakers passed the Infrastructure Investment and Jobs Act, Inflation Reduction Act, and CHIPS and Science Act, coupling new support for R&D to an ambitious program of industrial development, particularly in clean energy and semiconductors. The bills also committed hundreds of billions of dollars to these initiatives, protecting them from the vagaries of the annual appropriations process and setting the stage for an implementation campaign of historic scale.

This year, Congress’ period of unusual productivity is expected to come to a grinding halt amid partisan gridlock, threatening to create serious headwinds for science programs that depend on annual appropriations. Nevertheless, there are likely to be a range of new policy developments in fast-moving areas such as the technological rivalry between the U.S. and China, biotechnology, and fusion energy. And as always, there will be surprises.

With funding in hand from the legislation of the last two years, the Biden administration is starting to launch the R&D programs, large-scale technology demonstrations, and deployment incentives those laws call for. It will be years before the success of these efforts can be gauged, but serious challenges will confront them immediately. These include building up capacity within the Departments of Energy and Commerce to administer the funding, selecting viable projects to receive it, and ensuring those projects are well managed. More broadly, the initiatives will test the possibilities of industrial policy, in which the government actively leverages technology to promote economic transformation. The administration already has many instances of private follow-on investment to cite and it hopes to safeguard those investments by building “ecosystems” that connect R&D with manufacturing and that supply needed financing, tools, materials, components, and workers. While some of this funding received bipartisan backing, Republicans have stated they will be closely watching these initiatives for signs of policy failure.

With Republicans holding a narrow House majority, the party’s far-right flank has gained leverage to push for steep cuts in federal spending. Because President Biden and the Senate are unlikely to accede, House Republicans are preparing to provoke high-stakes standoffs. The Treasury is already taking special measures to avoid breaching the statutory debt limit and a crisis will arrive by summer if Congress does not raise it, with unknown but potentially disastrous economic consequences. After that, Congress must appropriate funding for fiscal year 2024, which starts Oct. 1, or the government will shut down. Science agencies would be hit directly by funding disruptions and indirectly by economic troubles, as they already have been by recent inflation and supply-chain disruptions. In any case, the push for budgetary restraint suggests Congress faces an uphill political climb to meet the science budget targets in the CHIPS and Science Act. Absent more funding, ambitions for new marquee initiatives such as the National Science Foundation’s Technology, Innovation, and Partnerships Directorate and the Commerce Department’s regional technology hub program will have to be reined in.

The new House Science Committee chair, Rep. Frank Lucas (R-OK), was its top Republican the past four years and maintained generally cordial relations with the Democratic majority, including on previously contentious subjects such as climate science. Lucas indicates he wants to continue in a bipartisan spirit and has already announced plans for legislation reestablishing the National Oceanic and Atmospheric Administration as an independent agency, which would need Democrats’ cooperation to become law. However, he and other committee Republicans have also been planting seeds for aggressive oversight of the White House Office of Science and Technology Policy as well as the ambitious clean energy initiatives being launched by the Department of Energy. Lucas was also a major player behind an ultimately unsuccessful campaign to reconfigure the Environmental Protection Agency’s science advisory boards and to constrain what types of scientific information EPA may use to justify regulations. For committee Democrats, this will be the first time since 2010 they are not led by now-retired Rep. Eddie Bernice Johnson (D-TX). Her successor Rep. Zoe Lofgren (D-CA) is a longtime member of the committee who will now have an opportunity to steer its agenda.

US seeks ‘as large a lead as possible’ in critical technologies

The Biden administration declared last fall that in restricting technological exchange with rival nations it will seek to “maintain as large a lead as possible” in critical areas, discarding the previous “sliding scale” approach that sought only to give the U.S. a relative advantage. The administration soon levied sweeping limits on exports of advanced semiconductor technologies to China, citing their application to China’s military and human rights abuses. Now it is preparing new controls on quantum computers and designing a process to restrict U.S. financing of critical technologies abroad. The U.S. is also pressuring friendly countries to follow its lead and the Netherlands and Japan are reportedly close to curbing semiconductor exports to China, though their controls may not be as broad as those of the U.S. At the same time, U.S. technology policy is facing pushback from some European leaders, who are chafing particularly against the subsidies and domestic manufacturing requirements the U.S. is placing on clean-energy technologies, raising the prospect of a subsidy race.

Research security after the China Initiative

U.S. research security policy is starting to move past the high-profile criminal cases the Justice Department brought against academics through its “China Initiative.” Prosecutors frequently failed to convince judges and jurors of their cases, with one federal judge declining just this week to sentence chemist Franklin Tao to prison time. However, science agencies will continue to search for undisclosed connections to China and other rival countries, and those investigations will unfold largely outside the public eye. To better monitor grantees’ connections and cut down on accidental nondisclosure, agencies are developing standardized disclosure forms for funding applicants. Asian American advocacy groups are in turn pressing them for clearer guidance on not only disclosure requirements but also how they gauge the severity of violations and ensure due process. Meanwhile, Congress is continuing to ratchet up restrictions, with the CHIPS and Science Act requiring agencies to prohibit grantees from participating in “malign” foreign talent recruitment programs. Further limits are likely to be proposed, including by a new House committee focused on competition with China.

U.S. particle physicists will chart a course for the next decade and beyond through a report due this fall from the Particle Physics Project Prioritization Panel (P5). Like the previous P5 study released in 2014, the report will propose a budget-constrained agenda for federal agencies to pursue. The 30-member panel will hold its first meeting next month and draw heavily on input provided by the research community through the “Snowmass” summer study, which has just released a summary report. That report concludes that the five “science drivers” identified by the last P5 remain relevant and recommends a new focus on precision measurements of rare processes. Looking ahead to the post-2035 timeframe, it proposes the U.S. prepare to “participate in or build” an electron-positron “Higgs factory,” a subsequent high-energy muon or hadron collider, and a next-generation gravitational wave observatory. Other inputs to the P5 process include an international benchmarking exercise that will conclude this year and a National Academies survey set to finish in 2024.

Last month’s achievement of fusion ignition by Lawrence Livermore National Lab has stoked public interest in the prospects of fusion power plants, despite lab leaders cautioning the prospect remains distant. Fusion advocates hope to channel the interest into further government support for the field, building on the billions of dollars of private investments secured in recent years with the aspiration of bringing fusion power to the grid as early as the 2030s. Much of this money is for magnetic confinement fusion ventures, generally viewed as a more promising path to commercial energy generation than the laser-driven method used at Livermore. However, the world’s largest magnetic confinement experiment under construction, ITER, recently discovered major manufacturing flaws that may delay the project by years on top of a separate three-year delay expected because of the pandemic and supply-chain issues. Meanwhile, the Biden administration is anticipating that smaller fusion ventures might follow a quicker path to energy generation and Congress has started funding a new milestone-based development program to support the nascent industry.

The White House Office of Science and Technology Policy kept a low profile for much of last year after its director Eric Lander resigned in February following revelations he was verbally abusive to office staff. But OSTP has since begun to make major policy moves, such as an August directive that requires papers resulting from federally funded research to be made freely available upon publication, a tectonic shift that caught publishers generally by surprise. Arati Prabhakar was then confirmed in September as Lander’s successor, inheriting his place in President Biden’s Cabinet and the charge Biden gave him to reenvision the place of science, technology, and medicine in the U.S. The major science and technology policy legislation of the last two years has perhaps overtaken much of what such a vision might have set out, but Prabhakar will still have time to steer its implementation and put her own stamp on the role of presidential science adviser. She also faces more mundane tasks, such as finding new leaders to oversee the national security and health and life sciences portfolios in her office and recruiting for the role of U.S. chief technology officer, which has been vacant for two years.

The Biden administration’s efforts to promote equity and inclusion in STEM fields are coalescing, with the White House announcing last month the STEMM Opportunity Alliance, an initiative aiming to coordinate activities across public and private organizations. Among the efforts at federal agencies is the Department of Energy Office of Science’s RENEW program, which recently awarded $32 million to support training and mentorship programs, and its FAIR program, which will work to build research capacity at institutions that are historically underrepresented in the office’s portfolio. In addition, both DOE and the National Science Foundation are seeking to improve their grant merit review processes to better address societal impacts and equity concerns. Since the start of the current fiscal year, research proposals submitted to the Office of Science must include a Promoting Inclusive and Equitable Research (PIER) Plan that describes how their projects will promote equity, while NSF’s governing board plans to assess the efficacy of the “broader impacts” criteria the agency has long used when reviewing grant proposals.

Biotechnology will be a major focus for the Biden administration this year. The new Advanced Research Projects Agency for Health is poised to start work with a budget of $1.5 billion secured for the year and Renee Wegrzyn in place as agency director. ARPA–H has already begun recruiting its first cohort of program managers, but questions remain about how the agency will operate, particularly in developing an approach to innovation distinct from the National Institutes of Health, its parent agency. ARPA–H also still lacks a location for its headquarters, and Congress recently stipulated it cannot be colocated with NIH and must have offices in at least three geographic regions. Meanwhile, NIH itself is waiting for Biden to nominate a director to replace Francis Collins, who stepped down in late 2021 after leading the agency since 2009. Other developments this year will include the ramp up of the interagency National Biotechnology and Biomanufacturing Initiative, the launch of the newly formed National Security Commission on Emerging Biotechnology, and the creation of a White House Office of Pandemic Preparedness and Response Policy.