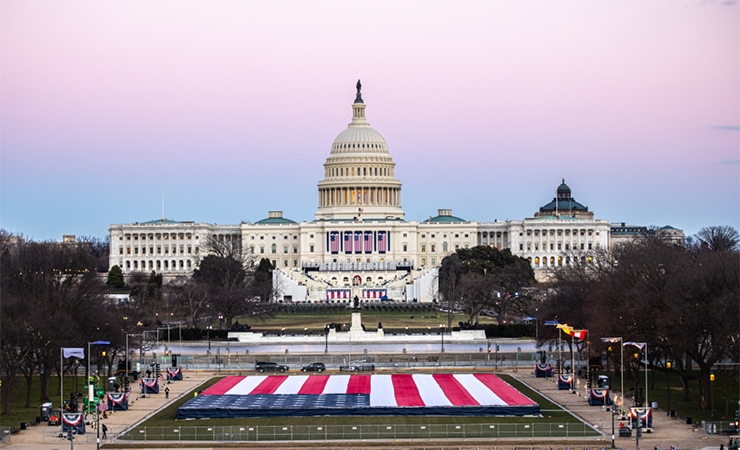 Although science policy often moves slowly, the arrival of the COVID-19 pandemic last year demonstrated how the landscape can be upended almost overnight. As 2021 gets underway, the pandemic recovery and the changeover in presidential administrations are promising to make for an eventful year, even apart from whatever new surprises may be in store.

President Biden’s team has pledged to ensure scientific expertise is applied across the government’s pandemic response and more broadly to “listen to the science” in all matters of governance. This broad focus on science may also add to the momentum building behind significantly expanding support for U.S. R&D. Dramatic shifts are certainly expected for areas such as climate research and immigration policy, though some areas of science policy may continue with little disruption.

The pandemic and its aftermath

Recovering from the pandemic will dominate the earliest days of the Biden administration, as it works to speed vaccinations, shore up public health measures, and provide economic relief. The response will also be a key area where the administration aims to showcase a general respect for science by foregrounding experts such as White House chief medical adviser Anthony Fauci. Meanwhile, as scientists seek a return to normality, university budget crunches threaten to reduce job opportunities, while those who have been hit harder by the pandemic, such as women, face daunting obstacles in keeping their careers on track. Federal science agencies will have to decide how they can alleviate disruptions to researchers they are currently supporting while also funding new projects. Congress has so far not provided relief funds for this purpose, but there has been bipartisan support for the idea, and Democrats have also proposed providing one-time funding boosts for research and scientific facilities as part of a broader economic stimulus measure. Longer-run consequences of the pandemic may include incorporating lessons learned from remote work in future long-distance collaborations and conferences, and the intensive mobilization of research around COVID-19 could heighten aspirations for open and problem-oriented research, for better or worse.

Between climate change and the pandemic, science has returned as a major theme in U.S. politics 12 years after President Obama famously pledged to “restore science to its rightful place.” Now, the Biden administration is restoring the position of presidential science advisor and elevating it to Cabinet status. Appointing geneticist Eric Lander to the role, Biden has challenged him to “refresh and reinvigorate our national science and technology strategy.” He has also named sociologist Alondra Nelson to a new, high-level position in the White House Office of Science and Technology Policy focused on “science and society.” Over the coming year, Lander, Nelson, and others in the White House will further define a vision for reforming the federal scientific enterprise and responding to problems such as the serial scientific integrity violations that occurred under the Trump administration, particularly in its pandemic response. They will also carve out a role in day-to-day decision-making, and establish working relationships with other policymaking components of the White House.

From the very beginning of the Trump administration, there was widespread anxiety within the scientific community over the integrity of government science and the status of science in the broader culture. In April 2017 tens of thousands participated in “March for Science'' events around the world. While the march was avowedly, if awkwardly, nonpartisan, by the 2020 election thousands of scientists and prominent scientific journals were in clear revolt against the president, with Science editor-in-chief Holden Thorp arguing such outspokenness was long overdue. With President Trump now out of office, the future of such activism is up for grabs. Social issues are a likely avenue for continued action, building on recent efforts to push science agencies and institutions to take stronger action on issues such as sexual harassment, diversity and inclusion, and racial injustice. Moves such as the American Physical Society’s decision last year to assess cities’ policing practices when selecting conference sites could become a blueprint for further action. Such activities may also harmonize with federal efforts, as Biden has frequently expressed concern for social and economic justice and has already ordered the launch of a government-wide “equity agenda.”

There is a burgeoning bipartisan political interest in undertaking major R&D initiatives to address climate change and bolster U.S. technology, particularly with respect to China. Initiatives in quantum information science, artificial intelligence, and microelectronics are already law, as is legislation calling for multibillion-dollar increases in energy R&D spending. And this year, Senate Majority Leader Chuck Schumer (D-NY) is in a stronger position to advance his proposal to multiply federal funding for strategic technologies. Actual funding for new initiatives could be provided via an economic stimulus package, an infrastructure initiative, or within agencies’ ordinary budgets, which are now free from the spending caps set by the Budget Control Act of 2011. Although Senate Republicans may seek to reignite national debt concerns and leverage the filibuster rule to restrain spending, Democrats and especially Senate Budget Committee Chair Bernie Sanders (I-VT) are apt to resist such pressure. Biden has already signaled that he regards deficit reduction as less important than economic relief. His first detailed proposals for R&D spending will come through his budget request for fiscal year 2022, due early this year.

As the year progresses, Biden will fill dozens of science leadership positions across the federal government. Figures familiar from the Obama administration are likely to take on some of these jobs. For instance, the first director of the Advanced Research Projects Agency–Energy, Arun Majumdar, is rumored to be in line for a high-level job at the Department of Energy. Biden has also shown a strong interest in making barrier-breaking appointments, and there has been speculation he will nominate a woman to lead NASA for the first time in its history. With Democrats regaining control of the Senate, the confirmation of nominees should move relatively quickly, but it is not uncommon for some nominations to take months to clear. Once in place, these leaders will push new initiatives and also decide whether to continue certain Trump administration priorities, such as former defense R&D head Michael Griffin’s intensive efforts to advance selected military technologies or former National Institute of Standards and Technology Director Walter Copan’s vision for modifying federal technology transfer policies.

Turning the page on climate

Biden is making climate change a higher priority than any previous administration, as reflected in his appointment of former EPA Administrator Gina McCarthy and former Secretary of State John Kerry to top-level climate positions. Biden has already mandated a fresh federal assessment of the social cost of carbon, and under his administration climate research and policy initiatives are set to become more tightly integrated across a broader range of science and non-science agencies. For instance, treasury secretary nominee Janet Yellen has said she plans to establish a climate team in her department. The administration is also likely to focus on improving climate science’s applicability to specific regions and economic sectors, including through the next National Climate Assessment, which began last year under suspicion the Trump administration would try to corrupt its processes. Biden could also opt to reinstate the “sustained” climate assessment, a mechanism disbanded under Trump that was intended as a way for stakeholders to engage more continuously with scientists.

Biden has ambitious plans to advance energy technology as a way of both addressing climate change and encouraging economic development. To move them forward, he has nominated former Michigan governor Jennifer Granholm to be energy secretary. Granholm is an advocate for electric vehicles and clean energy sources, but she will also be responsible for implementing the Energy Act of 2020, which envisions massively expanding DOE’s carbon capture programs and increasing support for advanced nuclear reactor technologies. Notably, the advanced reactor programs Biden is inheriting have already attained a significant foothold within DOE and the Department of Defense. Biden voiced support for advanced reactor technologies during the campaign, though he has not indicated how aggressively he will push ahead with them relative to other climate mitigation measures. Biden and Granholm will also inherit a fusion energy program pivoting toward work in support of a future U.S.-based fusion power industry. This is expected to include new support for independent ventures that are pursuing fusion energy on much smaller scales than ITER, the global flagship project that is the current focus of U.S. efforts.

Next steps in space science

While space science steered a steady course under Trump, the establishment of a new lunar science campaign did represent a significant shift, informed by the administration’s goals of returning astronauts to the Moon and fostering commercial space services. The campaign is scheduled to launch its first missions this year, and its model of using commercial robotic landers and integrating scientific and exploration goals could be expanded or contracted as Biden advances his own priorities. Earth science is expected to be one such priority, which could involve expedited work on the goals set by the field’s 2017 decadal survey. Astrophysics will also receive renewed attention as the long-awaited launch of the James Webb Space Telescope approaches and the new astrophysics decadal survey recommends long-term priorities. The survey will also chart a course for ground-based astronomy, which faces difficult choices in funding the operations of vanguard facilities, building the Thirty Meter Telescope in view of opposition from Native Hawaiians, mitigating interference from new satellite megaconstellations, and crafting a future for Puerto Rico’s Arecibo Observatory following the collapse of its iconic radio telescope.

With the international traffic of scientists and students badly disrupted by the pandemic, changes in immigration and visa policy have the potential to significantly shape the composition of the U.S. scientific workforce as things return to normal. Even before the pandemic, U.S. university leaders had raised concerns about widespread visa delays attributed to new vetting procedures, and called for the government to adopt a more welcoming stance toward international scholars. As expected, Biden has already begun reversing much of Trump’s restrictive approach to immigration — ending the ban on travel to the U.S. from certain countries, most with majority-Muslim populations, and restoring support for the Deferred Action on Childhood Arrivals (DACA) policy — which affected scientists alongside many others. As he revisits Trump’s restrictions on Chinese visitors specifically, Biden will face the dual pressures of maintaining good relations with the country’s scientific community while addressing bipartisan concerns that the Chinese government is exploiting the openness of the U.S. research system. Looking to the longer term, Biden has proposed broad-ranging immigration reform legislation that includes a provision to smooth the path for foreign STEM graduates of U.S. universities to remain in the country.

A lighter touch on research security?

Two years ago, the Justice Department launched a sweeping “China Initiative” to crack down on allegedly pervasive misappropriation of U.S.-funded research by the Chinese government. Since then, it has charged more than 25 U.S.-based and visiting researchers with federal crimes, and dozens more have been fired or sanctioned following investigations by the FBI and federal science agencies. These actions have unsettled many in the research community, especially given that many of the cases targeted failures to disclose connections to foreign entities rather than theft or espionage. Science agency leaders have attested the omissions involved serious and intentional subterfuge, but Asian American community groups and some university leaders argue that aggressive enforcement has stoked racial discrimination. Looking ahead, Biden has retained FBI Director Christopher Wray, a key proponent of the China Initiative, but a lighter-touch approach could still materialize. In recent months, the Justice Department has reportedly considered creating a grace period for scientists to rectify previously undisclosed foreign funding.